Alright, I think it’s fair to fully disclose why I stopped the Jackson County Big Year 2018 a month in. I’ve had two birders whom I respect considerably and whom have significant experience in birding Southern IL both question or received questions about my sightings of late.  I got an email from one of them:

“Just a word of caution. I’ve received several messages from birders across the state inquiring about ALL of your recent sightings. Dude, no offense, but people realize you’re fairly new to birding and finding something rare, every day or most every time you’re out, just doesn’t happen.  It doesn’t help your cause that you’ve admitted you are doing a Jackson County Big Year.   Just trying to offer you some advice. SLOW DOWN. Your list of questionable finds is growing leaps and bounds. That throws up flags in eBird but also in people’s minds.   Your best defense is get photos!  I know, sometimes that is quite difficult. But you could hush your naysayers with positive ID’s from photos you take.   I’ve had to do the same sort of thing back in my beginning days… (Trails off in an encouraging story)”.

Yeah, that was a terrifying thing to read at the beginning of the day. Birdwatching is my escapist hobby (other than writing).  If people don’t trust me… that’s not good. There’s another young birder in my state in whom no confidence is given, as he regularly reports the most unlikely birds.  It’s always been my goal to not end up like him, and today I realized how close I’m coming, in people’s minds, to ending up that way.

I’ve been doing this for two, three years.  I think that’s long enough to become overconfident in my ability to correctly identify a bird.  I’ve certainly been overconfident in my ability to correctly ID Red-tailed Hawk subspecies.  As a result, I’ve removed all records of those on eBird, except for the ones in which I have absolute confidence, witnesses, and/or photos.

I’ve made some mistakes, the most public of which was a Slaty-backed Gull retraction last month, twice, in the listserv, when I mistook two different gulls for the bird.   Back in December 2017 I also had to retract a Golden Eagle sighting, when a friend and I mistook an immature Bald Eagle for a Golden Eagle.  I’m sure neither of these retractions has helped my believability in any way.

There’s also a few records for which I have limited evidence- a recent, unusual LeConte’s Sparrow, a very early Lincoln’s Sparrow the day before the LeConte’s, a Greater Scaup a few days before that, and going back into last year, some of the more notable ones include Red Crossbills and Long-eared Owl in southern IL.  Now, I firmly believe that I saw all the aforementioned birds (or heard, in the case of the owl), but I can understand why people would doubt them.

Younger birders (those below the age of 30) are not generally trusted anyway.  That’s understandable- birdwatching is a hobby that is built on experience.  Those who are younger have less experience-even if they have sharper eyes and more acute hearing.  It’s a bit of stereotyping of which I’m not particularly fond.  That being said, I also make mistakes due to my lack of experience.  For instance, I reported a male Brewer’s Blackbird from a field with Rusty Blackbirds near one of the best spots for Rusty Blackbirds in the state (and a bad spot for Brewer’s Blackbird).  I forgot that midwinter-onwards, male Rusty Blackbirds can start to change into breeding plumage and resemble male Brewer’s Blackbirds.  (That sighting is now “blackbird sp.” on Ebird.)  I was told of this by another birder with much more experience.  Remembering when plumage changes occur is one of the thousands of little bits of information gained through experience (and extensive internet research).  While I’ve done much of the latter, I still need much of the former.

As of this writing, I was #3 on Ebird in Illinois for 2018.  I don’t know most of the people in the top 100, and they don’t know me.  I’ll be dropping ranks quickly when spring migration rolls around, but until then I’m this odd newer birder few people know up on the top.  (I’m up that high because I went from the top to the bottom of Illinois over winter break, and I’ve been out nearly every day in southern IL where there’s more wintering species than in most of the state.)

People trying to break records are also not trusted, since it’d be only too easy to lie about something in the on-your-honor system of bird records.

I tend to go birdwatching solo- this works best for me, as I don’t really have anyone to go with at present.  However, this also puts me in the position of being the only person witnessing what I see.  As a birder in my 20s, birding solo is a good way to be absolutely not trusted whatsoever.  Add to that a county big year, a few unusual sightings, and being #3 in number of species on Ebird in the state of Illinois for 2018 (so far), and you have the perfect combination for doubters.

To take the birder’s advice, I do plan to slow down.  I was tiring of the big year before all this blew up, as I like wandering around anywhere I want without regard to county lines and other political boundaries. Also, my school and work loads are only going to increase, and I won’t be able to handle trying to see every bird during migration, doing my job, and passing my classes at school at the same time.  This sudden development happening at the same time put several nails in a coffin that was already being built.

So- the steps I have taken/ plan to take. 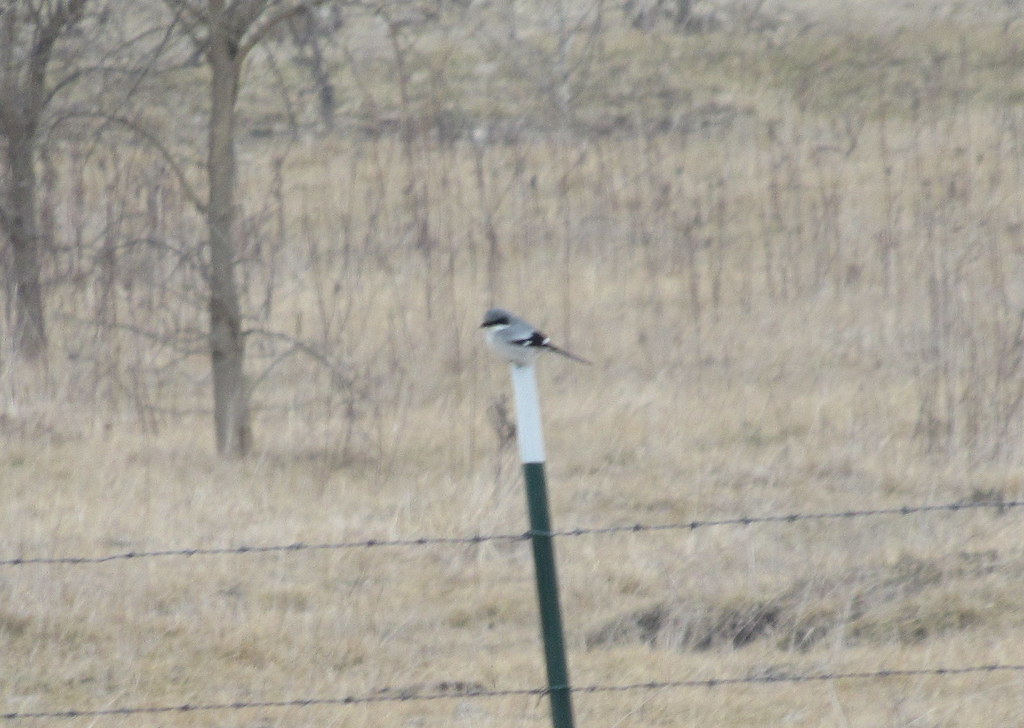 #1- Get more photos- I’m going to have a camera in hand more often, and get photos of more birds that I see.  It’s hard to argue with a photo. For instance, I saw a Loggerhead Shrike (Lanius ludovicianus) in a field in Randolph county recently.  I took a photo, and while it’s not a great photo, it shows that I saw the bird (one of my favorites, too!)

#2- End the Big Year- If I don’t have a reason to be constantly looking for new species, people might consider me more credible.

#3- Go birding with other birders- The more witnesses I have, the more trustworthy I am. Obviously these need to be witnesses with enough experience to correct me when I am wrong.  When, not if, because at some point I will be wrong.

#4- Avoid RTHA ssp.- This is a weak point for me, and I’m going to stop submitting them until I get more experience. I’ve gone back and removed a few of these, also.  I don’t think people realize this, but I do go back and remove records if I think I made a bad call after the fact.  I reported a Red-necked Grebe in December 2016 on Lake Springfield- I saw one November 2017 and realized the bird I’d seen was different enough that I couldn’t be sure of its identity.  So, I removed that record from Ebird, and from my life lists.  (Thankfully, I’ve seen Red-necked Grebes in Illinois since, albeit without a photo or witness… at least other birders saw them before and after I did!) 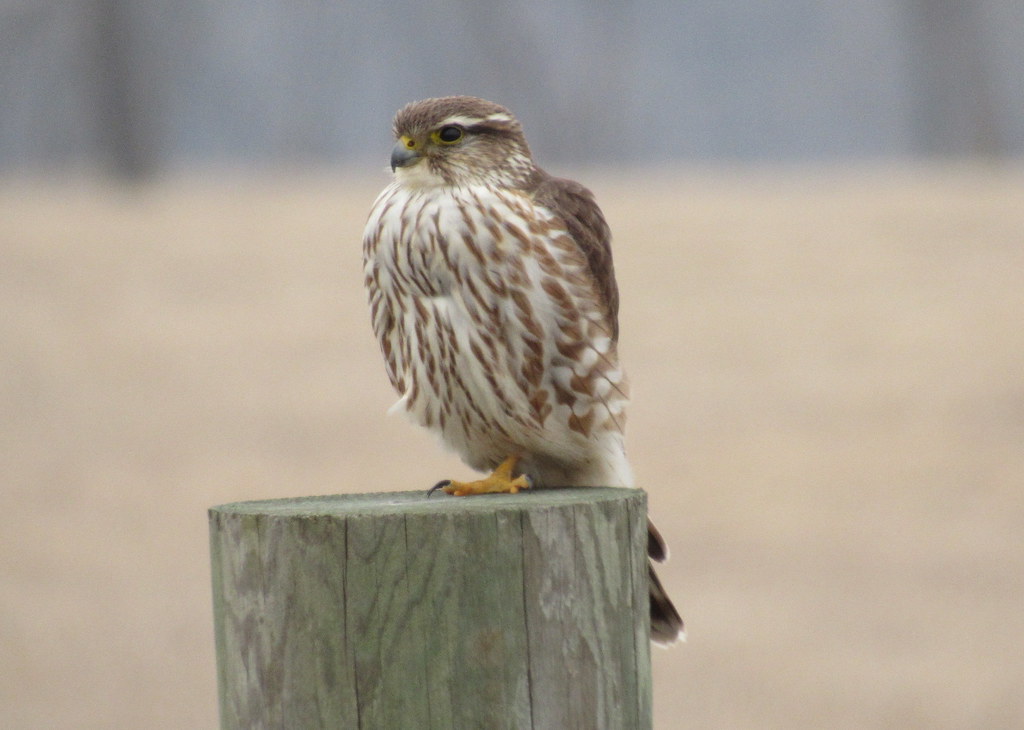 #5- Publicize my correct ID’s with photos – In order to ensure that I rebuild my reputation, I need to show that I have one worthy of rebuilding.  So, any rare birds I see that I have photos of are going on Facebook.  I started this recently, with this photo of a Taiga ssp. Merlin (Falco columbarius) above. Merlins are an uncommon falcon, and I saw two of them on this day- with witnesses, to be sure, but by putting photos out, I’m directly counteracting people who think I’m making stuff up.  Here’s the other one, a less common Prairie ssp. Merlin: 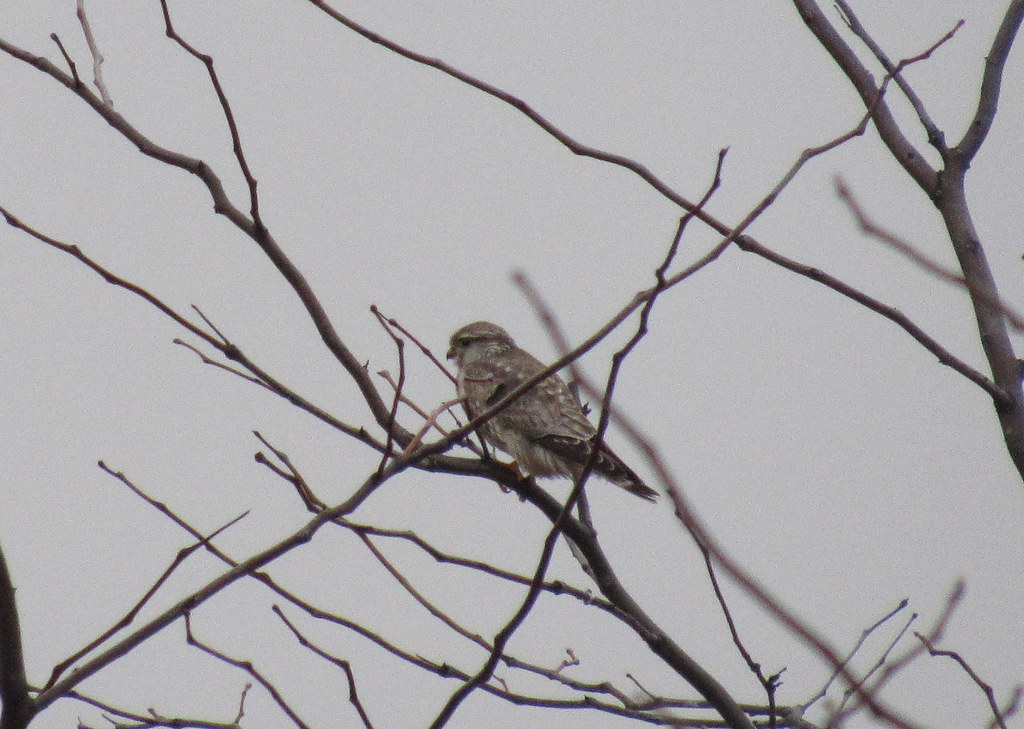 #6- Underestimate numbers of birds and use the “sp.” on Ebird-  If I’m not 100% sure of a bird, I need to put it as a vague species, like “sparrow sp.”  I do this on occasion, but not enough.  If it’s a flock of birds and the only ones I can see are X species, I tend to count them all as X species, even the ones that I didn’t look over as closely.   I also need to lower the numbers of birds I see.  I tend to count higher numbers than some people, because I have good eyes and ears and probably a bit of overconfidence in my ability to ID everything that flies my way.   However, if I lower my numbers so that they are in line with what’s expected (or even lower than that), I’ll still be reporting the birds I saw- just not all of them.  Think about it this way; there’s at least the lower number of birds that I put.  If I put a higher number and someone comes back to the spot and finds a lower number, they may believe that I overestimated the number in the first place.  If I put a lower number and someone comes back to the spot and finds a higher number, they know that I was right, plus extra.

I believe that if I do these six things for a considerable amount of time, people will trust me more.  Hopefully no more LeConte’s Sparrows come along and mess this up.  I really don’t want to find any rarities right now, for once in my life. That’s kind of a sad position to be in.

3 thoughts on “Why The Big Year Is Over”