Hey, I’m going to write a post without herps in it for once!  (There was a snake, but it was moved to a previous blogpost so the ophidiophobes [people afraid of snakes] could enjoy these again.  If you’re one of those people, just don’t go to prior posts from the last two months.) So, a couple weeks ago, I went up to visit my family in Central Illinois.  While there, I decided to talk both my parents into visiting Revis Hill Prairie Nature Preserve.  A prior expedition up there didn’t end well with Mom and I… we got lost for about 2-3 hours in brush and grasses well over our heads.  By comparison, scaling the loess (windblown sediment) cliffs below was a walk in the park. 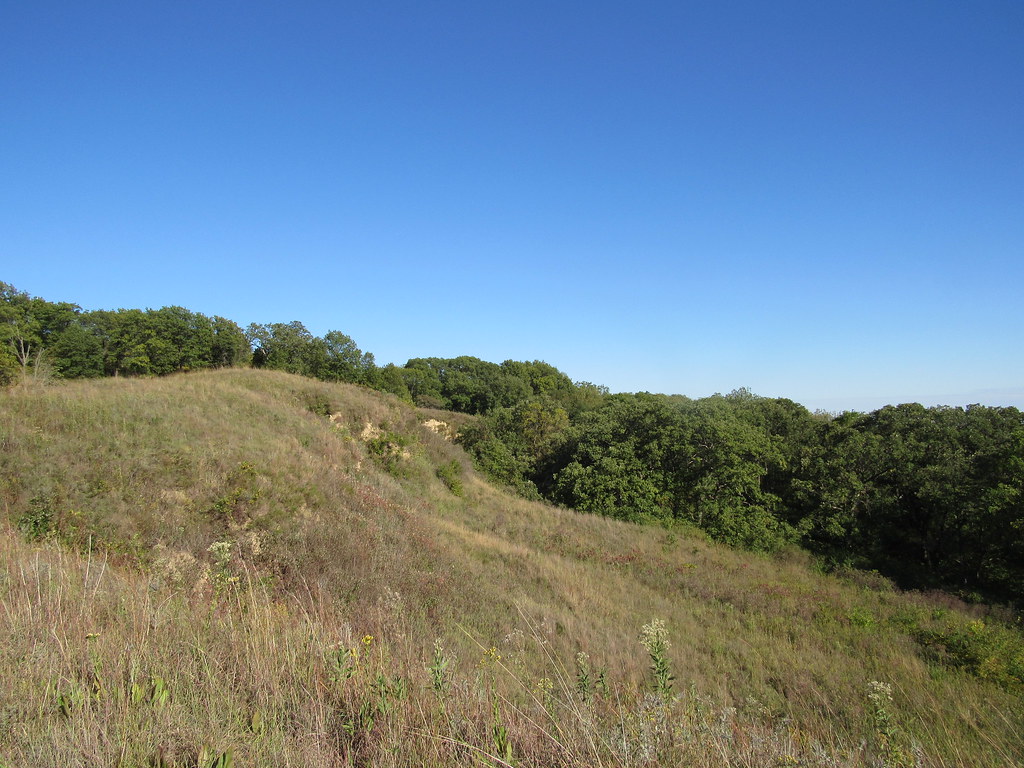 Oh, and last time Mom and I visited, which I didn’t write about because I took less than 20 photos and there wasn’t much to write about, we never ended up where the scenic views were.  Here, we did, and this is why I come back to such a challenging place time and time again: 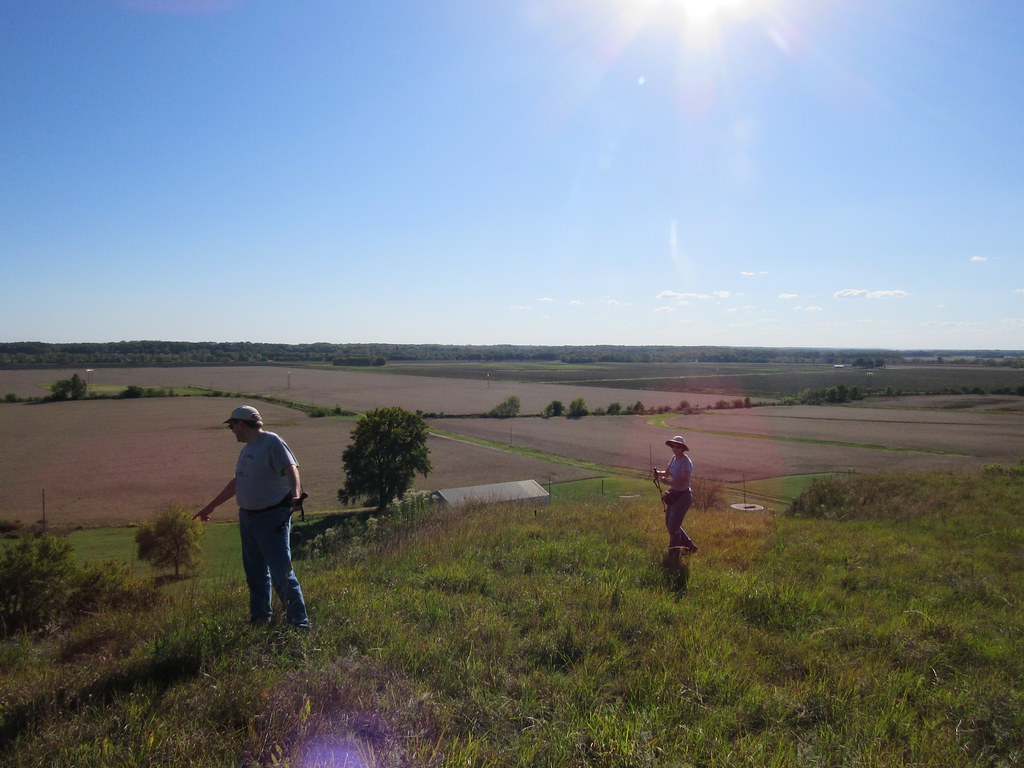 In a remote spot near this preserve, Great Plains Ladies’ Tresses (Spiranthes magnicamporum) bloomed a little, defying my attempts to get a photo.  My last flowering orchid of the year, I figured it would be my last orchid in Illinois for the year.  I was wrong, more on that in the future. 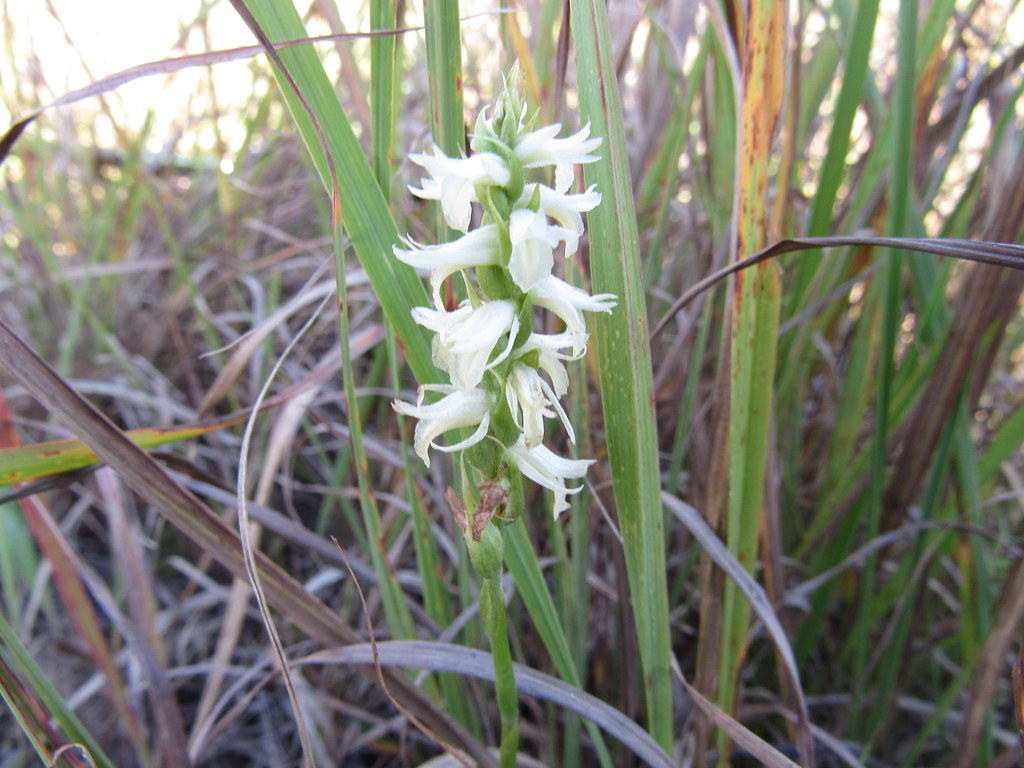 As we walked back to our car, on a route not back down the cliff, a route rather reminiscent of all the brush, vines and thorns Mom and I’d visited previously, we stumbled across one of my favorite Illinois invertebrates, an American Giant  Millipede (Narceus americanus), usually found in nicer-quality woodlands (at least, that’s where I find it).  Revis Hill Prairie Nature Preserve also has some old-growth ravine forests, which while not as interesting as the prairies visually, do contain a wide variety of birds and other animals. 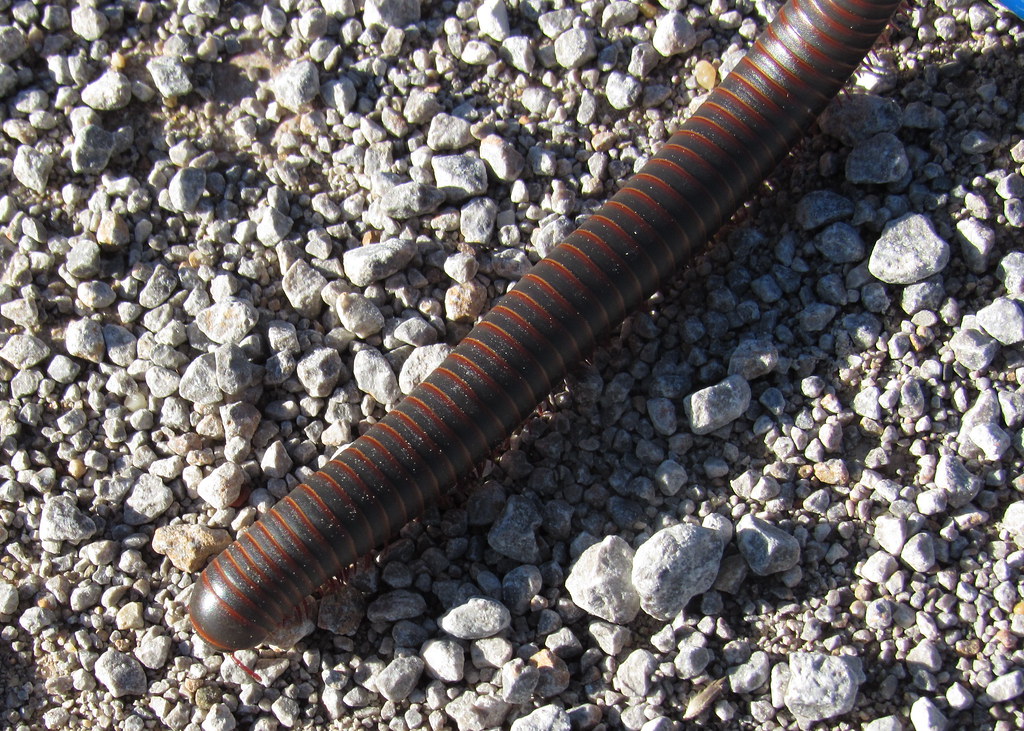 Speaking of great woodland birds, here’s a new one for the fall, a Yellow-bellied Sapsucker (Sphyrapicus varius).  These birds migrate south to overwinter in Illinois, because for them, Illinois is warm.  I suspect I’ll be seeing more of these as the year goes on. 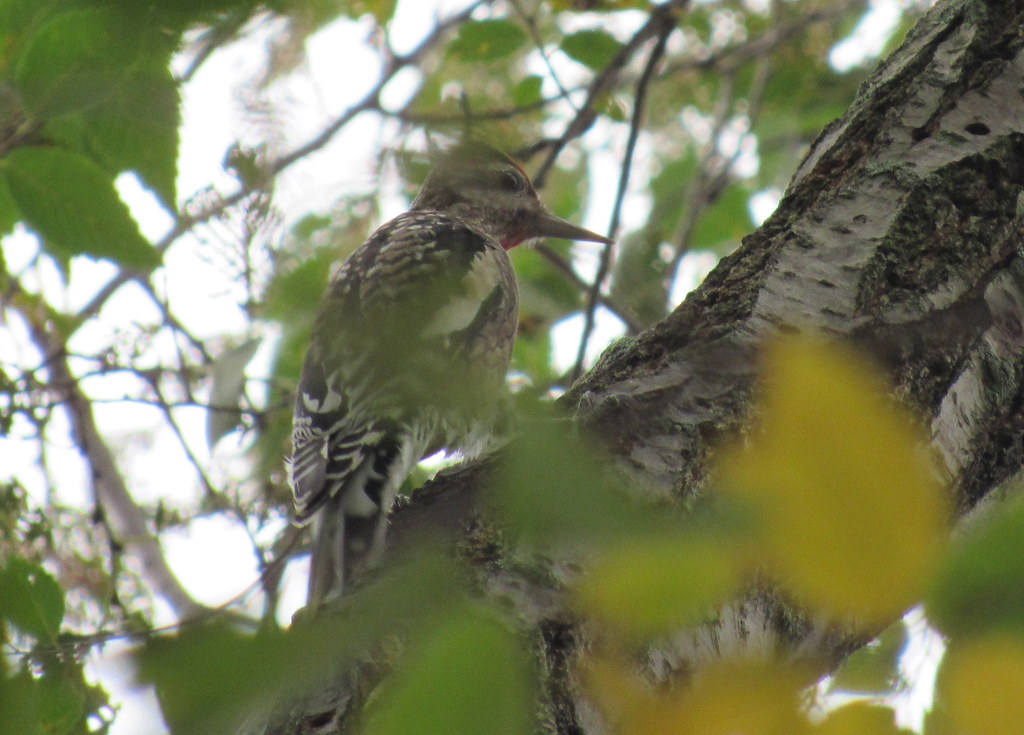 Sapsuckers are a type of woodpecker, just like this Downy Woodpecker (Dryobates pubescens): 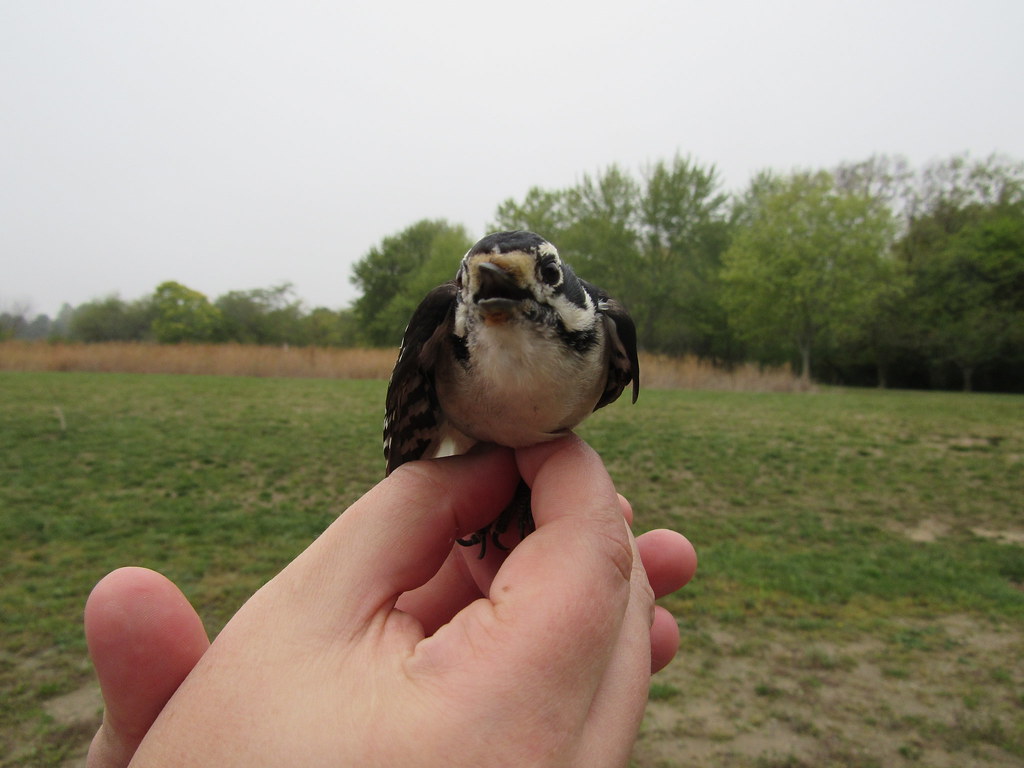 I’m sure people are wondering why this bird is being handled- it is, after all, illegal to pursue, hunt, take (which legally includes handle), capture, kill, or sell one of these birds under the Migratory Bird Treaty Act…. and without a waiver or permit that act applies to all but three of the United States of America’s birds.  (Those three are Rock Pigeon, House Sparrow and European Starling.)  However, in this case, the holder has a wavier- it’s bird banding! 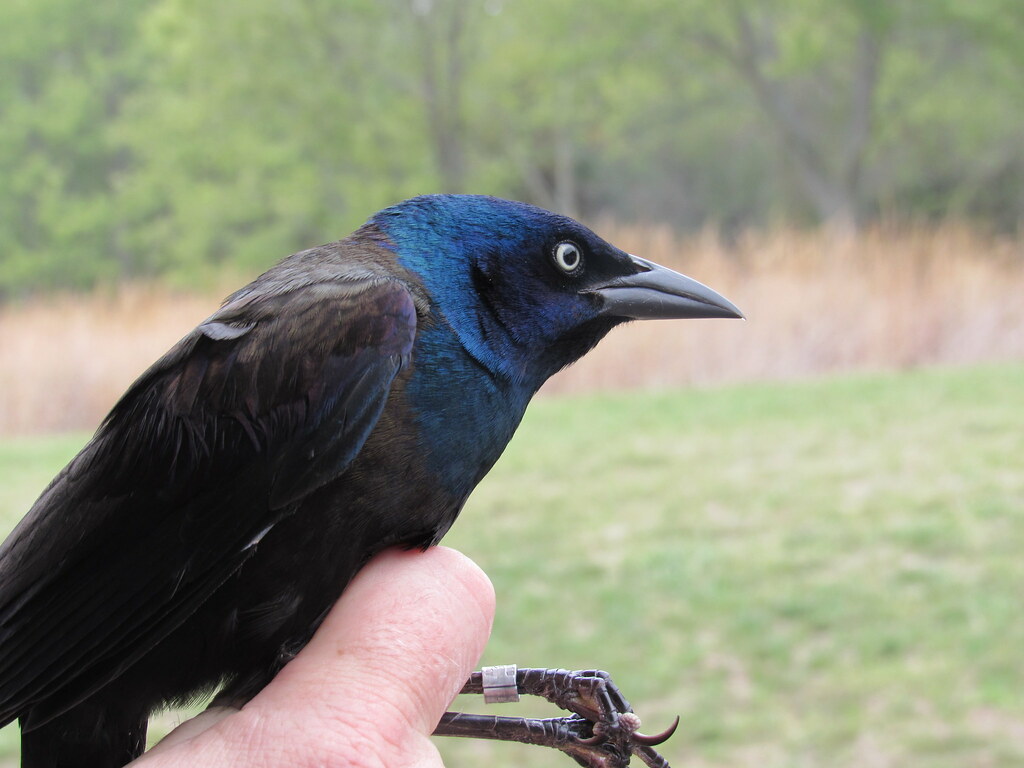 Bird banding involves the permitted legal capture of birds like this Common Grackle (Quiscalus quiscula) using safe methods by well-trained volunteers, who then tag every bird they capture with a loose-fitting metal or plastic band (like the one above, tight enough to remain on the bird and loose enough to not impede it or cause discomfort).  Very quickly afterwards, they release it.  If  the banded bird is recaptured, they write down the band number and learn from that where the bird was last captured, how long ago it was captured, etc. Much of what we know about bird migration comes from bird banding operations. 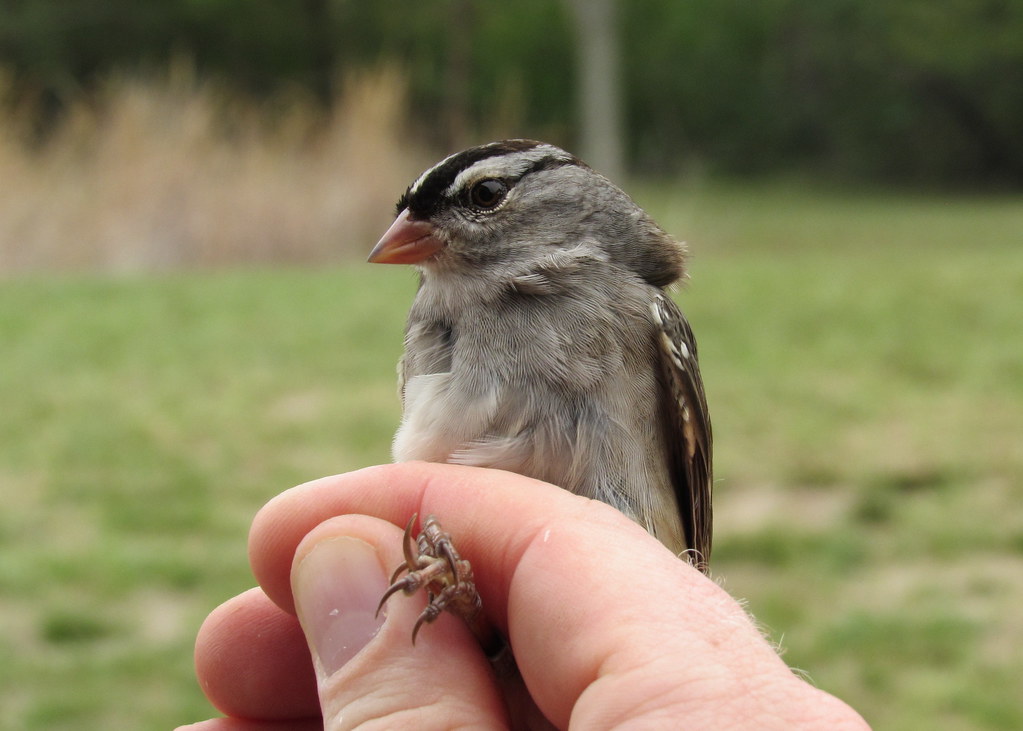 For instance, the first White-crowned Sparrow (Zonotrichia leucophrys) of the fall 2017 season was banded the day I arrived.  The banding station is at Lincoln Land Community College, open roughly 7 to 11 AM Monday- Saturday,  late August- early November and late March- May. 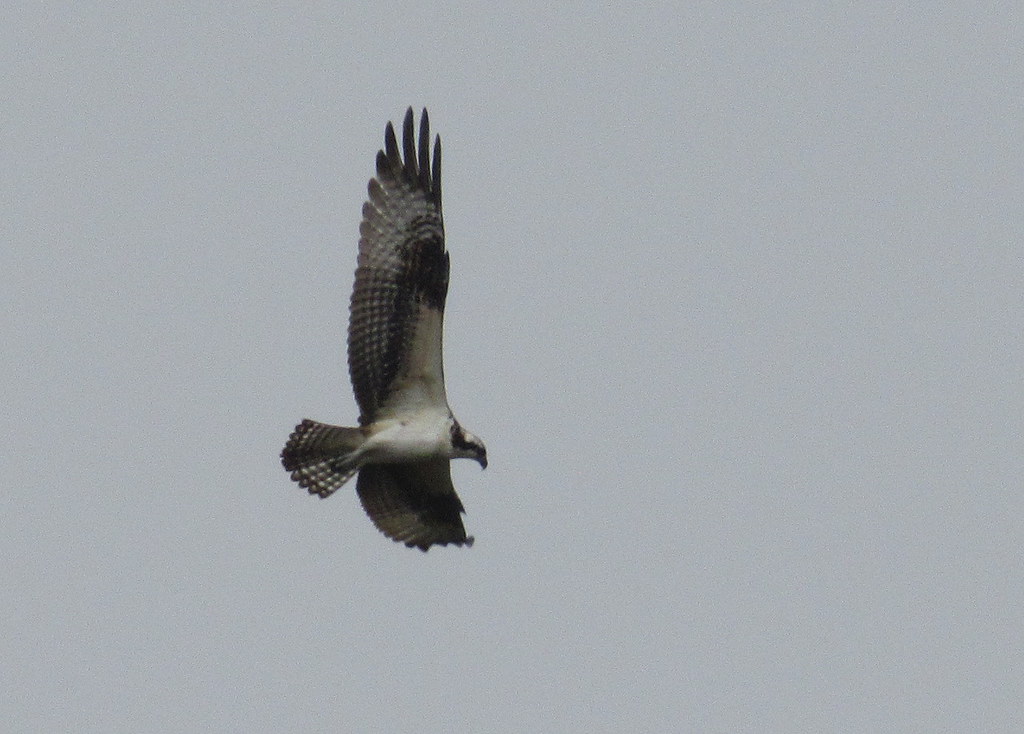 Not all the interesting birds were banded- a migrating Osprey (Pandion haliaetus) flew over and fished at the lake.  That was likely the best bird of the day. 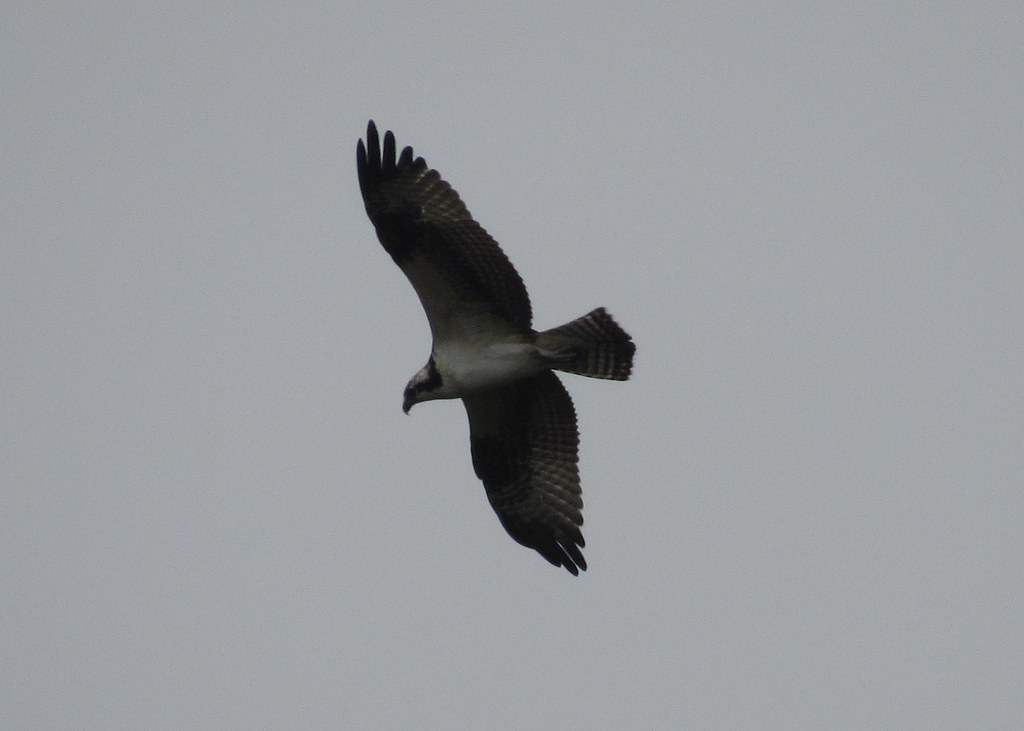 The bird fished for awhile at the pond- I believe it was still in the area when I left, but that was two weeks or more ago.  Ospreys aren’t common birds in Illinois, but they become more common during migration. 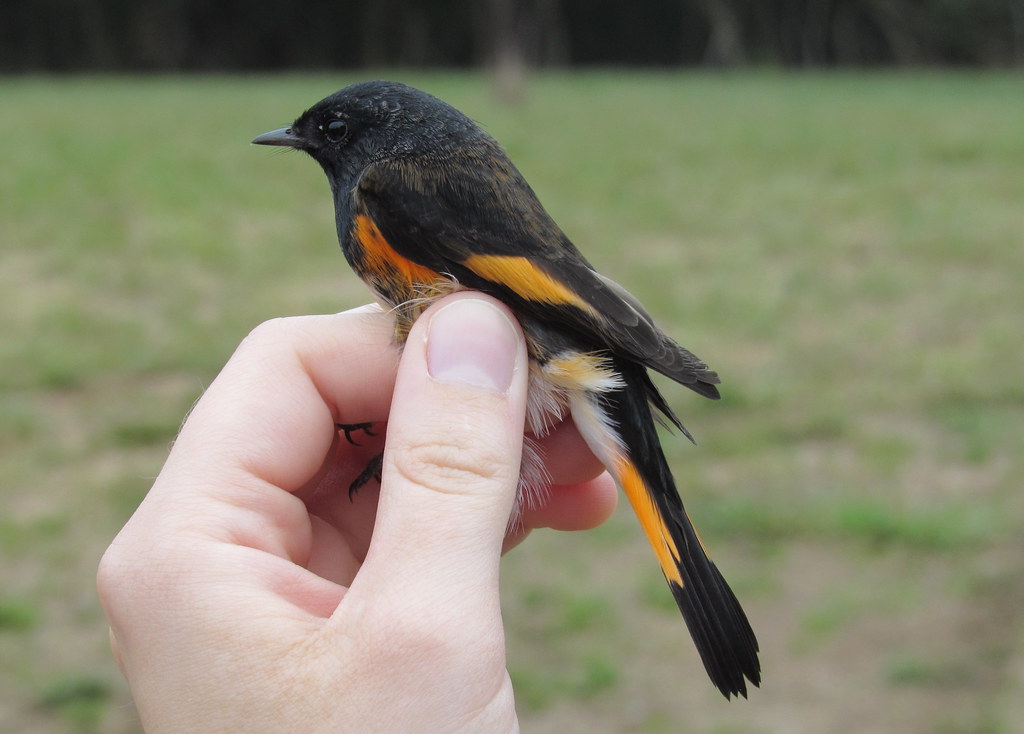 Speaking of migration and data, this American Redstart (Setophaga ruticilla) was running a bit later than usual for migrating out of Illinois.  After it was banded, under careful instruction and the watchful eyes of the banders, I was allowed to hold and release the bird.   Releasing a bird is a very satisfying and enjoyable thing to do, and it’d been awhile since I’d been able to do it. 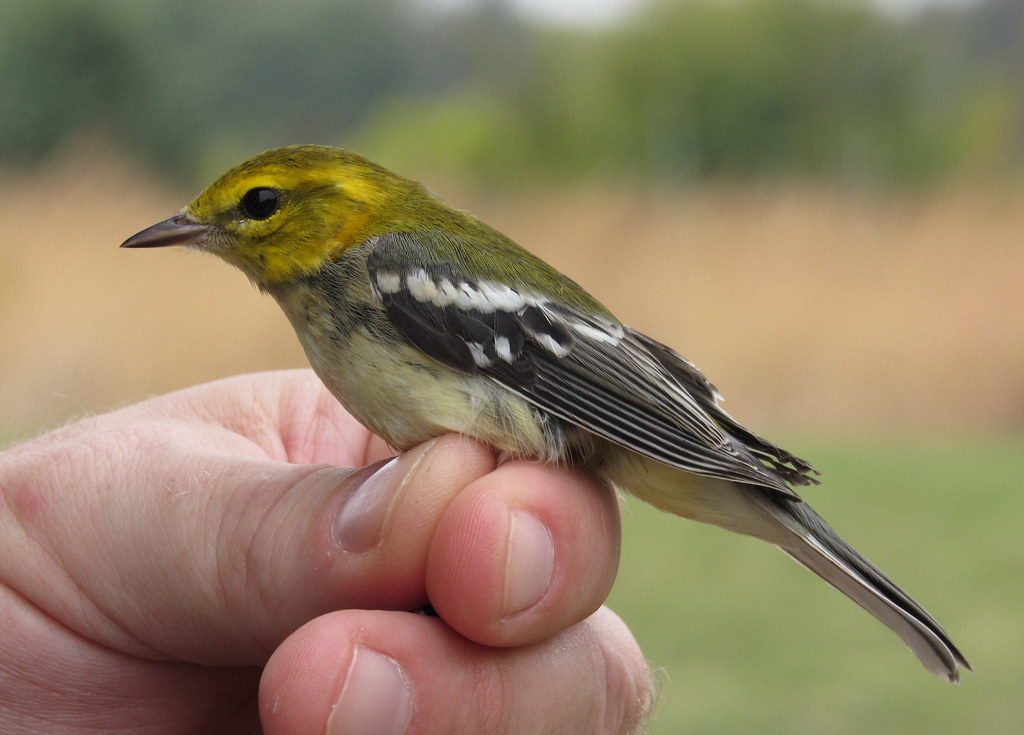 My dad got to release a Black-throated Green Warbler (Setophaga virens) before we left, his first time doing so.  It was one of my favorite moments of the year… I’m glad he had the day off to do so.  I’m back in Southern Illinois now, getting into trouble… more on that in a future post also!