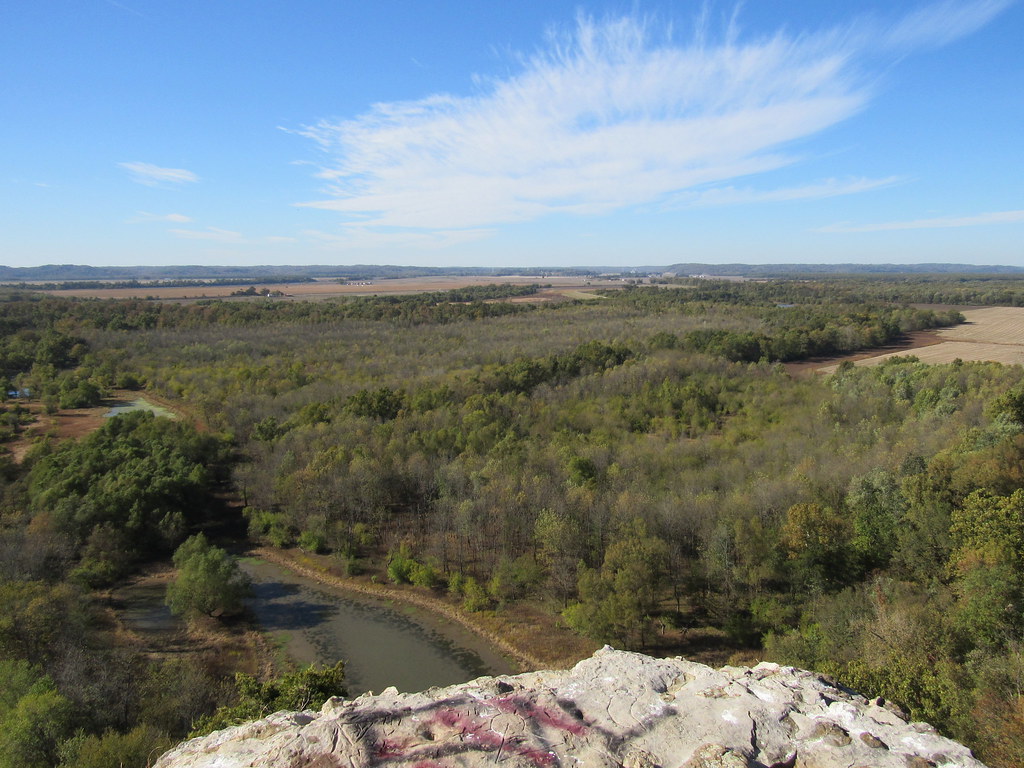 This is basically a summary post of three trips at Snake Road, covering the last few days of October and the first week or so of November. 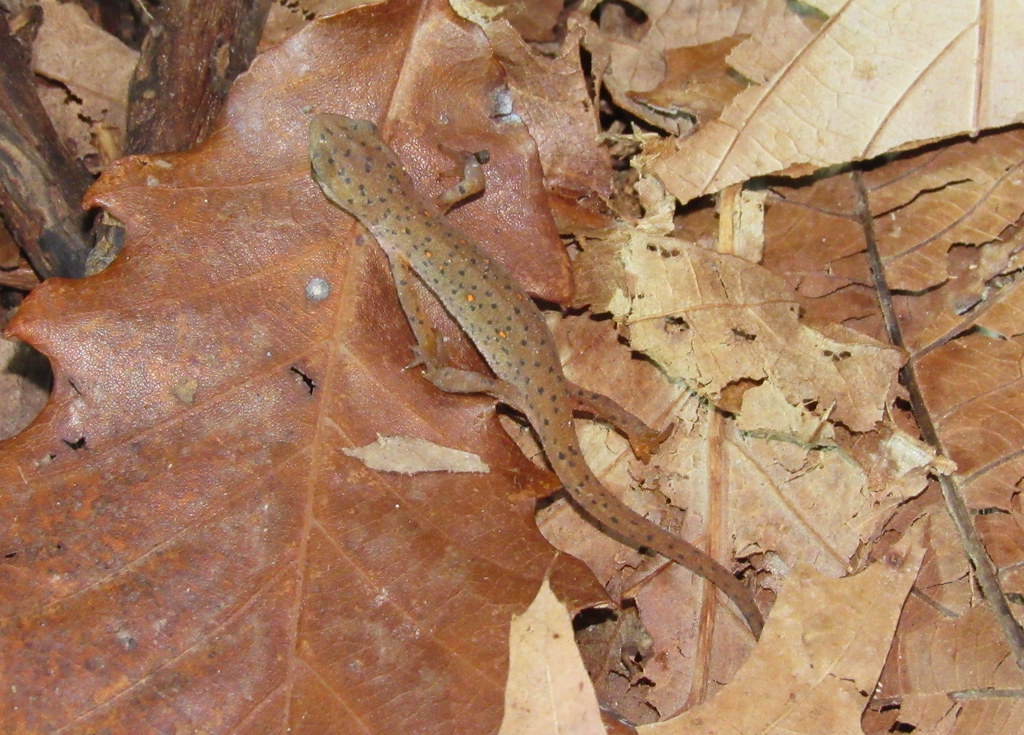 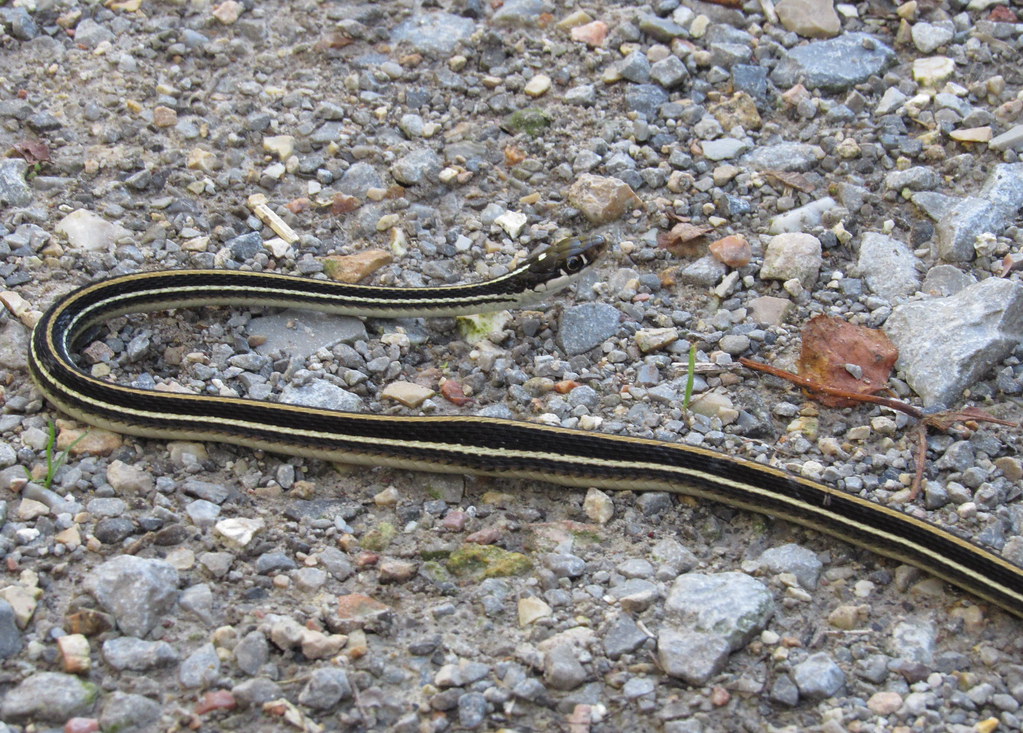 Western Ribbon Snakes (Thamnophis proximus) were understandably happy about this.  Ribbon (and other types of garter) snakes and newts are in a toxic relationship- as the newts increase the amount of toxins on their skins, the snakes increase their immunity to such toxins.  I took a friend along to this area- this was his first Snake Road snake. 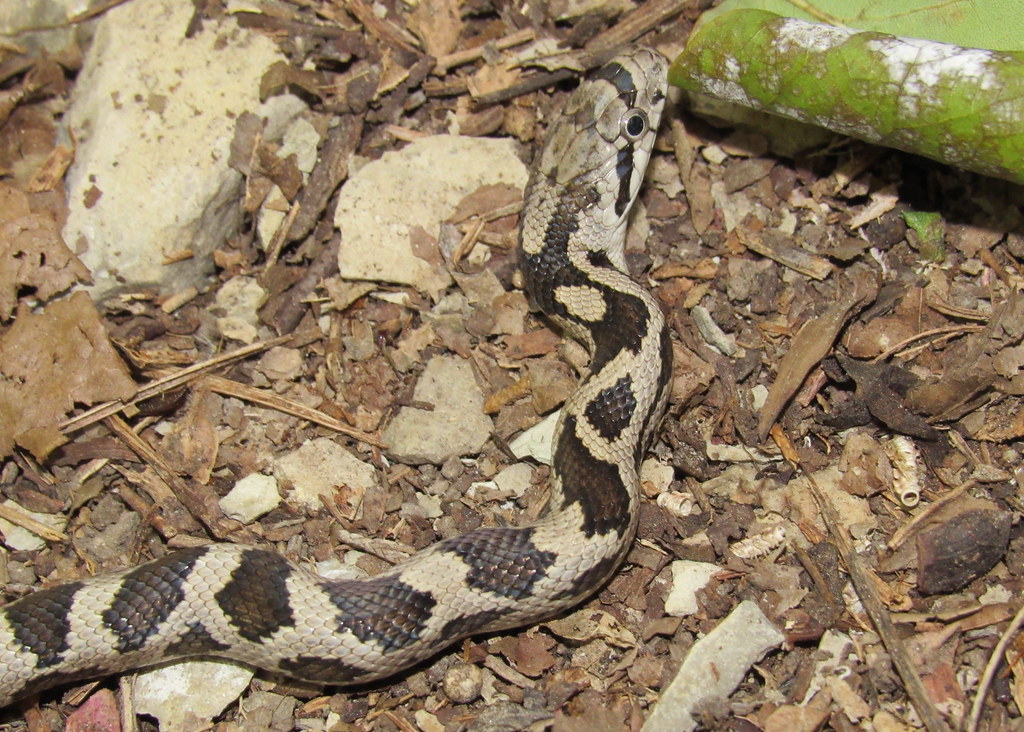 His second was a Black/Gray/Western Rat Snake along the bluffs.  I posted online that this would be the last Rat Snake of the year.  I figured it would be the best snake on that particular day… 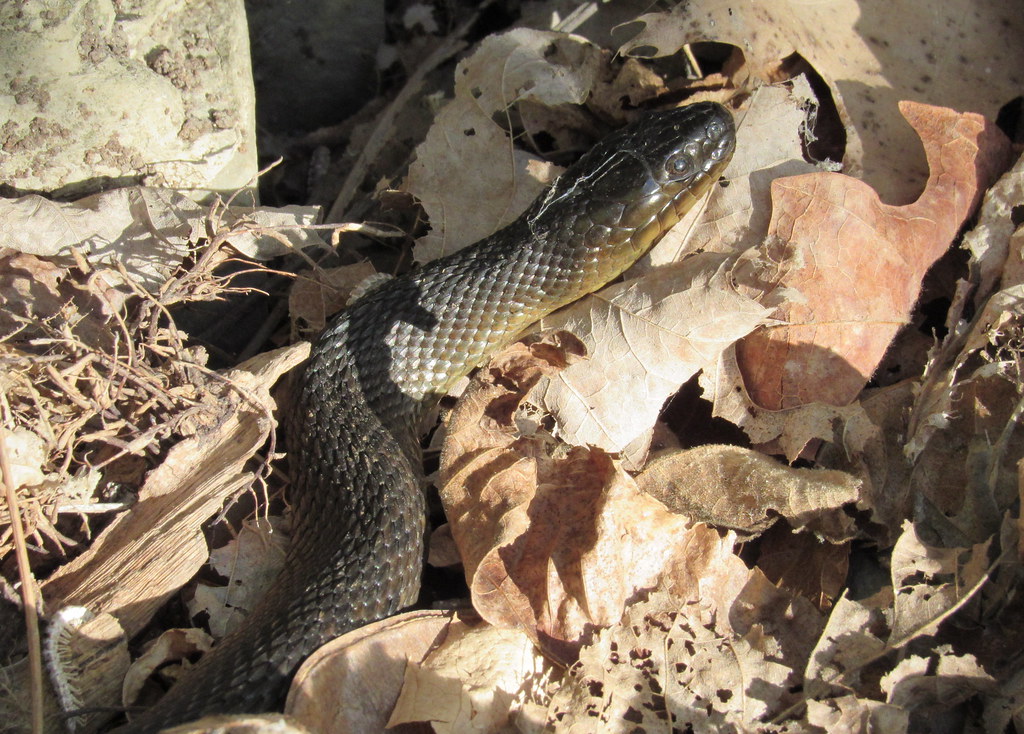 It was upstaged by a Mississippi Green Watersnake (Nerodia cyclopion)- a State-Threatened species in Illinois found only at Snake Road.  Frankly, I think these should be called Olive Watersnakes- their color and head shape both resemble olives to some extent. 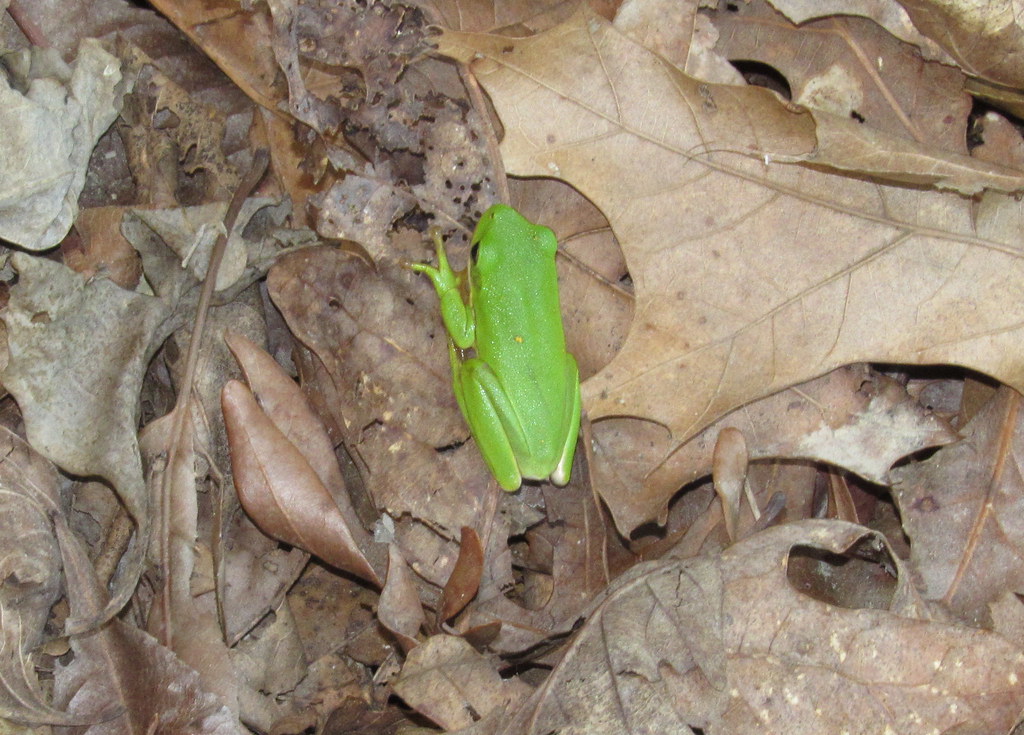 I have no problems with the common name Green Treefrog for Hyla cinerea.  We walked along the bluffs, looking hard for Cottonmouths and finding surprisingly none.  Where were they? 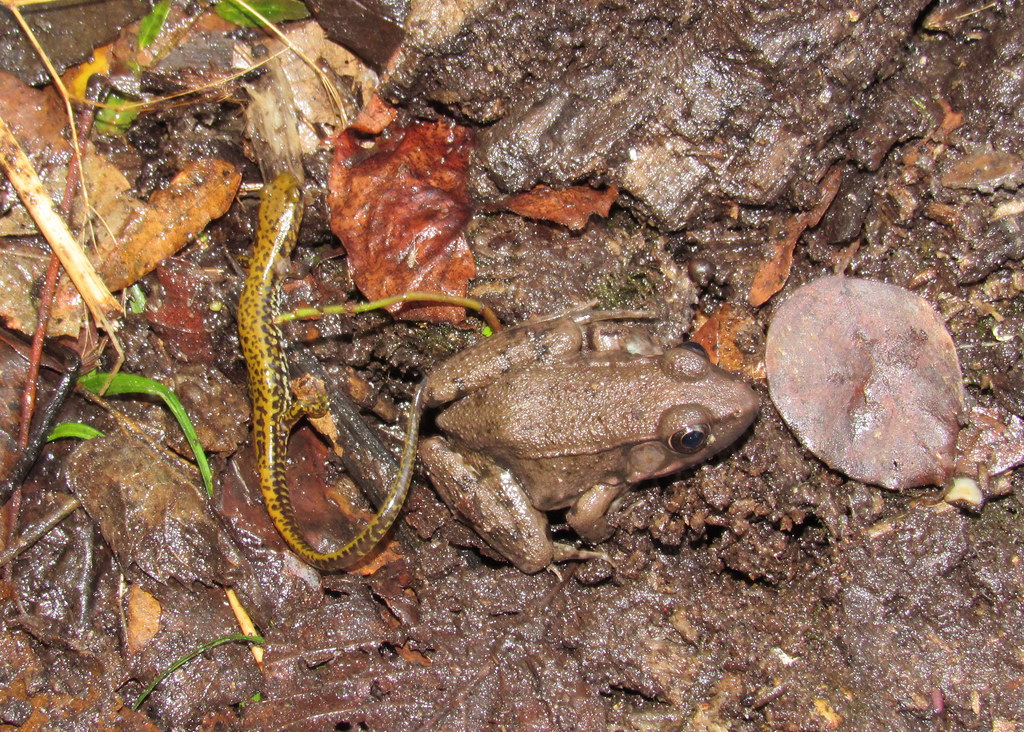 Flipping a log in a creek did get us a Long-tailed Salamander (Eurycea longicauda) and a Green Frog (Rana clamitans).  That this frog hasn’t eaten the salamander is a bit surprising to me. 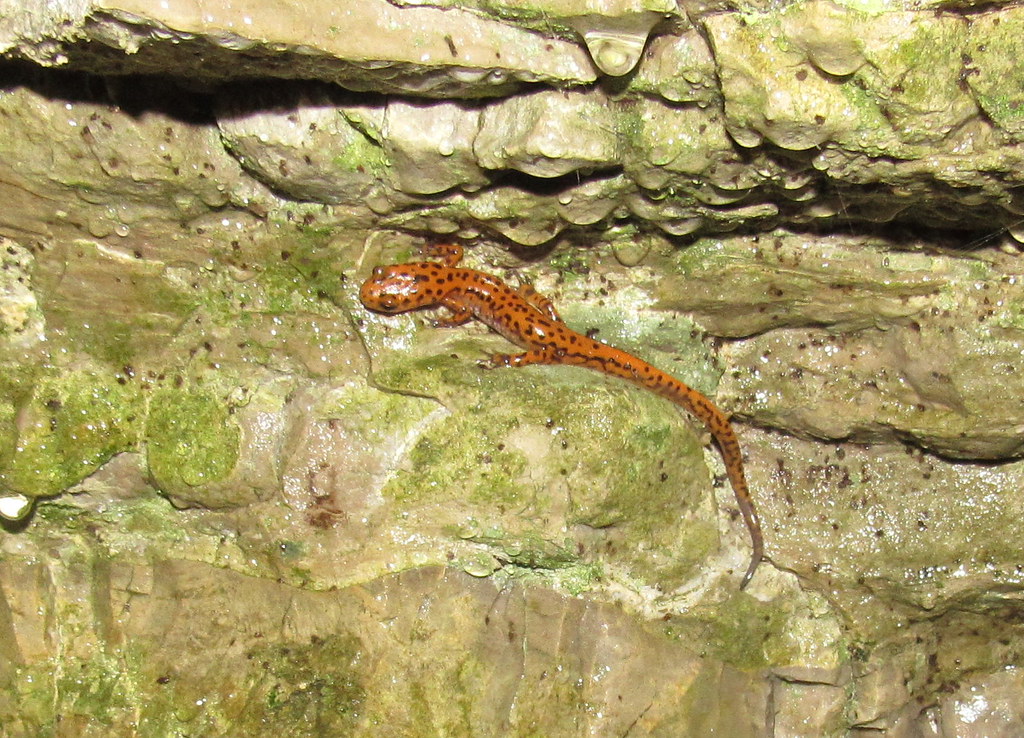 Wandering back to the Cave Salamander (Eurycea lucifuga) spot proved fruitful, as usual, with 15-20 salamanders present.  A crevice in this area yielded our first and only Cottonmouth of the day, and we watched the little Cricket Frogs (Acris crepitans) hop out of our way as we left: 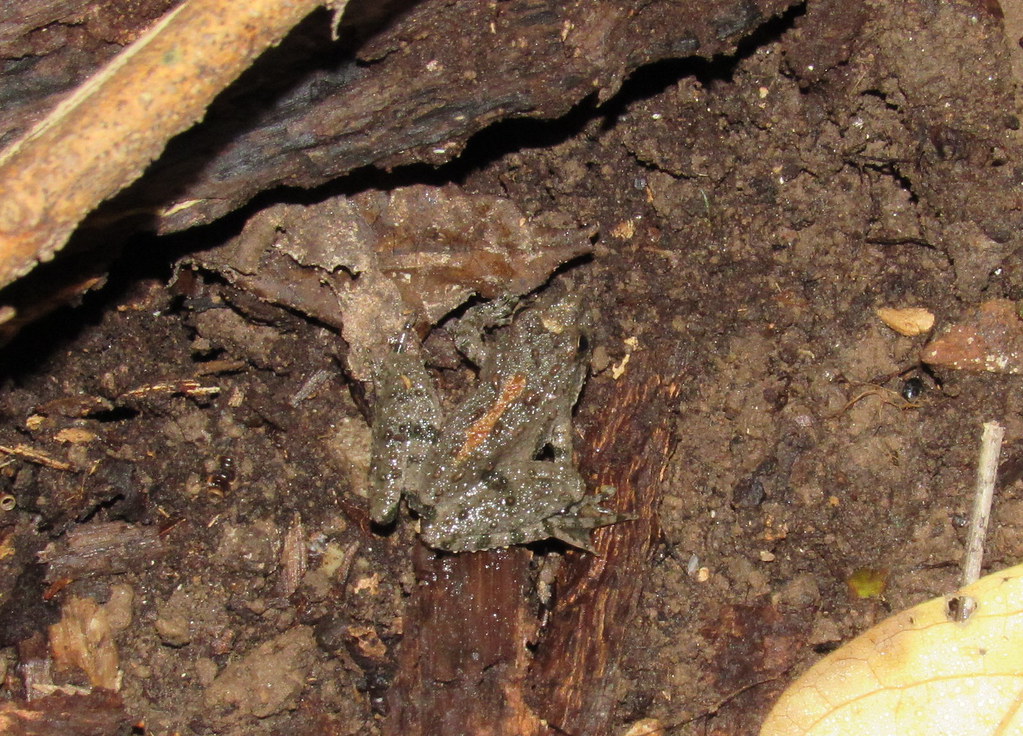 A few days later, I returned with other friends. 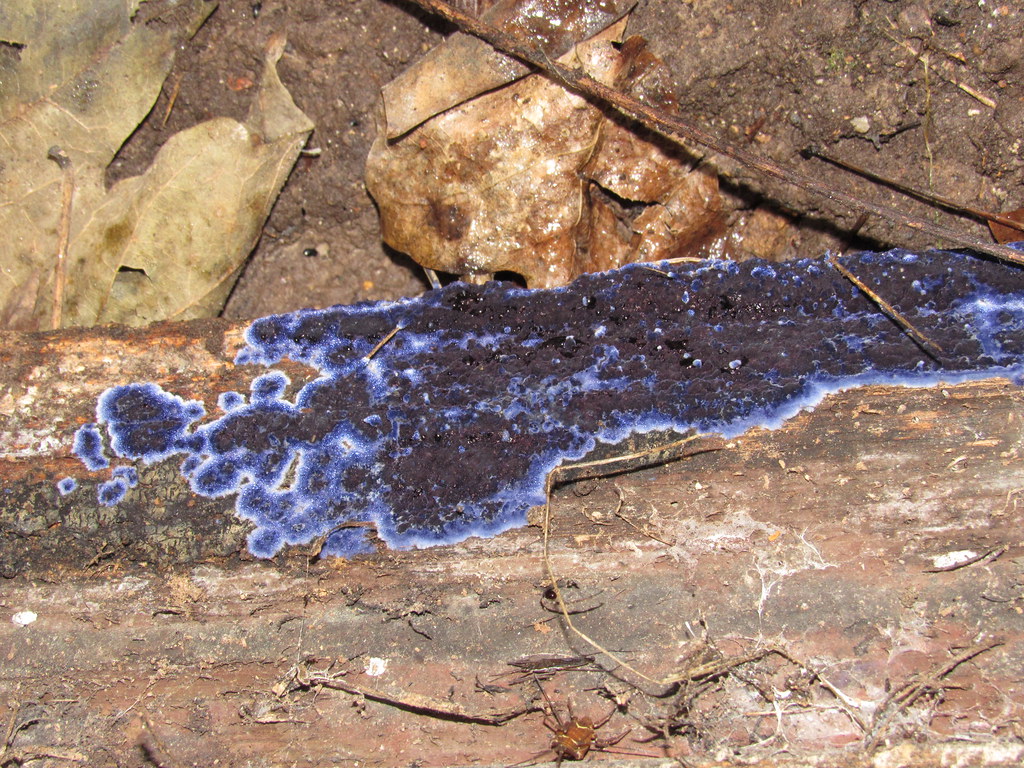 While looking for salamanders, we found this exotic blue fungus and an unusual type of harvestman (Vonones ornata) at the very bottom of the picture (I didn’t notice it until writing this blogpost, actually!)  We also went over to Grand Tower Island: 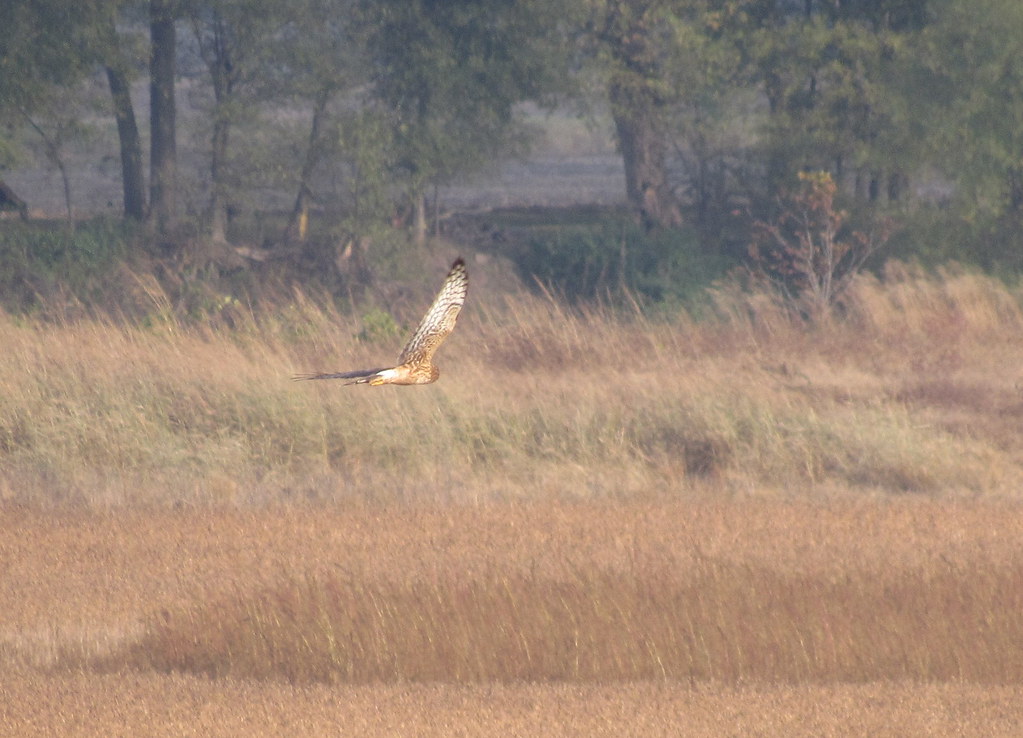 Northern Harriers (Circus hudsonius) have arrived at Grand Tower Island for the winter. 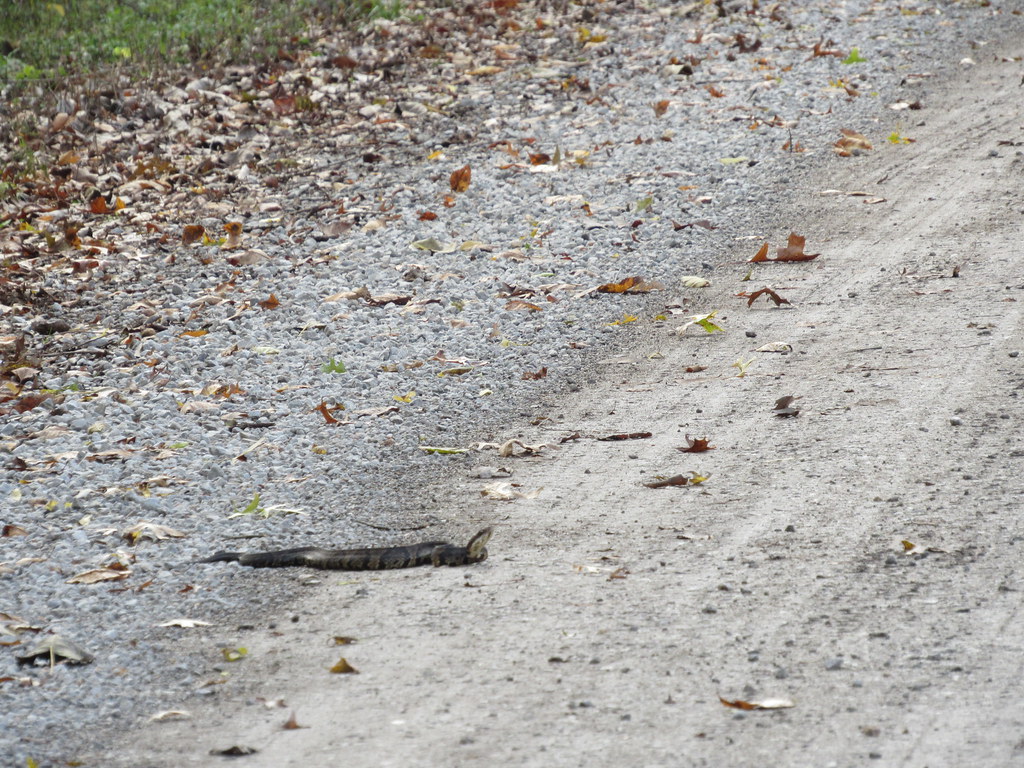 Driving backroads nearby, we found a Cottonmouth (Agkistrodon piscivorus) on November 3, in the middle of the road, miles from a den site.  This encouraged us to get over to Snake Road ASAP. 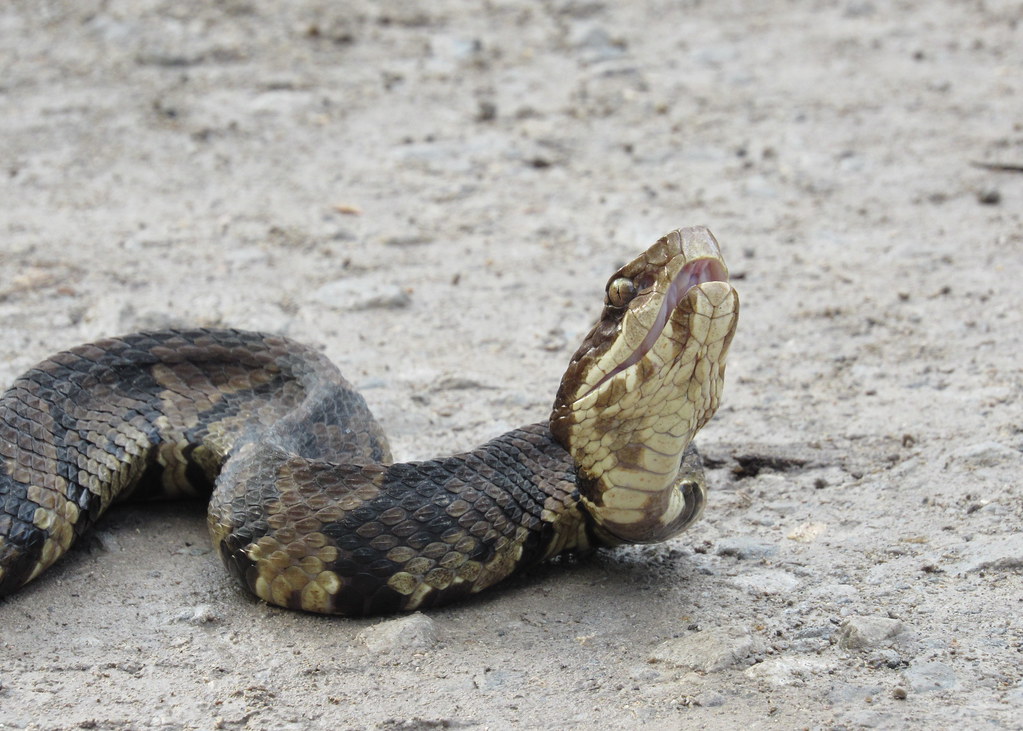 The Cottonmouth was a real nicely-patterned one that posed nicely for us. 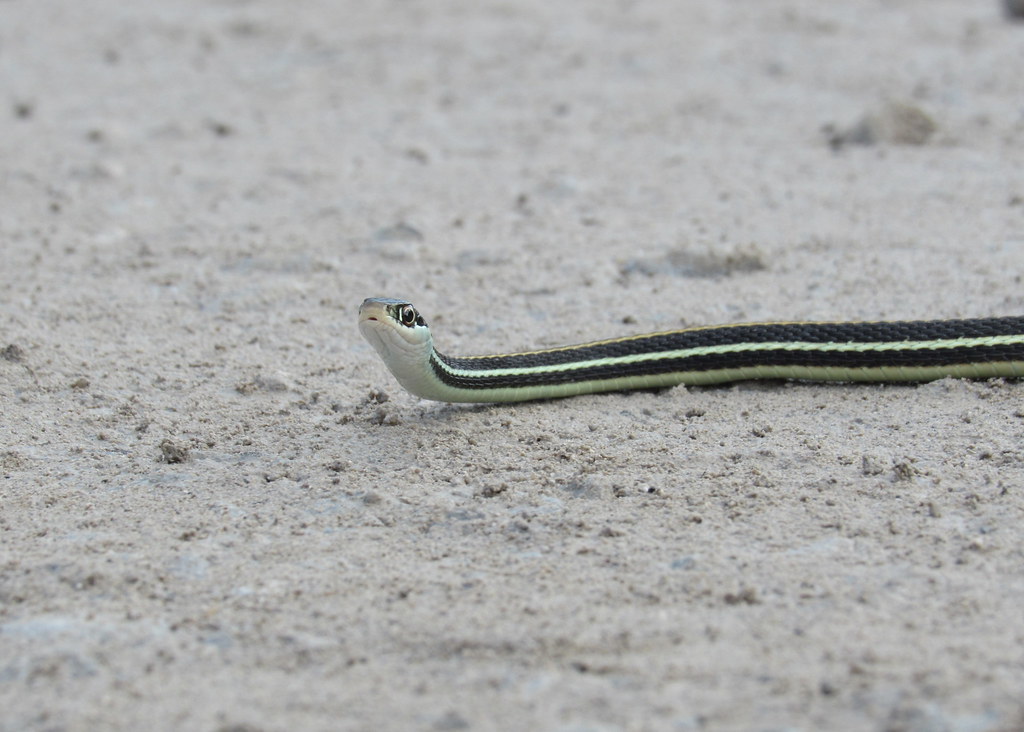 So did a Western Ribbon Snake, just down the road.  I’m not used to just having snakes cross the road all the time in front of me.  Perhaps it’s because I never really looked before, but there do seem to be a LOT more snakes down here.

Once we reached Snake Road, we found nine Cottonmouths.  At one point, we were going down a steep slope on the bluffs, with some brush on one side and leaf piles and the bluff on the other.  I told my friend we need to move very slowly to ensure that we don’t step on a Cottonmouth.  That’s when I saw one in the bushes three feet away from my leg.  My friend and I backed up rather quickly and let it slide by into a hole.  We considered whether or not it would be worth it to go down, and that’s when I looked into the brush to see this: 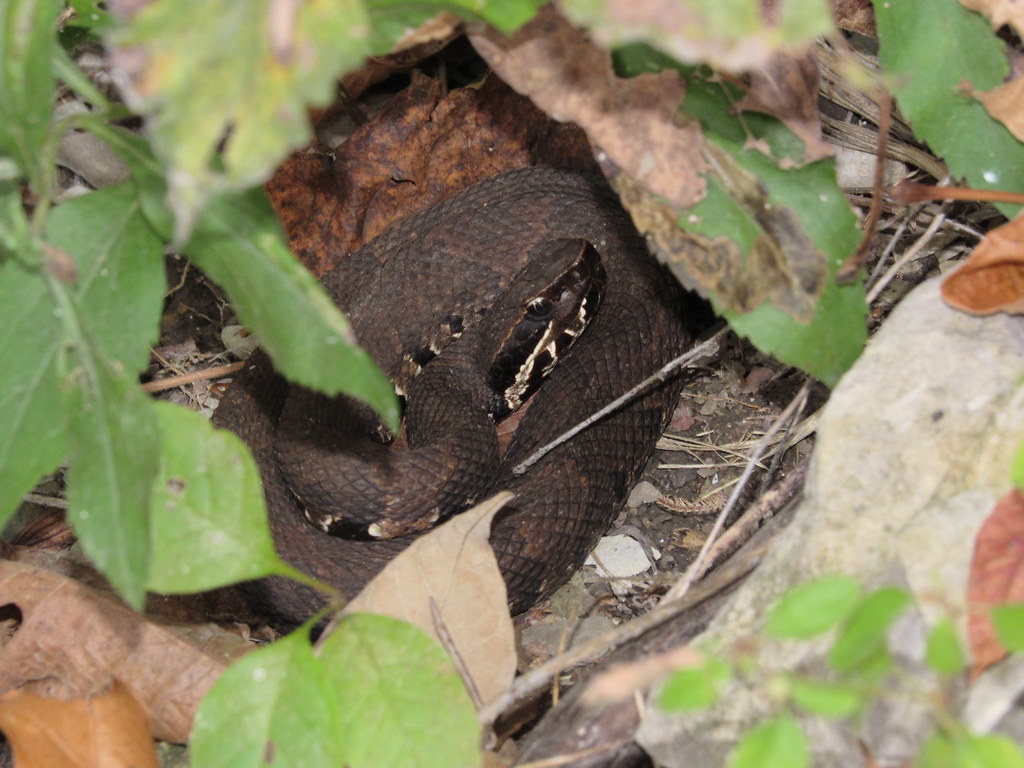 Needless to say, we didn’t go down that way! 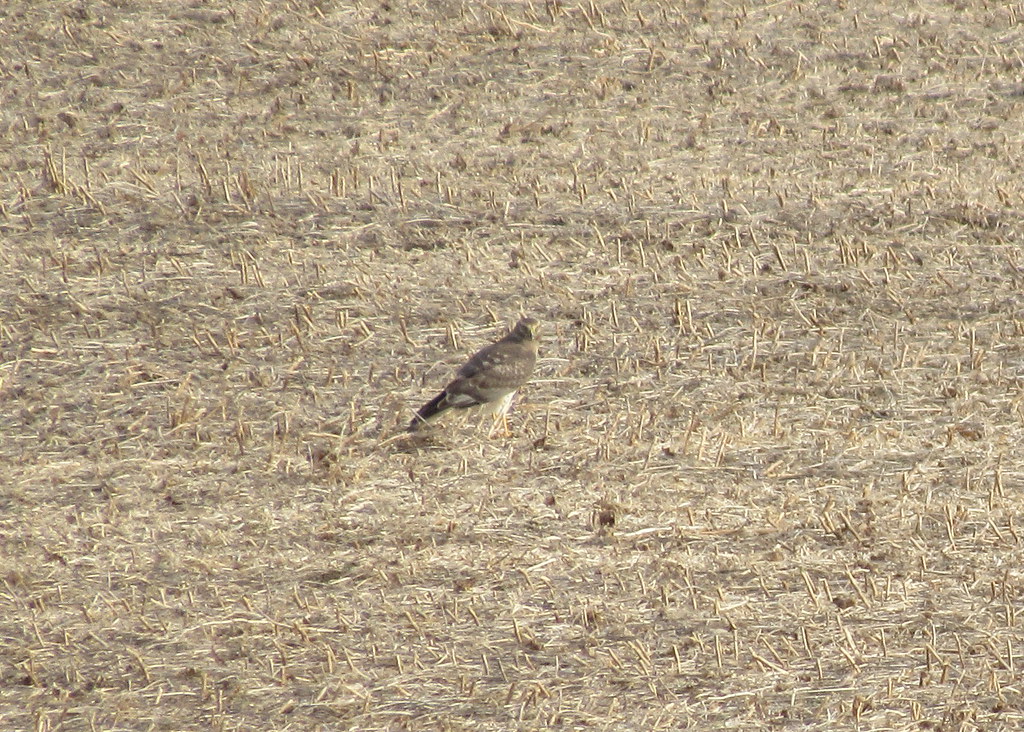 Northern Harriers perched in nearby crop fields.  I presumed they were hunting mice.  However, apparently there were other animals to hunt, also: 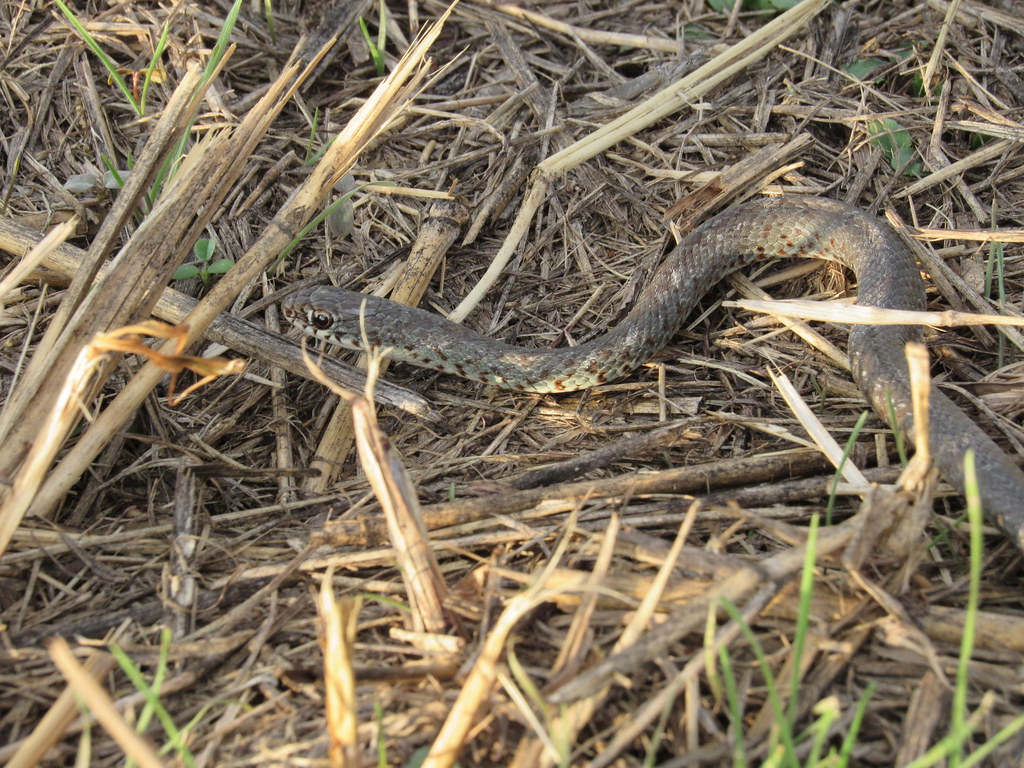 A Southern Black Racer (Coluber constrictor priapus) juvenile, my first one of the year (and probably my last new snake species for the year, haha!) crossed the road and hid in the grass as I drove up.  The amount of dust on the snake’s body indicates that it had been on the road for some time. Racers are one of the fastest and most aggressive snakes in Illinois.  They’re also completely harmless unless you’re a hemophiliac or have some other weird blood disorder where receiving any tiny cut would kill you. 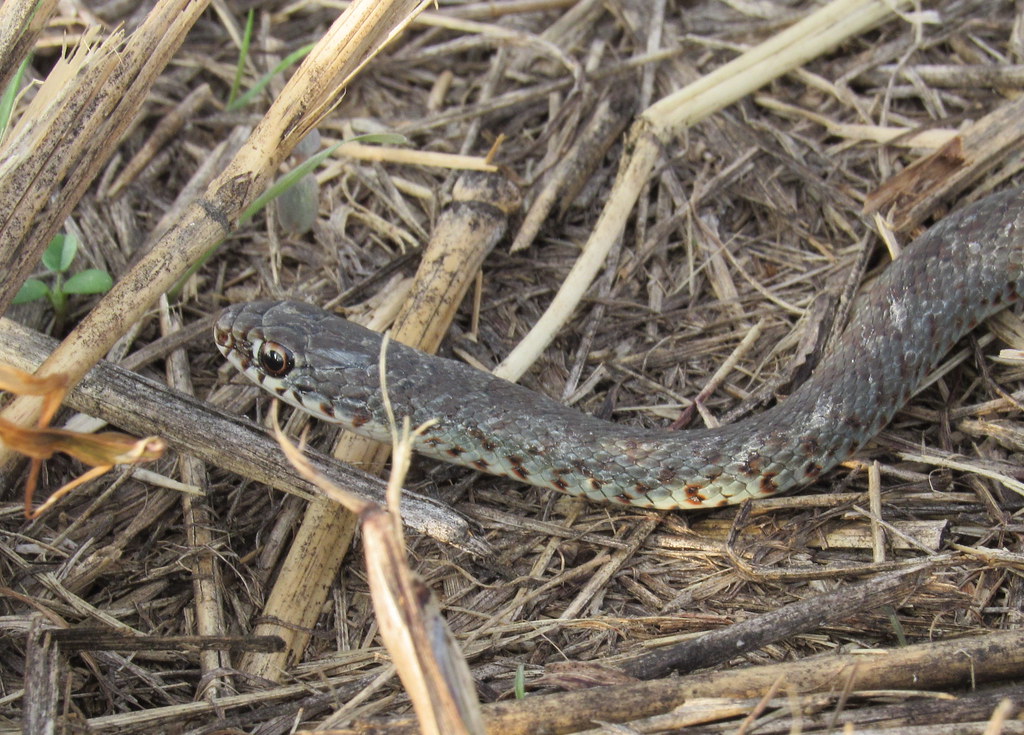 To be fair, aggressive isn’t the right word-  defensive is. Like all snakes, Racers only bite if handled, stepped-on, or cornered, and the last two are extremely hard to do with a Racer, because they can slither away at speeds faster than most humans usually run.  I said this was a juvenile- an adult will be considerably longer and black with a white belly. 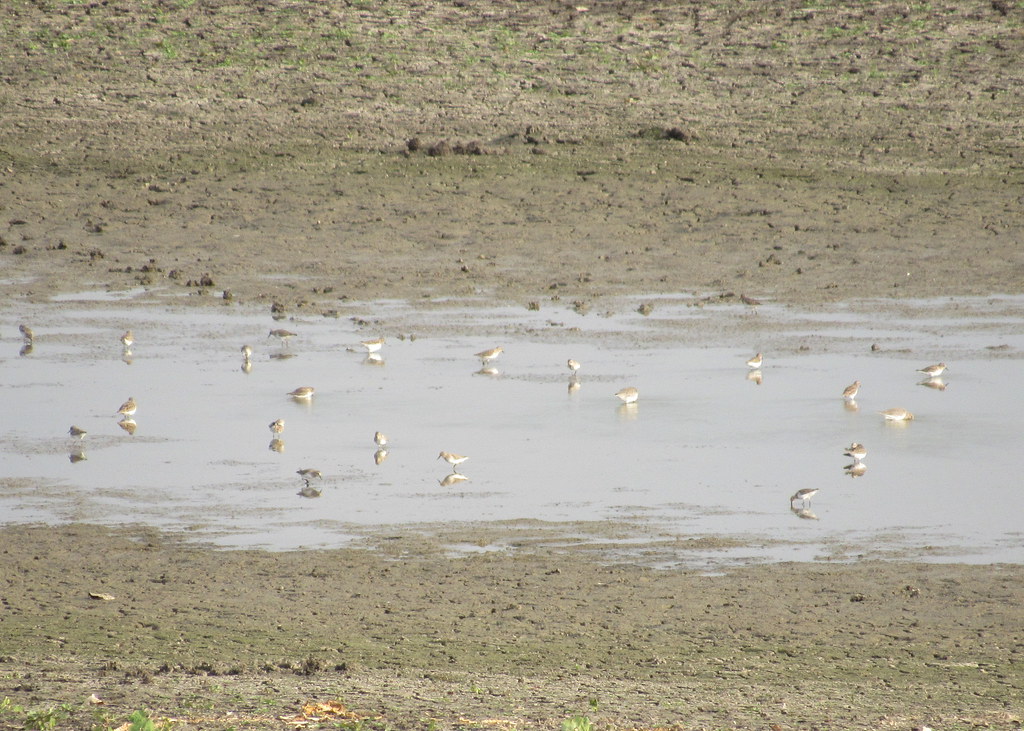 Nearby, on Grand Tower Island, the last of the shorebirds were feeding in the mud.  Baird’s Sandpipers (Calidris bairdii), Dunlin (Calidris alpina), Killdeer (Charadrius vociferous), and Least Sandpipers(Calidris minutilla) scurried about, eating the last few insect larvae as they fueled up for a flight to the Gulf Coast, where most of them will spend the winter.  The last few Baird’s had the farthest to fly- they have to get to South America! 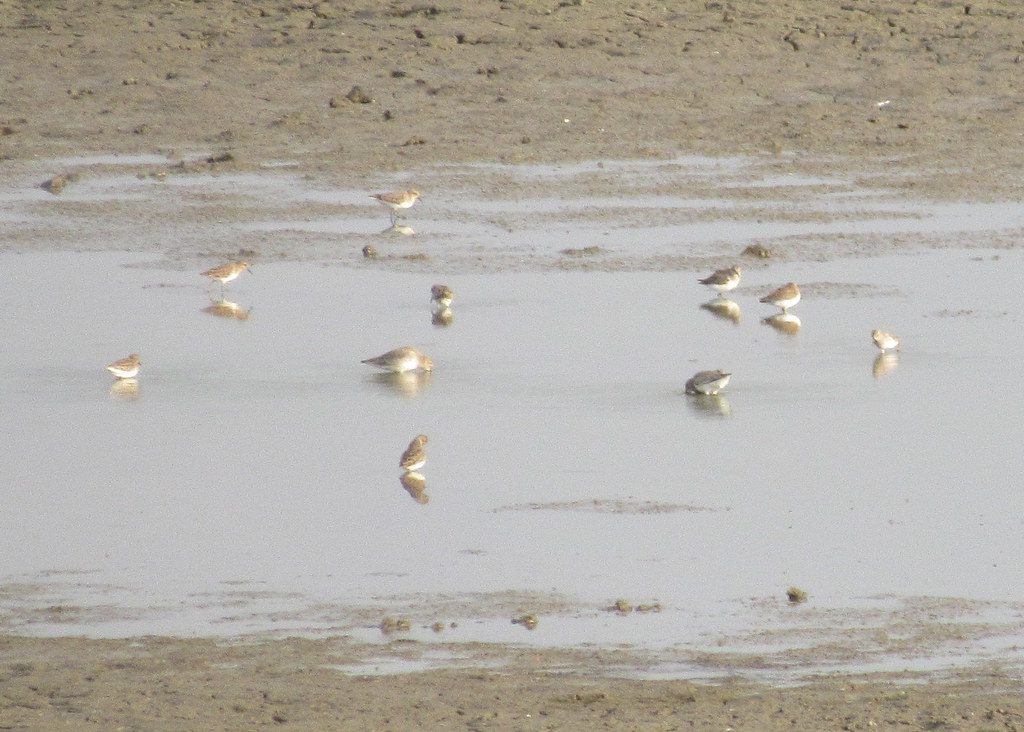 I say it a lot, but the distance which these tiny, robin-sized birds fly twice every year amazes me. 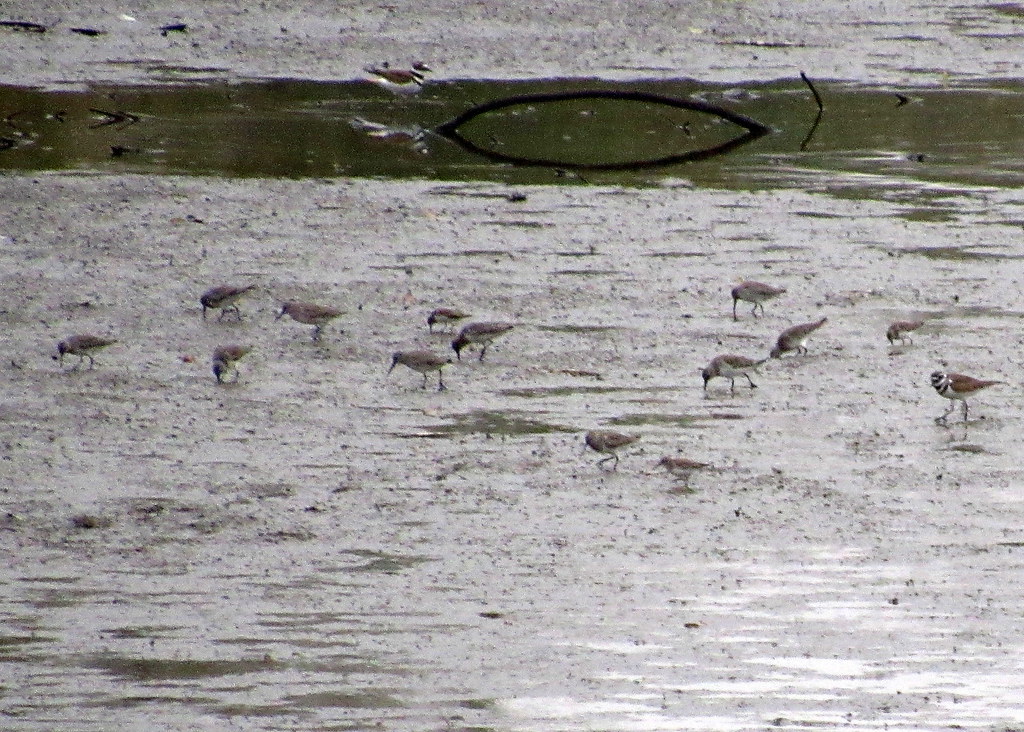 One last trek out here, with a few friends from my apartment, brought us tons of frogs and salamanders moving on a light, misty Sunday.   Spring Peepers (Pseudacris crucifer) hopped about on the forest floor, the X on their backs making them instantly identifiable. 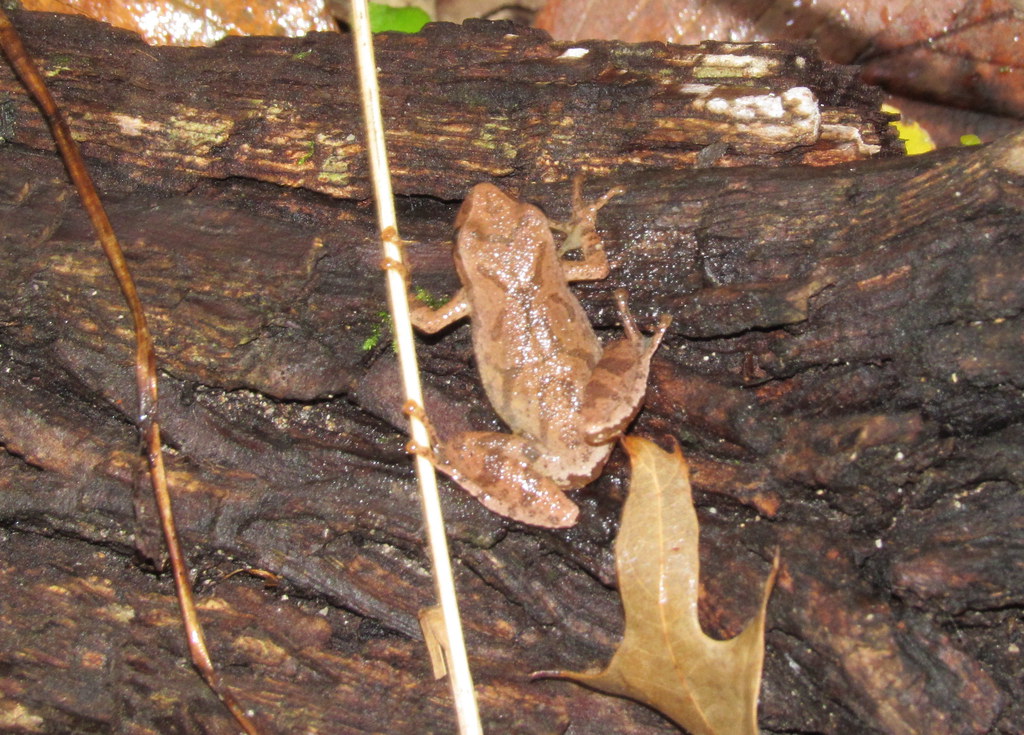 In crevices, Long-tailed Salamanders lurked about.  I always wonder how many salamanders there are- I’d guess we only see a tenth of the ones present in the cracks at the most. 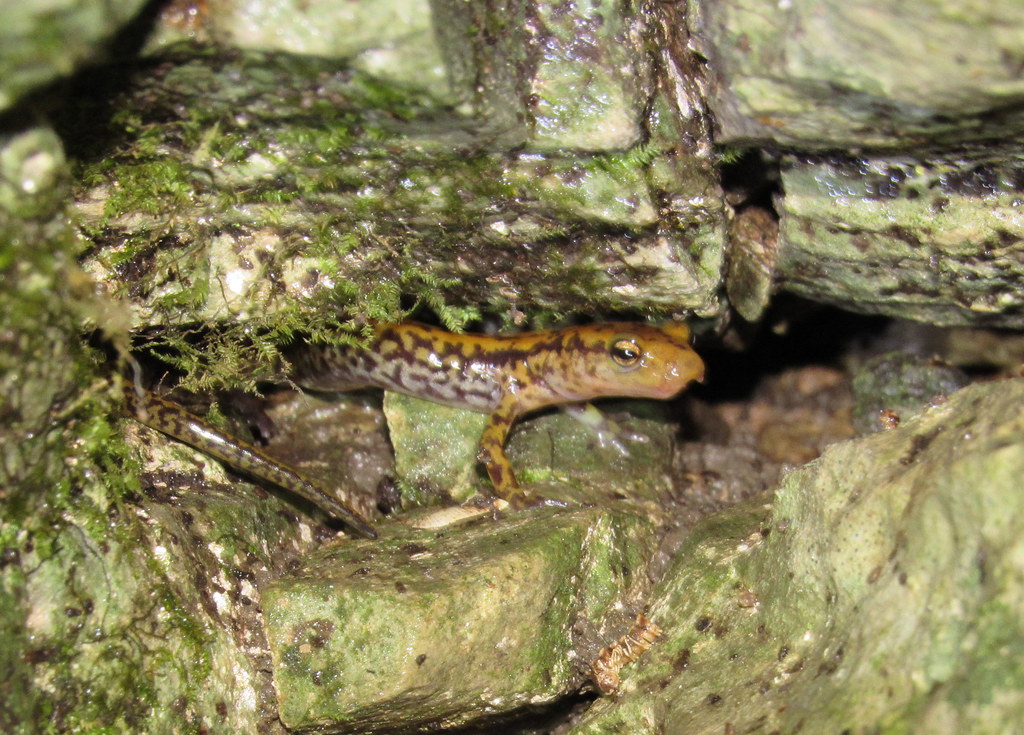 We had to watch our step on that day, though- Central Newt efts were everywhere, in the dozens: 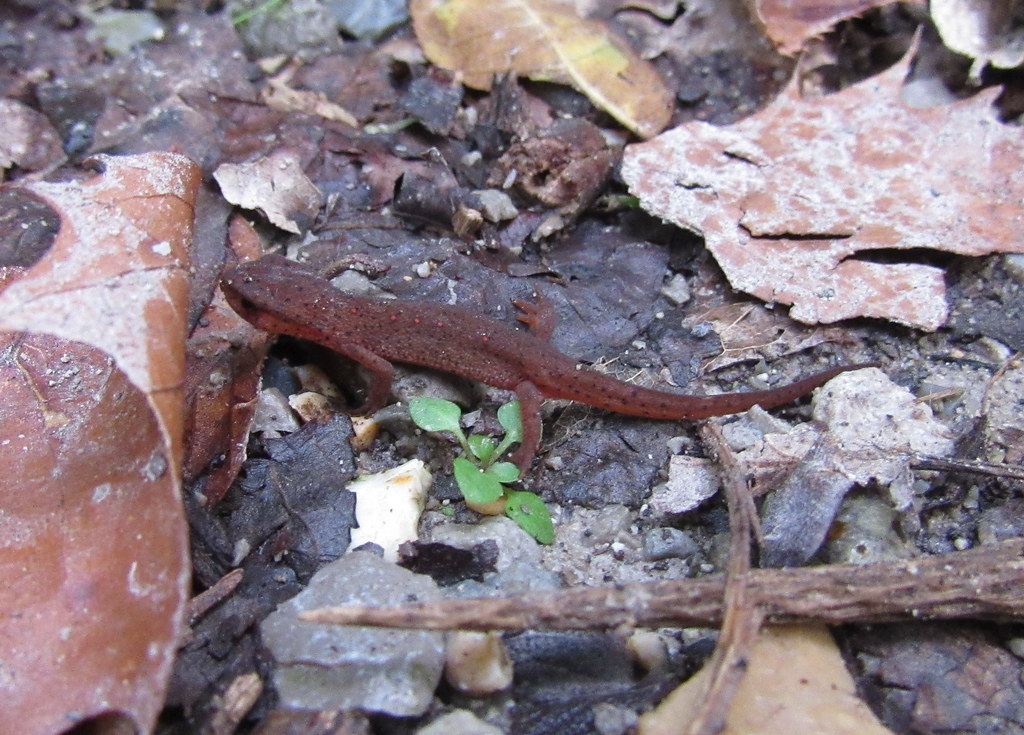 I’d never seen so many salamanders at one spot.  I suspect the rain had gotten them moving. 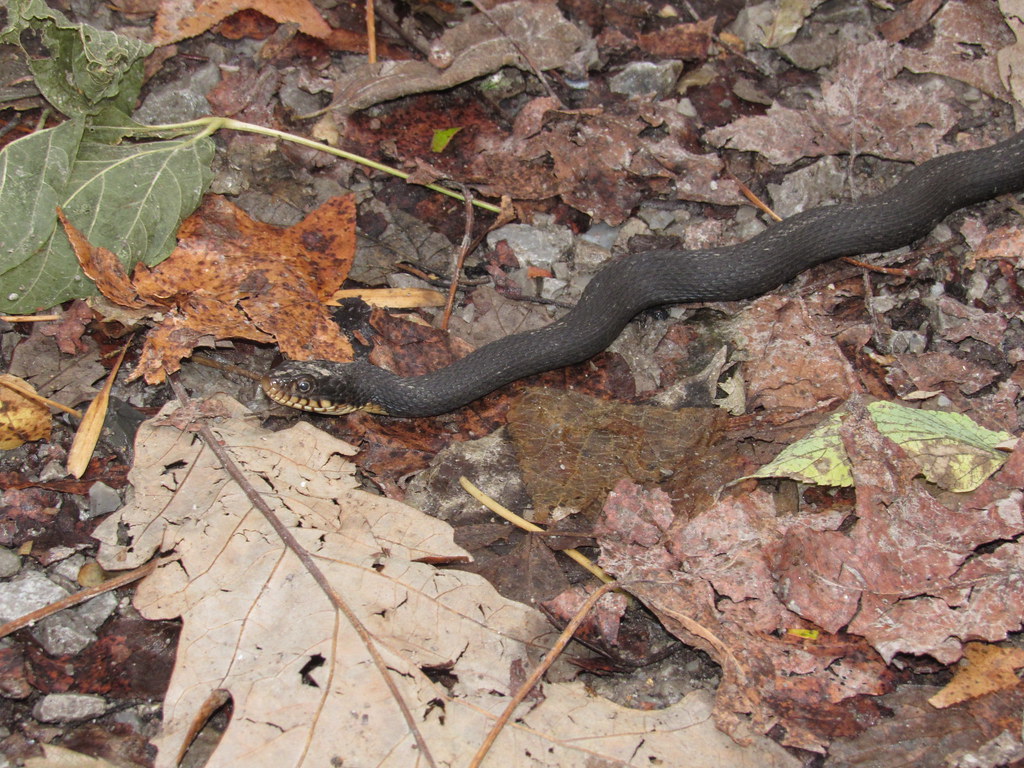 The last snake on Snake Road I saw was this Plain-bellied Watersnake (Nerodia erythrogaster). 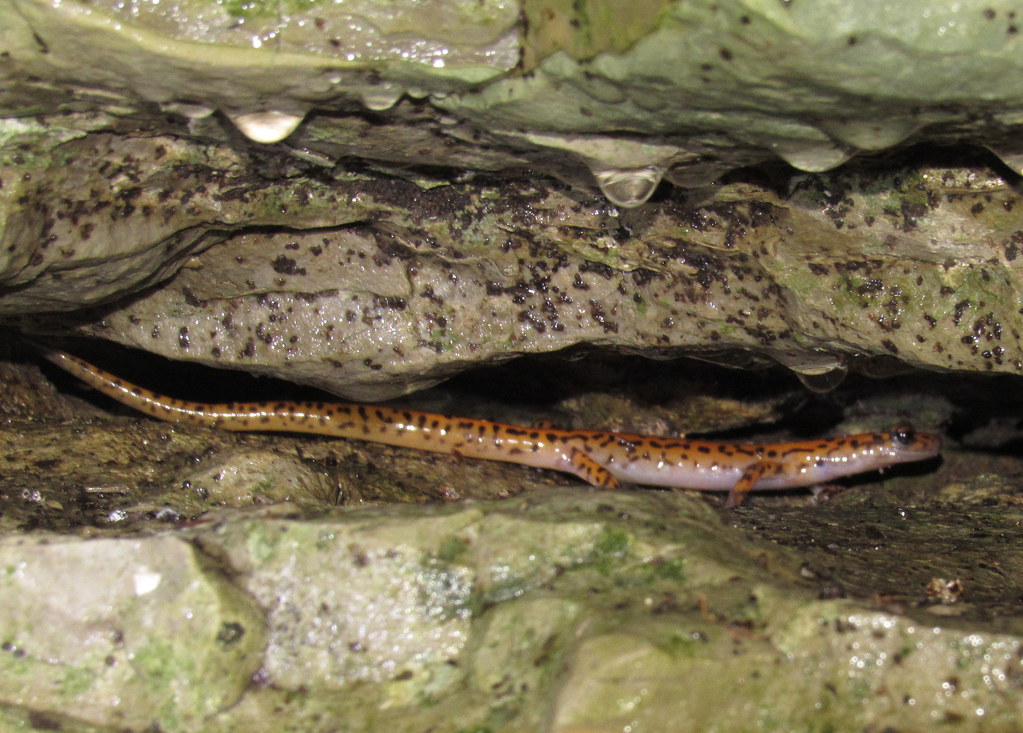 I did mention there were lots of salamanders, right?  Here’s the full length of a Cave Salamander, tail and all.  They almost deserve the “Long-tailed” name! 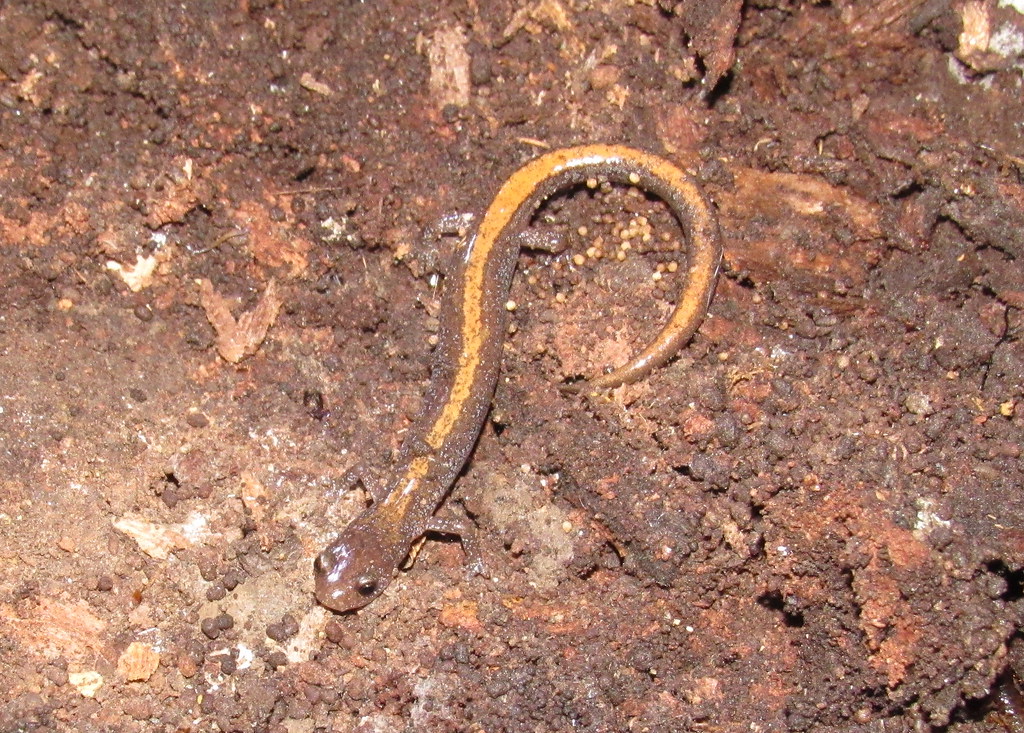 My possible last lifer salamander of the year was this Northern Zigzag Salamander (Plethodon dorsalis)- these are fairly common in parts of Southern Illinois, I just don’t see them often.  They replace the Eastern Red-backed Salamander in the Shawnee Hills, though in far eastern Illinois the Red-backed is the dominant species. “Zigzags” vary in their zagginess by range, with this form being one of the least zaggy. 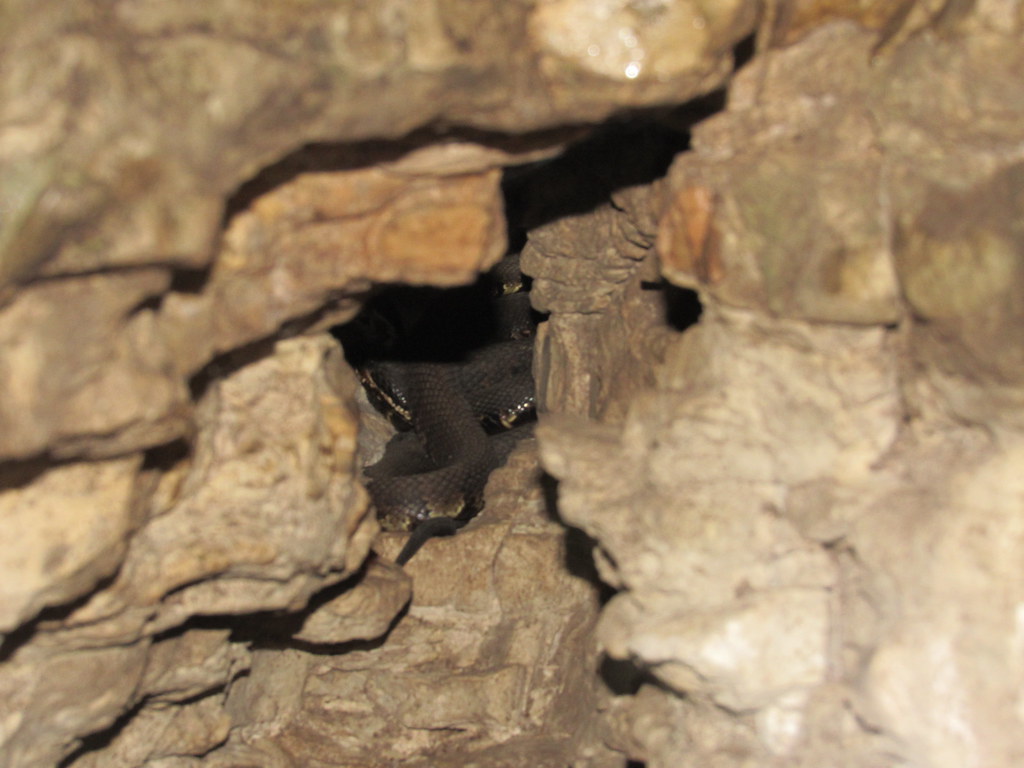 In crevices nearby were the last few snakes of the year, three Cottonmouths (pictured) and… a rat snake.  Well, even though none of the photos turned out, it was the last snake of the year (I expect).  We’ll see if that pans out- I’ve said it before, and I may end up saying it incorrectly again. 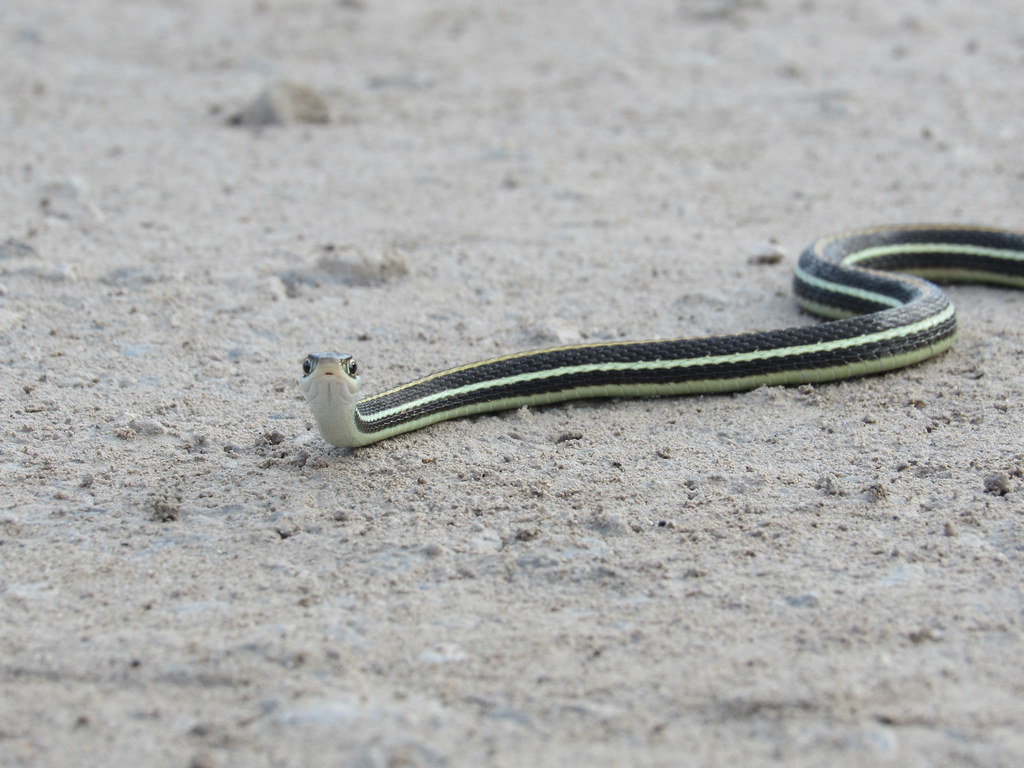 I saved these last two photos for the end- I’m so happy with how they turned out.  There’s not much cuter in the herp world than this Western Ribbon Snake, and there’s not much better in the scenic overlook department in Illinois than Inspiration Point, especially with good clouds.  It’s a joy to live in such a beautiful place, with so many creatures.  This is probably the last herping post of the year, and while the herping year started out slow for me, it’s really gotten great.  Hoping for even more next year- I’ve still got plenty of herps (and everything) I haven’t found yet! 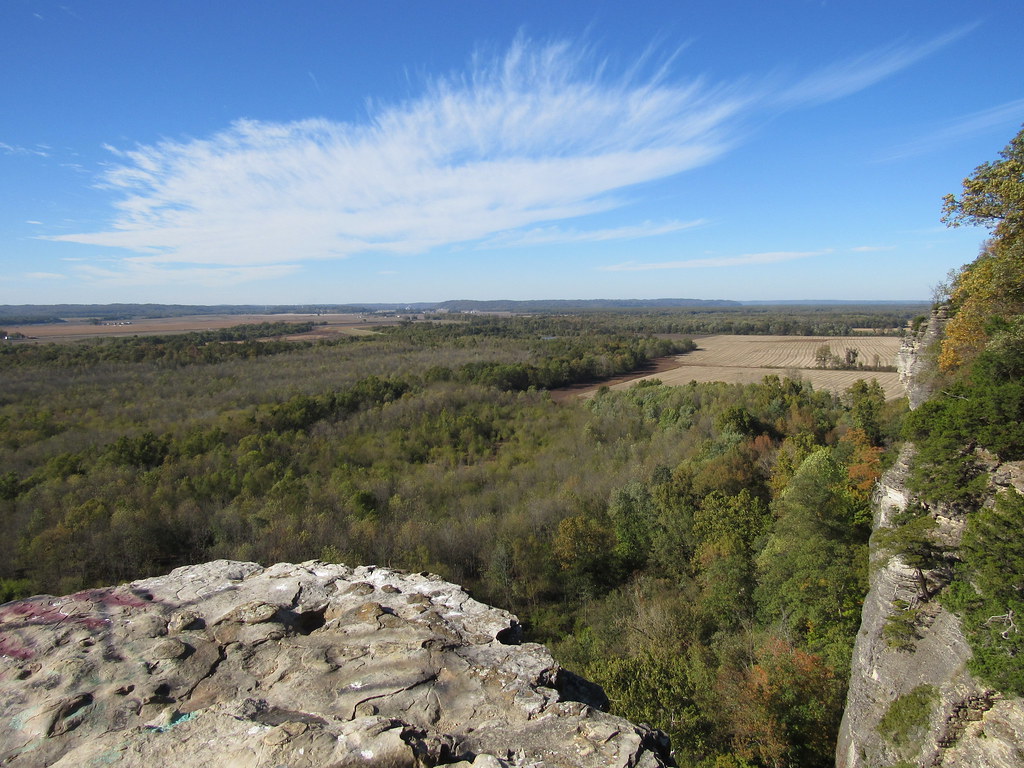