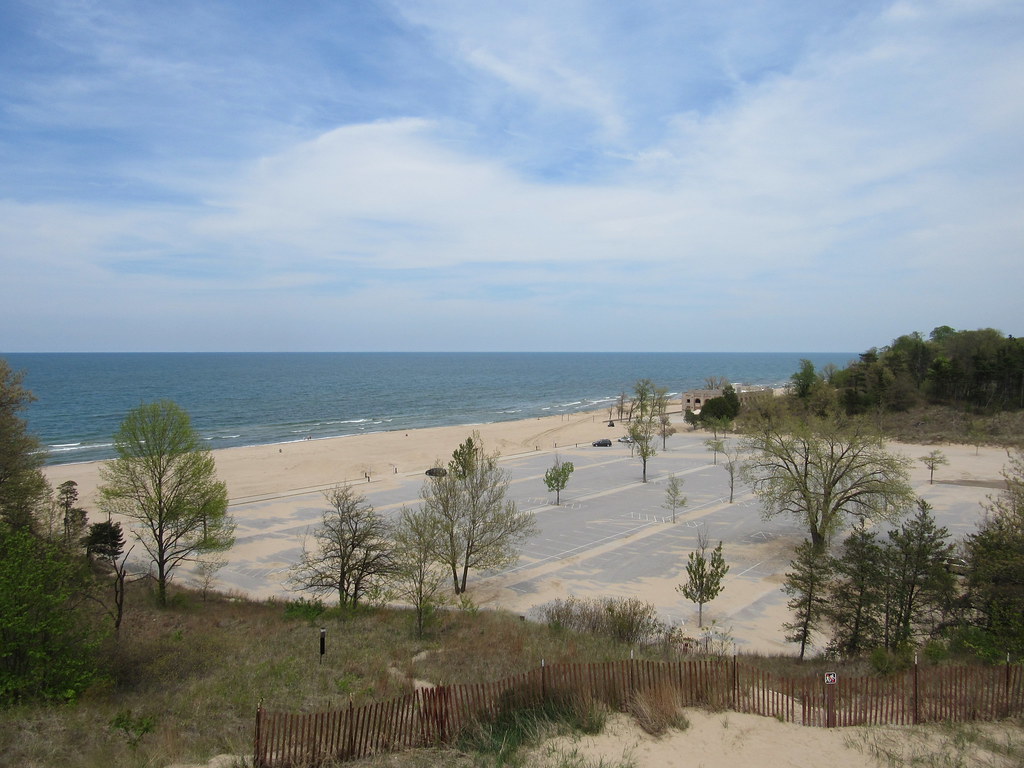 Indiana Dunes  State Park was the last day of my Chicago trip. After hearing a Prairie Warbler from this parking lot,  I met up with Kyle around 10:30 AM  (no early rising!) and we immediately stumbled across an Eastern Hognose (Heterodon platirhinos): 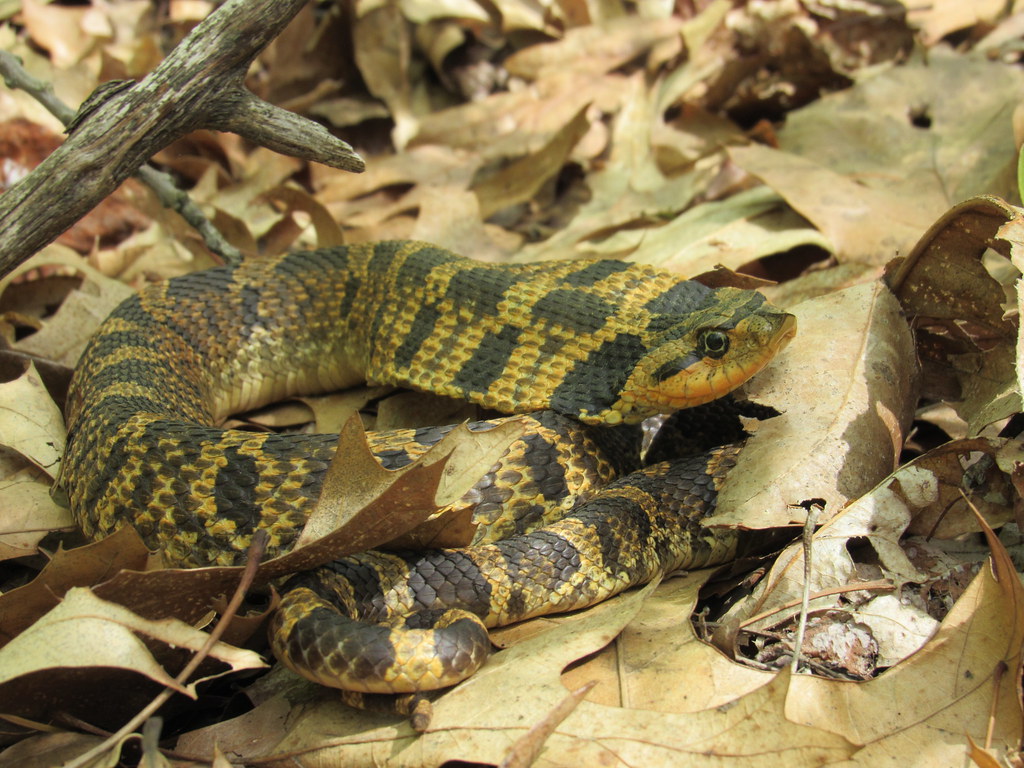 This is easily the best snake I’ve seen this year.  I love Hognoses and their goofy-grinning faces.  The “Hognose” refers to the upturned scale on the top of their upper jaw that they use to dig though sand in search of toads.  Pretty much all a Hognose eats is toads.  Feeling threatened, the snake flattened out and pretended to be a cobra for a bit. 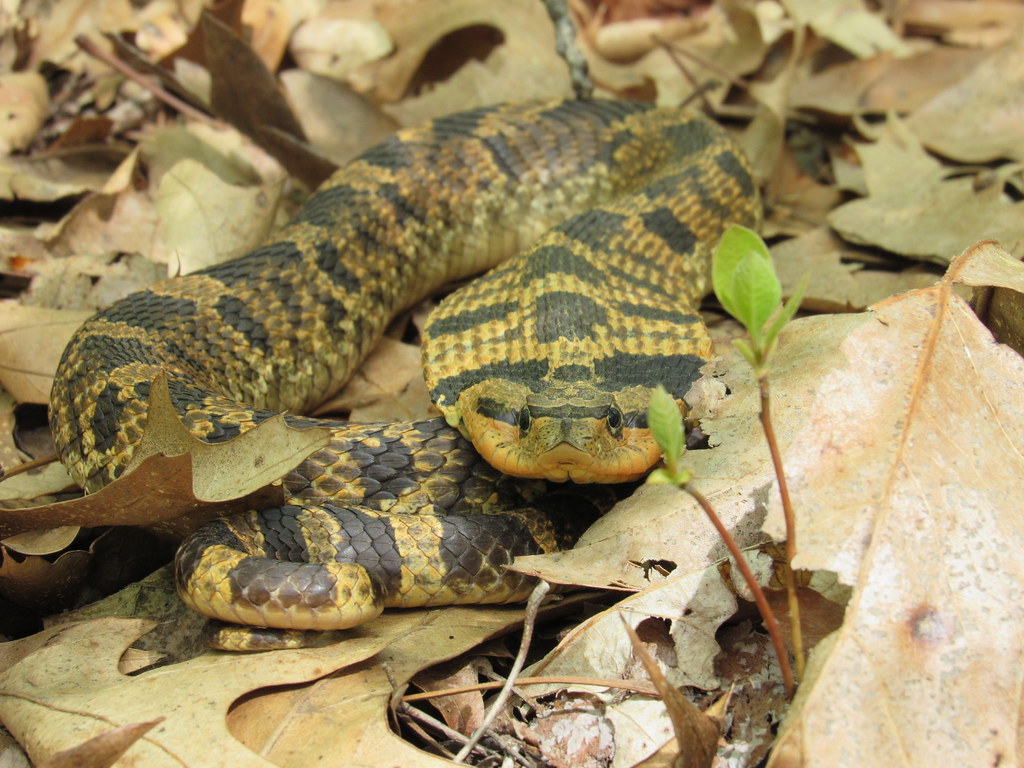 We let it be and wandered over to some trails.  Along one of them, a Prothonotary Warbler (Protonotaria citrea) nests in a little box, putting on a good show for us and a couple other birdwatchers. Thislocation is fairly far north for a Prothonotary, which is primarily a southern bird that creeps north in Illinois along the river valleys.  Pretty much everyone else had binoculars, because that afternoon was the start of the Indiana Dunes Birding Festival.  It was like Montrose all over again, except fewer giant cameras and ridiculous clothes. 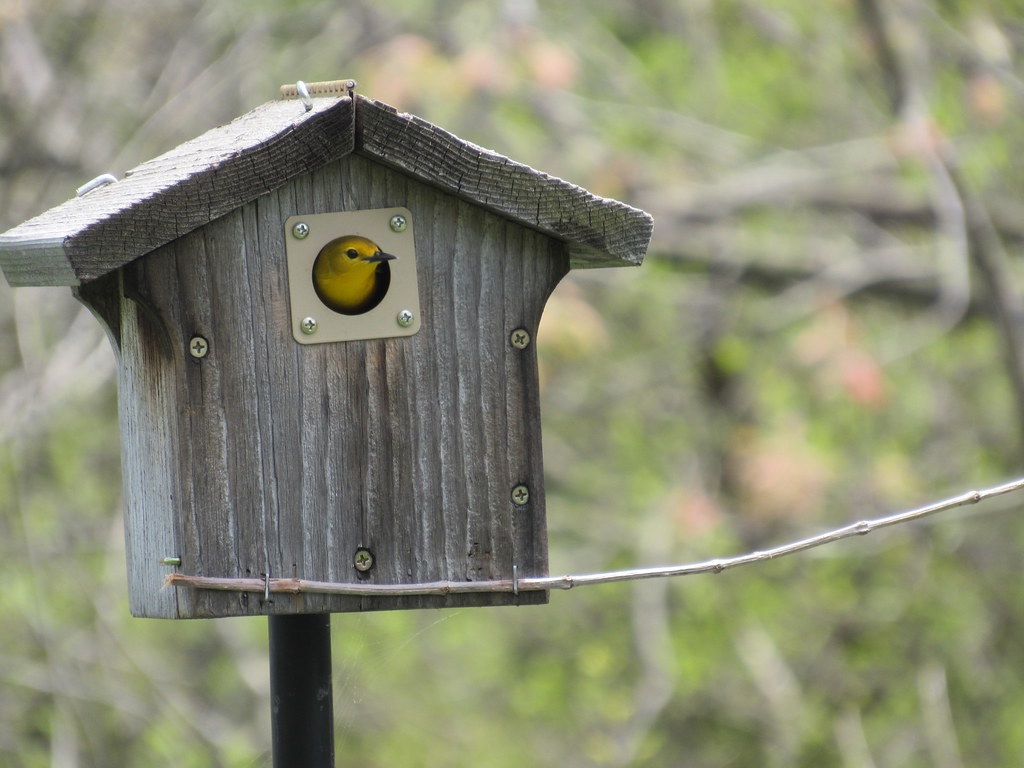 Above the Prothonotary Warbler, a little Ruby-throated Hummingbird (Archilochus colubris) sat up in a tree.  I’ve not seen very many hummingbirds this year, so it’s a joy to see.  I don’t know if my lack of hummingbirds is a personal coincidence or just an actual lack of them.  Time will tell. 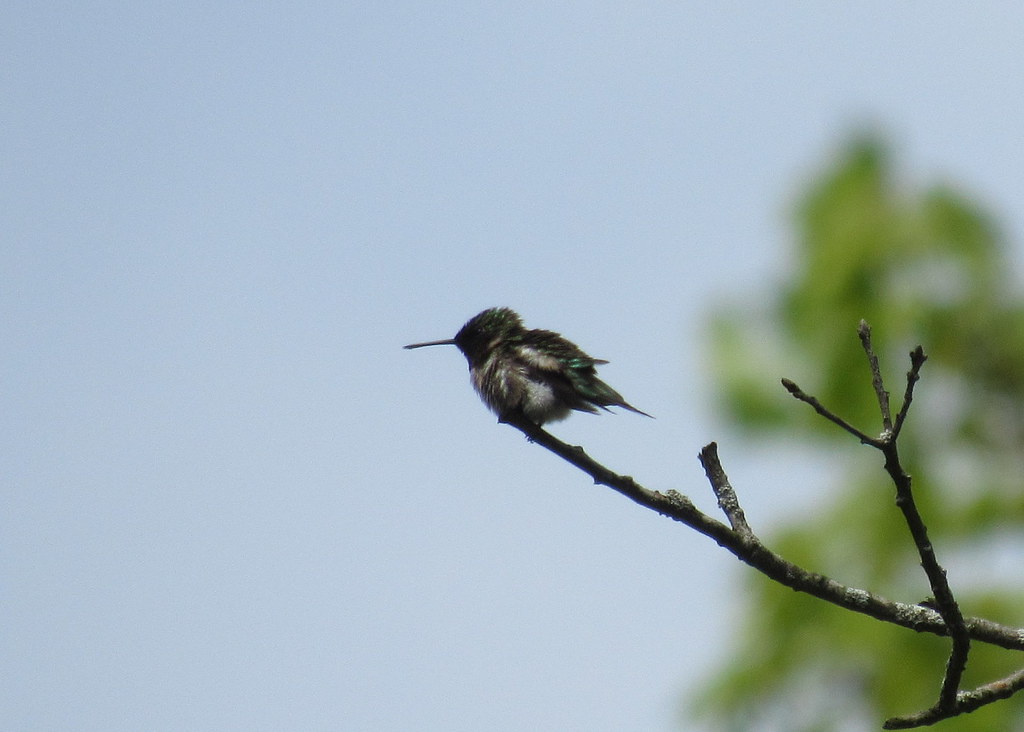 Into the woods, and the late spring plants were in full flower.  My first Dwarf Ginseng (Panax trifolius) bloomed along a creek- hundreds of small white flowerheads.  This plant somehow doesn’t grow wild in Illinois, so it’s a treat to see here. 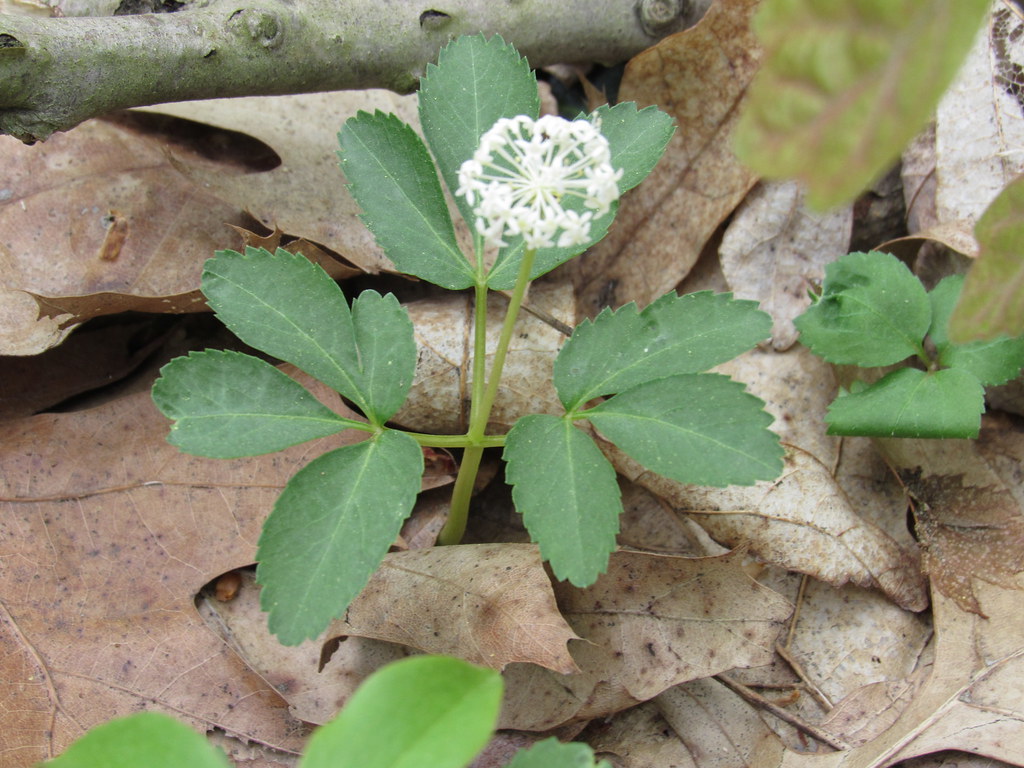 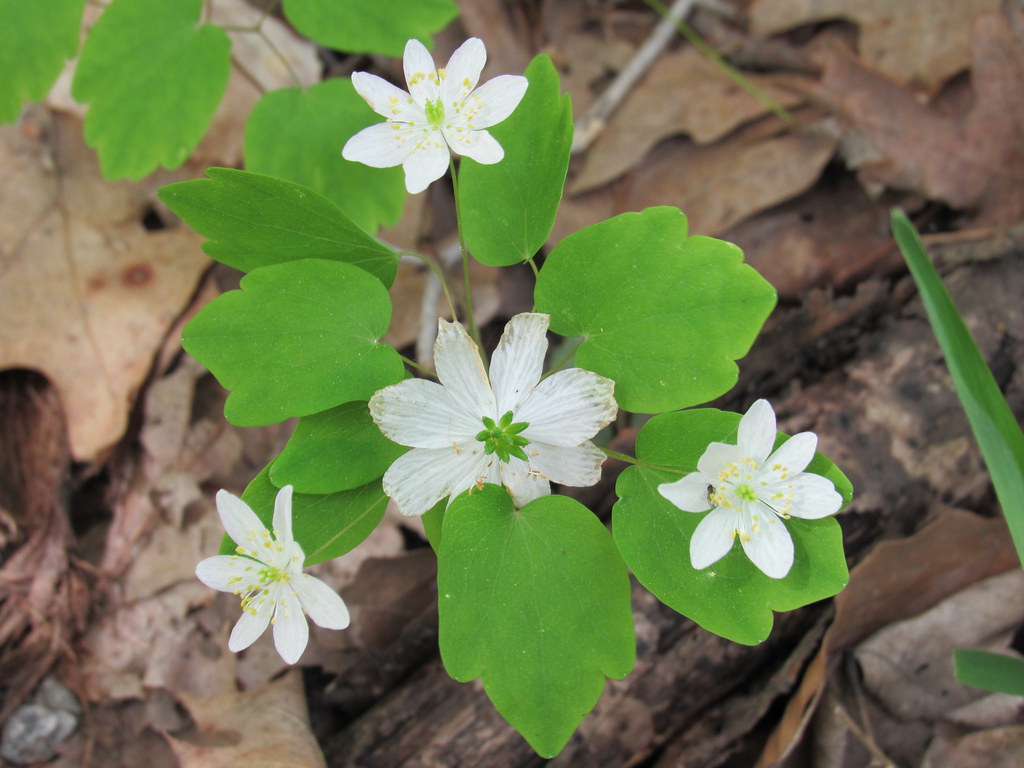 The woods here resembled late April back in Southern Illinois, right down to the Cerulean Warblers and Louisiana Waterthrushes calling from the trees above: 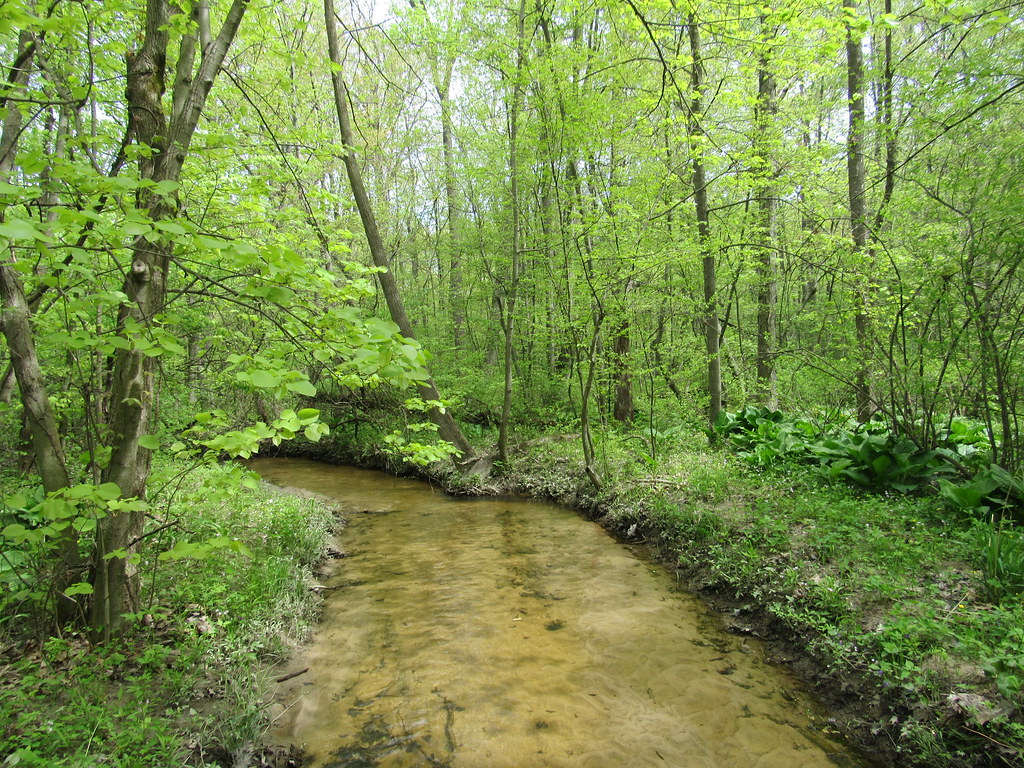 However, the plants proved it to be distinct… this Great White Trillium (Trillium grandiflorum) doesn’t grow wild in southern Illinois, for instance.  It’s more of an Appalachian plant. 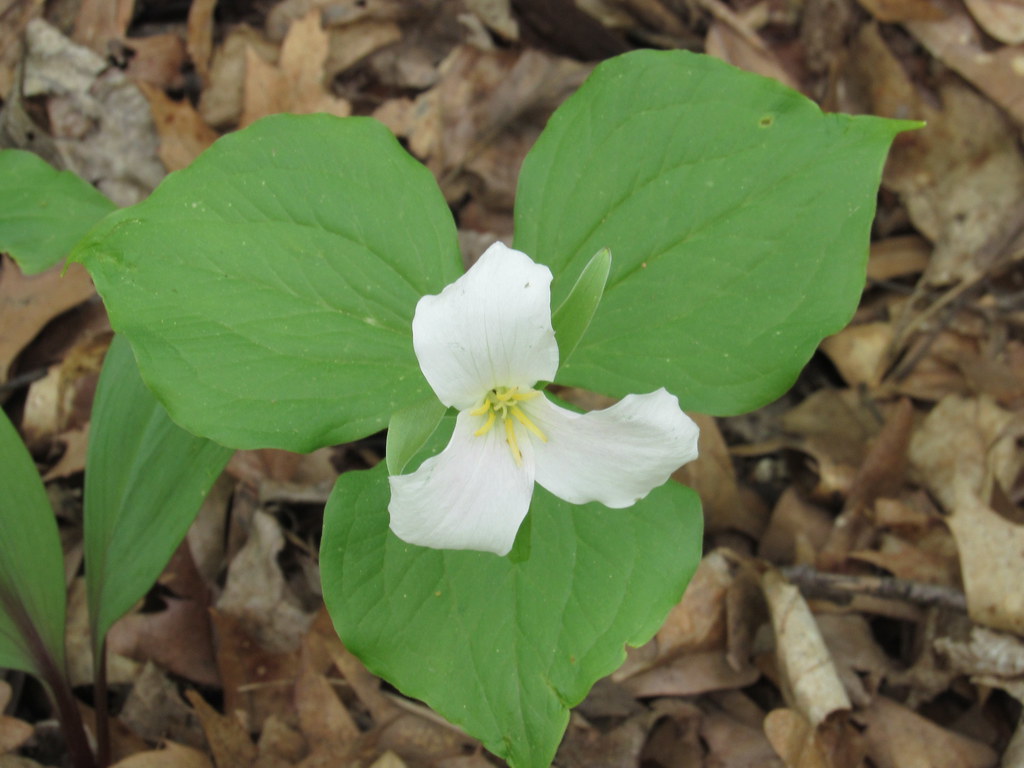 White-crowned Sparrows (Zonotrichia leucophrys) were abundant, migrating back to the tundra from which they came.  One was enjoying the picnic area: 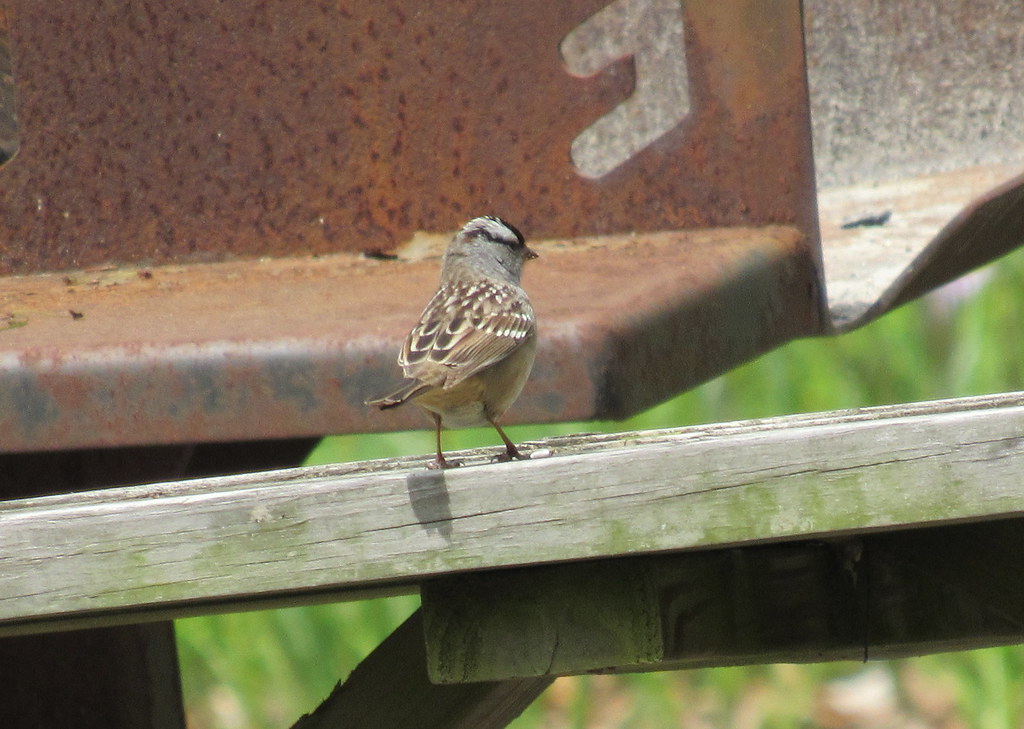 Kyle had to go to a lecture, so I went off and explore by myself.  Several migrant warblers were calling and seen as I went down one of the longer trails, stumbling across Wild Lupine (Lupinus perennis) on the way.  This is another calling-card of this area’s biodiversity- Wild Lupine is a plant of the Atlantic Coast and sandy sections of the Great Lakes area. 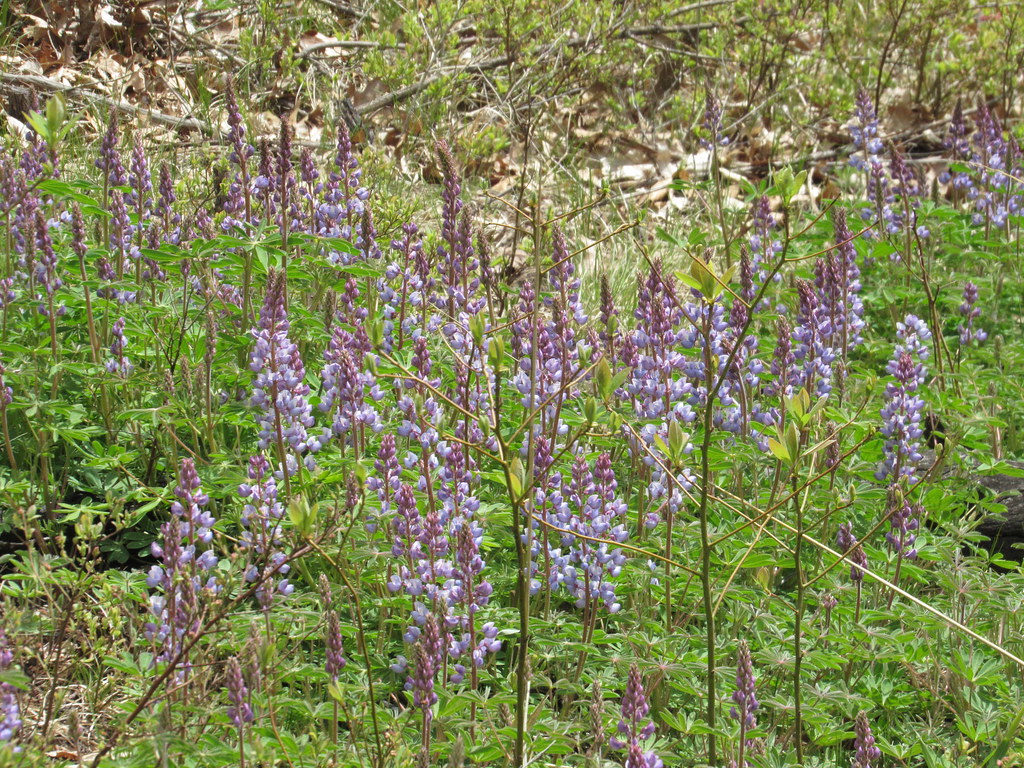 The sand dunes and their environs have over 1400 species of plants, making them some of the most biodiverse habitat in the Midwest.  It’s a joy to walk here- you never know what’s around the next bend, and it can be wildly different from what came before! 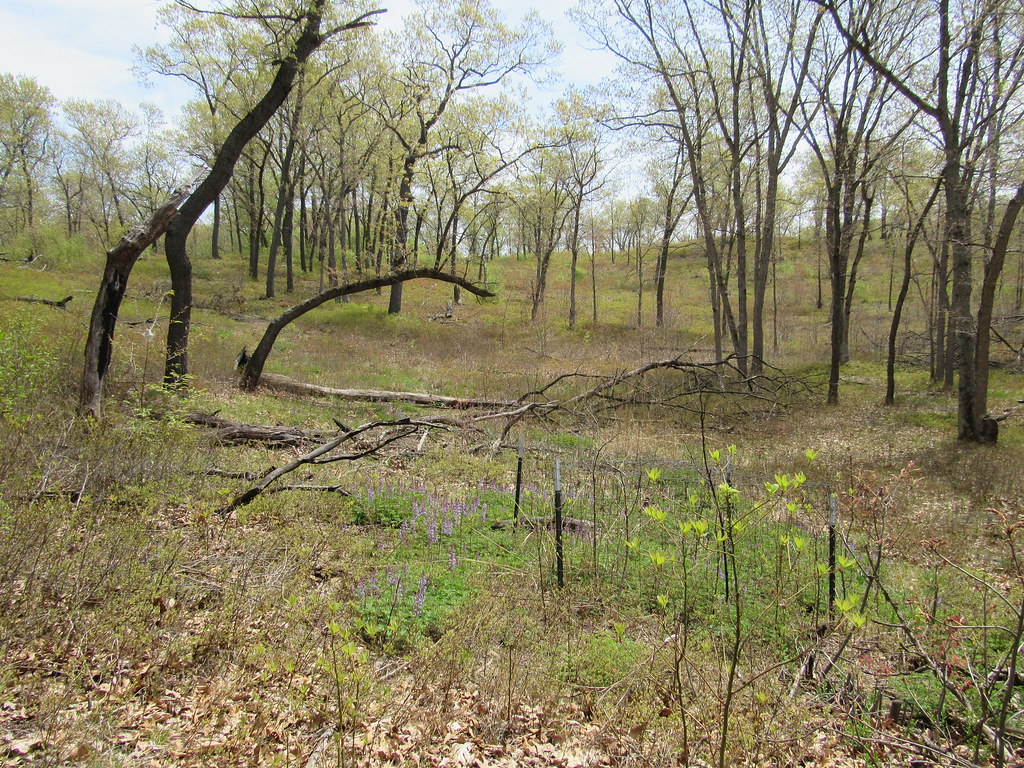 For me, around the next bend was a Golden-winged Warbler pair, a Rose-breasted Grosbeak, and this Bird’s Foot Violet (Viola pedata), a plant of the Great Plains and open dry areas in the South. 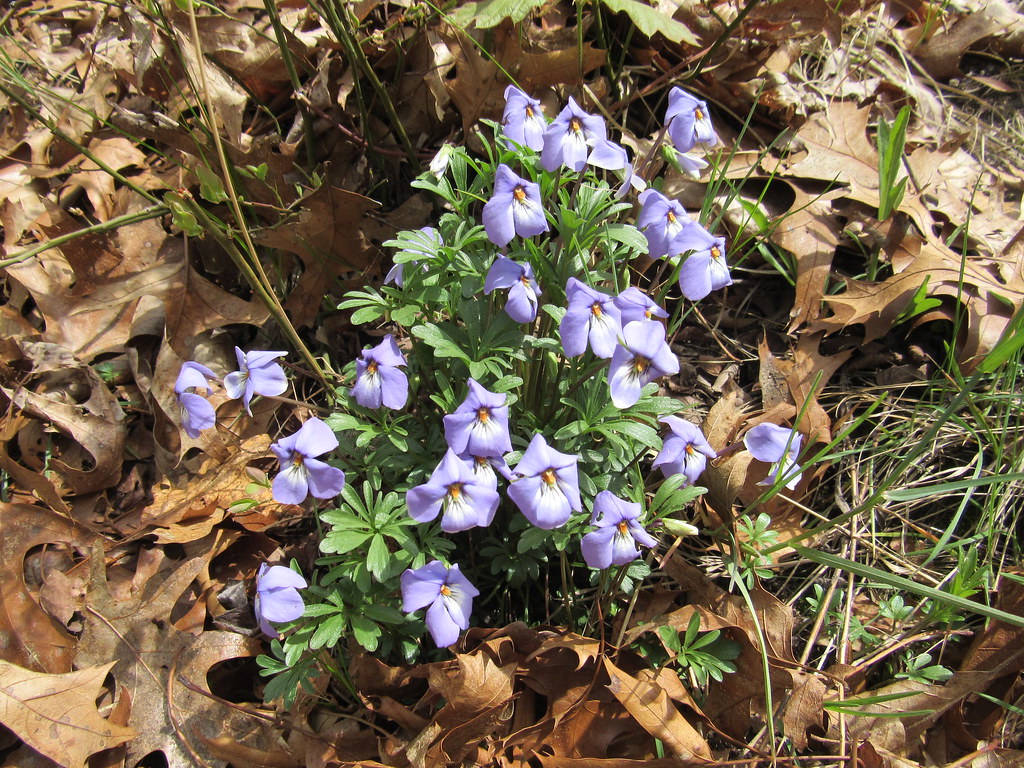 Just behind the dunes, a wet area held many Swainson’s Thrushes, a Bay-breasted Warbler, and multiple tall trees sandwiched between a full wetland and the dryer landscape of the sand dunes themselves.  I love the golden look of trees leafing out- it’s Lothlorien in the real world. (I haven’t referenced J.R.R. Tolkein’s Lord of the Rings in awhile… it’s been too long.) 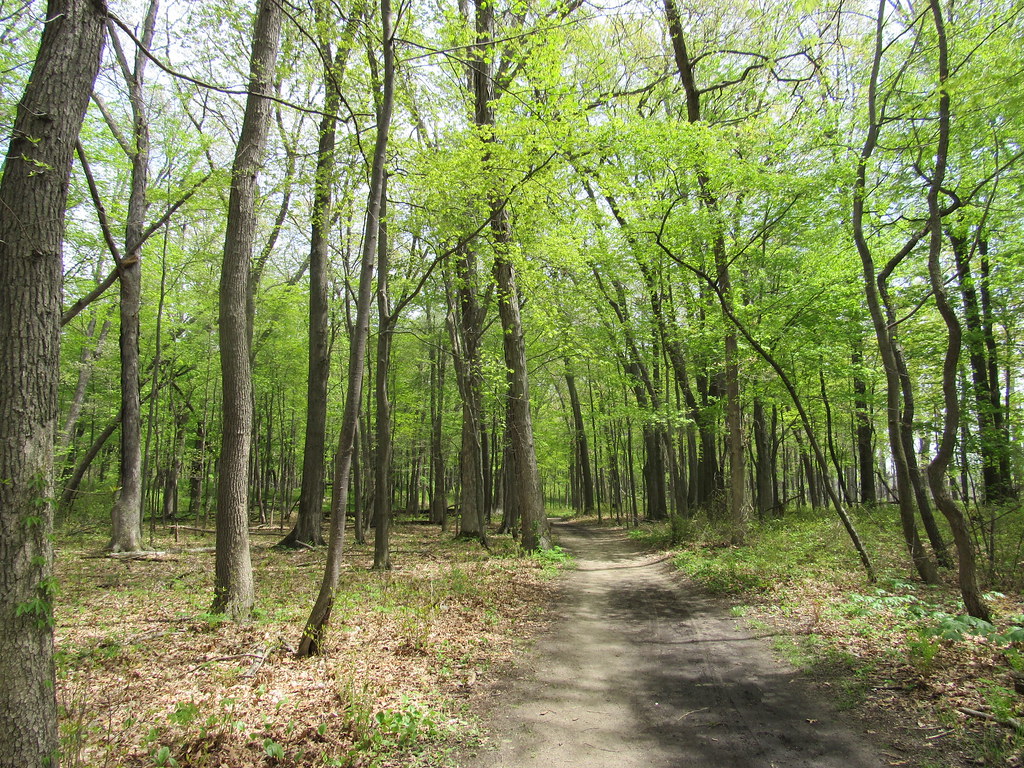 Up on the sand dunes again, and a Least Flycatcher called.  Lowbrush Blueberry (Vaccinium angustifolium) covered a dune, their little white bells sweet-smelling and everywhere. 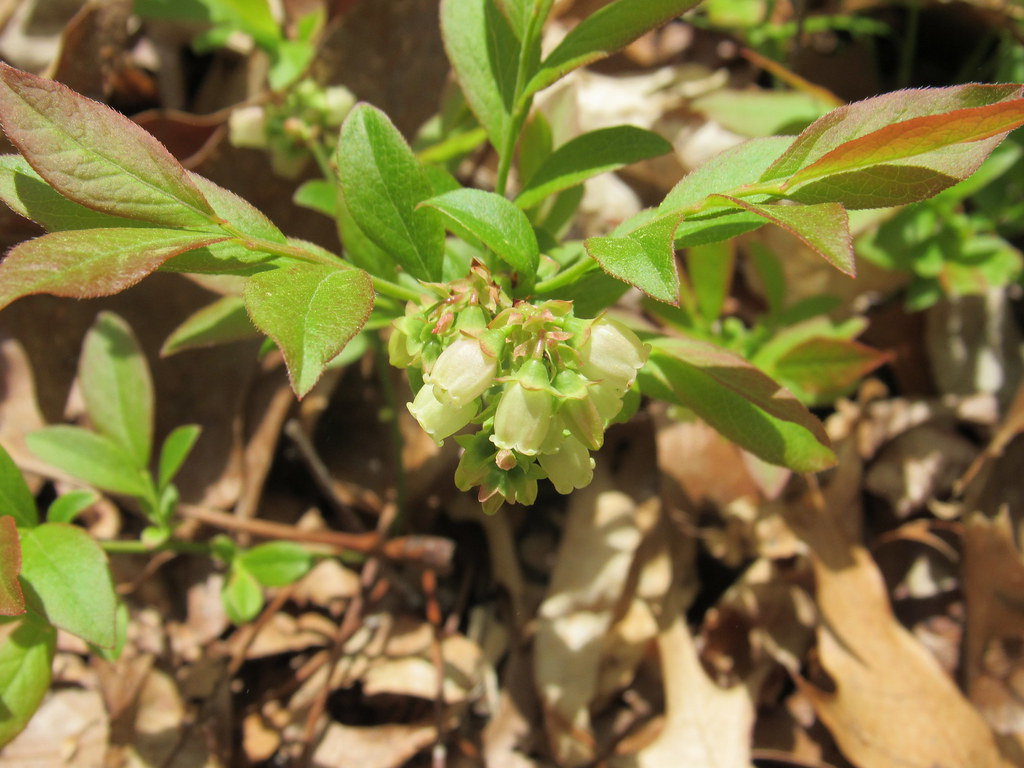 Alongside the blueberries, Starry False Solomon’s Seal (Maianthemum stellatum) bloomed, also one of the most abundant plants in the dryer sandy woods of the dunes. 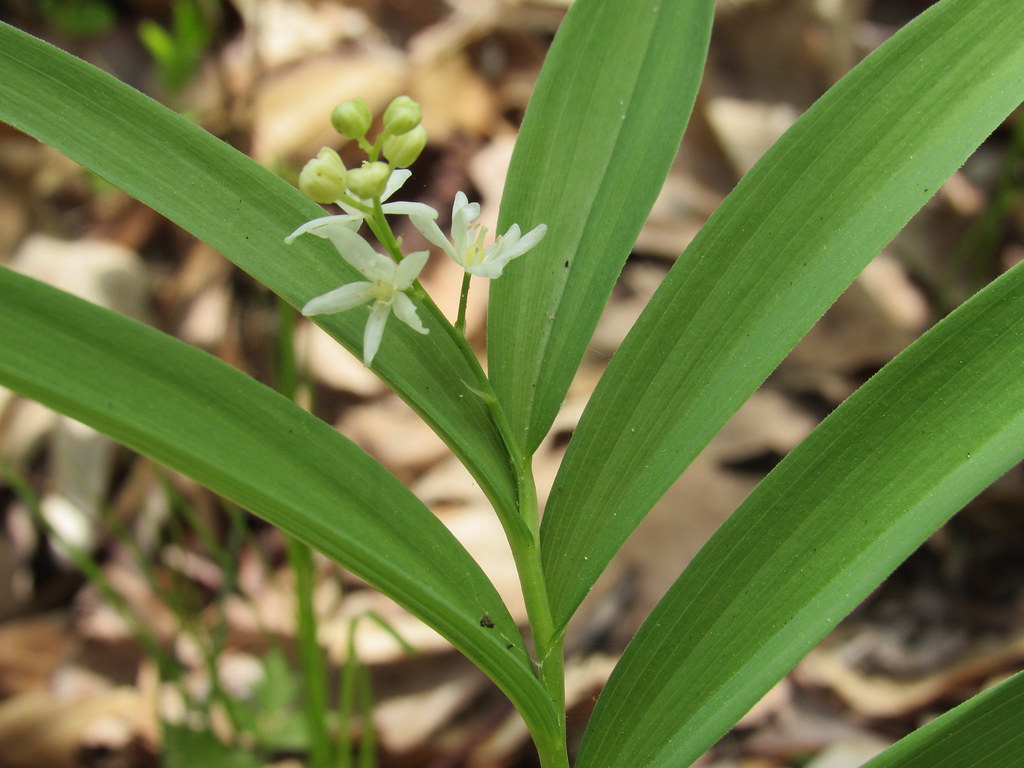 Back down in the woodlands, and I met up with Kyle. Wild Geraniums (Geranium maculatum) bloomed abundantly- a sign of the woods in late spring.  Tennessee and Blackburnian Warblers called above us, not caring that it was one in the afternoon. 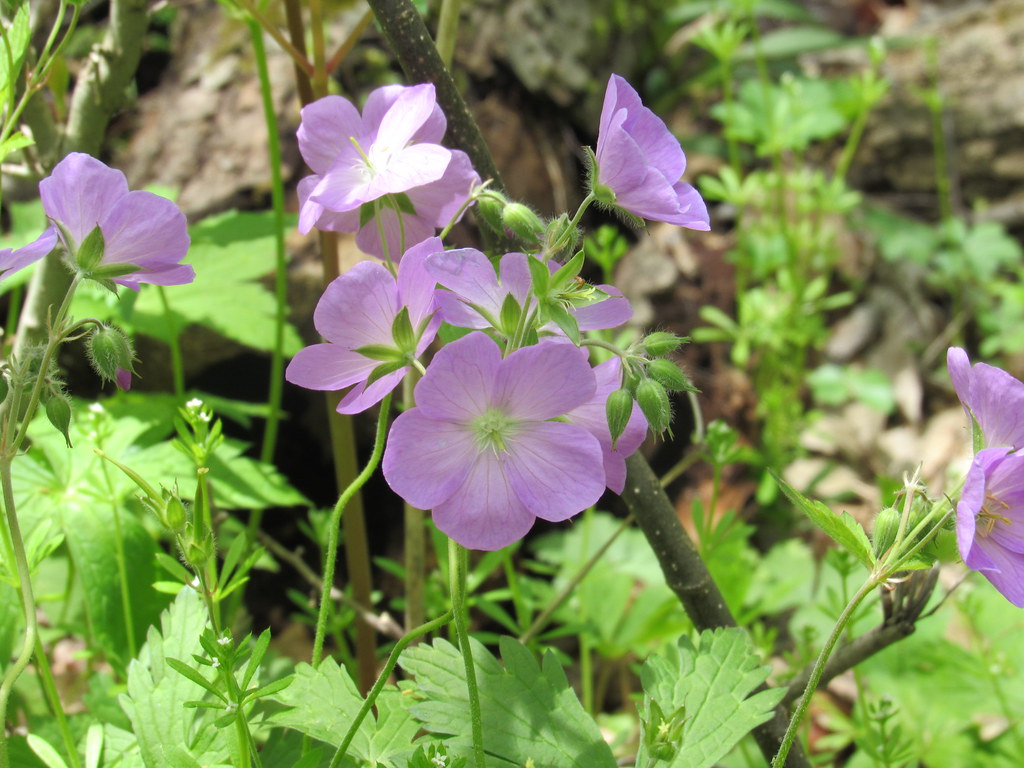 Alongside the geraniums, Woodland Phlox (Phlox divaricata) bloomed, something I’d seen two weeks before in equally full flower down in Southern Illinois, and which didn’t seem to be up yet at Illinois Beach State Park. Acadian Flycatchers called above us as we flipped a couple logs… 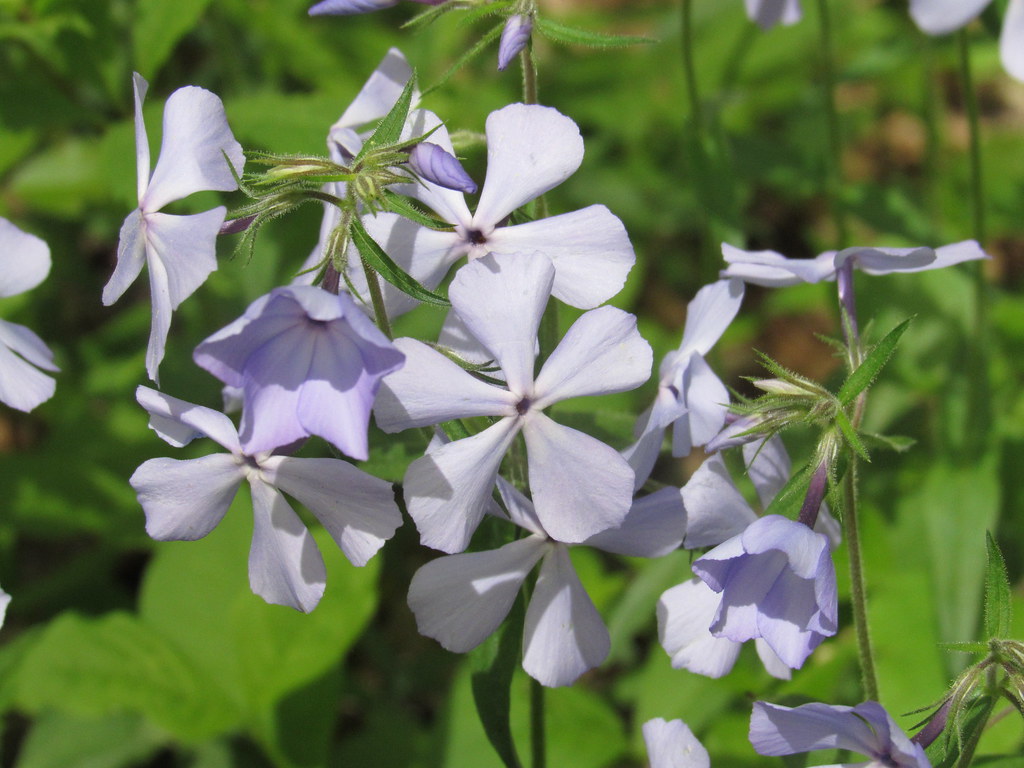 The log-flipping proved successful, as Red-backed Salamanders (well, lead-phase ones) stumbled out into the sunlight.  We carefully replaced their logs- the herping was going well! 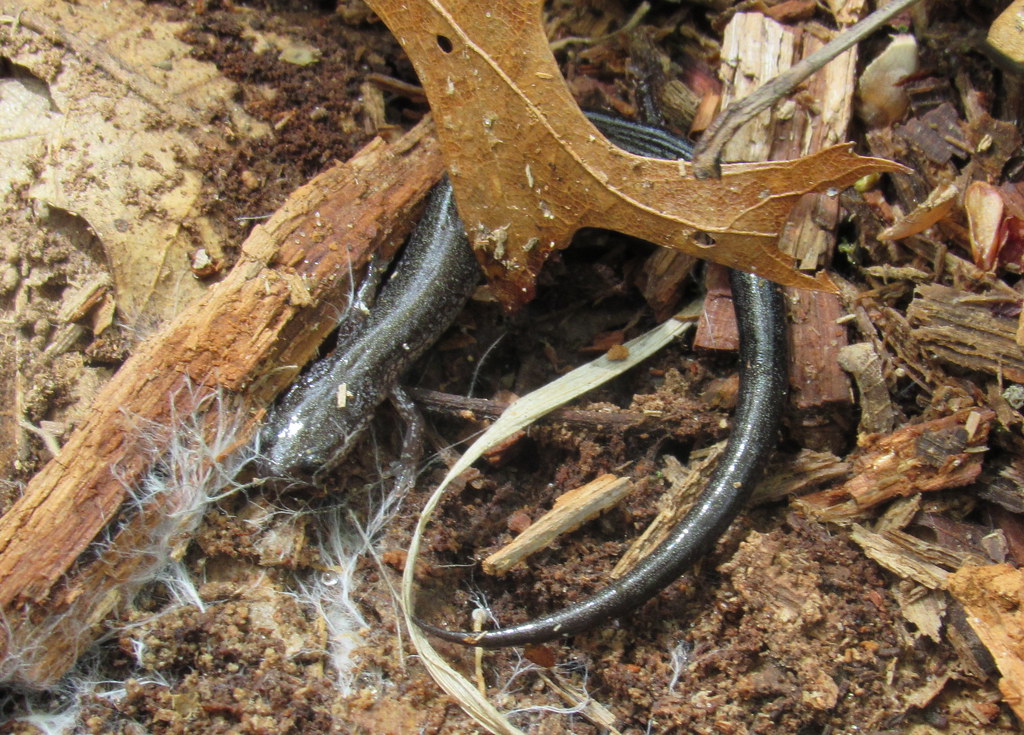 All too soon, it was time to return to home, and so I stopped by the visitor’s center to watch their feeders briefly.  Another Ruby-throated Hummingbird fed as I watched from the window: 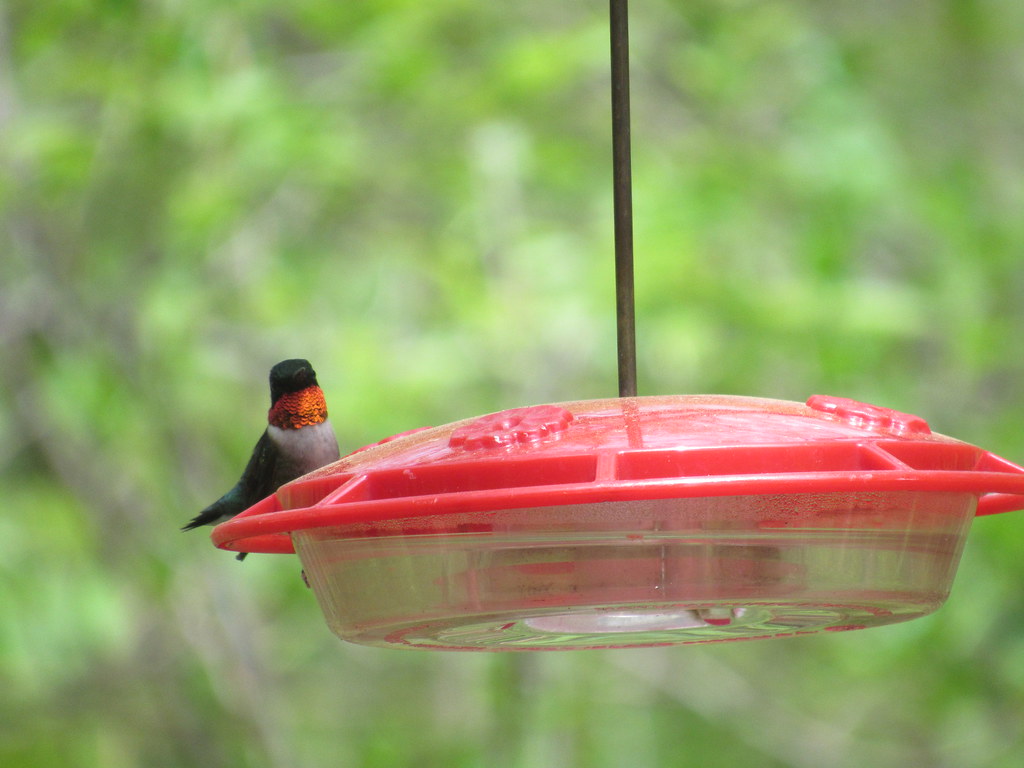 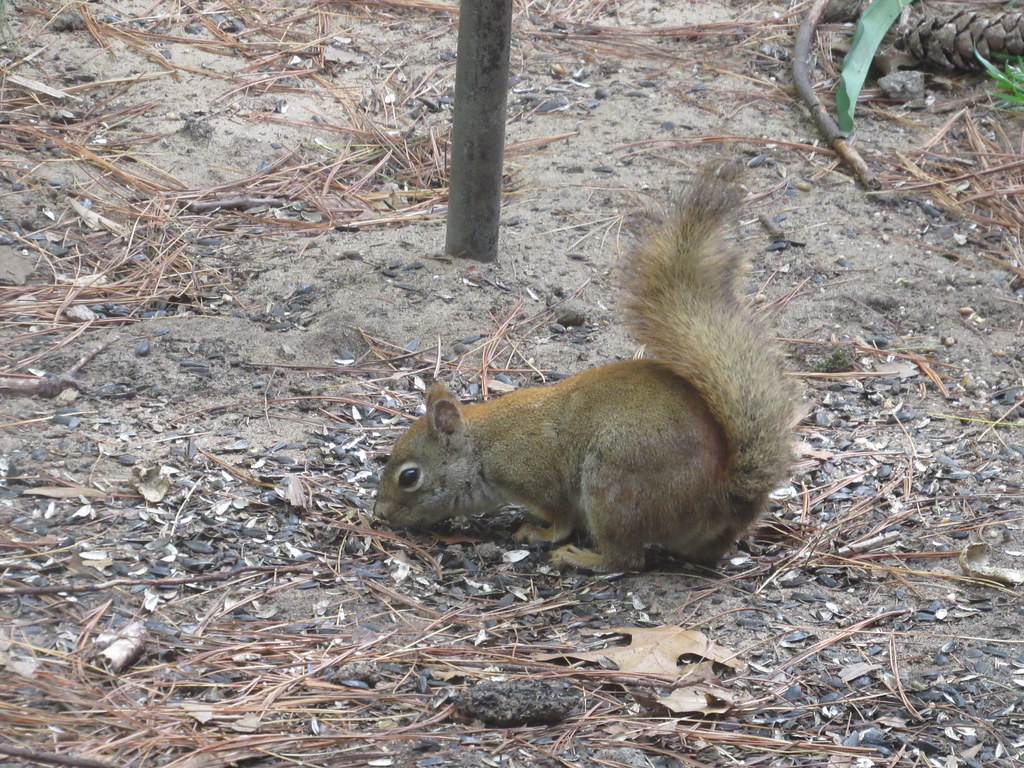 I could tell you how Red Squirrels differ from Eastern Gray Squirrels (Sciurus carolinensis), but why not just show you instead? 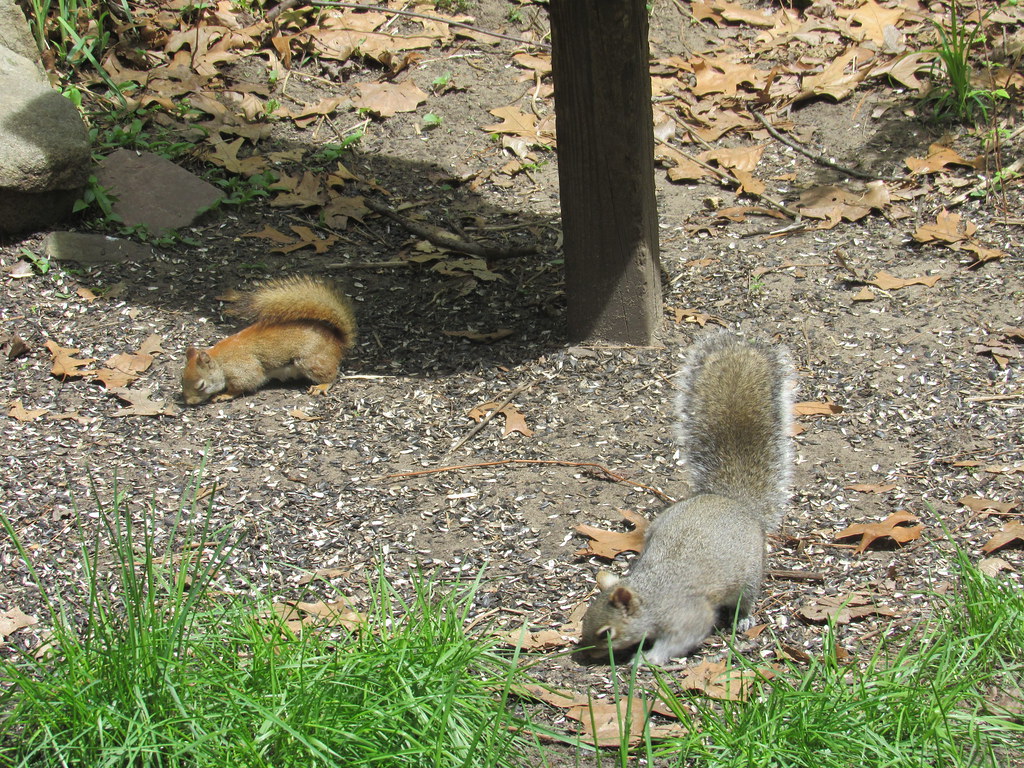 Behind the observation window, a map shows why this area has a birding festival, and to a lesser extent, birds to see.  I didn’t really get a great photo of this map, so I’ll explain- basically, birds don’t want to fly over the middle of Lake Michigan because there’s nothing there except water.  So they stick to the edges, east and west, that meet up at Indiana Dunes.  Birds then go north and south from Indiana Dunes, often using this spot to rest and refuel on their journey north. 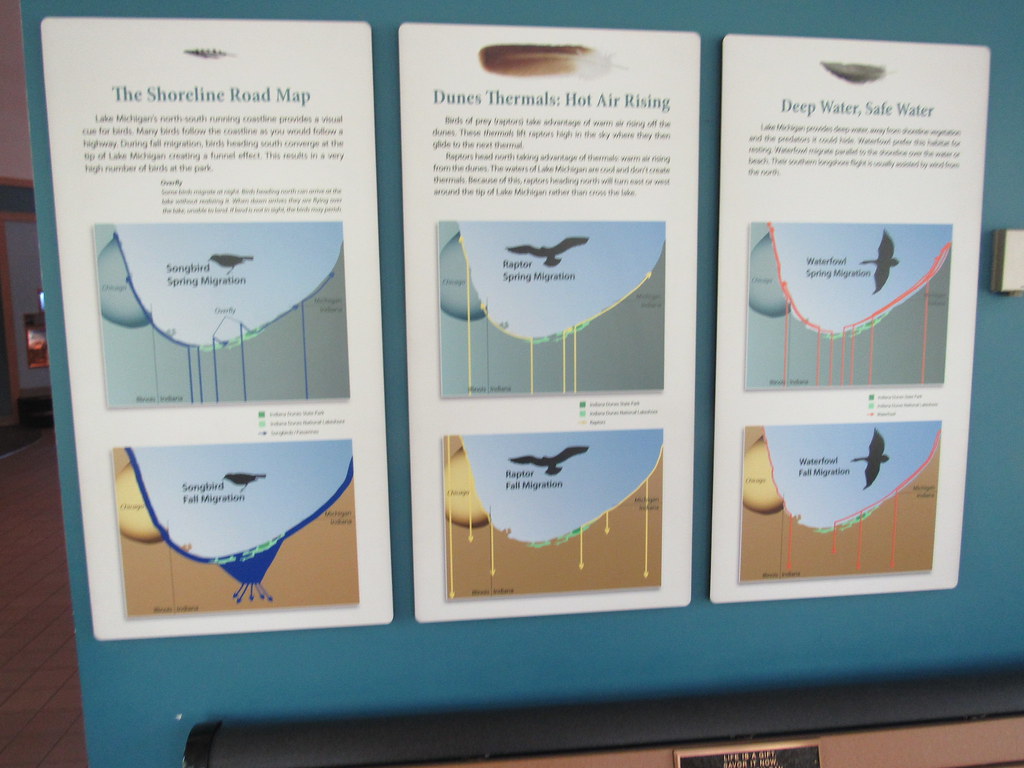 After this, we went to the Observation Tower, where my friend Kyle worked as a bird counter.  He would take note of all the birds passing by the observation tower, which could be in the thousands and often was, on many days.  To learn more about this, read the official blog: https://indianadunesbirding.wordpress.com/ 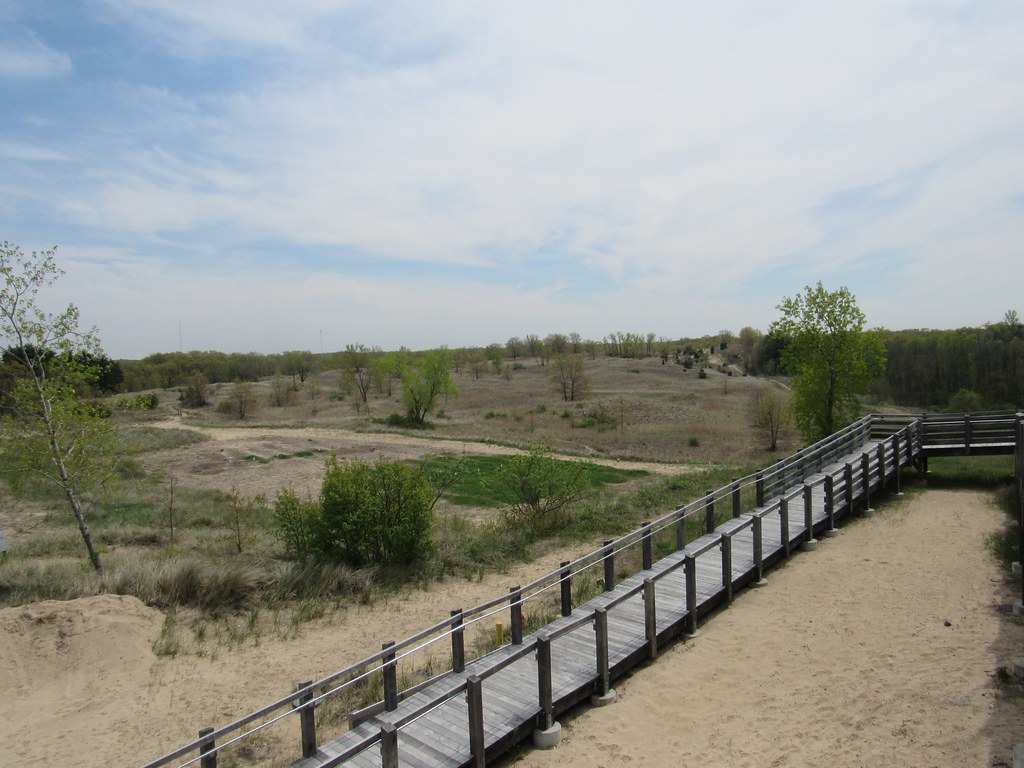 Here’s Kyle in position, waiting for something to fly by.  Not much did at that time- it was 2 in the afternoon, which is basically nature’s siesta time.  It gets much more active at dawn and dusk. 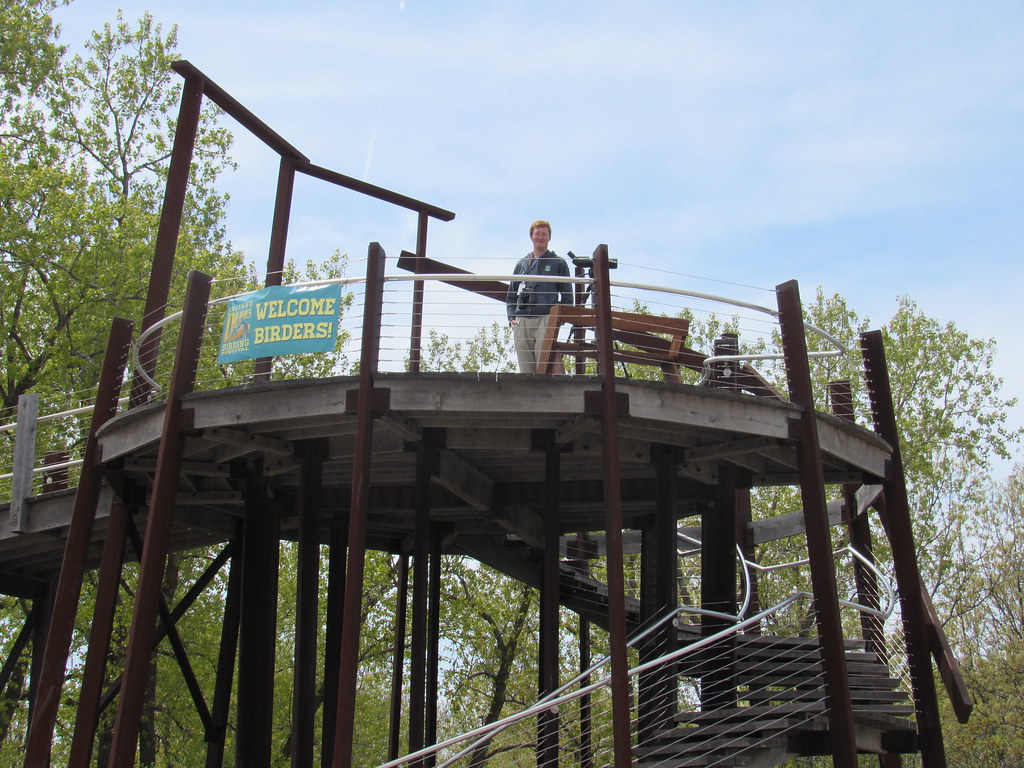 Below the tower, a sign shows all the birds counted from the tower this season (mid-March to the end of May, though this sign was photographed in mid-May).  After saying goodbyes, I then booked it out of town, as I had a four-hour drive home.  By the time I’d left, I’d seen 81 species- it’d been a great several hours!  Now, I could do the same thing at Montrose, probably, but to see all the plants and life- this is by far the best birdwatching or nature-anything location near Chicago.  I will not be moved on that.  Indiana Dunes is a glorious spot, and I look forwards to my next visit here.

I had intended to stay a further two days and go on a big day of birding with some friends of mine.  However, work got in the way.  That being said, here’s their blogpost about that big day, which I did help to plan slightly: 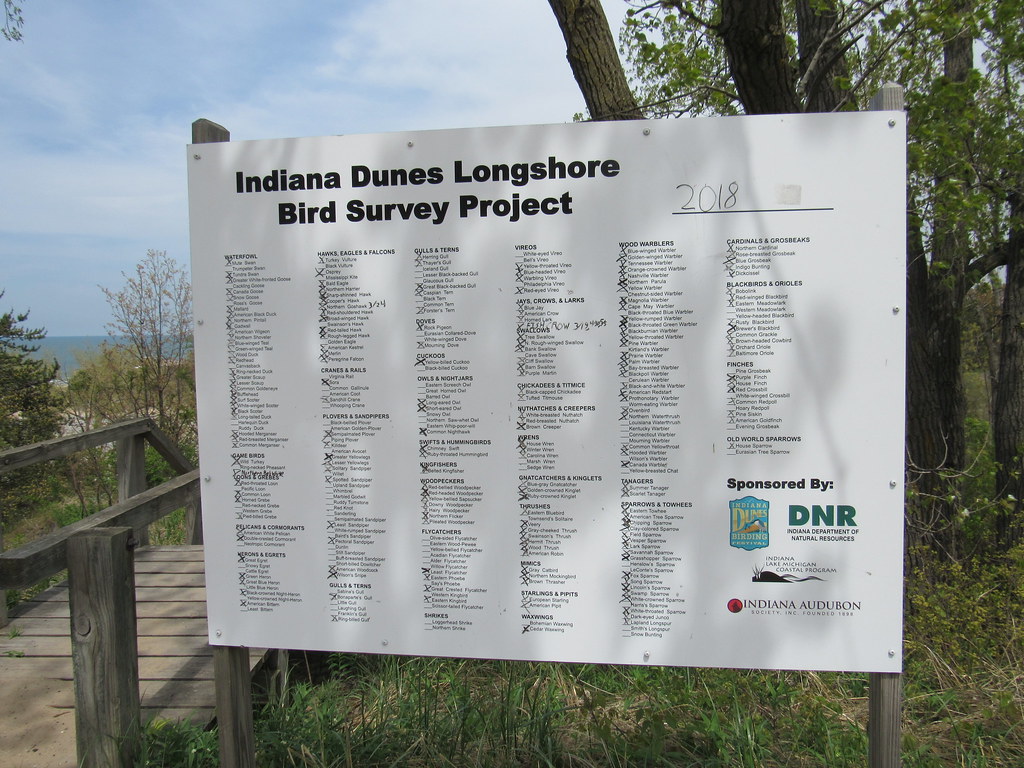