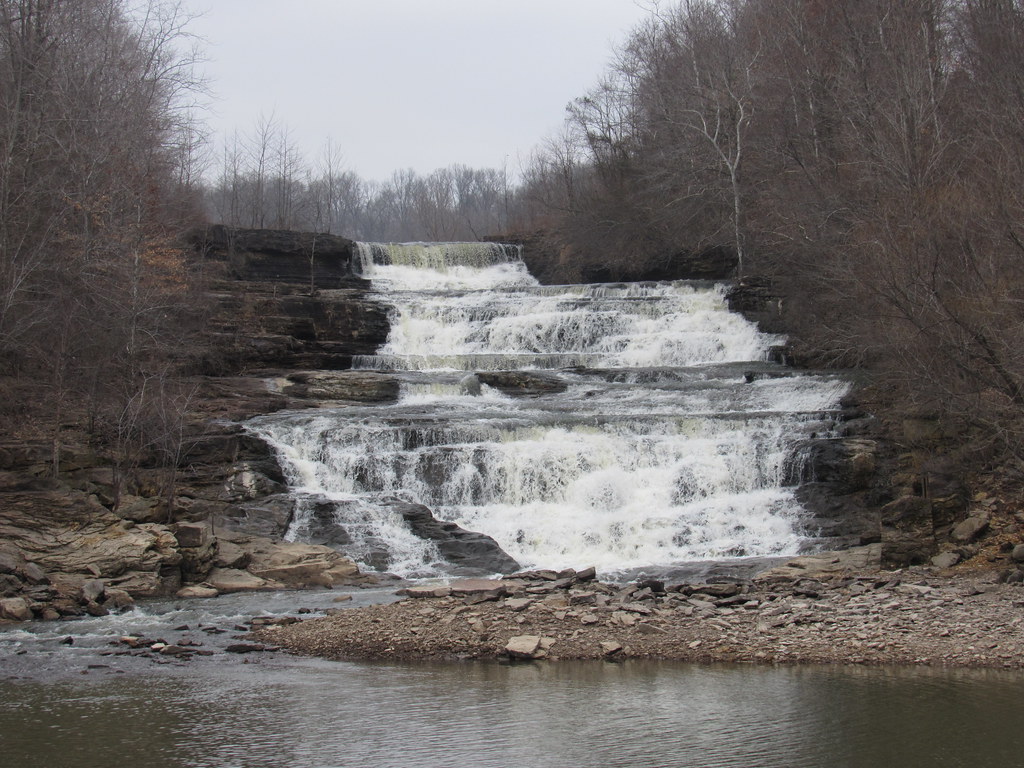 So, as I promised, here’s the first in a series of shorter blogs.  Yesterday (3/8/19) I went out to Kinkaid Lake Spillway, which is an artificial waterfall designed to drain a lake, with the side effect of being the best-looking tiered waterfall in southern Illinois. The road to Kinkaid Lake Spillway is narrow but contains wetlands on both sides, and I’ve gotten incredibly close to both Pileated Woodpeckers and American Beavers here. 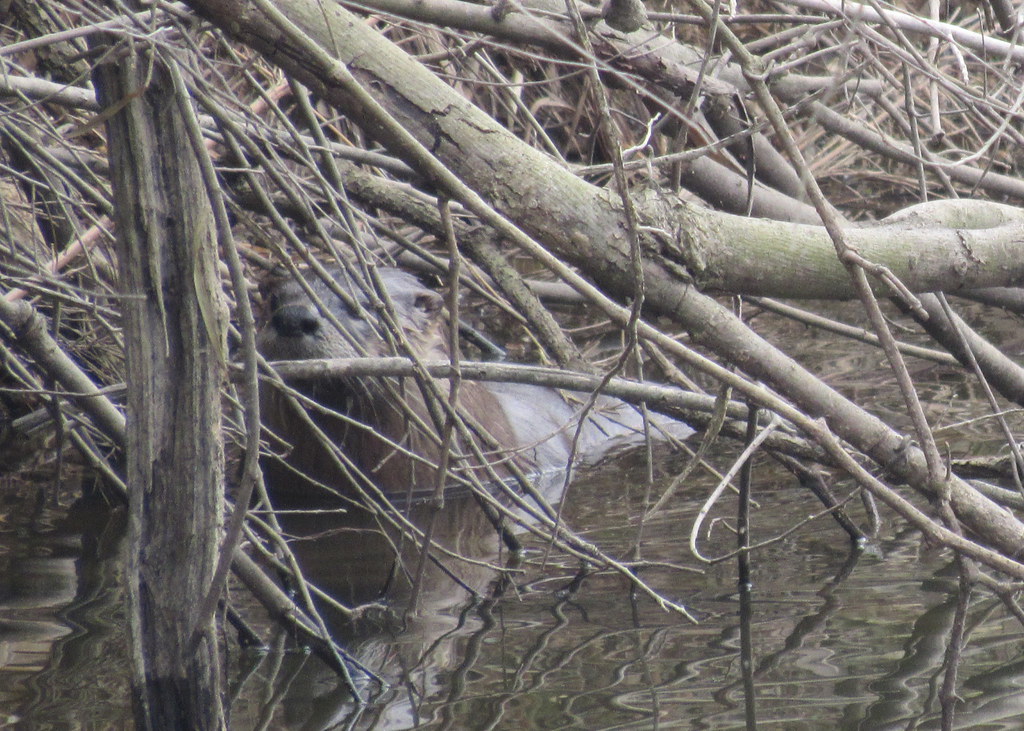 However, my best find yet was this River Otter (Lontra canadensis) hiding under the bank of one of the ponds.  In Illinois, River Otters became incredibly rare in the 1980s, the population dropping down to around 100 individuals, but today there’s River Otters present in all 102 Illinois counties.   It’s one of the best recoveries of a protected, non-bird species in this state. 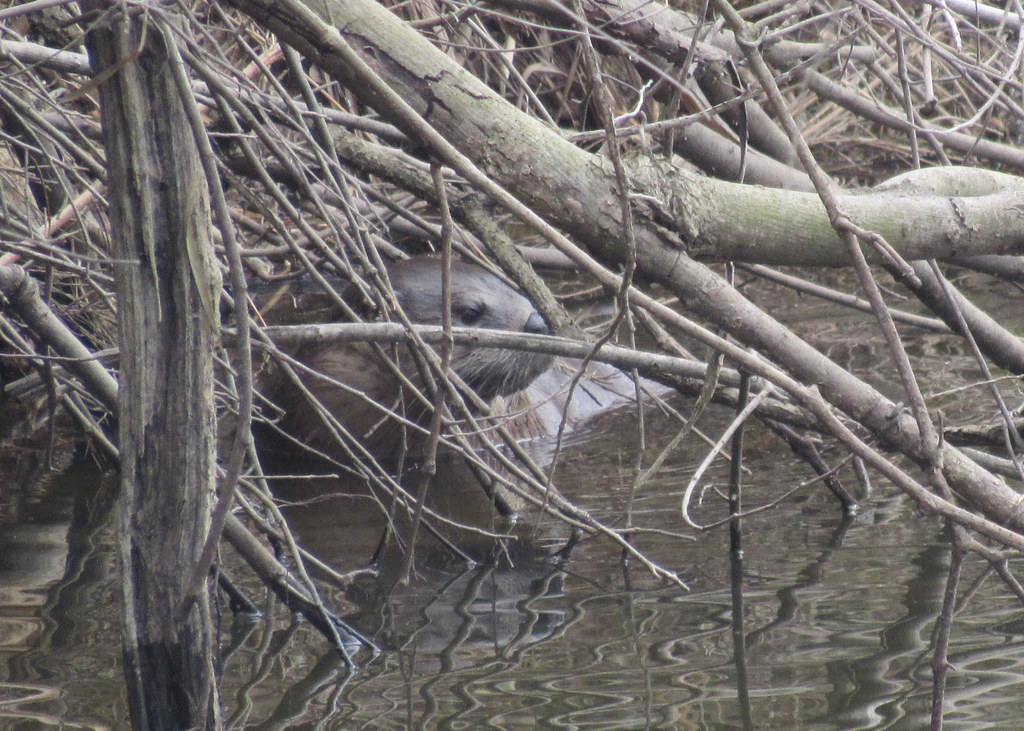 After a few minutes, this River Otter dropped out of sight and I moved on to look for seedpods.  As I’ve previously mentioned, I’m participating in the iNaturalist Illinois Botany Big Year (at least through mid-May, after that it’s up to whether or not I get a job in-state) and I’ve started keeping more of an eye out for odd plants.  This time of year, that’s mostly buds and seedpods. 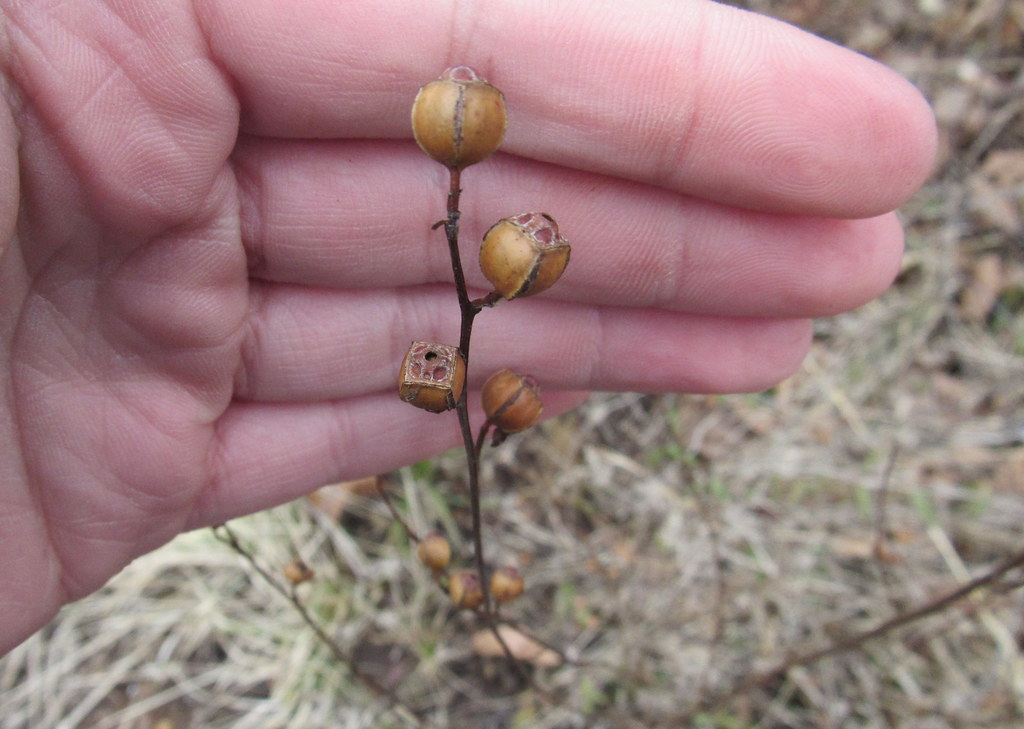 One of those odd plants, growing at the top of Kinkaid Lake Spillway, is this Seedbox (Ludwigia alternifolia), which produces big yellow flowers in the summer and these gorgeous, ornate seed capsules from which the plants derive their name.  I’ve wanted to see these seed capsules for a few years now, so it was a fun treat, especially after finding that otter. 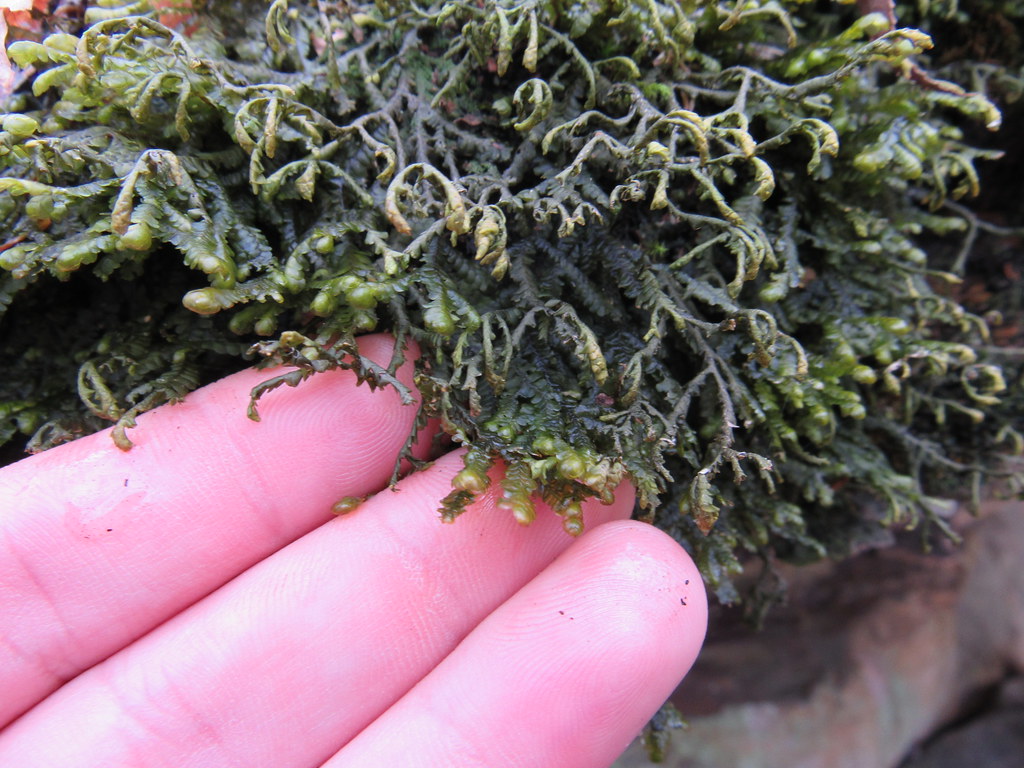 I then ventured over across the dam into a wooded, rocky creekbed, where I discovered this unique leafy liverwort (presumably Porella sp.).  This may look just like a “moss” to some people but it is in fact a different type of nonvascular plant. The minute complexity of mosses and liverworts is charming, especially on a late winter day when nothing else is particularly active. I haven’t found Porella species down here in Southern Illinois yet so this was a pleasant surprise. 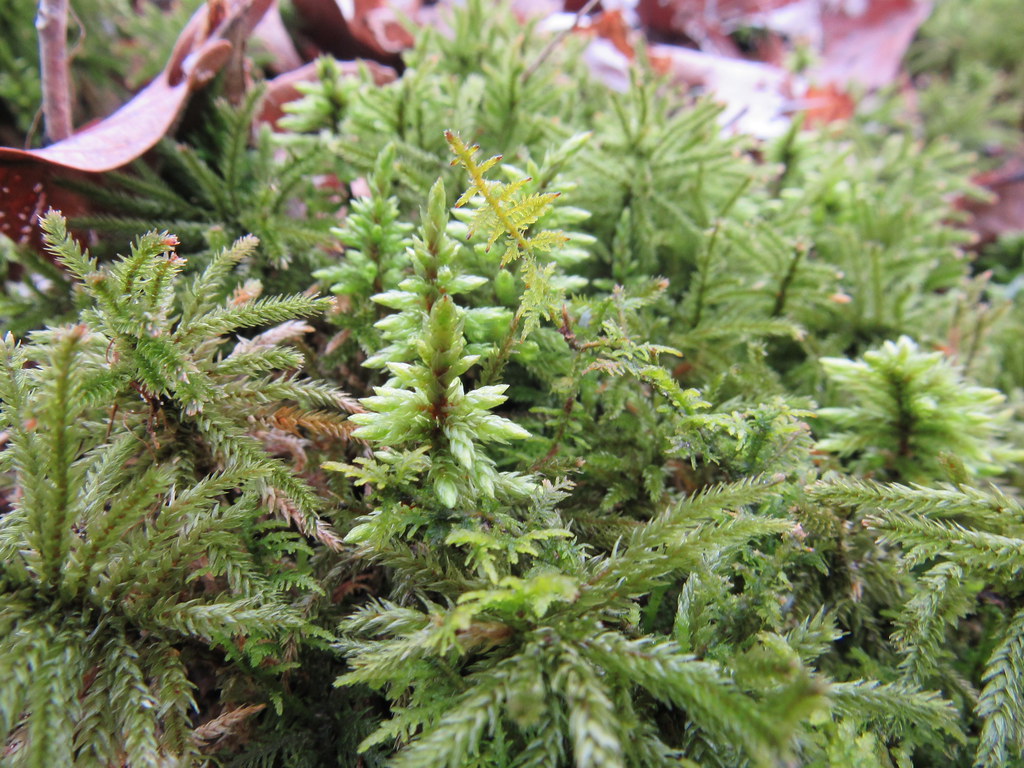 Another pleasant suprise was this American Tree Moss (Climacum americanum).  The shoots may resemble stems and leaves, and in a way they are, but like all mosses (and liverworts) this plant lacks the phloem and xylem veins that transport nutrients and water up and down stems (as found in “vascular” plants).  New shoots resemble little Christmas trees, thus “Tree Moss”. 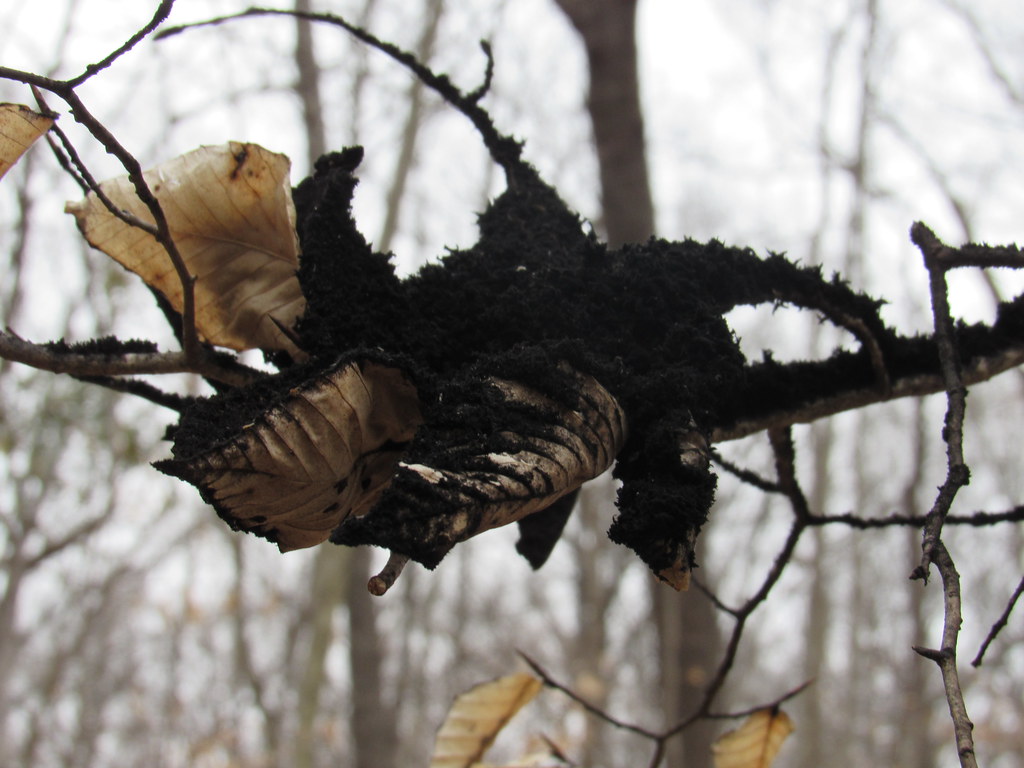 This bizarre, ash-like growth on the  American Beech (Fagus grandiflora) is a unique fungus known as Beech Sooty Mold (Scorias spongiosa).  It isn’t attacking the tree directly at all.   Instead the mold feeds upon the sugary waste of Beech Blight Aphids (Grylloprociphilus imbricator), a species of aphid that only eats American Beech sap.  Saps in trees are incredibly sugar-rich, so the aphid squirts out the extra sugars it doesn’t eat in its poop, and the Beech Sooty Mold eats the the sugars, in an excellent example of recycling.

Beech Blight Aphids are also sometimes referred to as “Dancing Aphids” and I’ll post a YouTube video showing why they get that name:  https://youtu.be/yxc4xWQrT6M

Once I’d wrapped up at Kinkaid Lake, I drove around the Mississippi River bottoms and saw hundreds of ducks, most at great distances.  If you want to see a few photos of them they’re on my iNat page but overall I was unhappy with how well those photos turned out, although quite thrilled to see such abundant migration.  So I went to Fountain Bluff instead to look at that waterfall, and unlike Kinkaid Lake Spillway it was frozen solid! 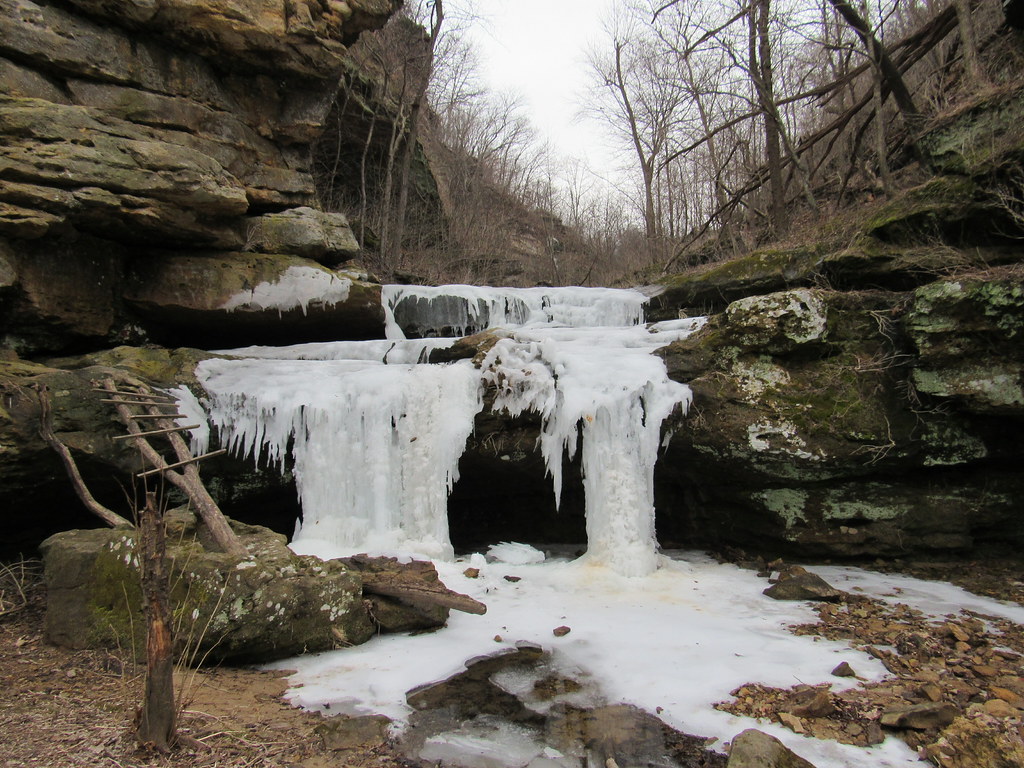 After inspecting the frozen waterfall,  I wandered over to Oakwood Bottoms, where amid the twilight migration of 10,000 Mallards (I subtract not a single mallard)  I got to hear an early American Bittern doing its bizarre “water-dropping” call.  In order to learn more about this and hear the sound for yourelf, watch this YouTube video:  https://youtu.be/bAxAEoAVmuc

It was an excellent night to be out, and once it quits thunderstorming out today I look forwards to seeing what I find next!

So, evidently there are orchids in Colorado.  I was somewhat aware of this, but I had zero expectations to find any on my recent visit.  They are getting a separate post from the rest of my Colorado findings, simply because I don’t want to disclose their location, and also because I’m figuring out how to do WordPress blogging.  I’m thinking there will be fewer images per post than before, simply because each image involves more work.

At any rate, the plant above and below is the Spotted Coral-root Orchid (Corallorhiza maculata).  This is one of a group of specialized, leafless plants called myco-heterotrophs that steal nutrients from soil fungi called mycorrhizae, who in turn are trading nutrients such as carbon and water with nearby plants.  Think of this Coral-root Orchid as a bandit, taking goods from a merchant (the fungi).  The merchant may have goods formerly belonging to another person (the plants in the forest), but it traded for them.  The bandit takes, without giving back.  That is basically how myco-heterotrophs work, as parasites upon the forest.

This bandit needs certain conditions in which to hide out, preferably a gentle slope with decaying leaves/needles in an old forest at certain temperatures.  These bandits have to have a large enough population of “merchants” (mycorrhizal fungi) in order to survive, which accounts for some of the specific requirements.  Furthermore, since they have no leaves and only have flowers at certain times of year, and many of them don’t bloom every year, Coral-root Orchids aren’t easy plants to find.  I’ve found two species this year, somehow, though neither was in Illinois.   For some reason, I find  orchids far more commonly outside Illinois, even on the brief vacations I take.

The biggest suprise was a few days later finding the plant above, the Calypso (Calypso bulbosa var. occidentalis).  This is not a common plant, though the spot I visited had several hundred of them.  Some people call this the most beautiful terrestrial orchid in North America, and as a result, they try to grow it in their gardens.

This, however, is probably the worst plant to possibly try to grow in a garden.  For one, Calypso orchids are very short-lived, on the order of about five years.  Furthermore, they simply cannot be transplanted without dying.  They require mycorrhizal fungi to survive, and very specific light, soil and water conditions.  I’ve not read of them surviving more than six months and/or blooming in captivity, at least according to sources I would consider reliable.  Nevertheless, people take them from the wild all the time to try and grow them, so I’m not saying where I found these.

One fascinating fact about these Calypso orchids is that they bait in bees to pollinate them by pretending to have nectar, when in fact they do not.  Bees learn this over time, so Calypso orchids vary their flower patterns slightly to continue tricking the bees. 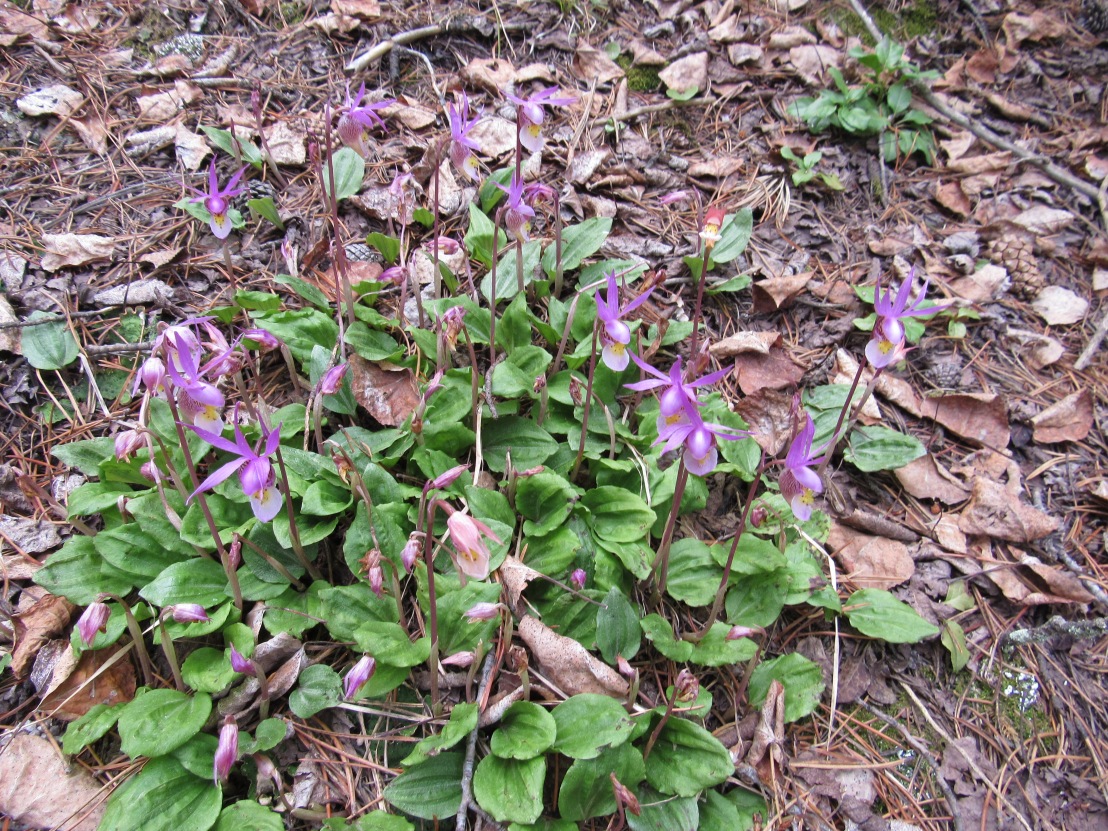 One of the reasons I specified the variety in the scientific name (var. occidentalis) is that there are basically two different kinds, and likely two species, of Calypso orchids in North America.  The other is Calypso bulbosa var. americana, the eastern species that is extremely rare, limited to a few states bordering eastern Canada (and eastern Canada, of course).  This grows singly, and does not form clumps, unlike var. occidentalis above.  I found several dozen clumps like the one shown above.

Perhaps the rarest find of the entire trip was this white-flowered mutation of the Calypso orchid.  It’s rare to find flowers blooming in an entirely different color than they’re supposed to, but it seems, from my very limited viewpoint, that orchids are found with these sort of mutations a bit more often.  I suspect that’s only a personal view, and not supported by the facts, but I do think it’s worth investigating, and hopefully that’s something I get to do someday.  Orchids are my favorite group of plants, and I’m glad to have found these two, likely the best two plant finds of the year.

More Colorado content is coming, as soon as I figure out how to deal with photos more effectively.  This post may remain up for a bit, I’ve got a lot to learn!