So, I’ve officially moved to Southern Illinois, just when I was starting to get to know Central Illinois.  However, before leaving, I took three trips through different parts of the area. 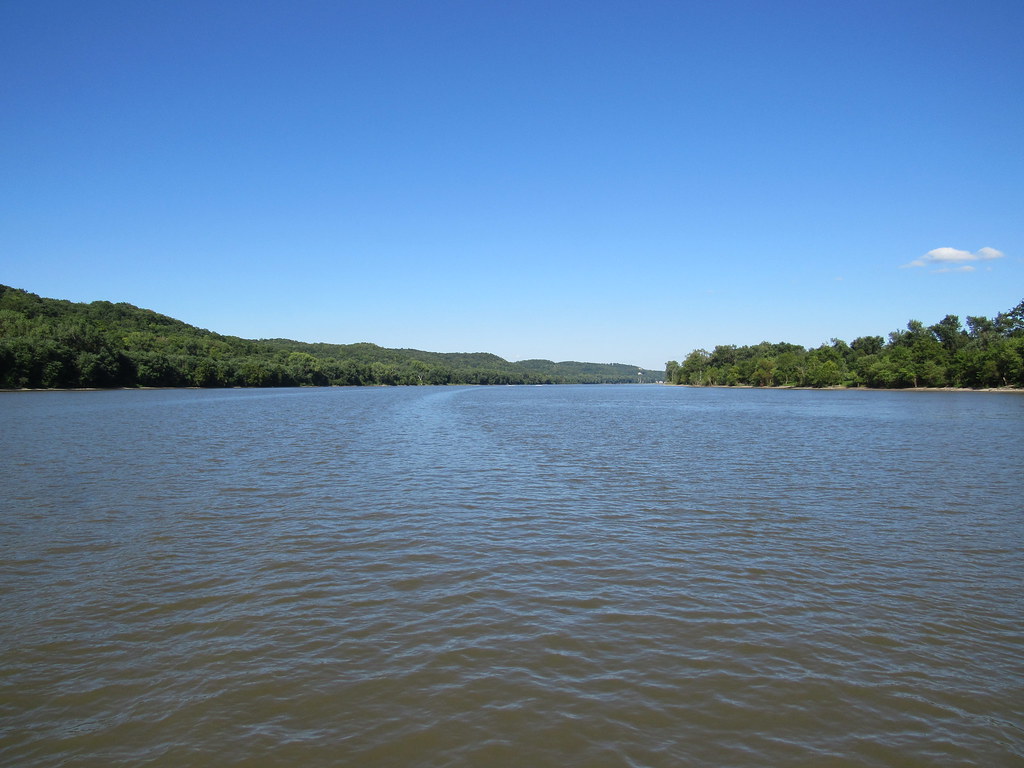 Trip #1 was taking my mom to the wildest part of Central Illinois, Revis Hill Prairie Nature Preserve.   This proved to be more of an adventure than I planned! 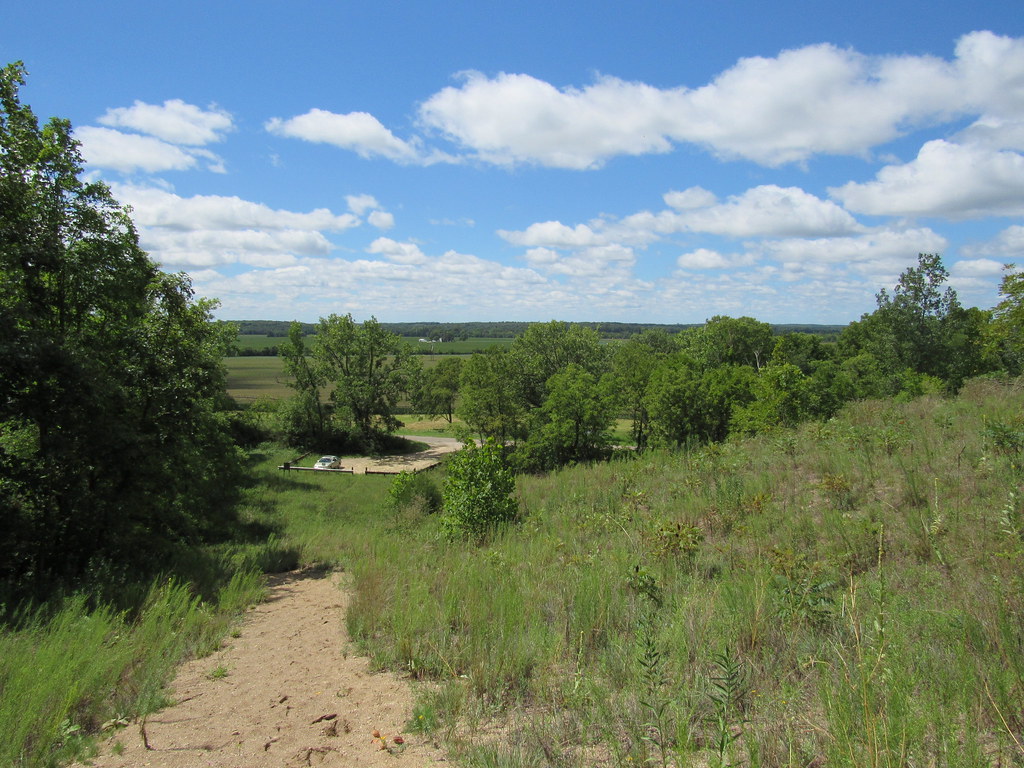 Within about ten minutes, we’d found a Giant Swallowtail (Papilio cresphontes), the largest butterfly in the United States.  While it’s down in numbers from last June,  Revis Hill Prairie is one of the best butterfly spots I’ve ever visited. 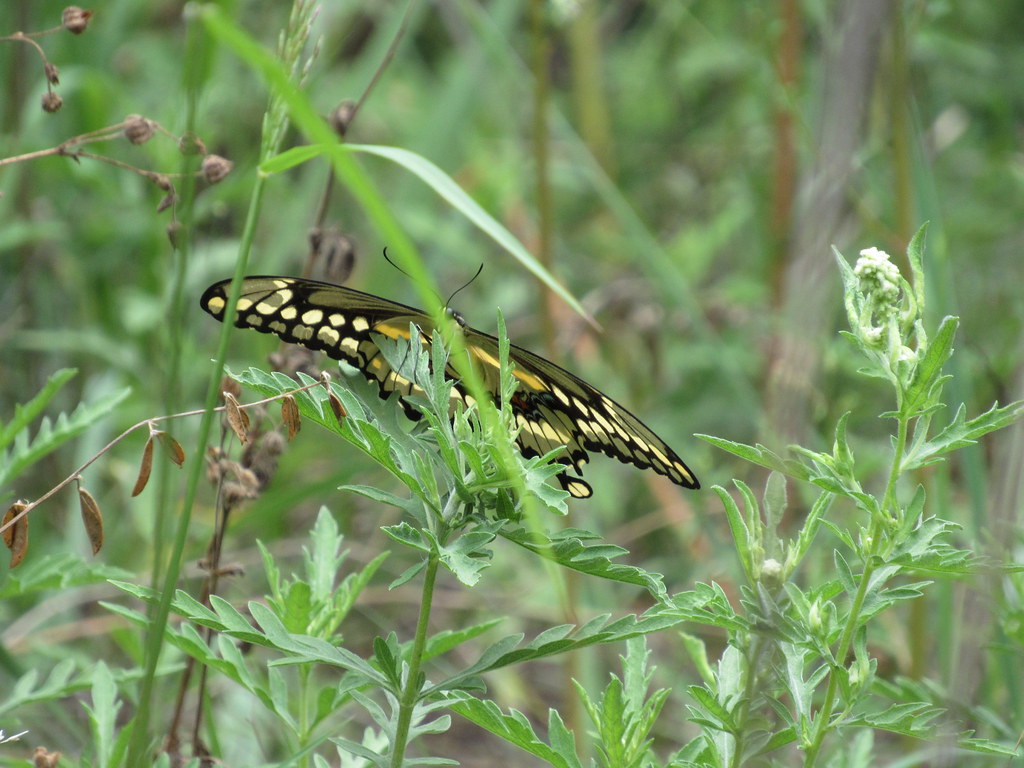 Eventually, the butterfly allowed us a good look: 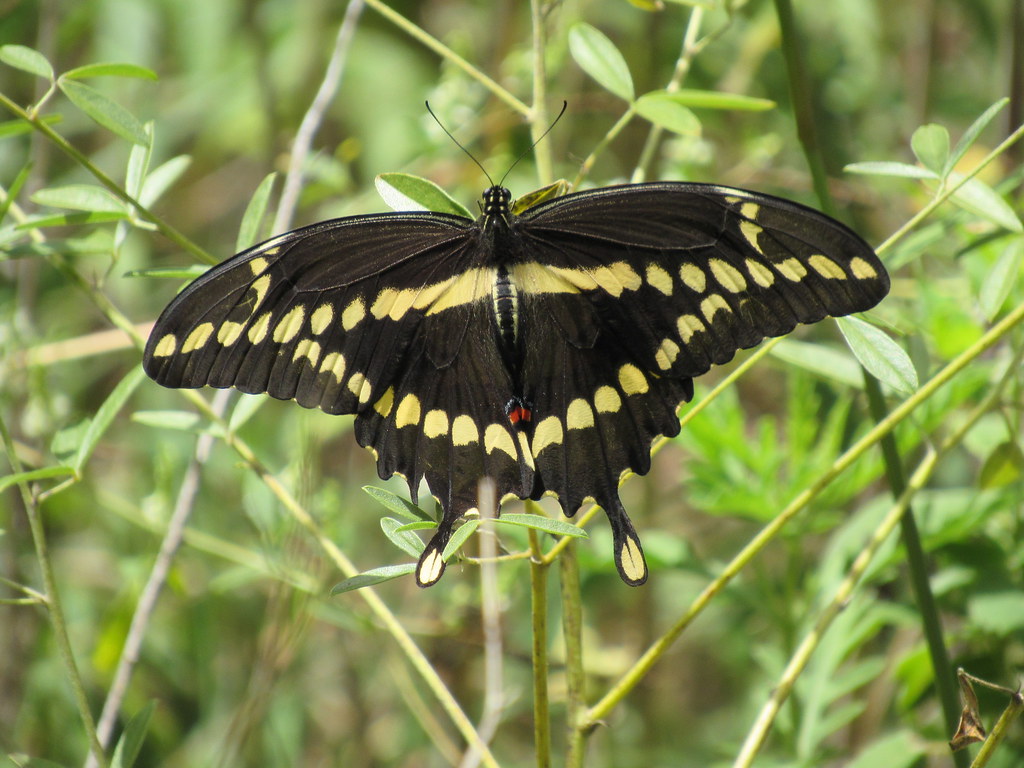 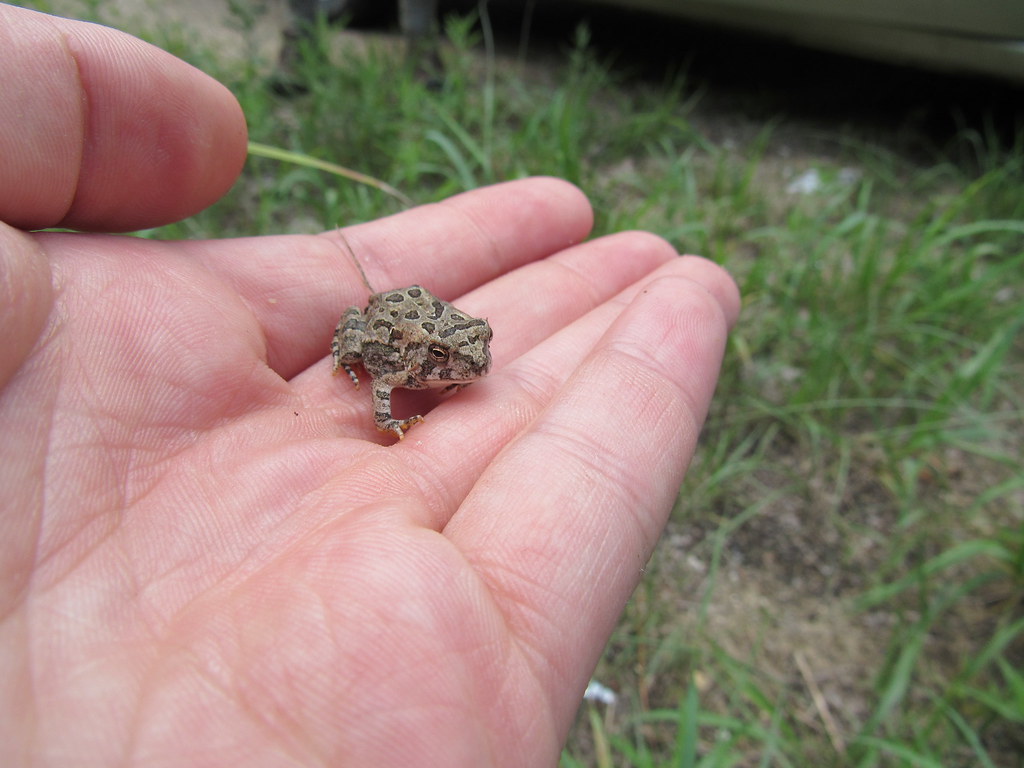 My next major adventure, the longest, was a trip to Calhoun County that took several jarring shifts throughout the day.  I was after a Laughing Gull and the confluence of the Mississippi River.  I saw neither.  I took a brief stop in Jacksonville for sandpipers at Mauvais Terre Lake, though, and found a Green Heron (Butorides virescens) when I scared it away only five feet from me! 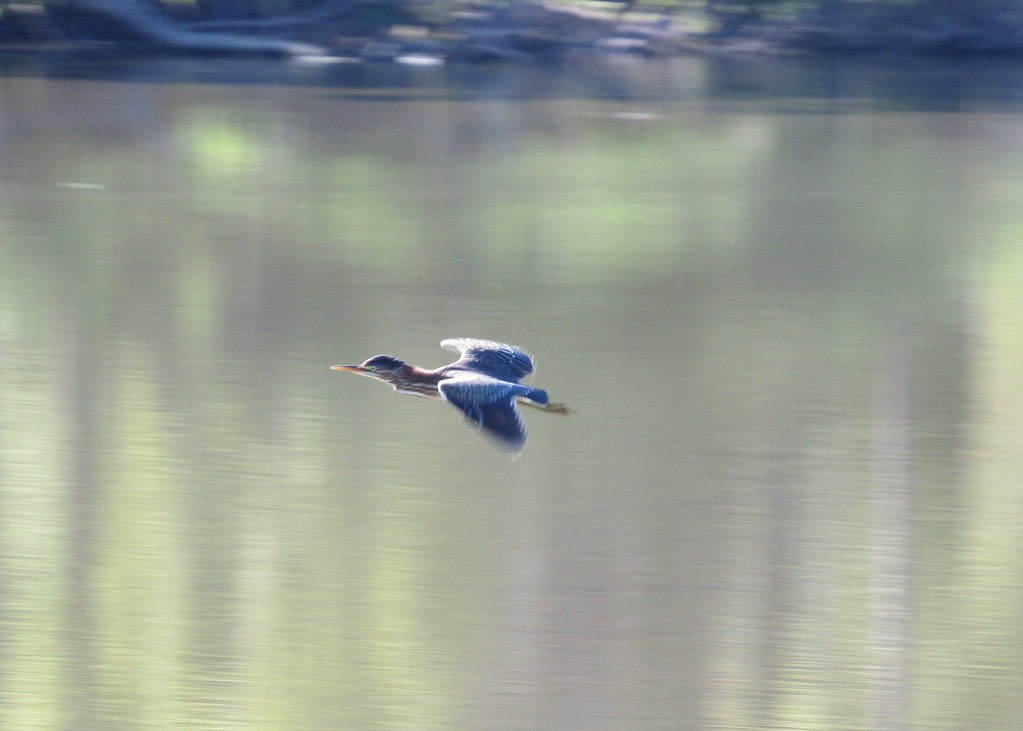 I did find a few sandpipers including this Lesser Yellowlegs (Tringa flavipes), and then a Red-shouldered Hawk, the first one recorded here according to Ebird, an online birdwatching database, flew overhead and scared them off to the far side of the lake. 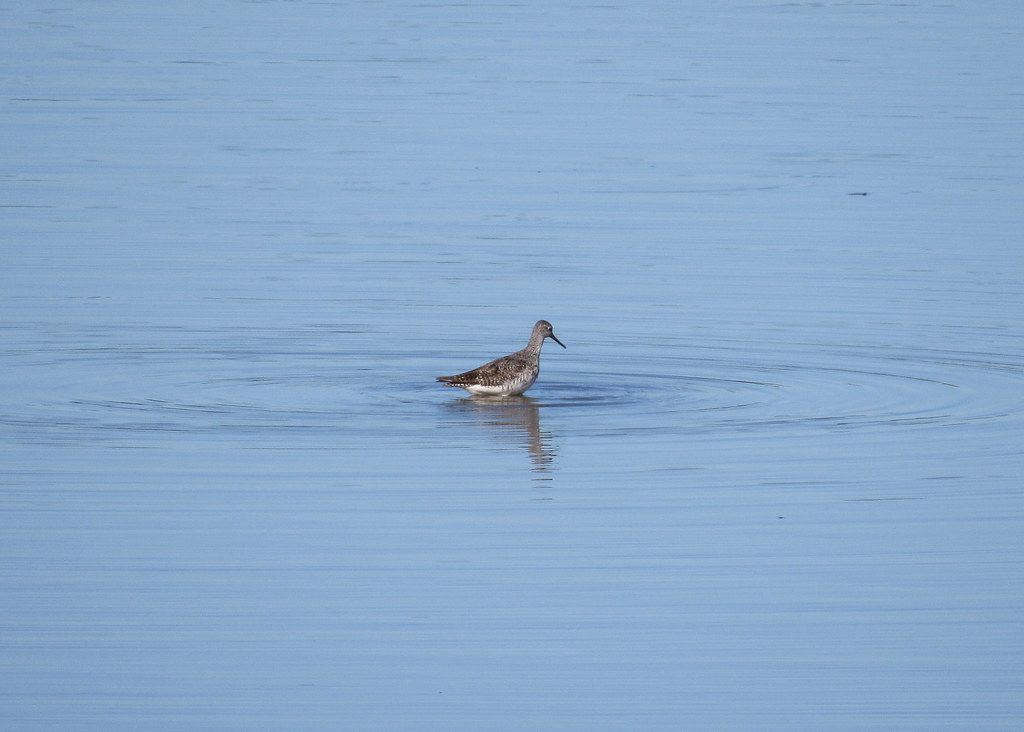 The shorebirds having flown far away from me, and nothing super-fascinating to be seen, I went over to Pike County and down to Calhoun County.  This area, southern Forgottonia, is very remote- these two counties are served by only one Walmart, and there is no cell phone reception for Verizon customers.  Despite being even more remote in spots, most of the Shawnee National Forest DOES have cell phone reception for me.  I don’t understand this. 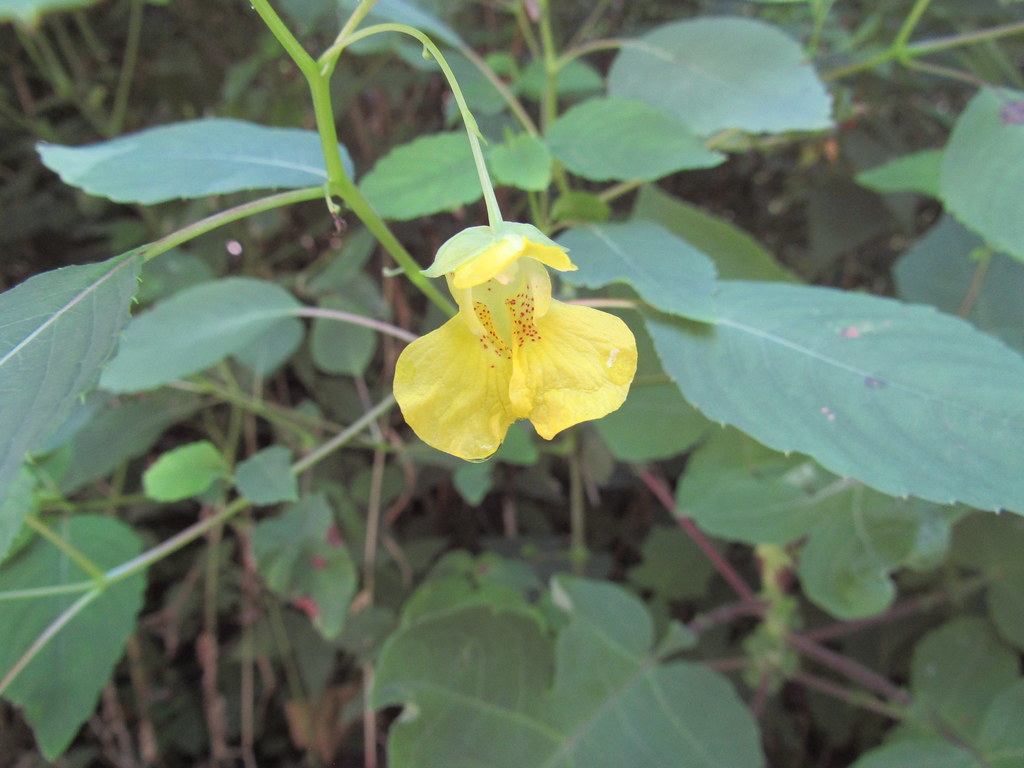 I stopped in the little, well-designed archeological museum at Kampsville and was told of a place called the McCully Heritage Project, which basically feels like a little bit of Southern Illinois transplanted about three hours north. I had a Yellow-throated Vireo twenty feet above me within five minutes of stopping, though the lighting was too bad for a photo.  So, I photographed a Yellow Jewelweed (Impatiens pallida) instead. 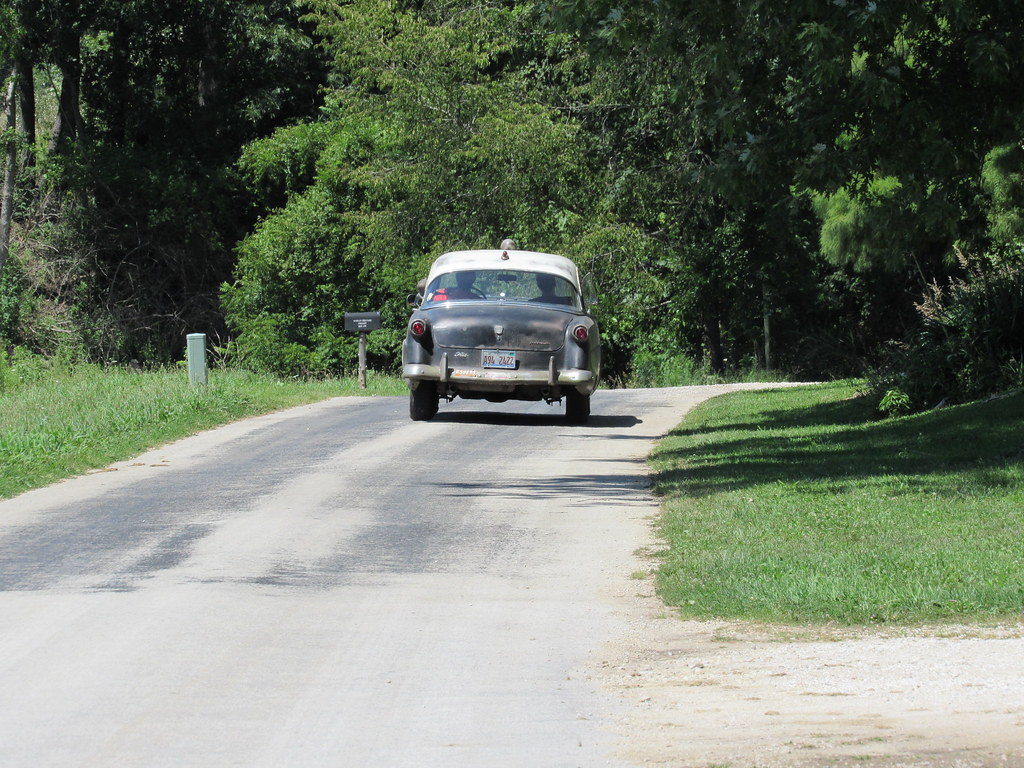 I also saw a vintage police car on the road.  I have a rule- drive two hours in the country, you will see something weird.  Sometimes the weird is a bird.  Sometimes it’s not. 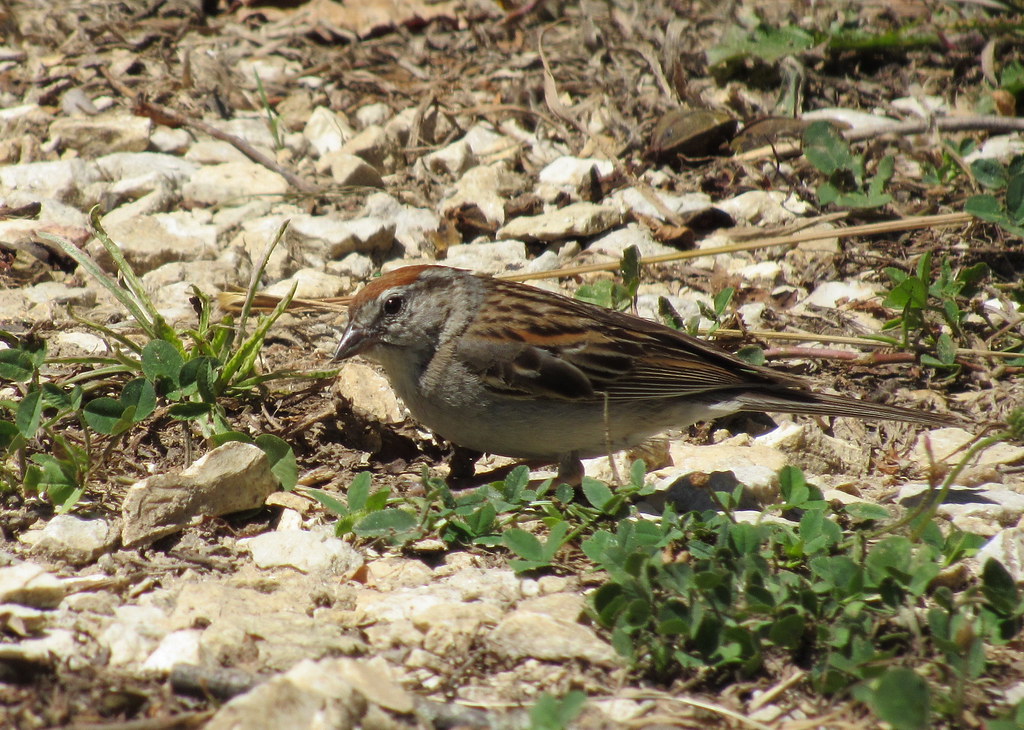 I then walked over a wetland boardwalk, which had a few Chipping Sparrows (Spizella passerina) on the other side.  They may be common, but I still quite like them. 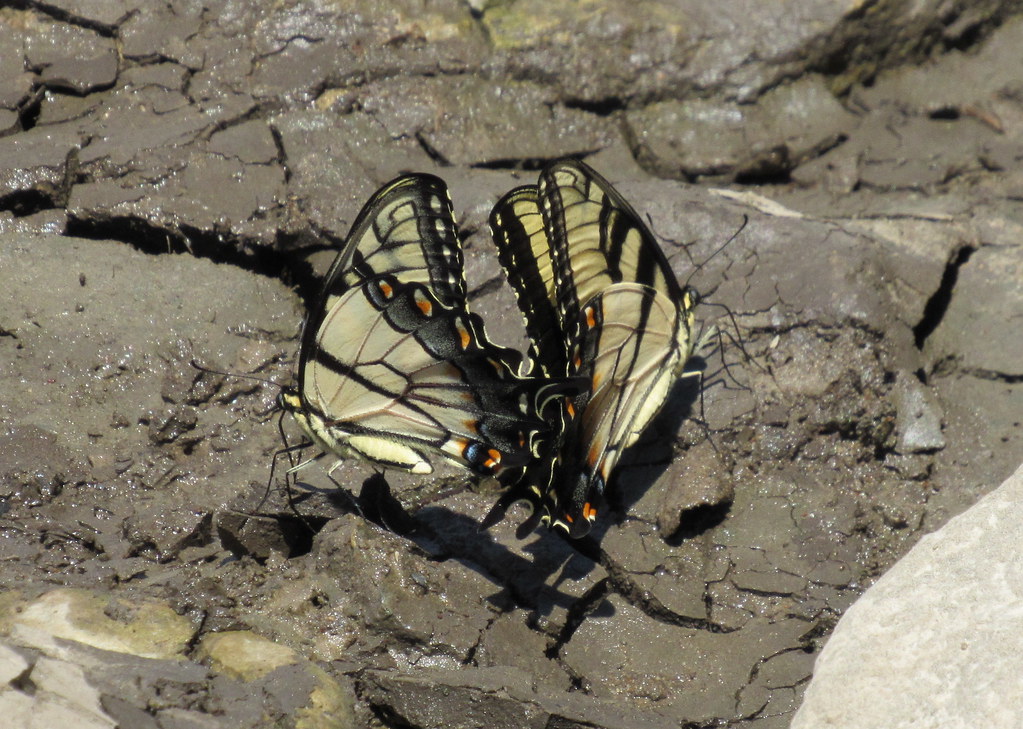 Puddling Tiger Swallowtails (Papilio glaucus) were found later down the road, along the banks of the Mississippi River.  There were far more butterflies in this area than I was used to, and I quite enjoyed that.  These butterflies are sucking moisture and minerals out of the mud. 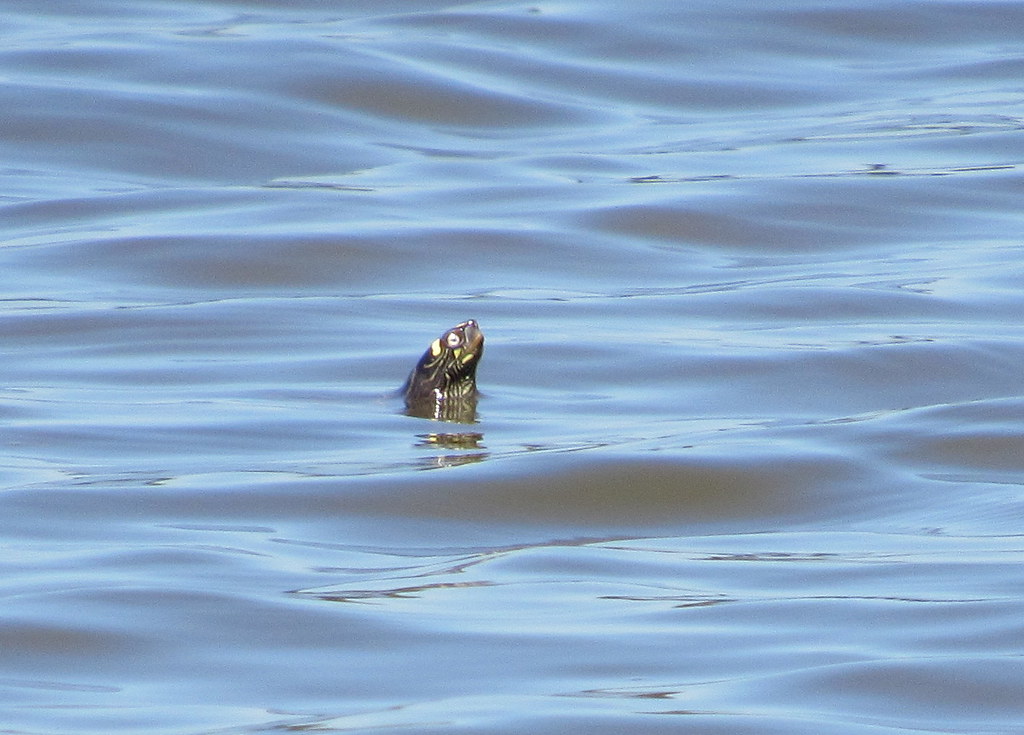 Another fun find in the area was a lifer Ouachita Map Turtle (Graptemys ouachitensis), in the Mississippi River.  These shy turtles are not easy to find in most of Illinois. 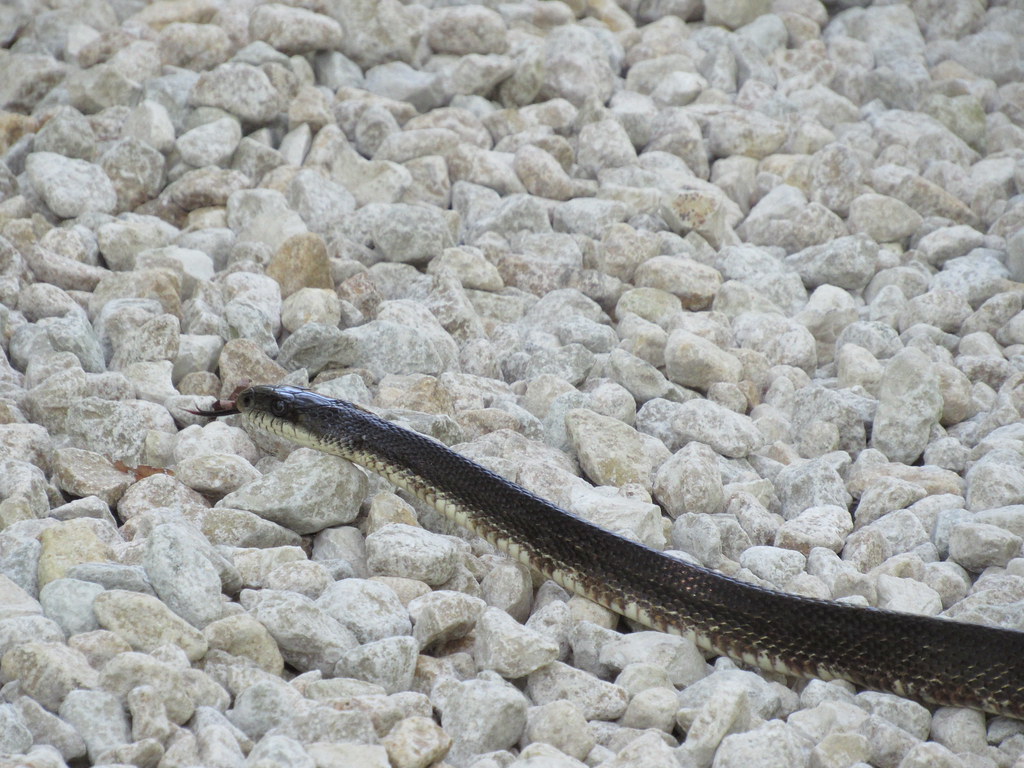 On the drive back upland, I ran right over a long black thing in the road, and realized as I went over it- “Oh no! That’s a Black Rat Snake!” Thankfully it was unharmed- it must have gone just between my tires.  It’s been years since I’ve seen one of these, and this was the longest one (about four feet) that I’ve ever seen!   This snake has no scientific name, because it has about six different scientific names.  I think Pantherophis spiloides is the current one, but it really varies. 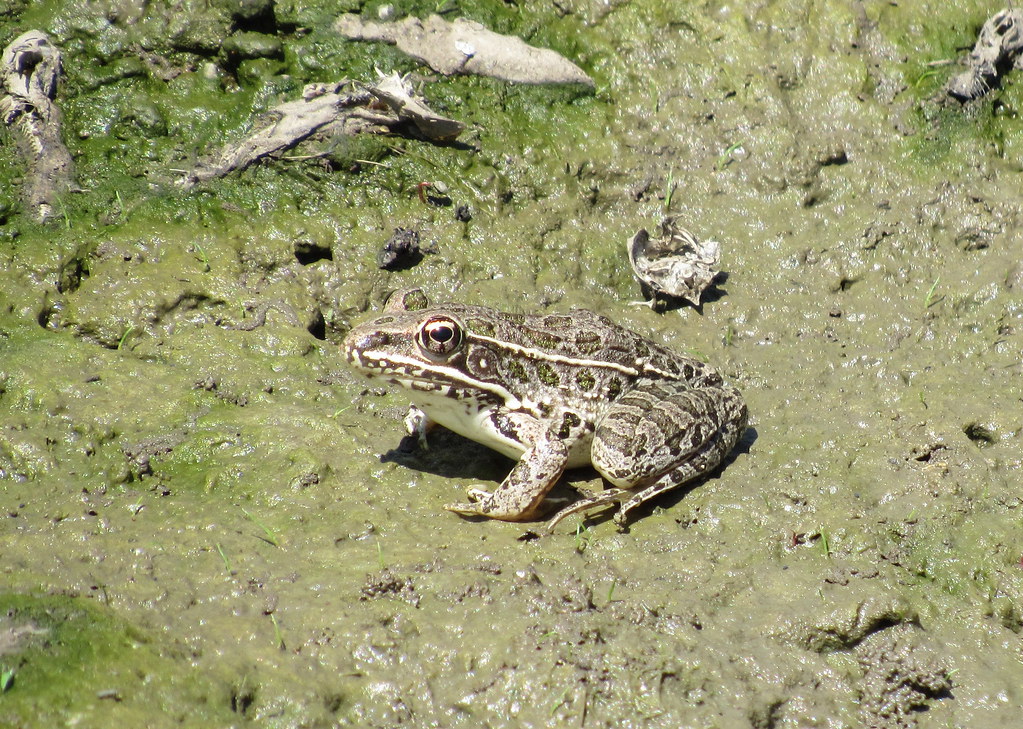 Abundant Southern and Plains Leopard frogs in the lowlands (in the hundreds) were quite welcome. I drove down through peach orchards, backwoods, and over stunning bluffs.  Calhoun County’s just a fun place to drive for the heck of it, and the occasional nature preserve, historic site, or fruit stand makes for a good place to stop.  I eventually got to the spot I wanted to get to,  Swan Lake at Two Rivers National Wildlife Refuge, only to learn that it had been mostly emptied of water.  So, I went out on the mudflats. 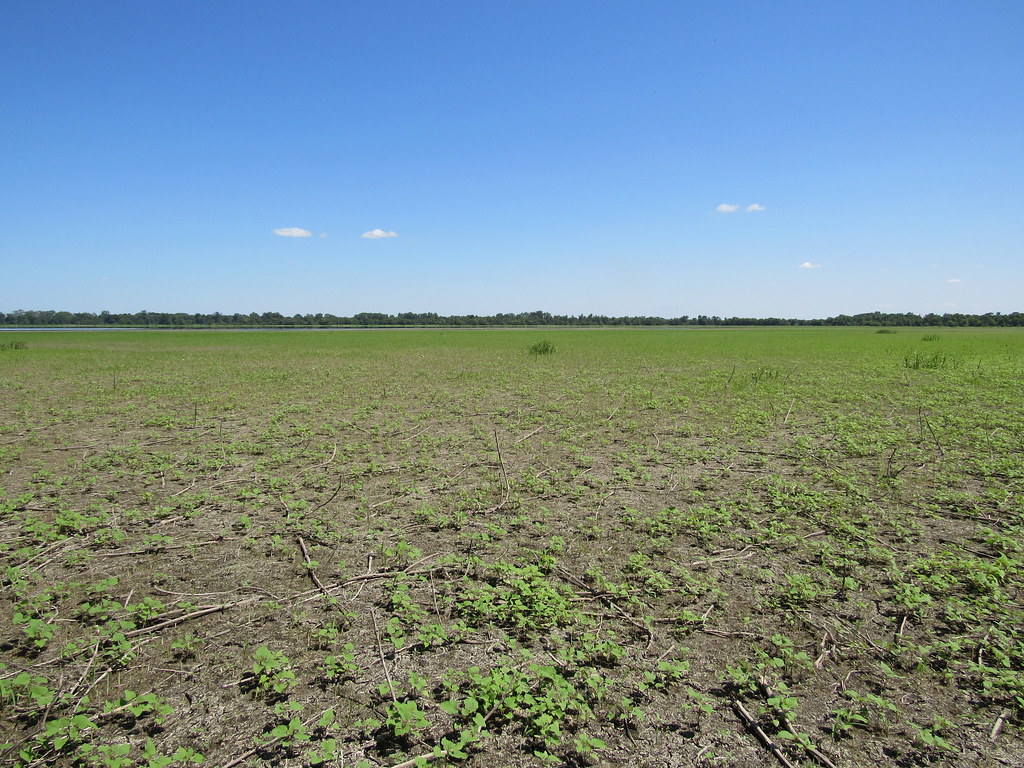 I wandered out to a willow bar, which would have been an island when the lake was at “normal” levels.   I could see birds over another levee, so I decided to walk from the willow bar  to the levee.  About a third of the way there, I went down a foot into the mud, leading to considerable problems.  To begin with, I was carrying my spotting scope, tripod, camera, and camera case over my shoulders.  Furthermore, I was alone, with no cell phone reception.  I pulled one foot out of the ooze, and, swinging my body around, attempted to go back the way I had come.  However, upon taking a step in the muck, my feet pointing almost perfectly opposite, I realized I was stuck.  My feet could get no leverage- they were both stuck, but since I was basically doing the splits, I couldn’t use one as leverage to pull out the other.  It was about this time that the giant mosquitoes arrived.  Look up Shaggy-legged Gallinipper for reference, or look up Kankakee in the search bar on this blog.  Thankfully, there were only a few.

There was but one solution- abandon the boots.  I slipped out of the boots with a sigh.  Wearing only socks on my feet, I crawled across the mud on forearms and ankles, spreading out my weight to avoid sinking further.  Ten feet away, the ground dried out sufficiently to allow me to stand up and walk to a nearby willow bar, where I dumped my scope, camera, and tripods- all carefully bagged and protected from mud.  I then crawled back the same way.  Over the next fifteen minutes, I proceeded to dig my shoes out using only my hands and a small rock I’d found on the willow bar. Here’s the results: 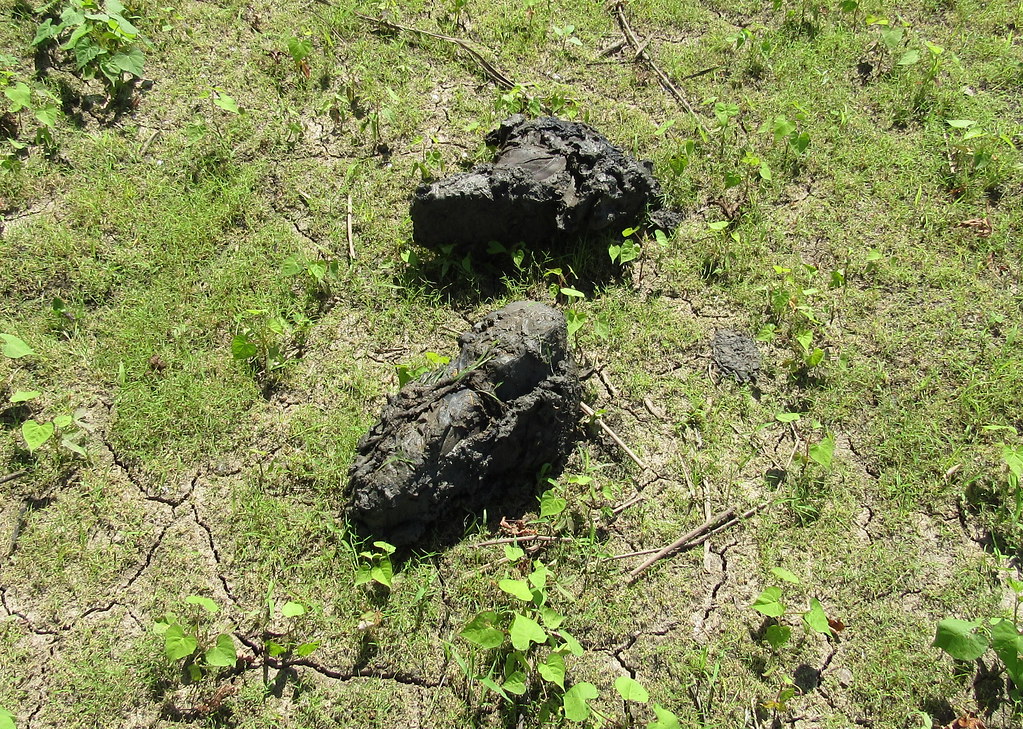 I then admired the hundreds of caterpillars among the vegetation: 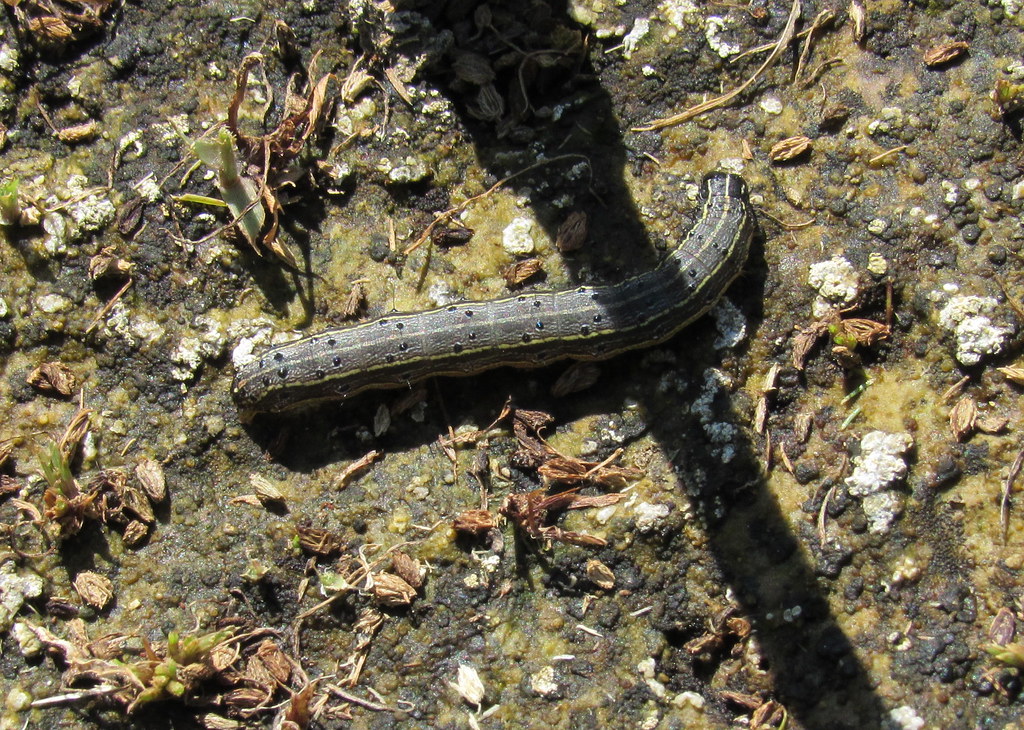 I got back to the main office, sockless, with ten minutes until closing.  After washing up, I decided to continue onwards and go for my next target, the confluence of the Mississippi and Missouri Rivers.  This resulted in my stopping at Riverlands Migratory Bird Sanctuary, and seeing Alton: 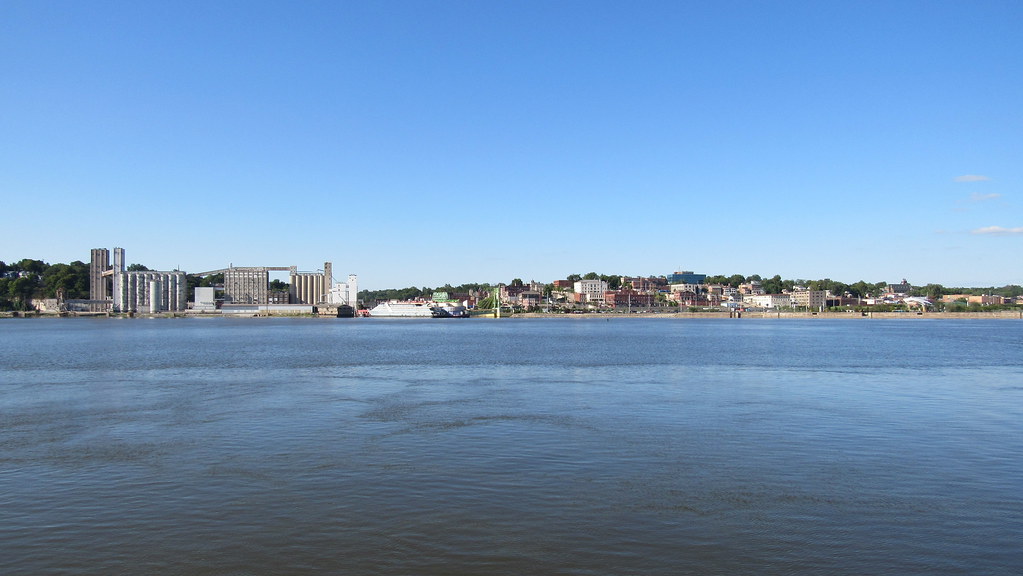 No, this isn’t a panoramic shot- it’s just cropped that way.  I drove down to the confluence, and it was closed due to temporary flooding.  Let me remind you- upriver the lake was mostly dry. Downriver, there’s flooding.  I contented myself with federally-threatened juvenile Least Terns (Sternula antillarum) at their breeding site behind a gas station at Riverlands, and headed home: 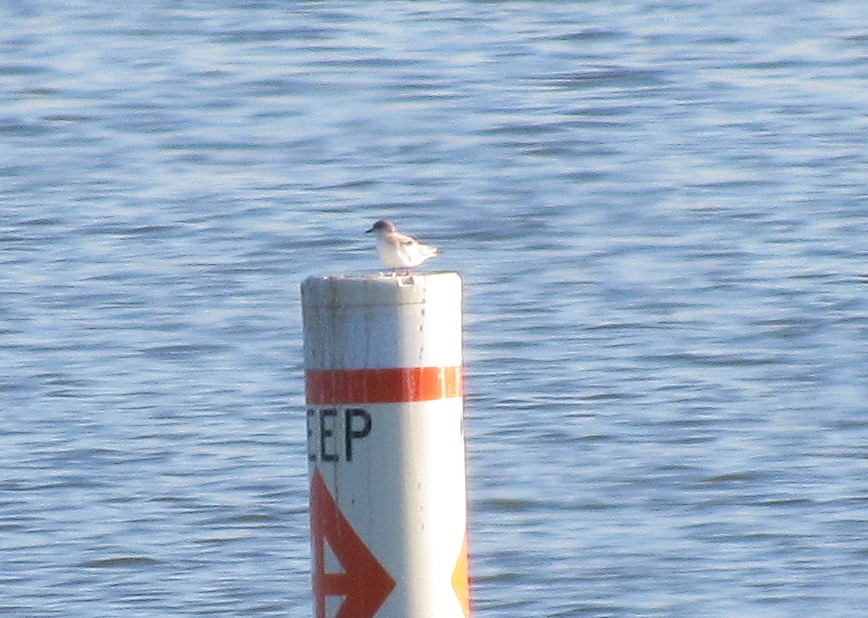 My last trip was to Meredosia National Wildlife Refuge, one of the best birding area in the Illinois River Valley, at least in my opinion, with a friend of mine.  After finding forty-two species on the refuge itself (a Great Horned Owl, several Willow Flycatchers, and 25+ Bobwhites being the best finds), we ventured south to a private duck club’s little lake.  Nothing much was there.  While on the way, my friend mentioned that a birder he knew had seen Western Kingbirds at the nearby Meredosia power plant.   I watched out the window for awhile, when suddenly, I couldn’t believe my eyes.  Scissor-tailed Flycatcher!  What the heck! 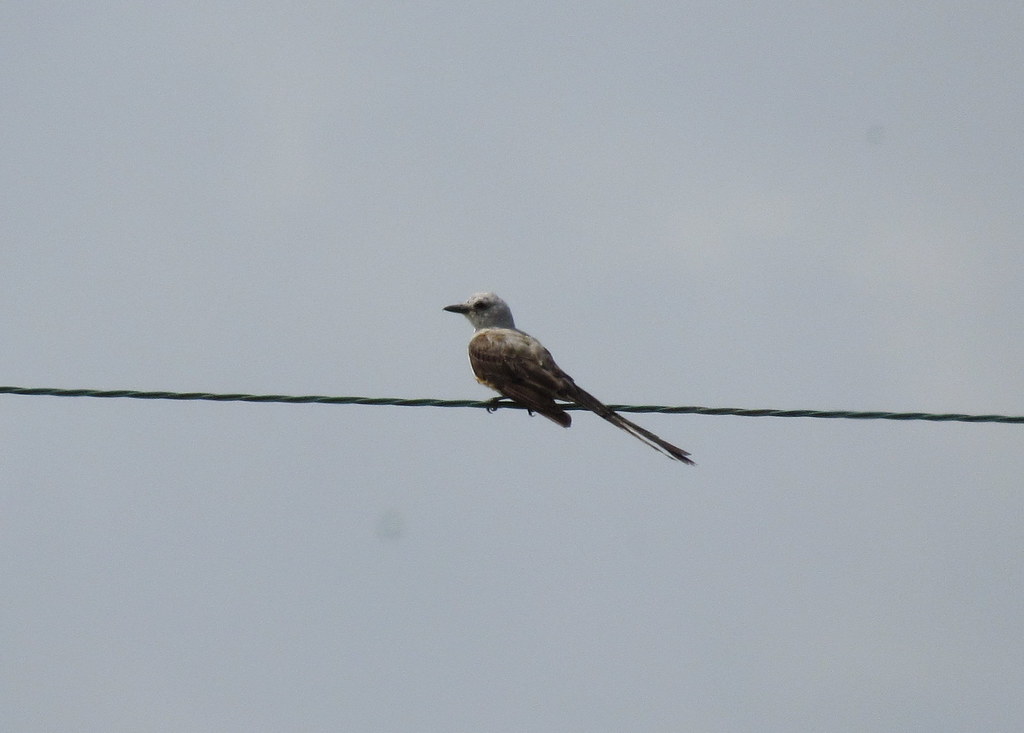 According to Ebird, this female Scissor-tailed Flycatcher (Tyrannus forficatus) is a county first record for Morgan County, though it was my third time seeing this species, and second time for Illinois.  We watched it for a bit, and then we drove down the road… past the power plant we had discussed earlier… and two Western Kingbirds (Tyrannus verticalis) were sitting on the fence.   A third one, a bit further down, proved to be a good photo opportunity: 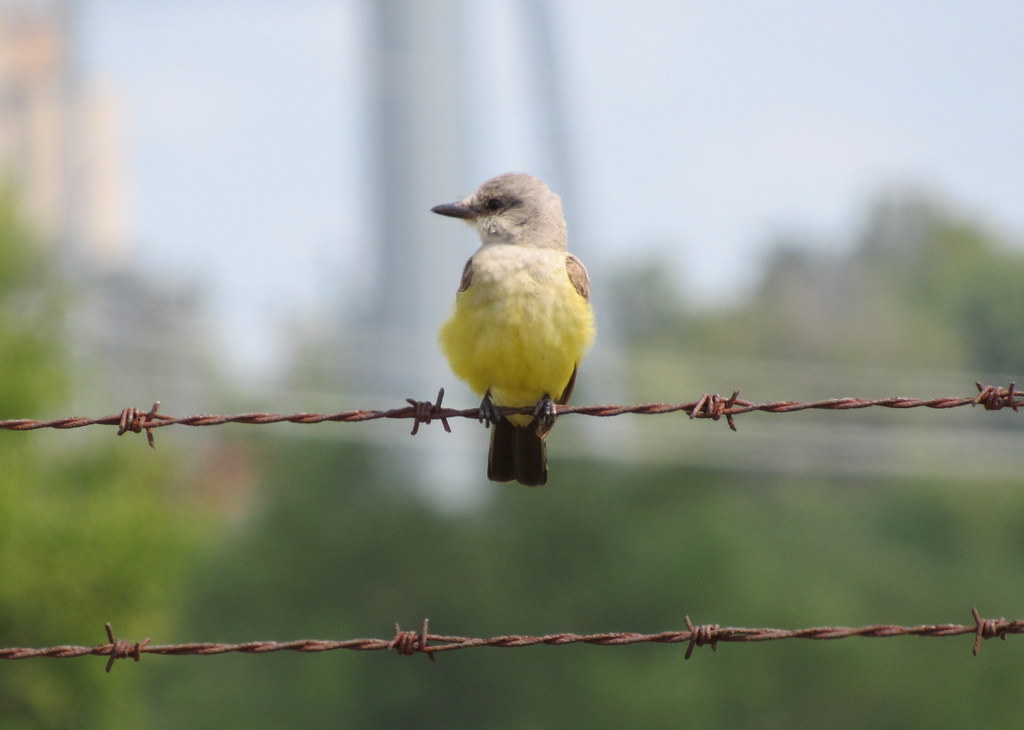 This one flew back to the other two, and proceeded to feed them, proving that it was the parent to the two younger birds, and that they had bred someplace on the power plan’s grounds. 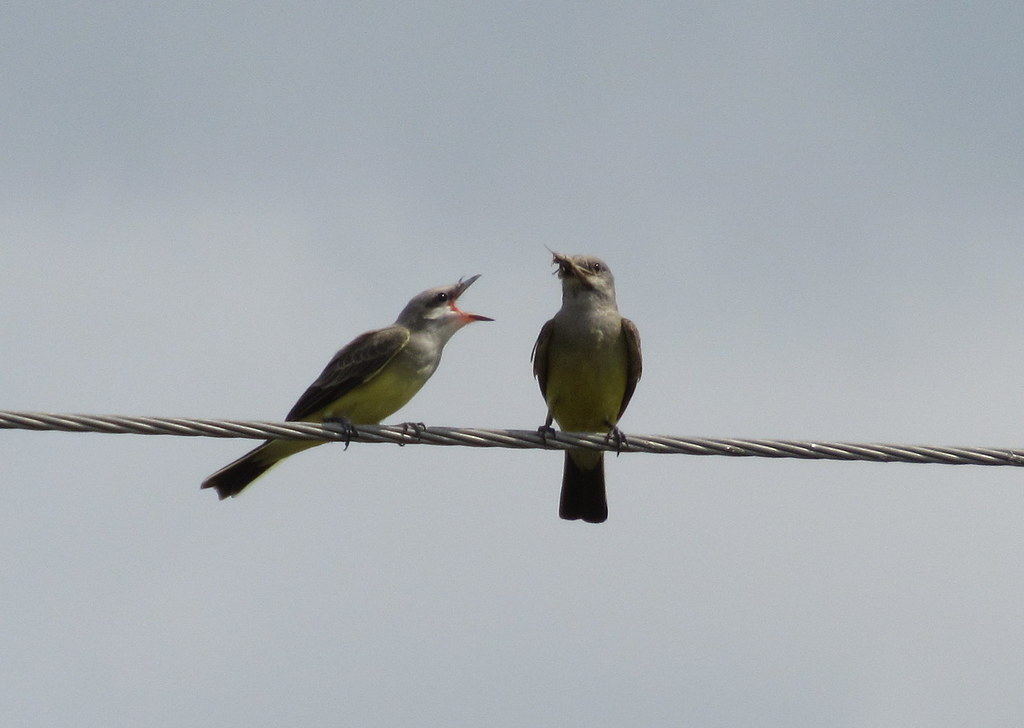 I thought this was the first breeding record for Morgan County, but there’s another one out on Ebird from two or three years ago.  Still, it’s new for 2017- these birds are rare here.  Since the 1900s, Western Kingbirds have been expanding eastwards, and they’ve nested regularly at a few different spots in Illinois.  More and more nests are being found in Illinois, especially near power plants and substations.  I think someday next June, if I have the time, I will search out all power stations and substations in the Illinois River sandlands between Morgan and Tazewell Counties to see how many Western Kingbirds I can find. 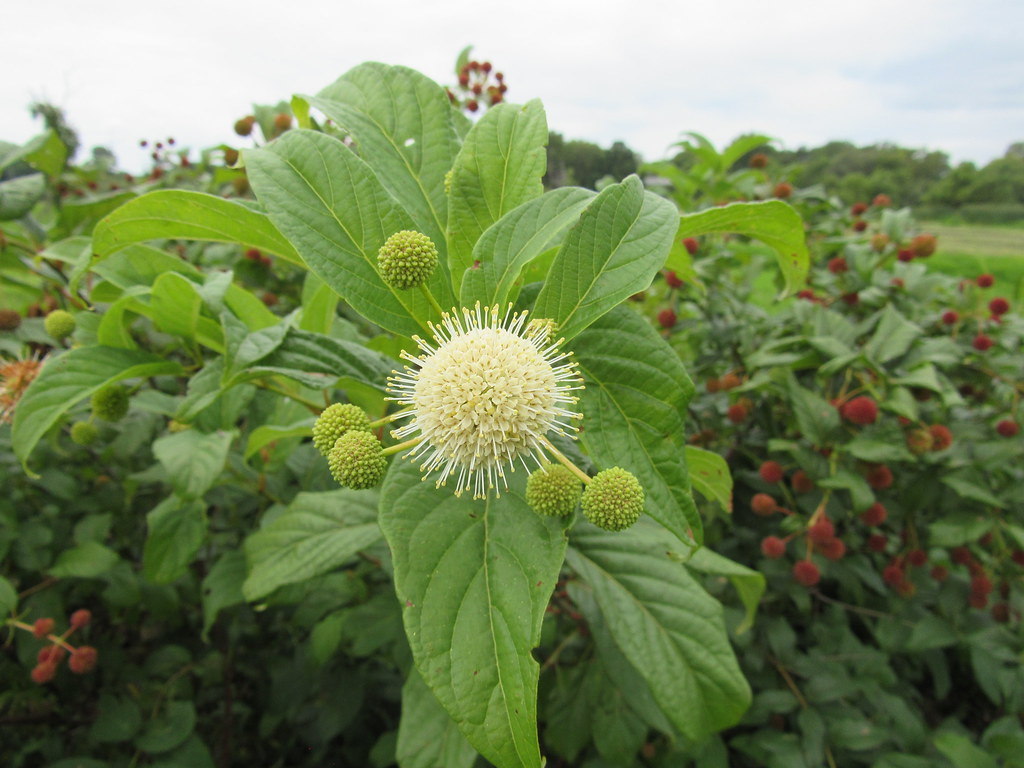 The day ended with me looking at Beardstown Marsh for Marsh Wrens, which did not appear or even sing.  I did photograph these Buttonbush (Cephalanthus occidentalis), a swamp-loving shrub. The next day was spent packing for the big move, and the following day we left.  Now I live in Southern Illinois, surrounded by nature preserves, state parks, and national forest, with everything from hill prairies to rocky canyons to Louisiana-style southern swamps, even roads closed twice a year for snake migration. I really love it here.  This is a big moment for me and this blog- there will be a lot of new stuff I haven’t seen before.