I feel uninspired to write about my adventures of late.  I’d rather write about other people’s.  So I am.

Alaska- The Big One- Gray Nightjar

California- California has had so many uncommon and bizarre birds that picking just one is extremely difficult.  There’s over a dozen species that California and only California has had among all 50 US states.  Going by global rarity and size of population, I incline to say that the Chatham Albatross is the rarest bird recorded in California, because there are only about 11,000 of them in the world and none had been recorded in the Northern Hemisphere before.

Colorado- Variable Hawk (not accepted but it might be today)

Kentucky- Red-necked Stint- this is entirely personal bias because this is also the only bird on this list I’ve personally seen.

Pennsylvania- Black-backed Oriole (since it was accepted by the ABA, I have to accept it…)

How have those two puns slipped past my notice for this long?  I mean, it’s probably good that they have, but still, you would’ve thought I’d have caught something like that by now.

After the adventures of the last week,  I figure it’s worth refreshing people’s minds on Central Illinois’ premier natural areas, which I broadly refer to as “Glorious Mason County” even though it’s a bit broader than just that area  It could also be called the “Havana area” as that’s the name of the largest town in the region. 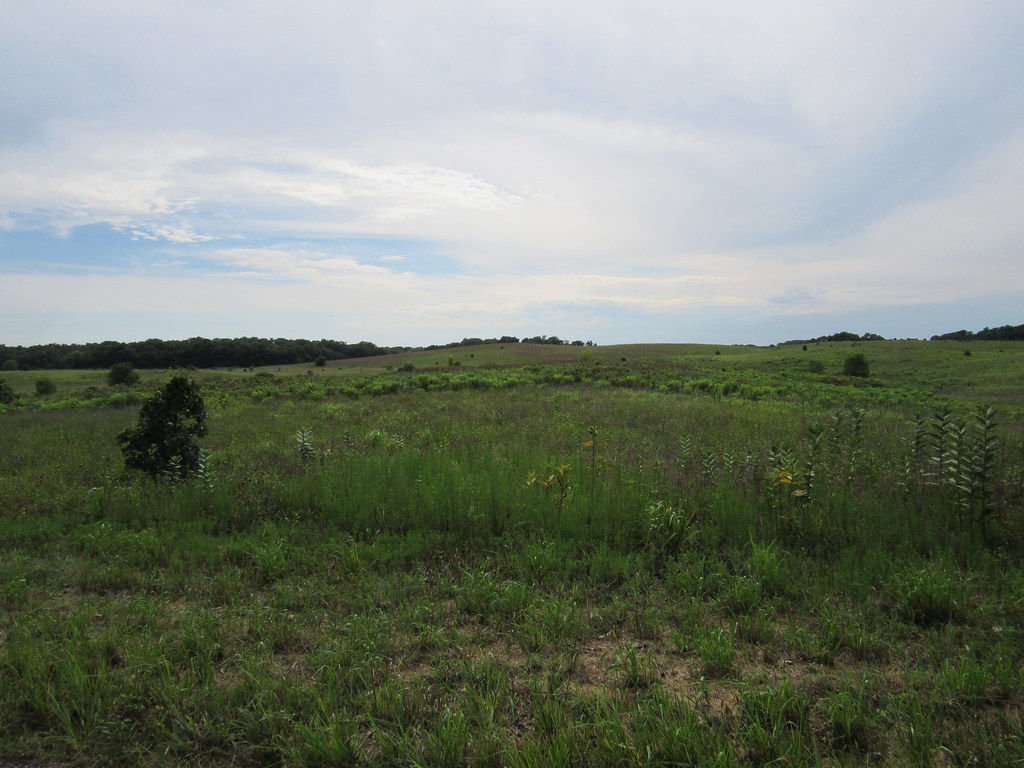 I could go into a very deep discussion about the complex geology of this area, and because I wouldn’t understand any of it, I won’t.  However, I’ll try to pass on the limited, simplified view that I do understand, and illustrate this with a map: 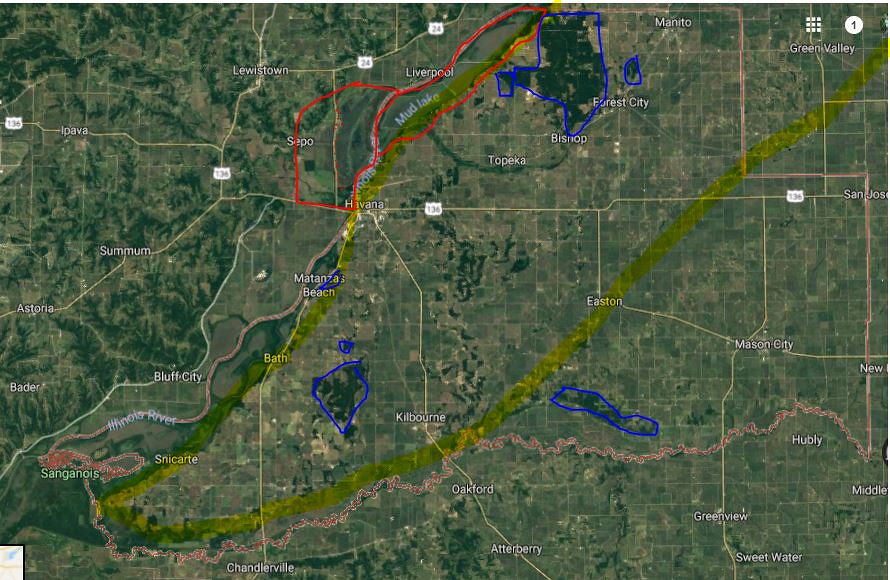 Basically, most of the area is covered in sand dumped there by glacial runoff- the Kankakee Torrent flooding that drained Lake Michigan down to its current water level and carved the canyons in Starved Rock State Park. The primary area of sand is surrounded by a yellow highlight on the map.  To the west, the Illinois River  runs in a valley carved by the former path of the Mississippi River in pre-glacial times. 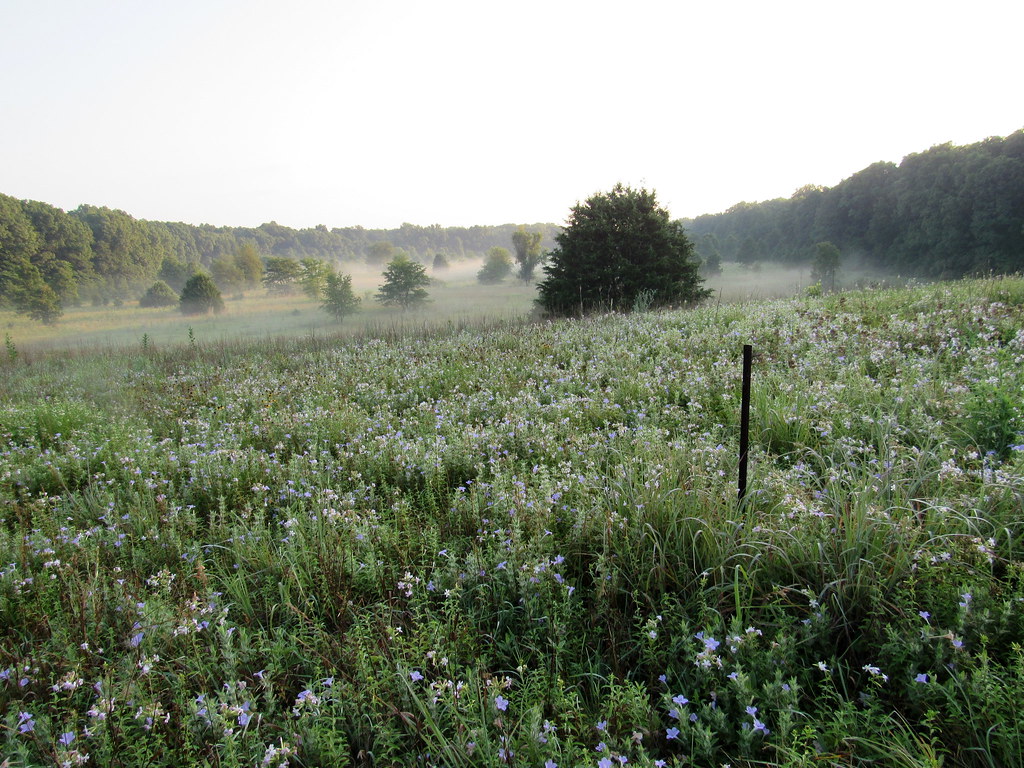 The sand deposits encouraged the growth of more Western plant and animal populations.  Bullsnakes, Pocket Gophers, Silvery Bladderpod, Prickly Pear cactus, Western Kingbirds, and Lark Sparrows  comprise some of the many “Western” animals and plants found here.  More “Southern” plants and animals, like Pawpaw, Ozark Milkvetch, Prothonotary Warblers  and Northern Mockingbirds also dwell in Mason county and the surrounding regions.  Just across the river, Black-bellied Whistling Ducks, usually restricted to the Gulf Coast, have been discovered breeding in Fulton county as of 2017 and 2018.

Indeed, the wetlands along the Illinois River attract millions of migrating ducks and geese every year, as well as rarer species like King and Black Rails, Least Bitterns and Black-necked Stilts.  Strange vagrant birds like Sabine’s Gull, Anhinga, and Ruff have appeared in this area on multiple occasions.The two red areas are the largest wetlands in the region- Chatauqua and Emiquon.  Emiquon is on the left, Chautaqua on the right. 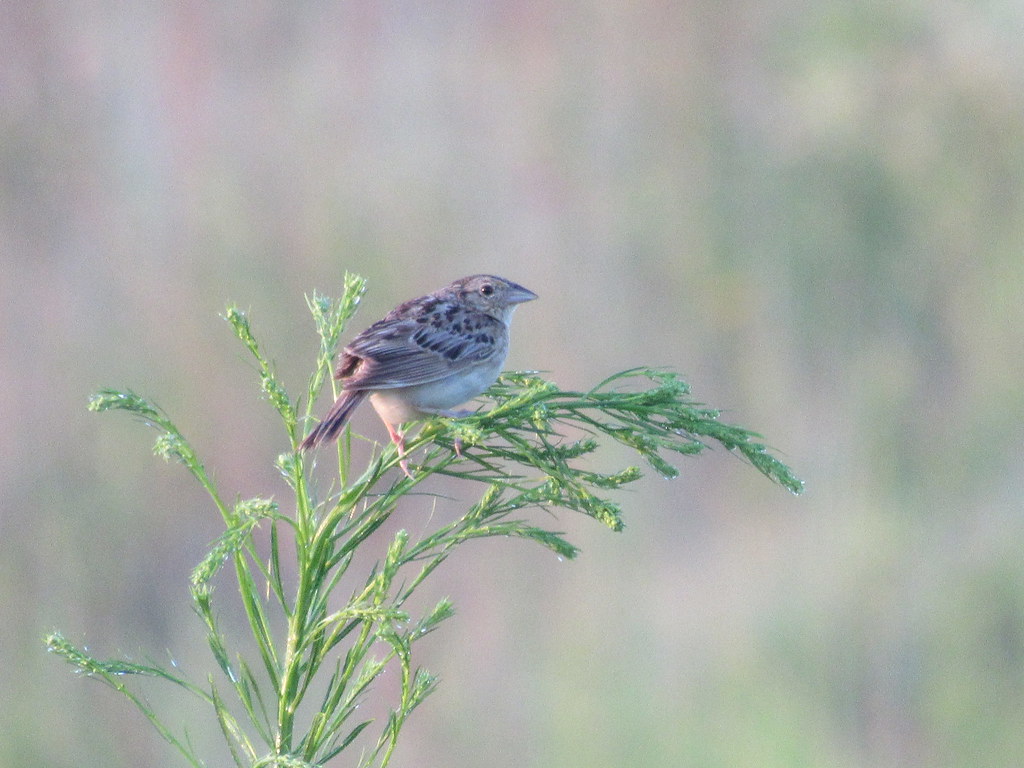 More  common birds like Eastern Meadowlark, Indigo Bunting or the  Grasshopper Sparrow (Ammodramus savannarum)  above have hung on here in numbers exceeding those of surrounding areas.   In recent years (early 1900s) someone looked at the sand dunes and thought “You know what this needs?  A large pine plantation!”  Sand Ridge State Forest (the large area circled in blue, top center of the map), and a few other localized areas, are the result.  Another fun introduction about the same time was the Eurasian Tree Sparrow, a small bird imported from Europe and released in St. Louis.  It’s since made its way upriver slowly into this region. 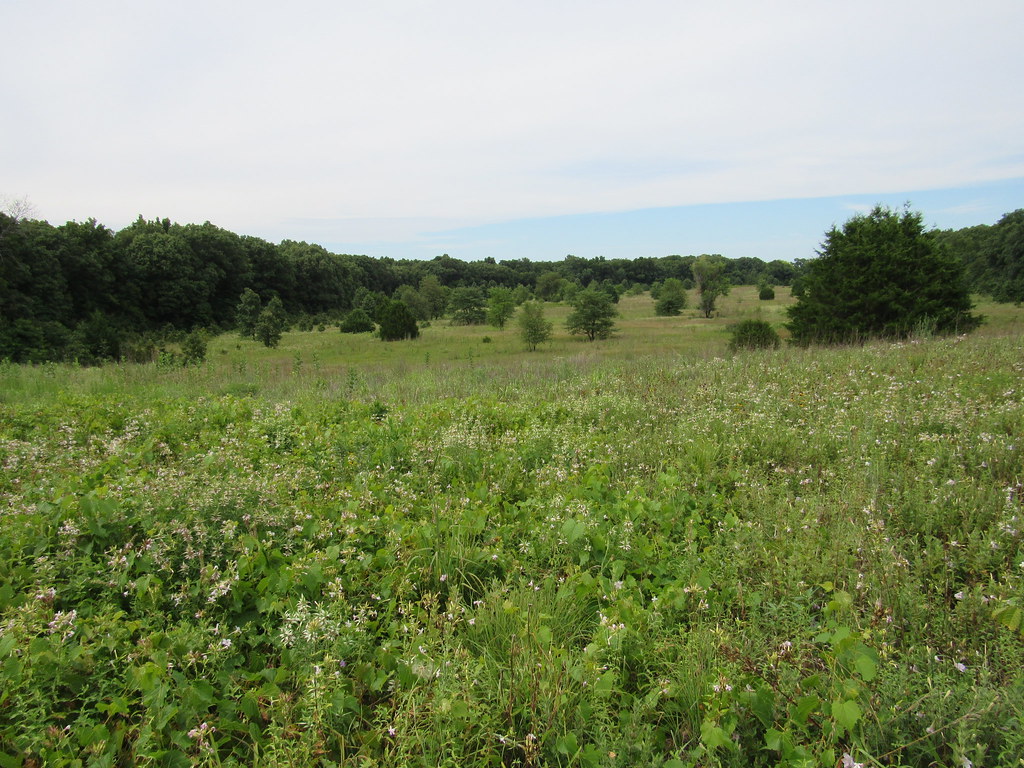 I think that’s enough for background.  Of late I’ve been spending time in southern Mason county, which hasn’t  been explored enough compared to the Sand Ridge – Chautauqua – Emiquon area to the north.  However, it has its rewards.  For instance, abundant Grasshopper Sparrows: 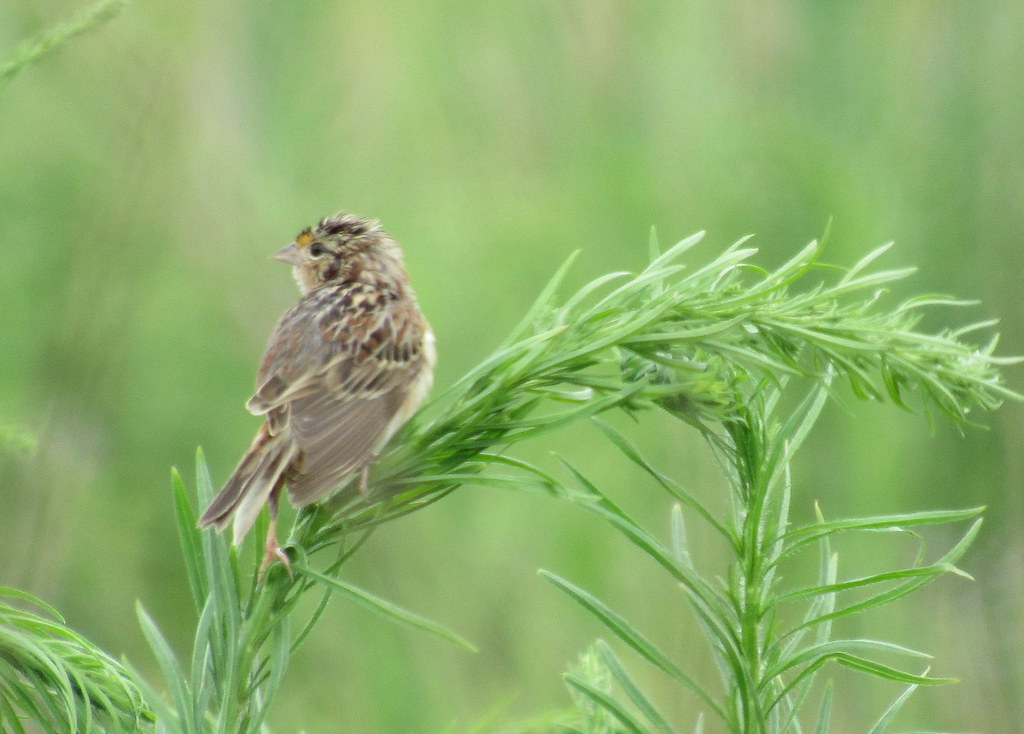 Grasshopper Sparrows are vanishing across most of Illinois.  Sure, they’re a little brown bird of limited interest to someone not interested in birds, but if they disappear something will be lost from the world- a bird that both sounds like and eats grasshoppers.  Thankfully there’s still a healthy population of Grasshopper Sparrows in most of Mason county. 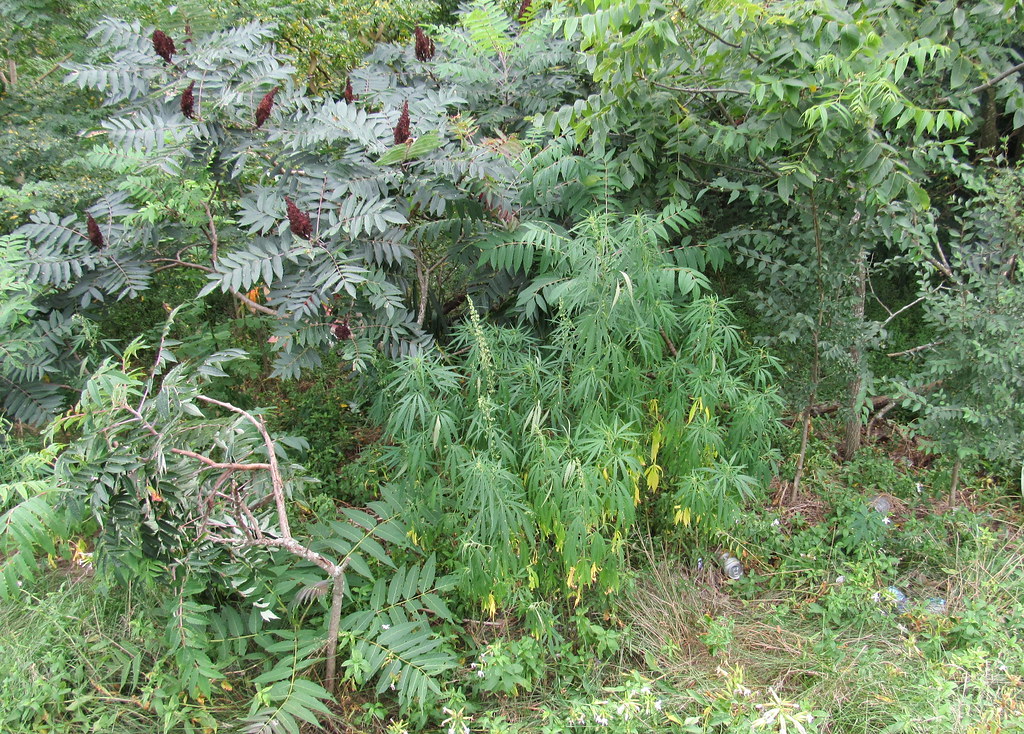 Another advantage of wandering around the backroads of southern Mason county is the occasional population of Cannabis sativa.  Mind you, this isn’t the kind generally smoked (though it is a controlled substance).  This is more or less hemp.  (I also don’t smoke anything- I generally think human lung tissue is not designed to take in smoke of any kind.)  Wild Cannabis is an actual weed in moist areas throughout this part of the state, though fairly uncommon. 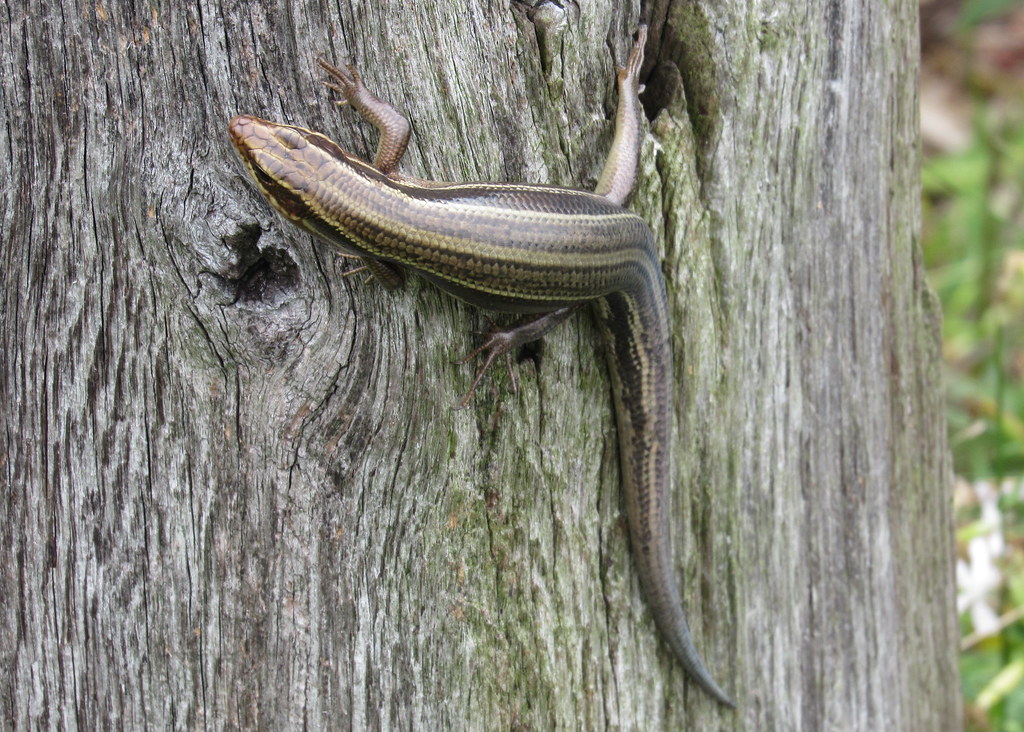 Also uncommon is the Five-lined Skink (Plestiodon fasciatus), especially one of this considerable size (approximately eight inches long).  This female was sitting on a mattress dumped at the marijuana spot photographed above.  It then ran up a post to be photographed.  Five-lined Skinks have an unusual range- they are close to their northern edge in Illinois at this spot, but they also occur in eastern Wisconsin.  It was my first time seeing one this far north, at any rate. 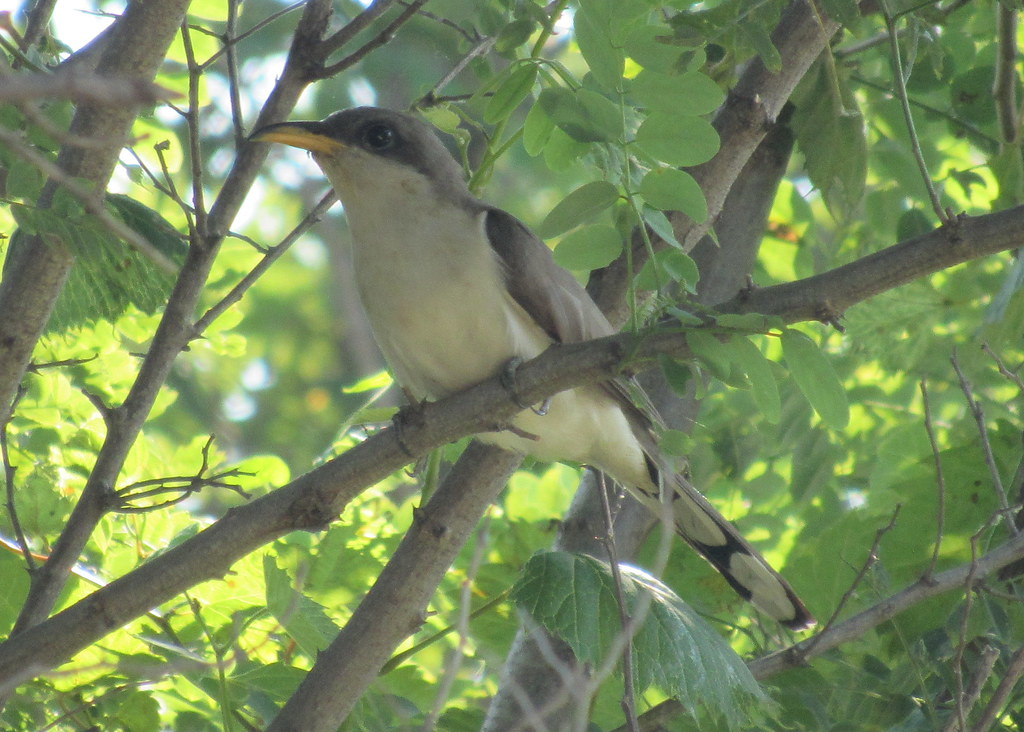 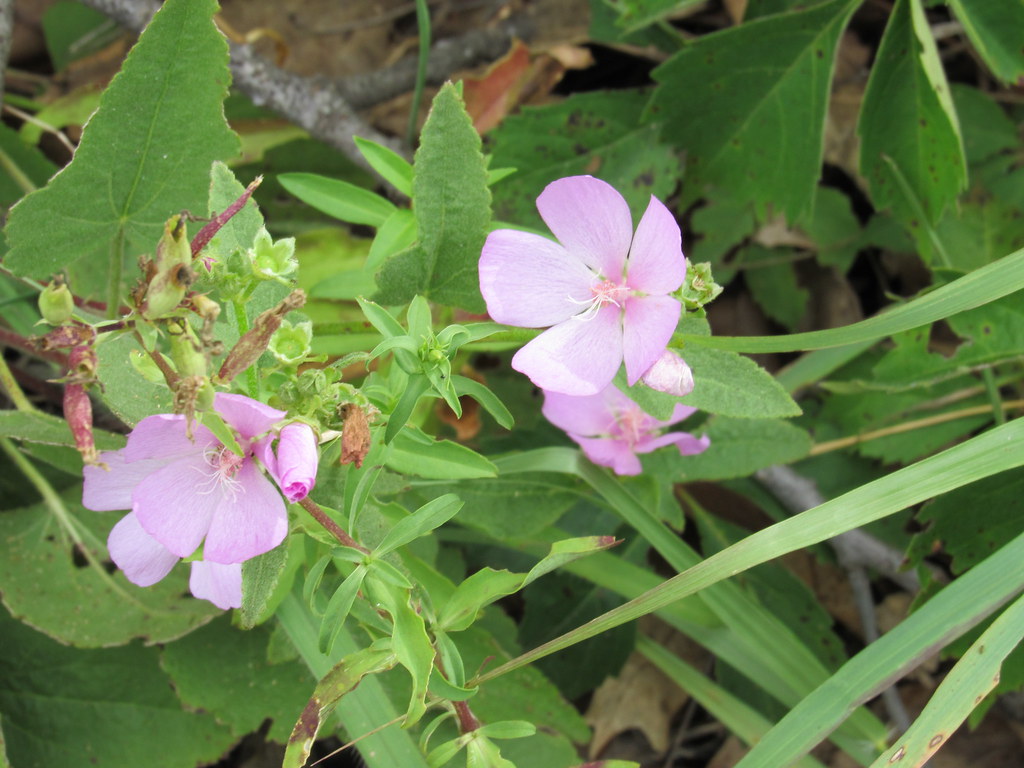 Growing on the side of the road was Clustered Poppy Mallow (Callirhoe triangulata), a fairly uncommon plant of dry soil and sand prairie.  I’d never found it in the wild before!  We pressed on to Revis Hill Prairie, spotting Northern Mockingbirds, Henslow’s Sparrows, and Acadian Flycatchers on the way, as well as NINE American Kestrels in one field. 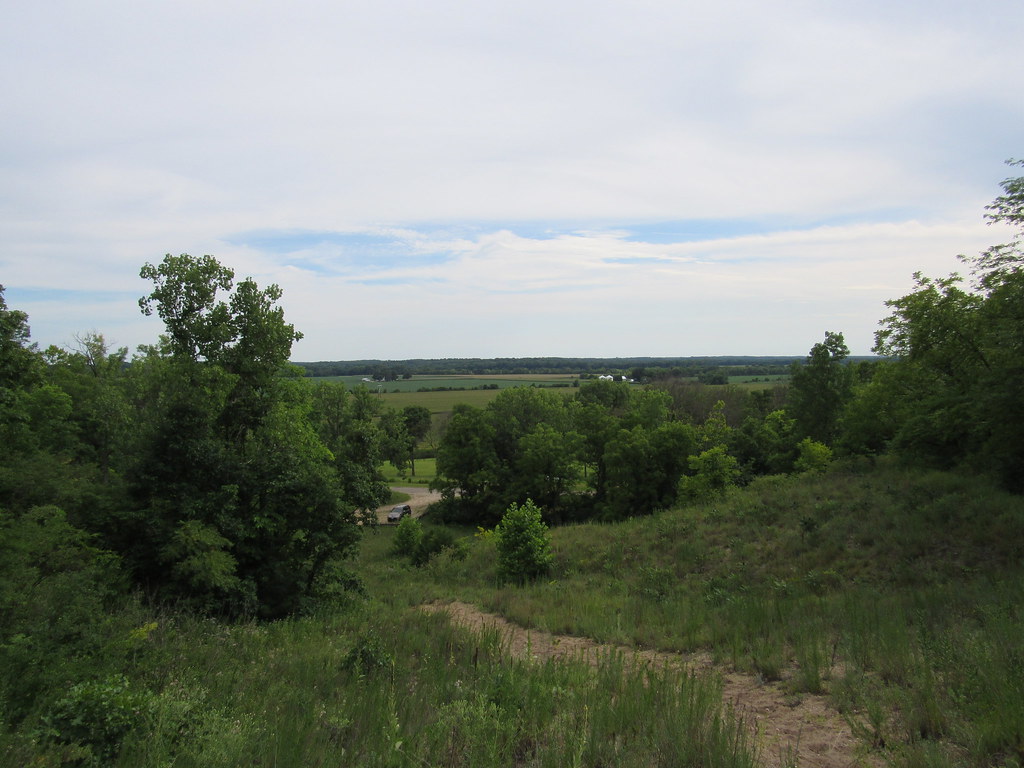 Revis Hill Prairie Nature Preserve is the area on the map circled in blue EAST of Kilbourne.  This contains the region’s highest hills, rising about 250 feet above the Sangamon River Valley.  I’ve not been able to find a clear explanation as to why there are hills here, but there are.  On top of these hills are multiple old hill prairies which have grown here since presettlement times.  Less common birds like Yellow-breasted Chat, White-eyed Vireo and Baltimore Oriole are abundant here.  However, Revis is very little-known for birds- most people come here for insects.  There’s a species of walkingstick and a species of leafhopper only known from here in Illinois. 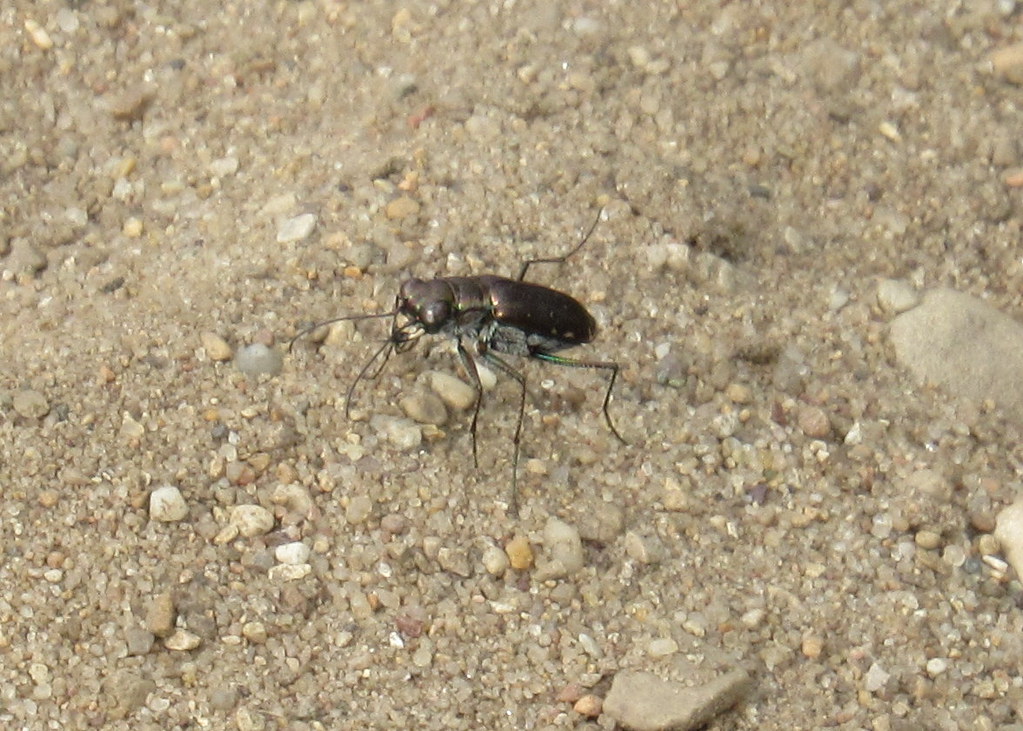 A number of burrowing wasps and tiger beetles (Cicindelidia spp.) take up residence in the sand and/or loess prarire sections of the preserve.  I don’t think I’ve ever stopped here and not found a new species of insect to me (except in the winter, of course). 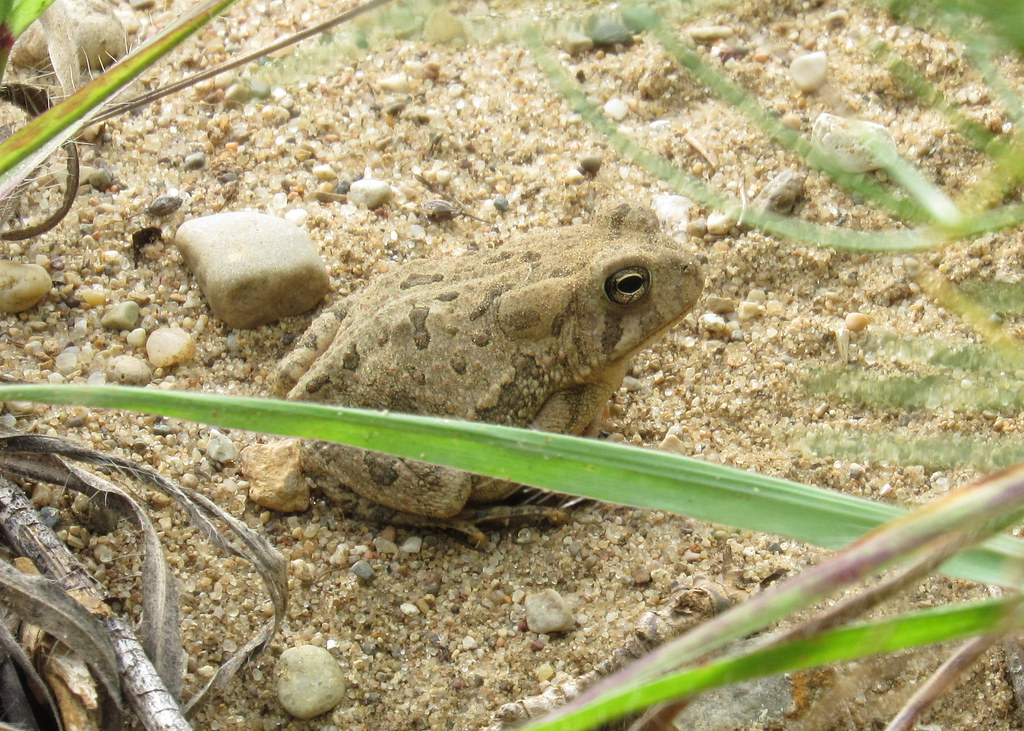 All of these insects serve as excellent food for Fowler’s Toads (Anaxyrus fowleri).  Growing above it was this unusual flower, the Tall Green Milkweed (Asclepias hirtella), one of the hundreds of species of plants present at this incredibly biodiverse site. 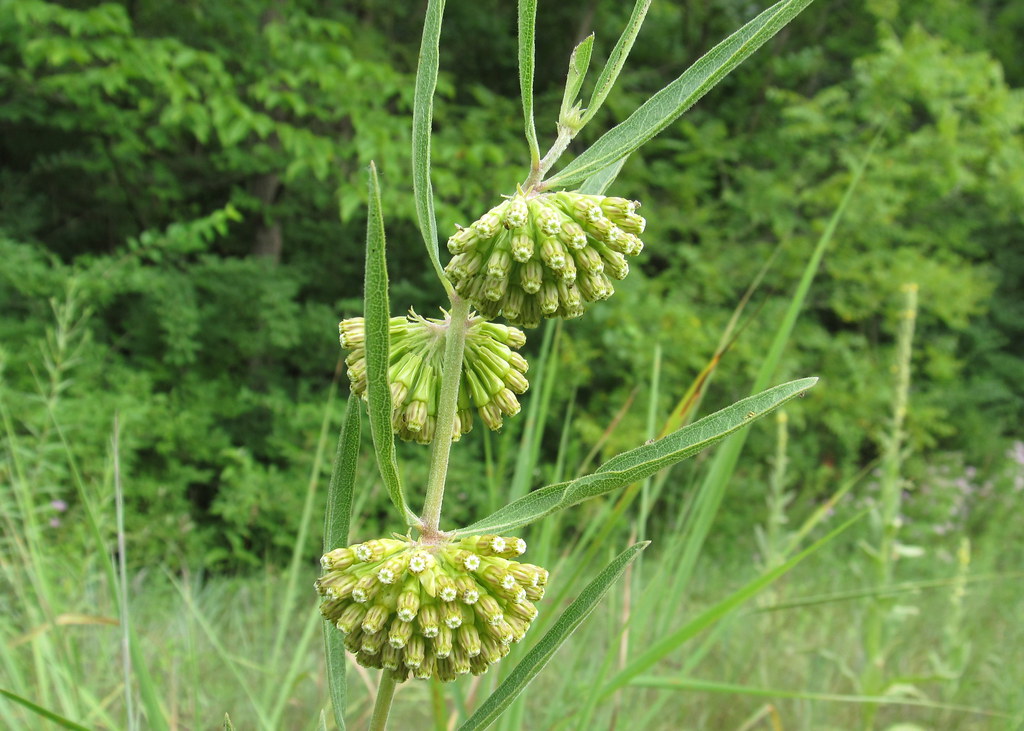 After driving through Revis, I drove my friend Kyle to see his first Western Kingbirds (Tyrannus verticalis) in Illinois.  Birds of the Great Plains and further west, Western Kingbirds expanded into St. Louis (where dozens can be seen in industrial areas!) and upriver into Havana, Illinois, showing a strangely consistent fascination with power substations.  I don’t think I’ve ever seen a Western Kingbird in Illinois on a natural perch- they have done well with manmade structures. 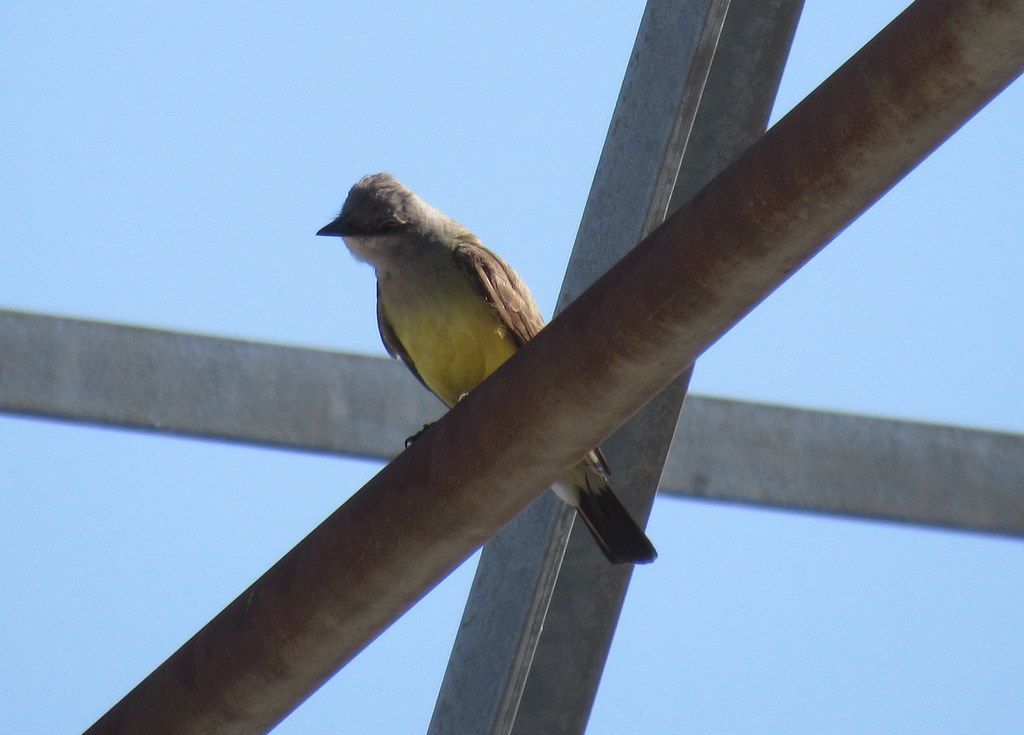 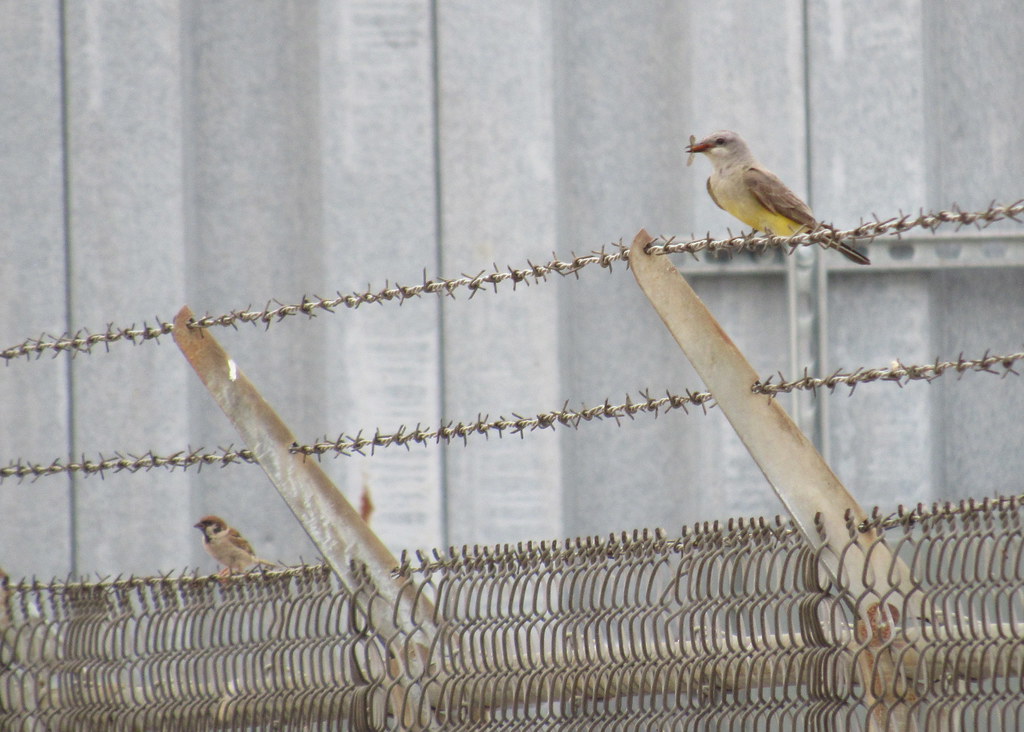 A levee at Chautaqua National Wildlife Refuge, for instance, is the perfect spot to find Eurasian Tree Sparrows, and that’s where I went on the previous day with a different friend. 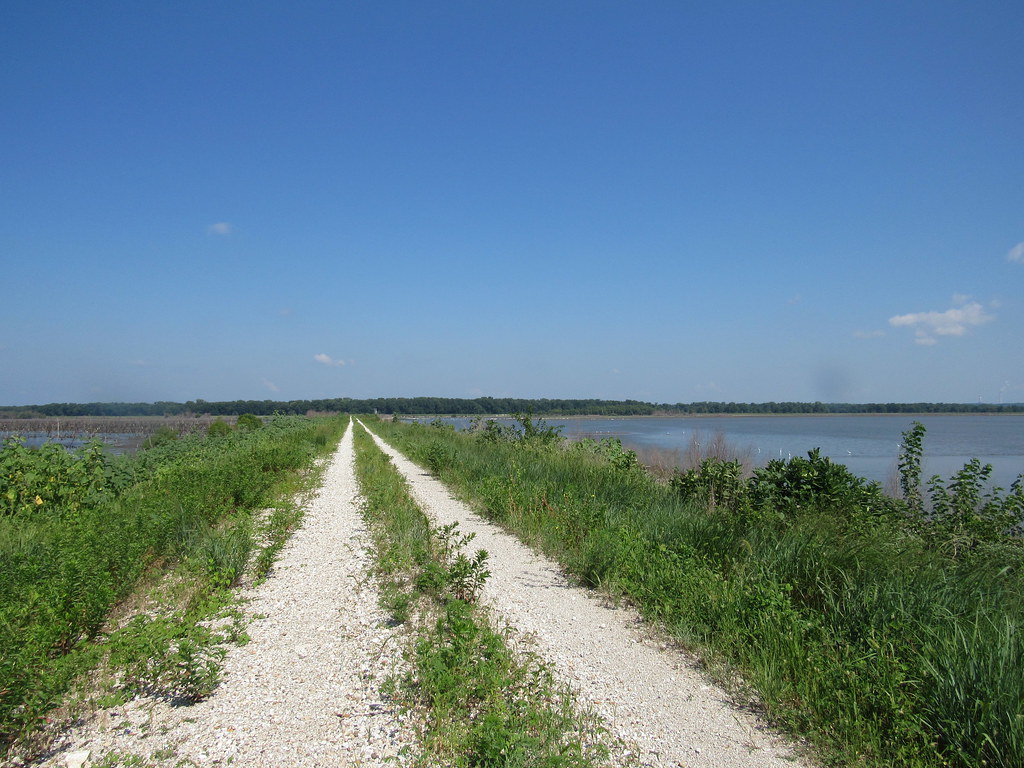 Hundreds of  American White Pelicans (Pelecanus erythrorhynchos), Ring-billed Gulls (Larus delawarensis) and some shorebirds were present here.  Most of the shorebirds were far out- it’s been a bad breeding season up in the Canadian Tundra from whence they come,  so the numbers of shorebirds migrating this year are likely to be uncomfortably low. 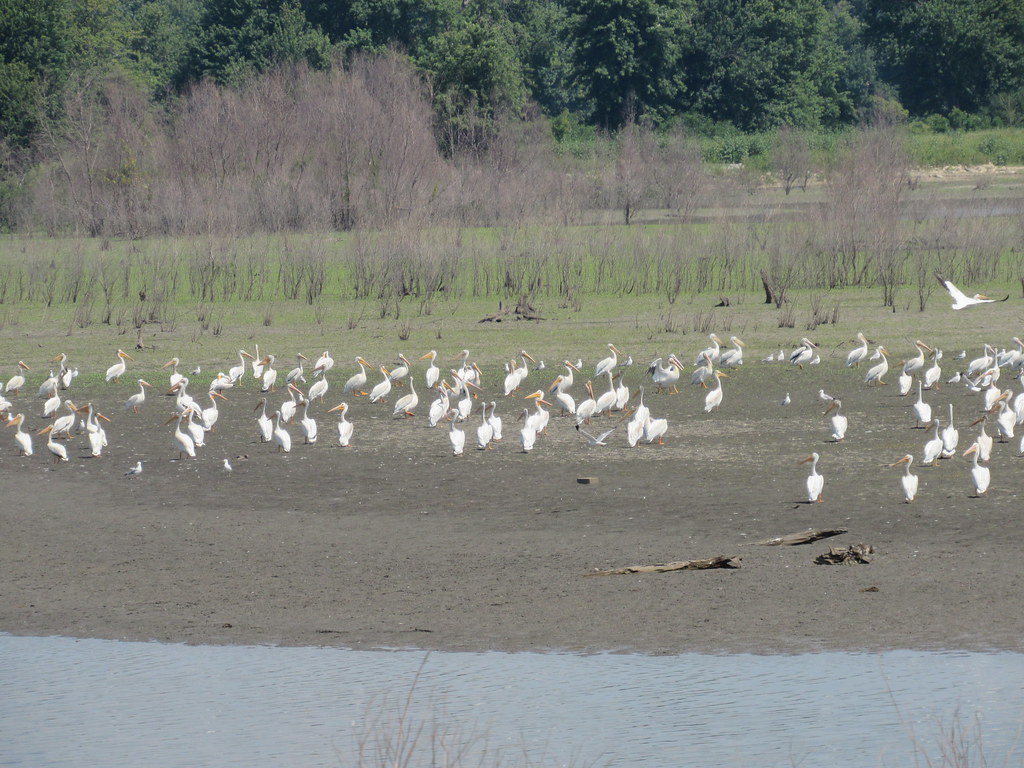 Thankfully, not all is going horribly in the bird world because the pelicans are doing well.  Large flocks like this are becoming more and more common, and they are a delight to watch, gliding nd whirling about in the air.  Pelicans aren’t particularly graceful, but their colossal size makes them readily watchable. While not as long-winged as Bald Eagles, tall as Whooping Cranes, or heavy as Trumpeter Swans, American White Pelicans overall seem to me to be Illinois’ biggest bird. 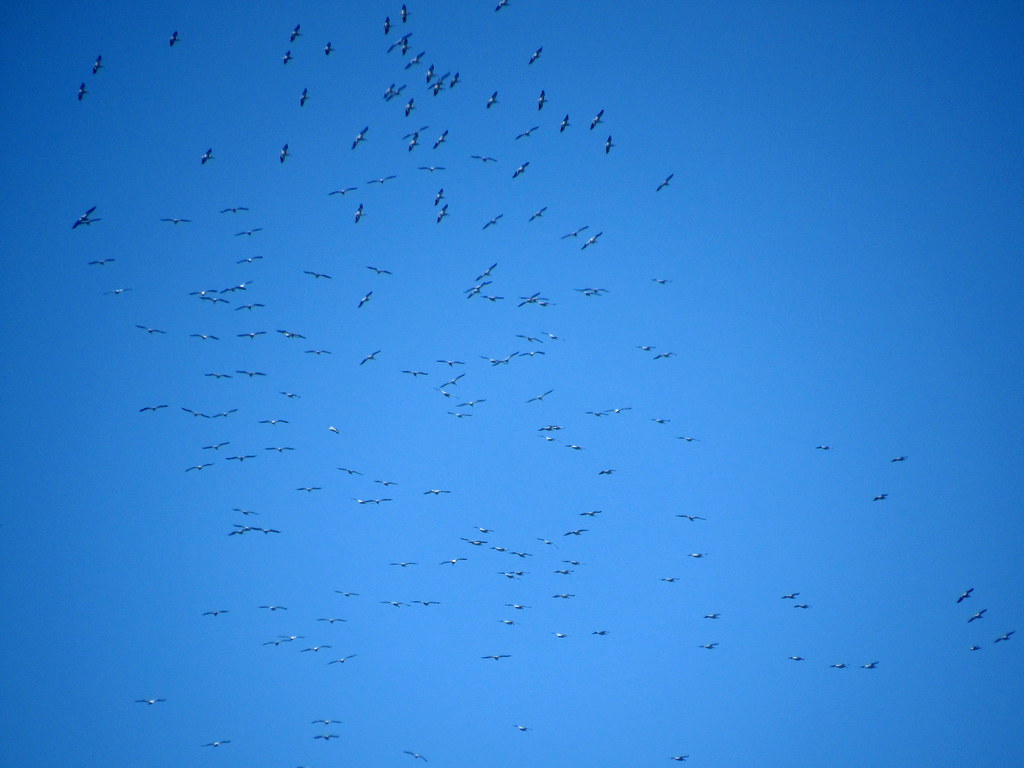 The wetlands here and across the river at Emiquon are being drained to allow seed plants to grow on them, providing food for ducks in the winter and mudflats for migratory birds.  Both Chautauqua and Emiquon are carefully managed by pumping water in or out at the right times of year to maximize the benefit for animals, especially waterfowl.

This Chautauqua-Emiquon area has become a Ramsar Wetland of International Importance, one of several Ramsar Wetlands Illinois has.  (The others are Chiwaukee Illinois Beach up in Lake county (seen here)  Dixon Waterfowl Refuge (seen here) the Upper Mississippi River Floodplain Wetlands (not seen yet, but definitely on my list for later) and the Cache River-Cypress Creek Wetlands (seen here). Hey, I’ve been to all but one of those this year!  A Ramsar Wetland of International Importance designation is basically like winning a conservation Oscar, and it’s great that Illinois has five of them- among US states, only California has more than Illinois does. 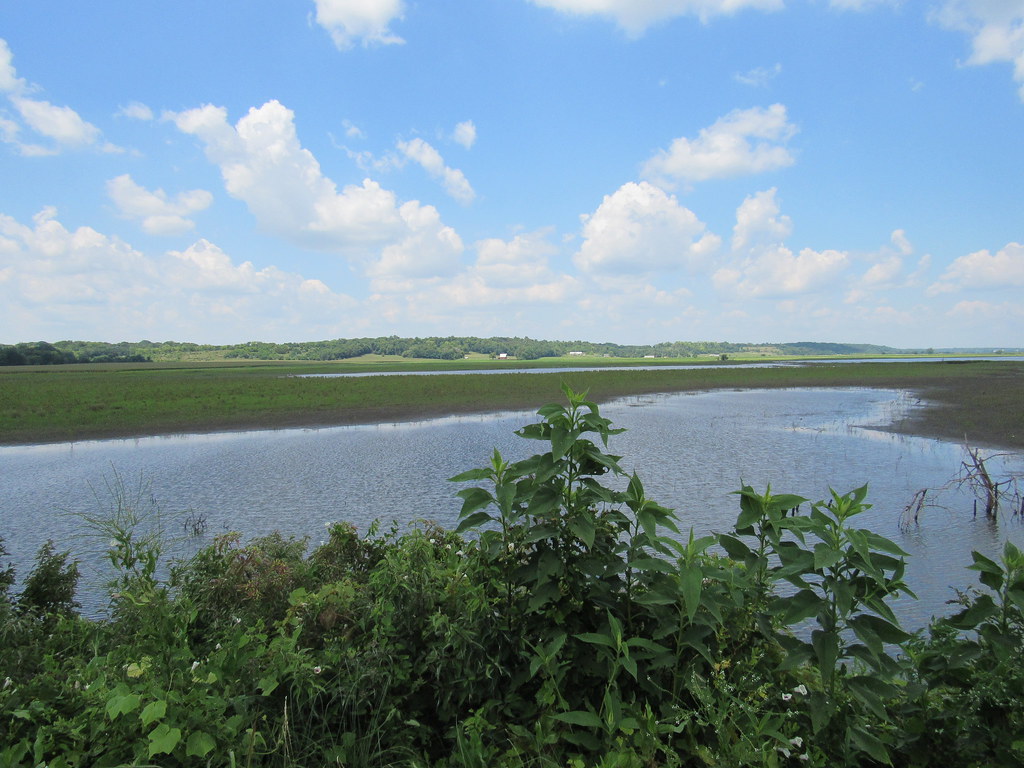 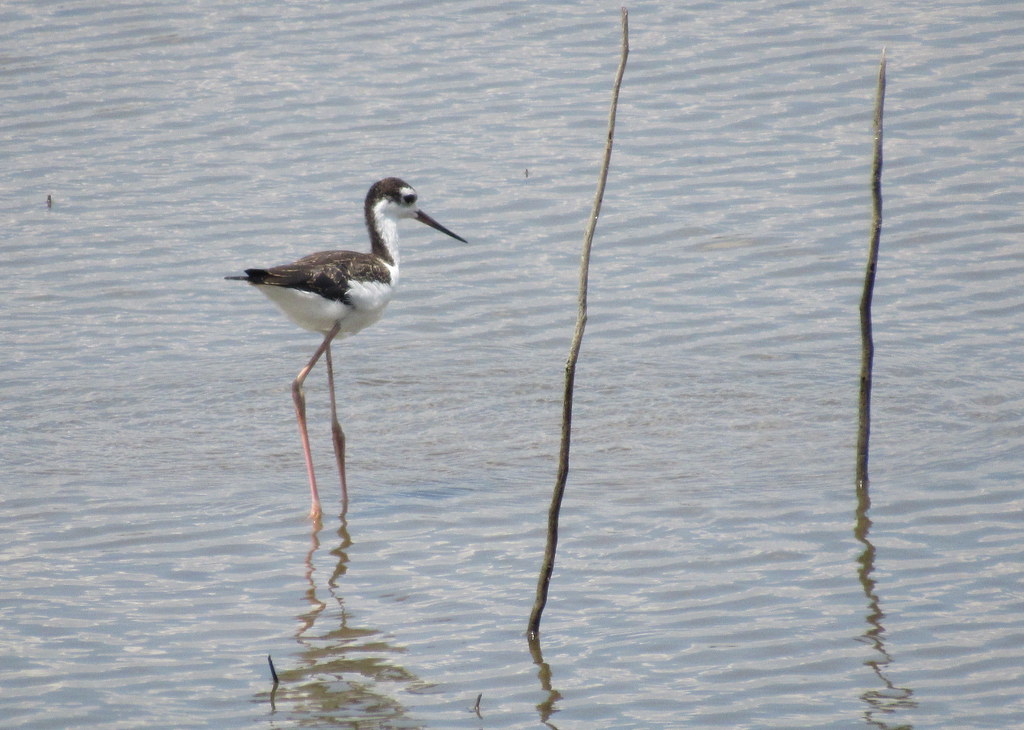 By contrast, these Greater Yellowlegs (Tringa melanoleuca) were content to work together and hunt down prey.  They’ve recently arrived from far northern Canada, so I imagine they’re fairly hungry.  The Greater Yellowlegs still have far to go- all the way to South America! 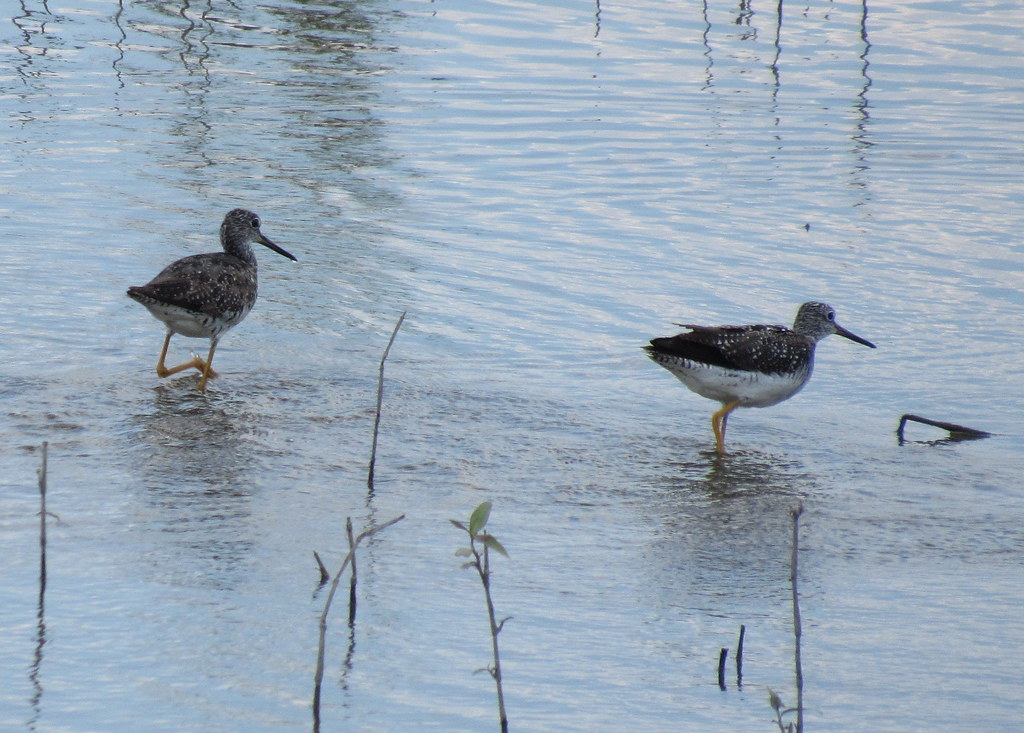 Just as Illinois is a flyover state for many people, so it is a flyover state for birds on their way to other places.  Still, sometimes they stop in and visit, and we’re glad when they do.  Especially when, for instance it’s a Sanderling (Calidris alba) and I haven’t seen one since 2016.  The pale fuzzy bird on the left is, I believe, a Sanderling.  They like sandy beaches and as a result are uncommon inland, away from the Great Lakes (which DO have sandy beaches).  This is one of the world’s longest-distance migrants, traveling from the High Arctic (think top of Greenland) all the way to southern South America or Australia in the winter.

Not bad for a bird seven inches long! 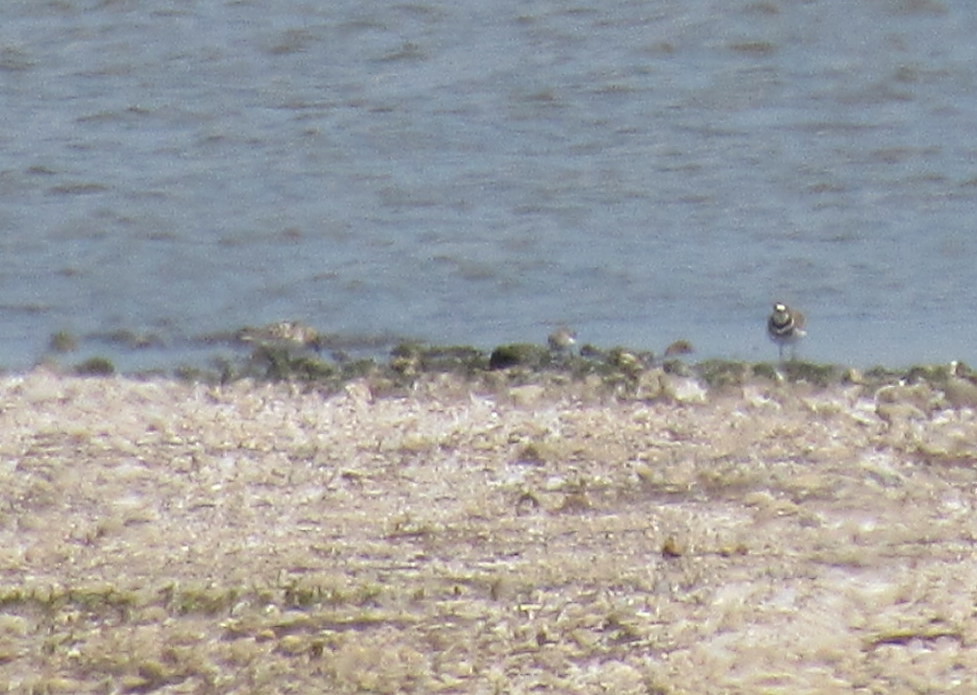 We spent two days and saw over a hundred bird species in Glorious Mason County- not easy to do in late July, when many of them have stopped singing and many more have yet to migrate south.  Despite moving to ostensibly a better spot for nature (southern Illinois)- which IS really good despite what certain Ryans who’ve never been there may say about it – I always end up missing this area when I’m away from it.  It’s the first area I really explored away from my hometown when I got into birding, and it’s a place I can’t help but return to time and again.

I really am Havana great time. 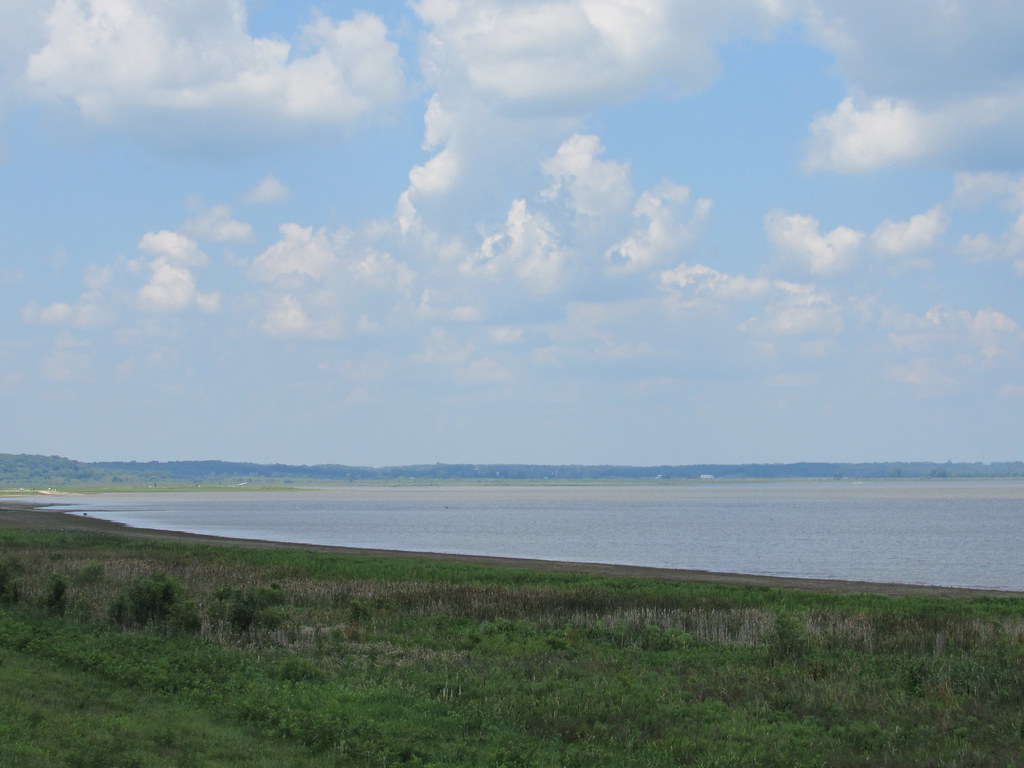