Last actual post I did on here was of the Carlyle Lake Trip.   I’m going to pass over Fall 2018- a lot happened but it’ll take too long to recap. Let’s move into January and February 2019.

I stayed up in central Illinois and spent early January 2019 with my parents, with very few plans of what I would do this year besides studying for the GRE, graduating college, finding a job, etc.  On January 7 I decided to get out and about on a warmer day and go looking around a nearby marsh in the Lick Creek Wildlife Area.  This resulted in my finding two unusual records. 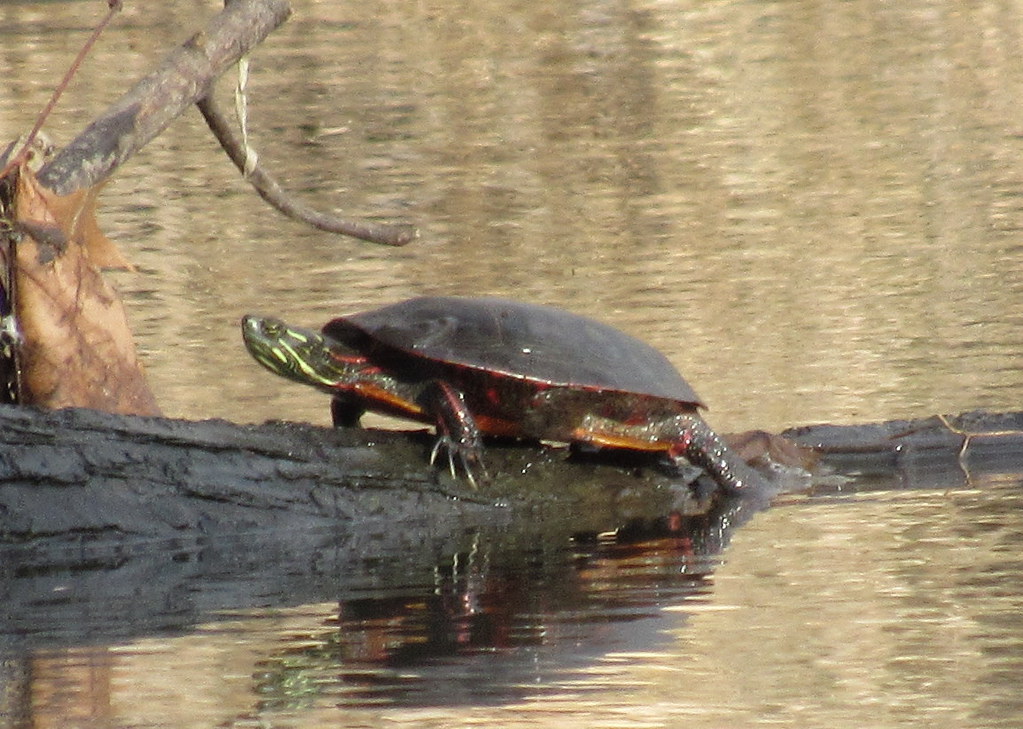 First up was a turtle- in particular, one of Illinois’ more common turtles, the Midland Painted Turtle (Chrysemys picta)  I’ve never had a reptile before an amphibian in January.  This turtle, however, can be winter-active when it wants, and as this day exceeded 50 degrees Fahrenheit in temperature the turtle, one of a few, was out basking in the sun. 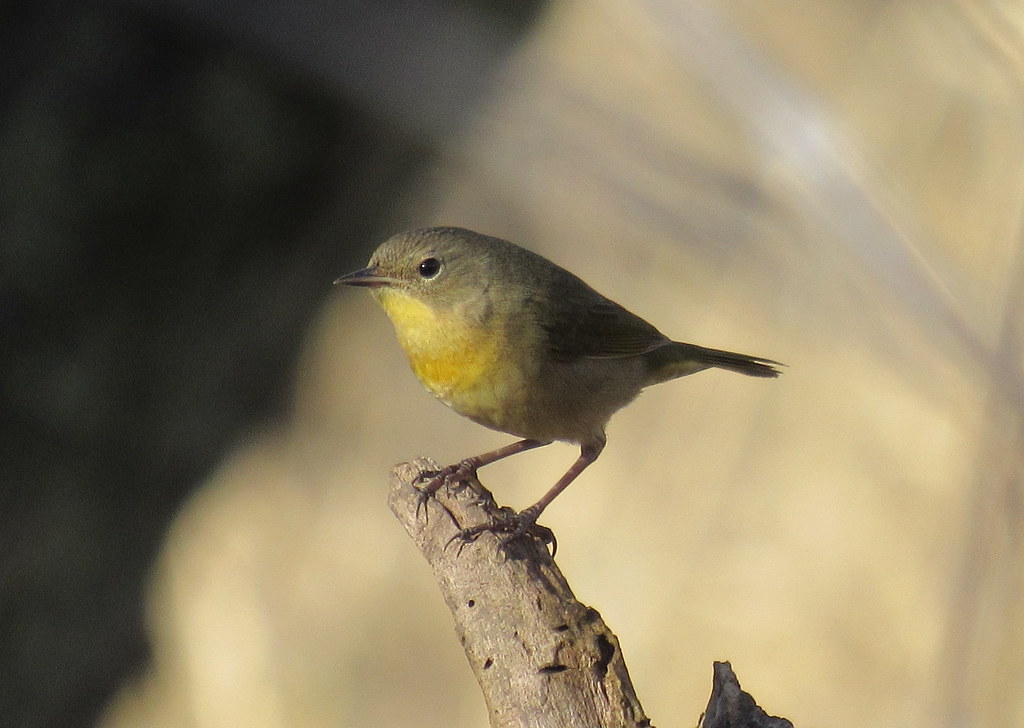 The second and far more ridiculous of my two finds was a wintering Common Yellowthroat (Geoythypis trichas).  This warbler species is supposed to be down on the Gulf Coast at this time of year- not hanging out by the side of a creek in central Illinois!  This was one of TWO I found in January, the second down at Larue-Pine Hills Research Natural Area in Union co. Illinois, both in marshy grasslands with open water. 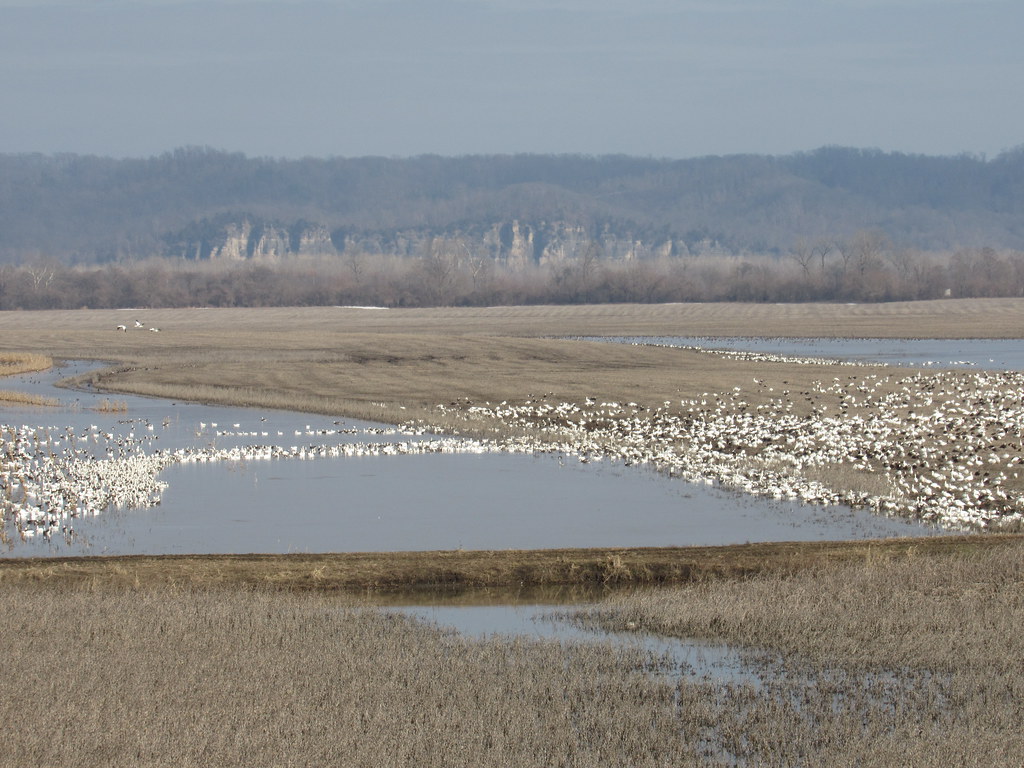 After a couple of weeks, I went south for my last semester of college, to the Shawnee Hills.  I’ve earned a reputation in certain corners of the internet for praising Southern Illinois a lot, and this isn’t unearned.  As the landscape above shows (taken from Grand Tower Island) the Snow Geese wander around this area in January, and in great numbers, and with great scenery as a backdrop, and everything is “great” and I’m overusing that word now and this is a run-on sentence and I don’t know how to end it.  Ope, there we go. 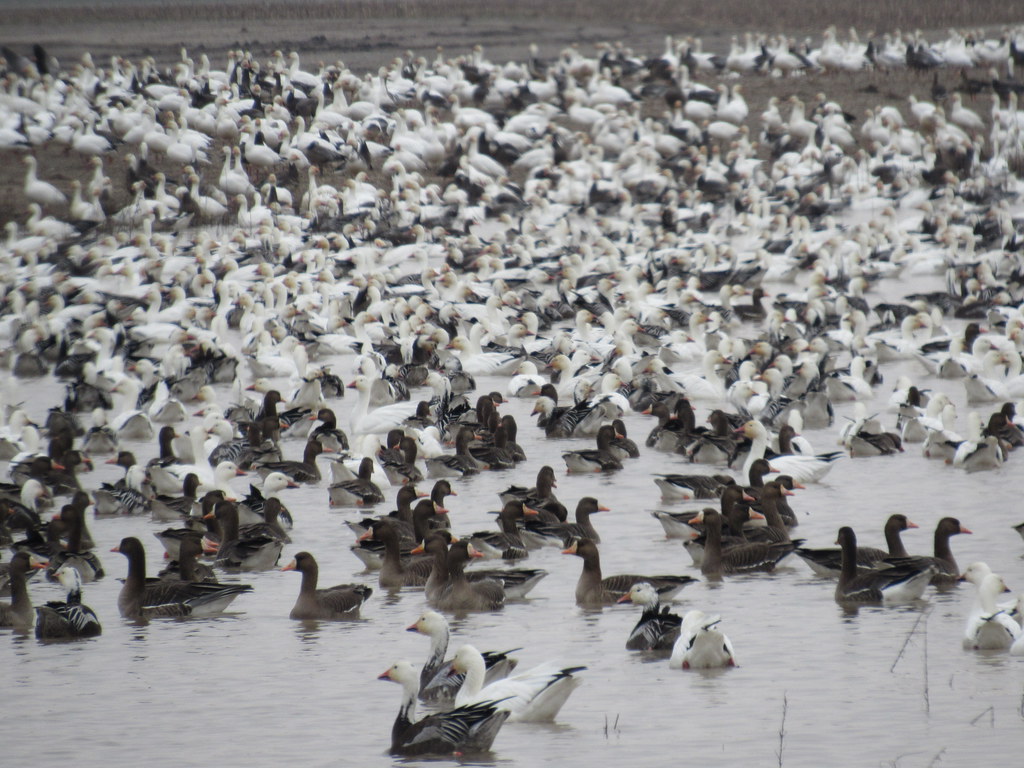 Here’s those Snow Geese (Anser caerulescens), along with a few Greater White-fronted Geese (foreground, orange bills and brown bodies, Anser albifrons), hanging out in a nearby shallow wetland just off Route 3 in Jackson co Illinois.  They’ve all mostly migrated out of here by now, but for two months the air was thick with Snow Geese down here.

Snow Geese aren’t the only large, mostly white birds to pass through this area… 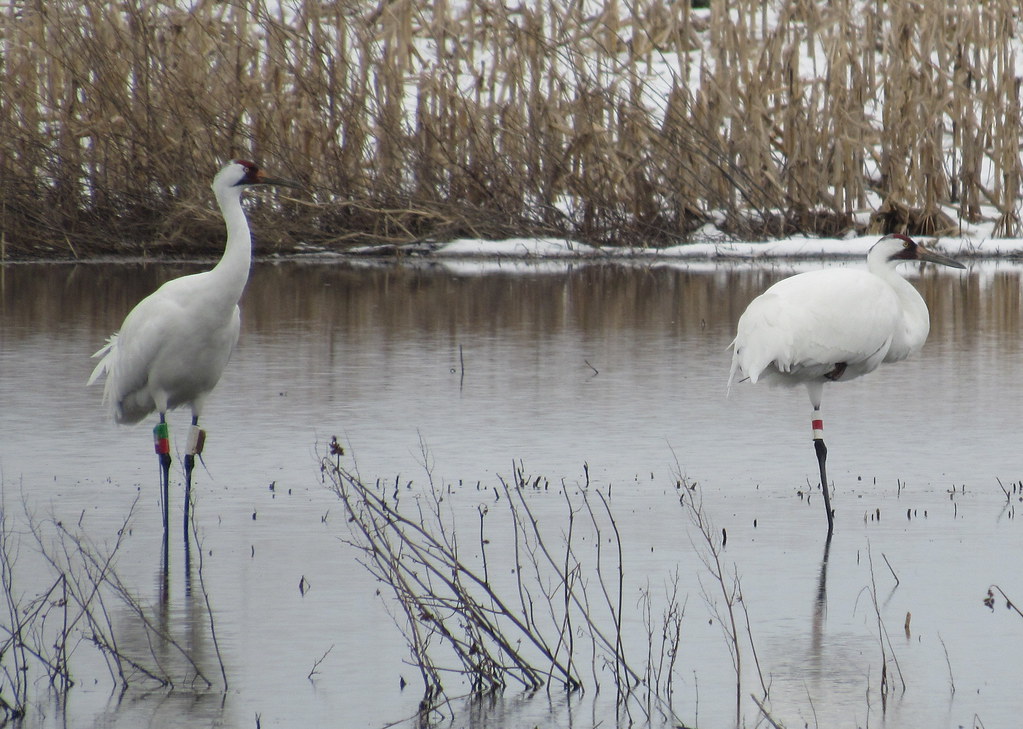 WHOOPING CRANES!  A pair of these incredibly rare, endangered birds (Grus americana) overwinter in a secret location in Southern Illinois.  This pair will fly back to Wisconsin in the summertime, where they’ve been reintroduced. Note that they were photographed from inside a car and we used a decent amount of zoom.  Don’t approach Whooping Cranes too closely, as there are less than a thousand of them in the world and scaring them could potentially do considerable harm. 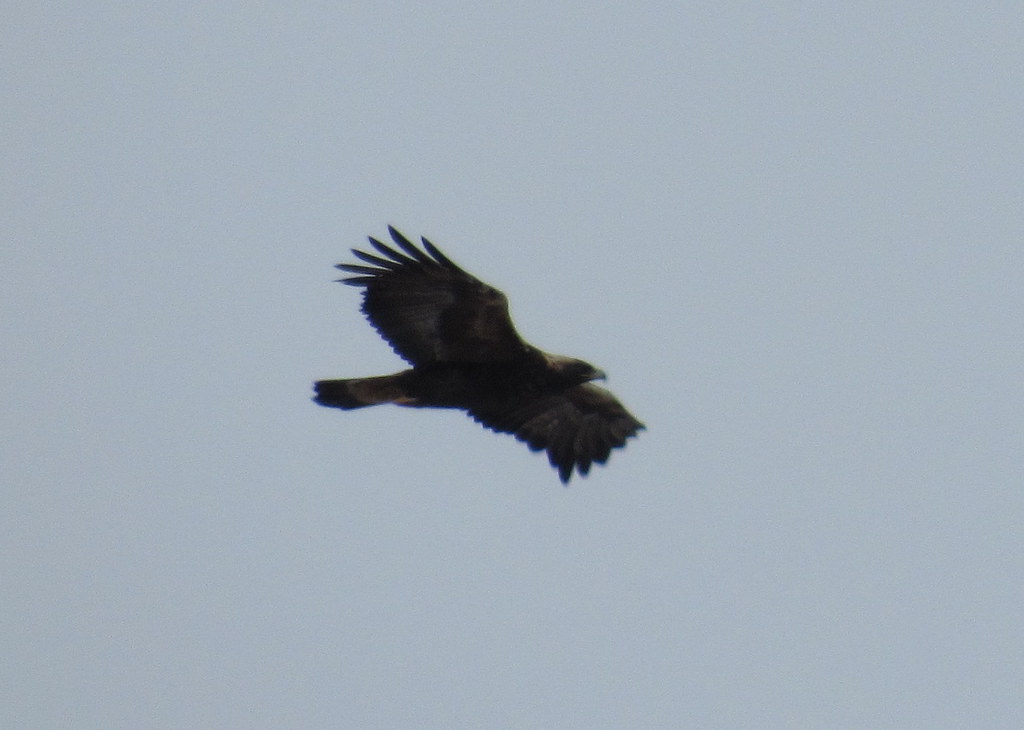 Another quite rare bird I found (this one personally) in January was a pair of Golden Eagles (Aquila chrysaetos) , one of which is photographed.  I found a third one at Larue-Pine Hills a month later, in late February. These birds are uncommon migrants through southern Illinois.  Back in the 1970s, Golden Eagles were recorded annually in parts of southern Illinois, following massive flocks of Canada Geese as they made their way south to forage here.  However, more recently farmers have started plowing their fields in the spring, leaving some corn remaining in their fields overwinter, and geese distributions shifted.  Snow Geese, Ross’s Geese, and Greater White-fronted Geese came in and now feed upon the remains of corn in the area, while Canada Geese remain much further north. (This is potentially oversimplifying the shift in geese, to see some more causes read this article linked here) The Golden Eagles shifted their range also, although some still come down this far south after ducks and geese. 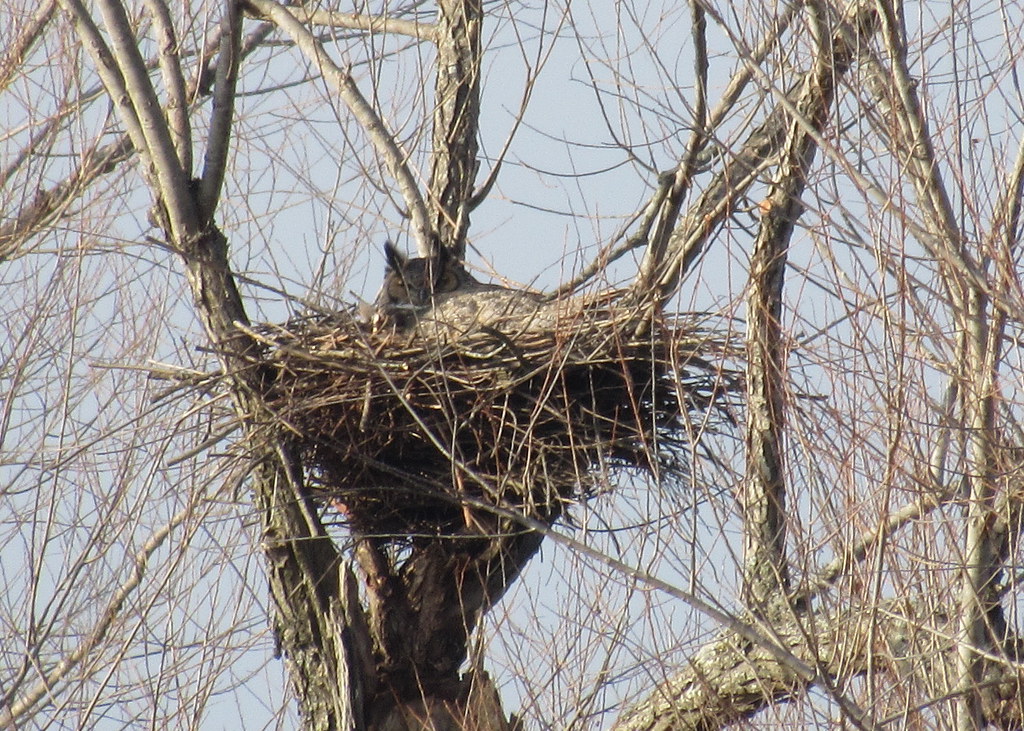 In addition to the rarer birds, I found this Great Horned Owl (Bubo virginianus) occupying a nest somewhere in the Mississippi River Valley.  Unlike many bird species, Great Horned Owls nest during the winter and typically take over other bird’s former nests. 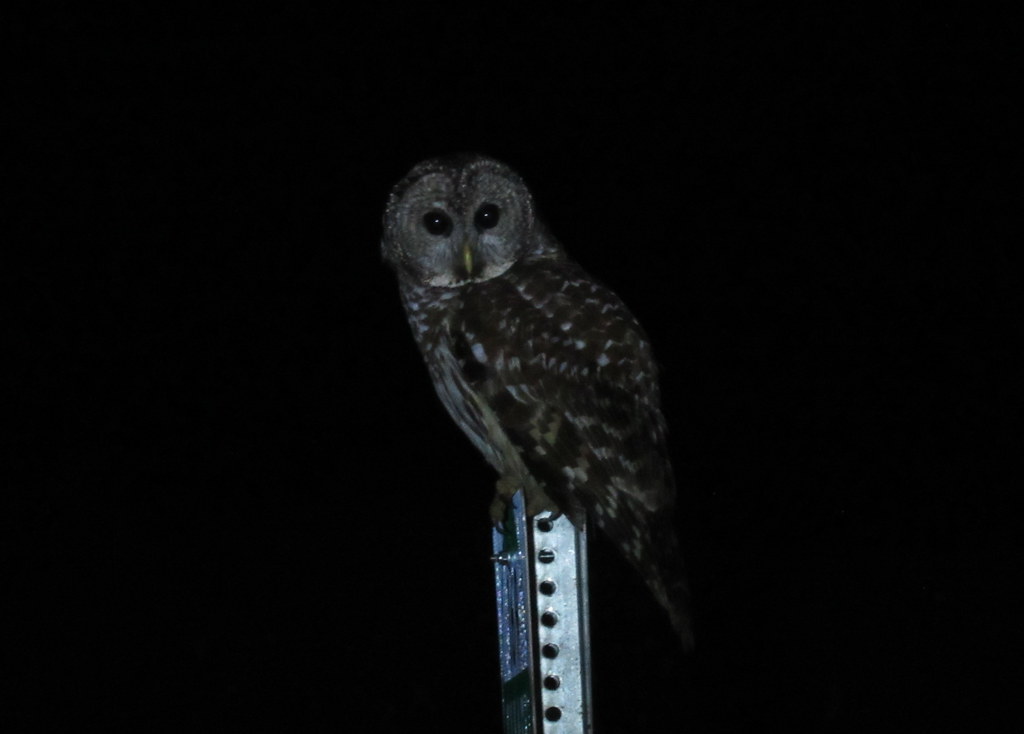 While driving around looking for salamanders the other night, some friends and I came across this Barred Owl (Strix varia) sitting on a road side and quite willing to pose for photos. 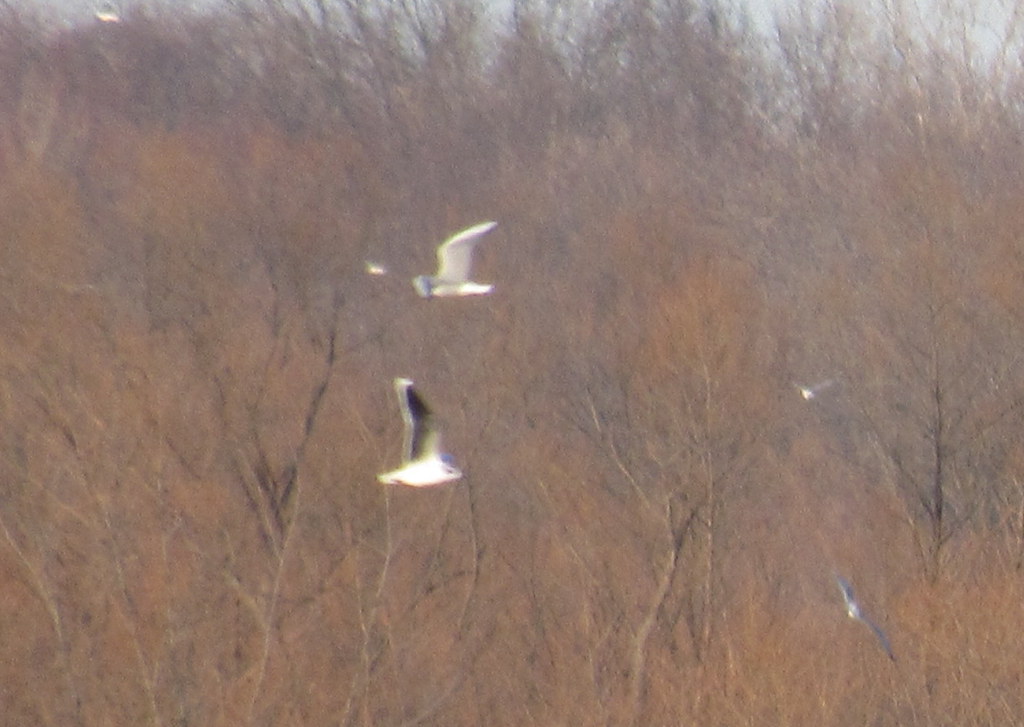 One of the rarest birds I’ve gotten to see of late, and the only new one (lifer!) for me was this Little Gull (Hydrocoloeus minutus), the bird with the black underwing in the blurry photo above.  A predominately Eurasian species that rarely nests in the US and Canada, Little Gulls sometimes tag along with large flocks of other gull species and migrate through Illinois.  I’ve tried and failed to find several over the years, and I finally found this one at Carlyle Lake with a friend last week. 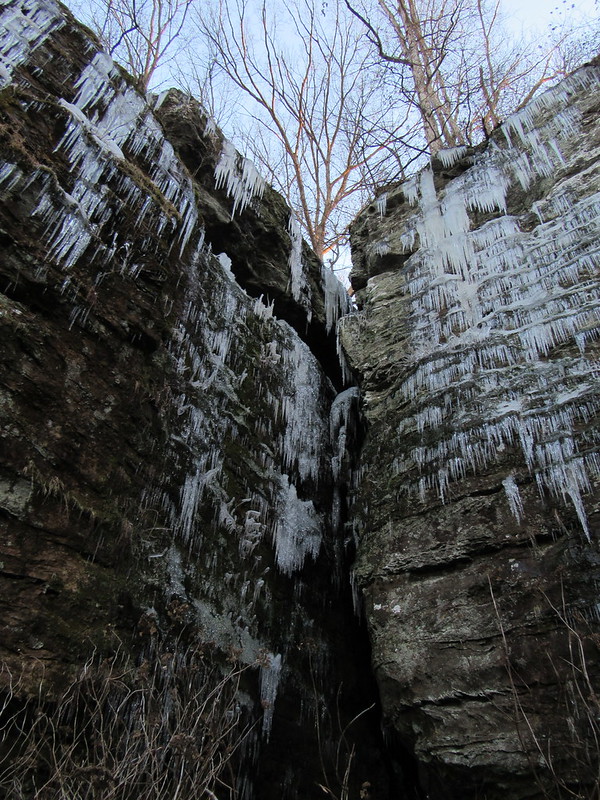 Alright, after spamming all those rarer birds, let’s cool off with some ice formations from Trillium Trail at Giant City State Park, before moving on to small and cute birds. 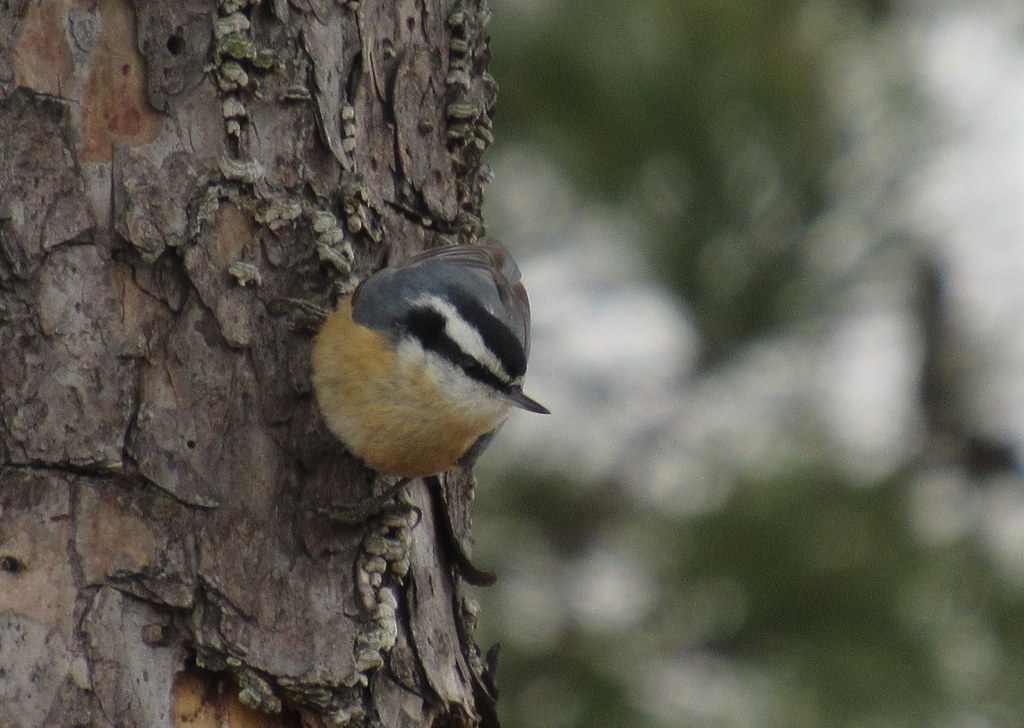 Over this winter, an unprecedented irruption (winter movement) of Red-breasted Nuthatches (Sitta canadensis) occurred in the Eastern United States.  This species of bird lives in the boreal forests of Canada and feeds upon pine and spruce seeds.  In years of a poor seed crop (like this year) they move south in numbers to feed on pine seeds.  As the Shawnee Hills have many pine plantations and naturalized pines, Red-breasted Nuthatches thrive here during the winter.  Coming from the Canadian wilderness, Red-breasted Nuthatches have limited fear of people. 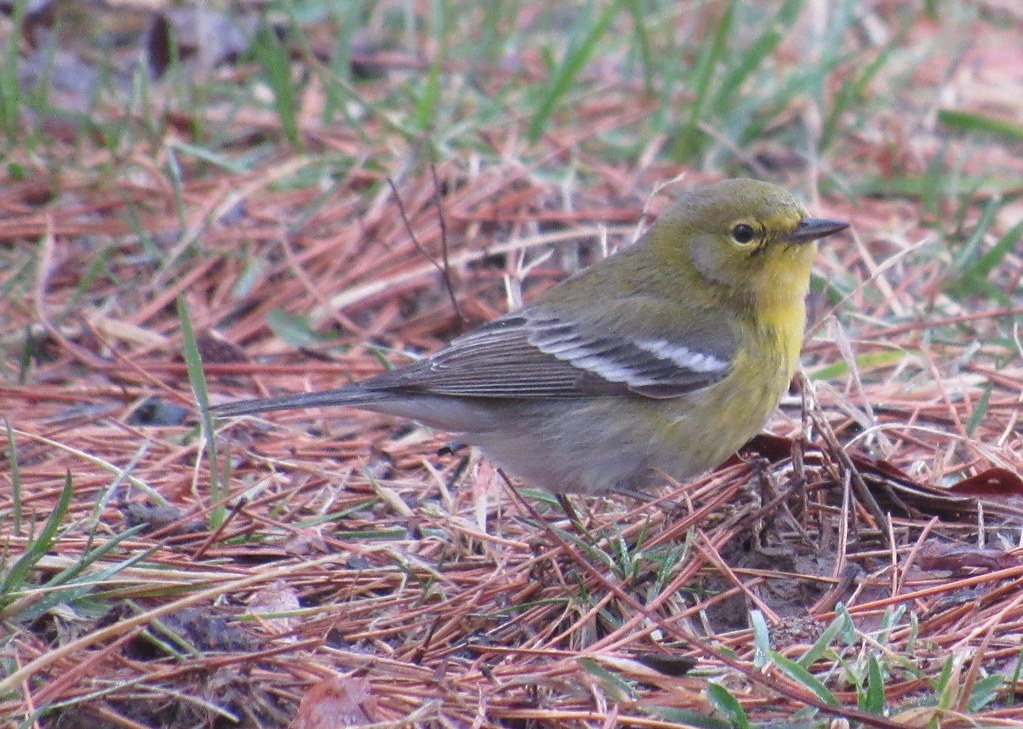 Unlike the Red-breasted Nuthatch, Pine Warblers (Setophaga pinus) are found predominantly in the Southern US and up until the last few years they did not winter in Illinois regularly.  However as the climate warms just a bit and the pine plantations grow up and age, Pine Warblers become more and more frequent in Southern Illinois over the winter.

Birds are not my sole interest in life, however, and while they’re one of the few things to look at in January that will look back at you and show signs of life, I have looked for

On iNaturalist, I’ve joined the Illinois Botanists Big Year.  This is a competition to see who can observe the most plant species in Illinois over the course of this year.   I have a decent start going, mostly due to the fact that in residing near the Shawnee Hills I have access to a wide swath of biodiversity and far less snow cover than Northern Illinois.  Actually,  I might be downplaying my lead a little too much.  As of 3/4/19, I have 299 plant observations of 143 species.  The second highest observer in the competition is at 95 observations of 87 species.  I don’t expect to win overall- there’s a lot of time left and far more experienced botanists participating- but it definitely feels great to be #1 for now.  For more information visit this link here to go to the project’s homepage. 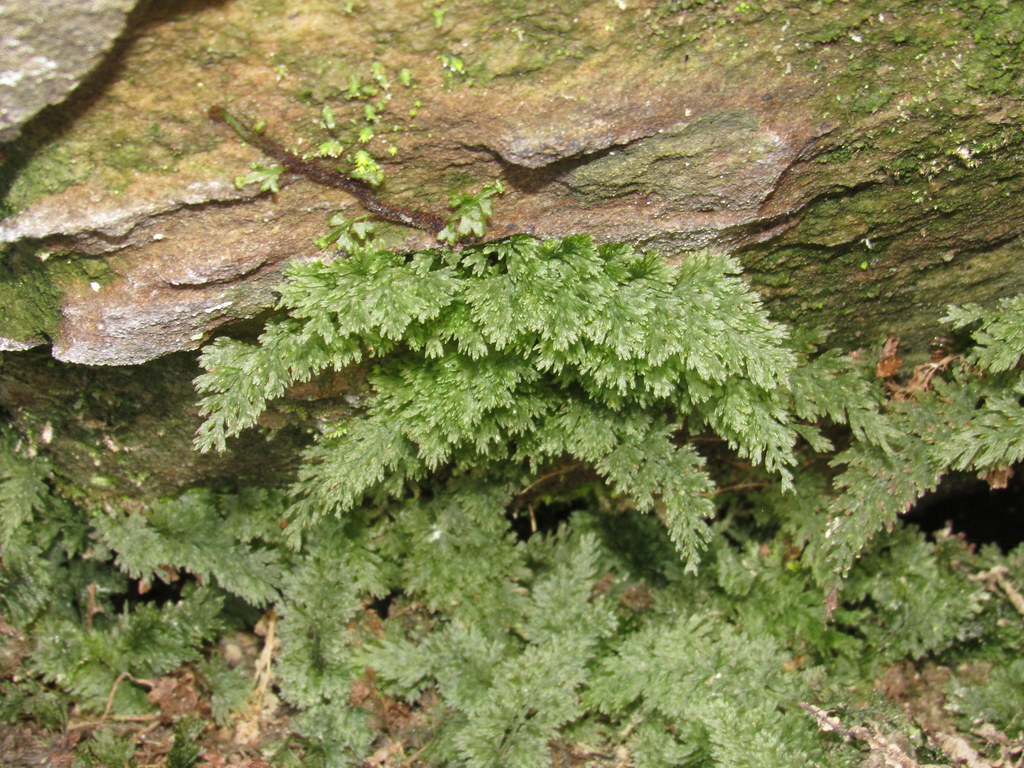 Arguably the best plant I’ve seen this year was the Appalachian Filmy Fern above (Vandenboschia boschiana).  This bizarre fern with fronts one cell layer thick only grows in fully shaded, south-facing sandstone or other acidic rocks, with constant high humidity. It’s a VERY specific microhabitat, and as a result this fern is state-endangered in Illinois and only found in a few locations. I took a walk back to one of the locations in February and found it hiding there. 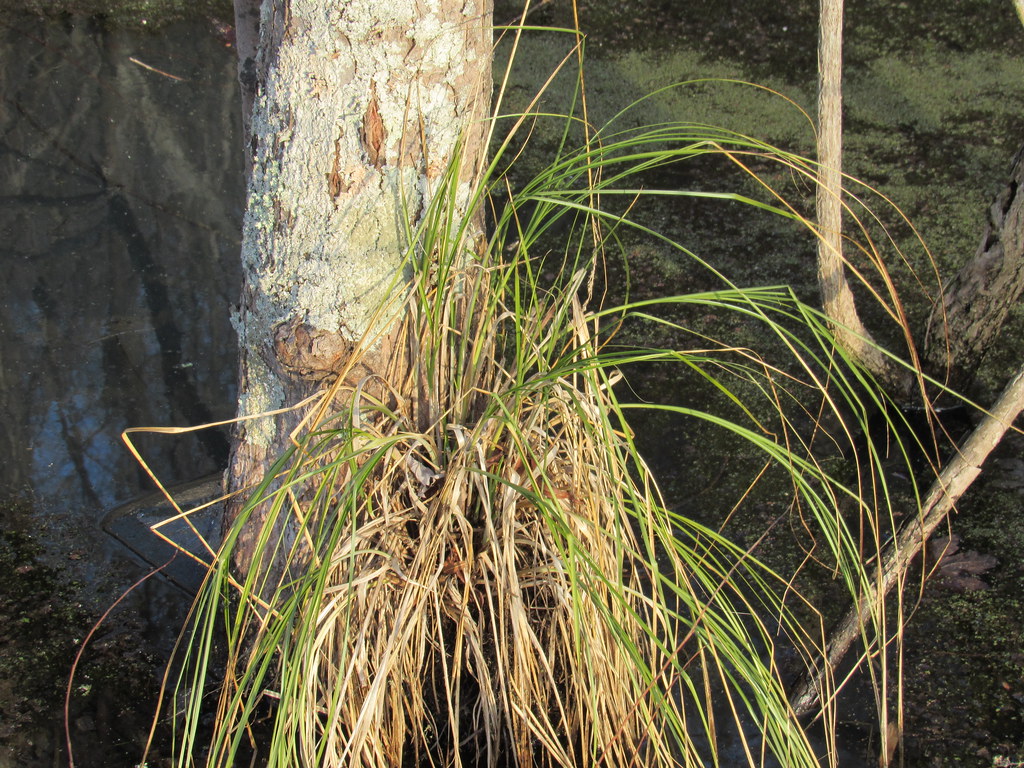 Another rare plant in Illinois is Cypressknee Sedge (Carex decomposita) which grows on stumps, fallen logs, cypress “knees”, the sides of dead trees, and other dead masses of wood in slow-moving waters.   Plants can grow in some bizarre locations. 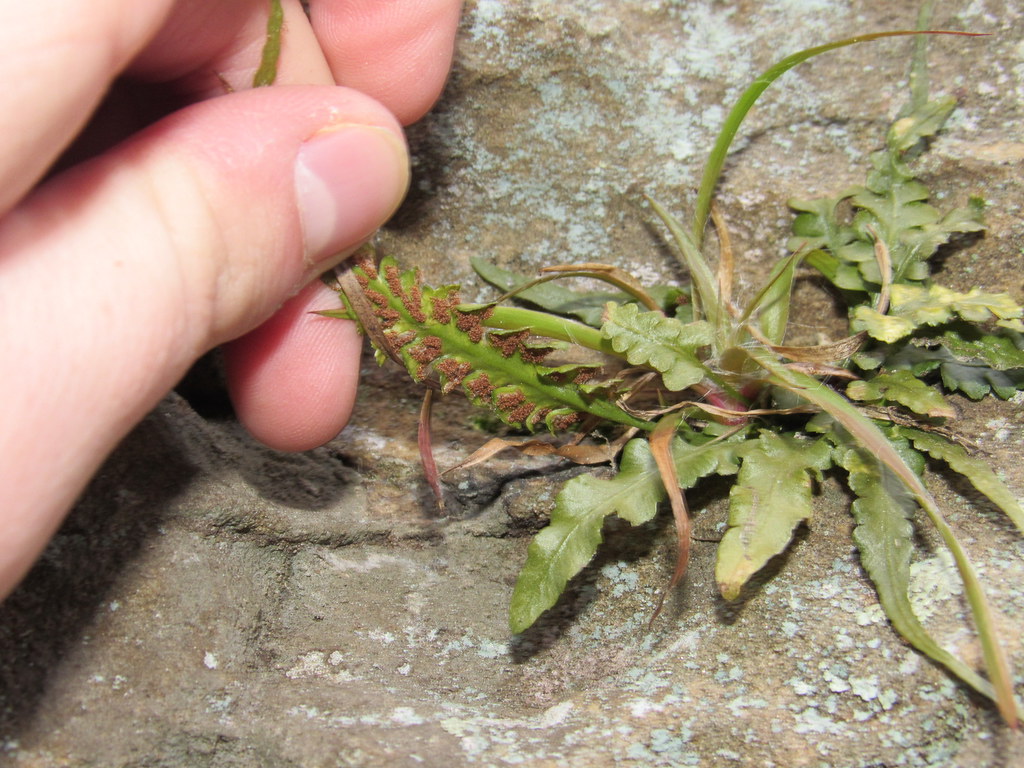 This Asplenium pinnatifidum was a wonderful find, an uncommon fern growing in sandstone in Giant City State Park.  Half the leaves in that photo belong to an unrelated plant. 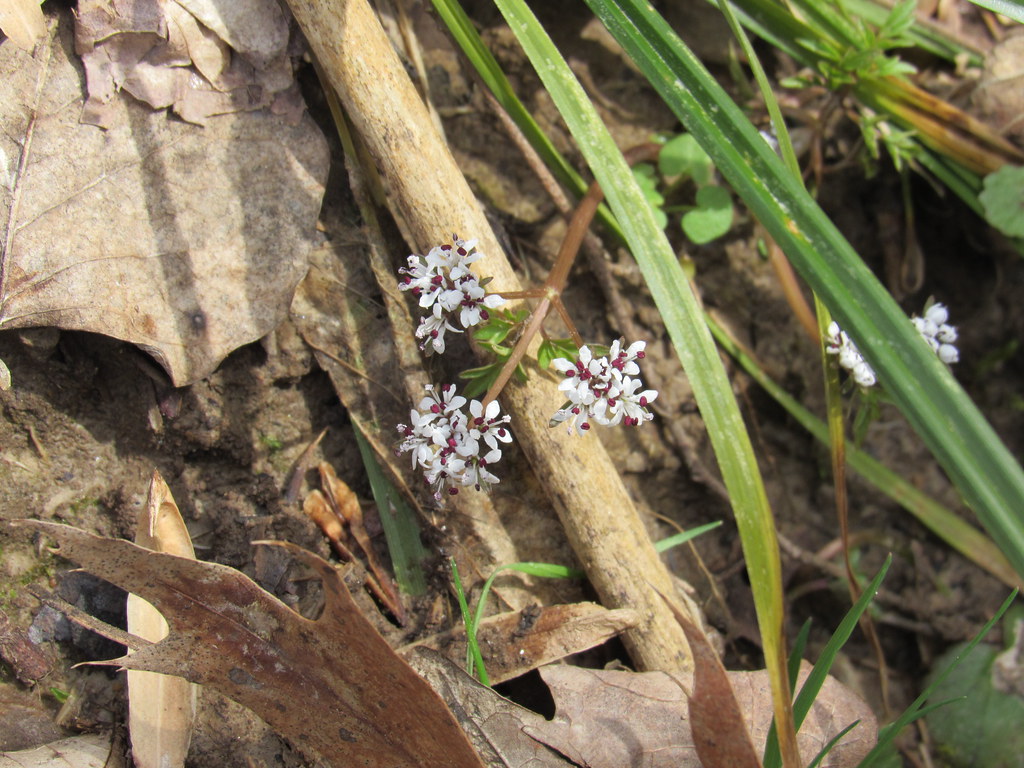 While many people semi-seriously use the prognostications of “Punxsutawney Phil” the groundhog to predict the end of winter, a far better sign of spring is the so-called Harbinger-of-Spring (Eregenia bulbosa), an early-flowering woodland plant shown above.  That being said, I went out and found this plant in late February.  It’s early March and there’s currently snow on the ground.   Plants and groundhogs say what they will, winter doesn’t end until it wants to.

In all seriousness, I was quite glad to find this plant, and while it might be cold now winter does come to an end soon and it will be spring.  The woods along Hutchins Creek (below) will be green before long, and I look forwards to it! 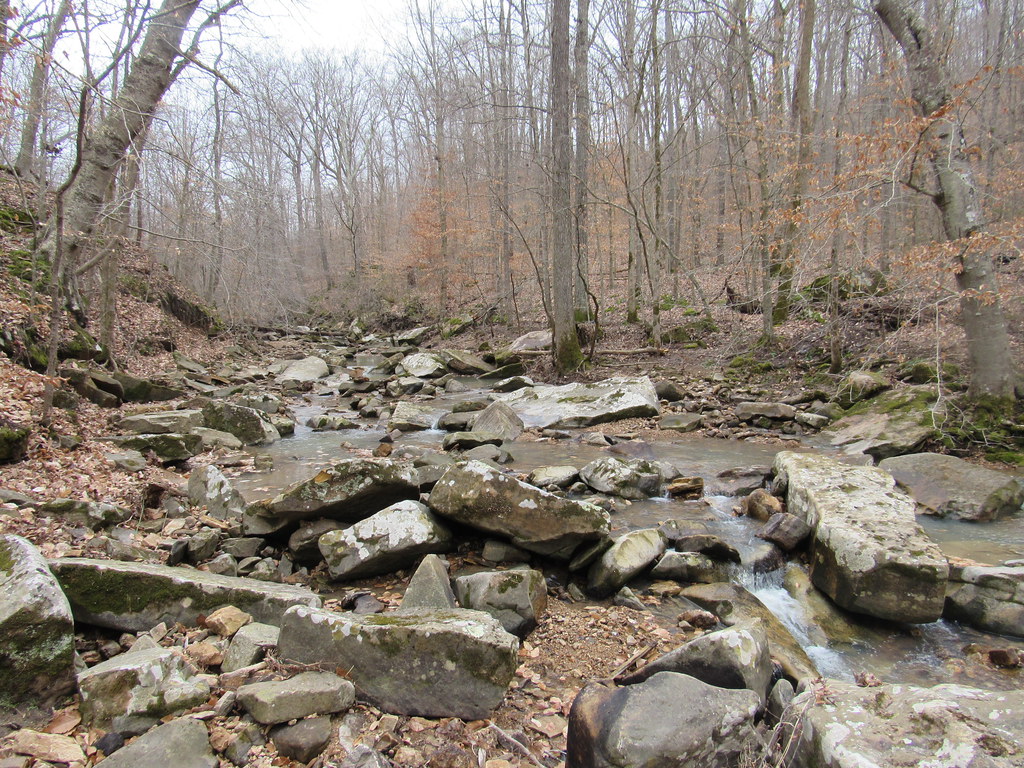 Many people are not aware of the number of salamanders that can move on warm, rainy nights in the late winter.   This causes mass deaths of salamanders when they reach a road and have to cross it on a rainy night.  Thus, friends and I go out and move the salamanders across the road in the direction they’re trying to go, in order that they may survive to reproduce. 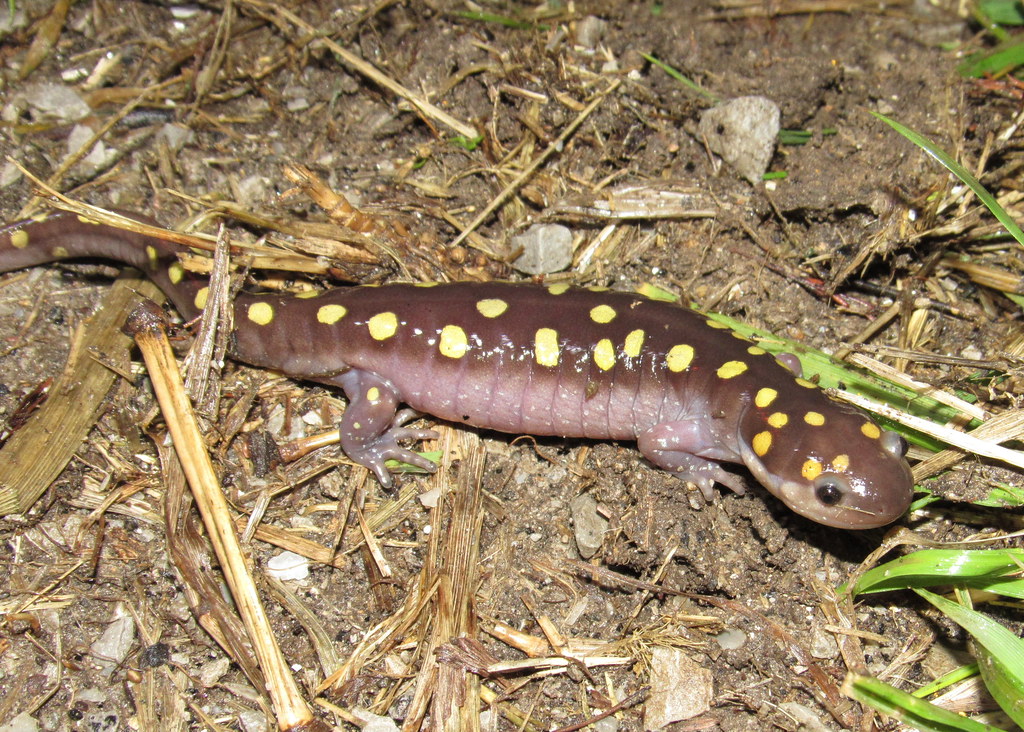 One of the first salamanders of the year is the Spotted Salamander (Ambystoma maculatum), found in high-quality woods locally.  A friend and I spent a night moving a half-dozen of these from a busy state highway, including the gorgeous individual shown above.  Salamanders require fishless wetlands, typically large vernal (springtime-only) pools in woodlands, in order to reproduce.  Many die each year during their trek to the pools, and I’m glad we helped a few. 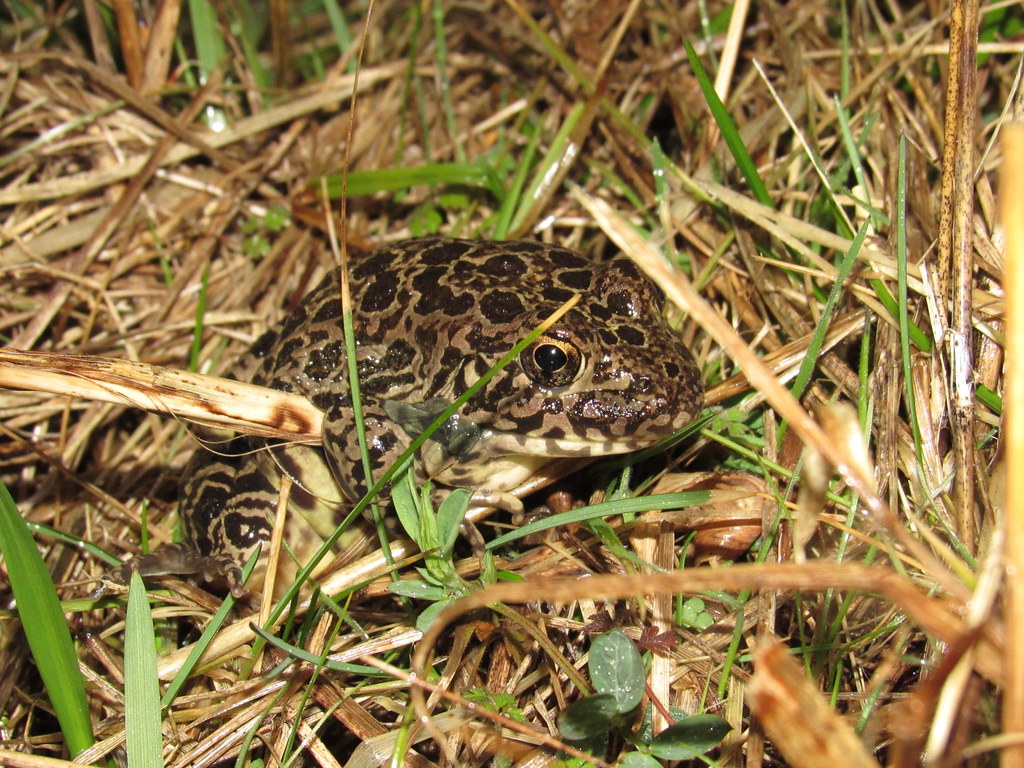 Another specialist of fishless wetlands is the Crawfish Frog (Lithobates areolatus).  This species gets its name from its residence inside crayfish burrows, from which hundreds emerge every February-March in order to spend a week reproducing out in flooded fields.  Crawfish Frogs are extremely light sensitive and will retreat underwater or underground at the approach of light.  Thus, the only way to see one is to drive along a road slowly in an area where the Crawfish Frogs breed and hope for a “dumb” one to remain on the road for a minute when it sees lights.  Thankfully the lights it saw were ours and we got it off the road before it was run over. 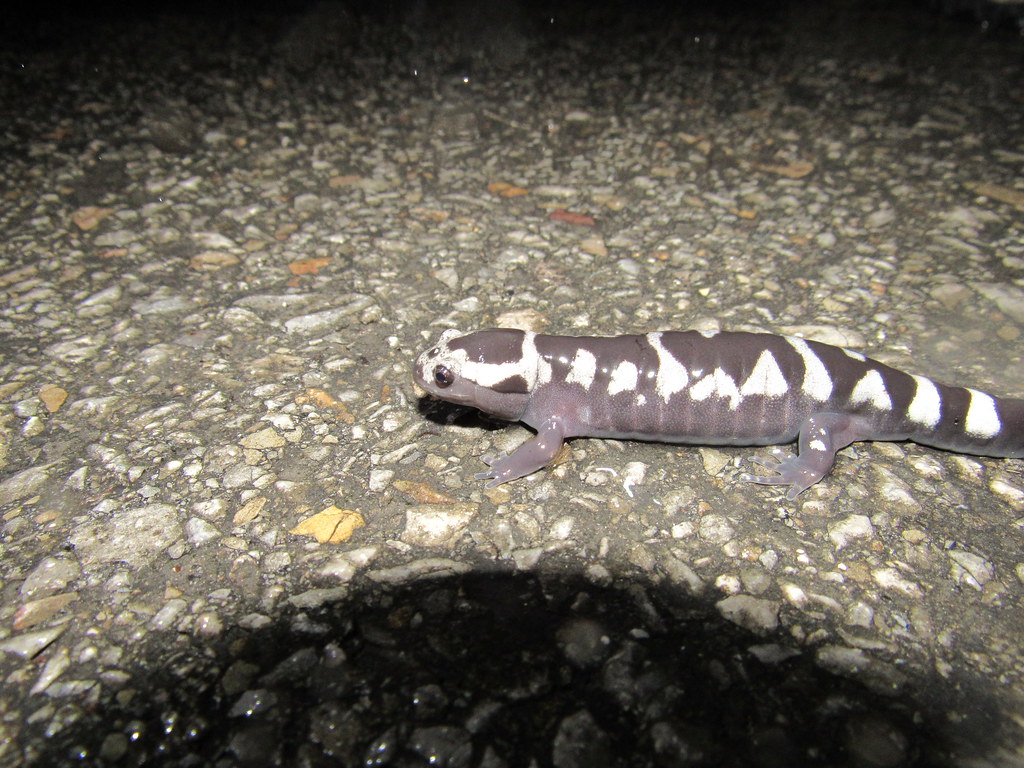 In lowland swamps, another salamander that moves on warm rainy nights is the Marbled Salamander (Ambystoma opacum), perhaps the most beautiful of Illinois salamanders.

PSA, if you can’t tell by now, don’t go driving on warm (40s-50s), rainy nights in wooded or lowland areas, or if you do, keep an eye out for salamanders and other amphibians crossing the road.  If you encounter a salamander on the road, wear plastic gloves (preferentially) and move it across the road in the direction it was initially facing when you first encountered it. 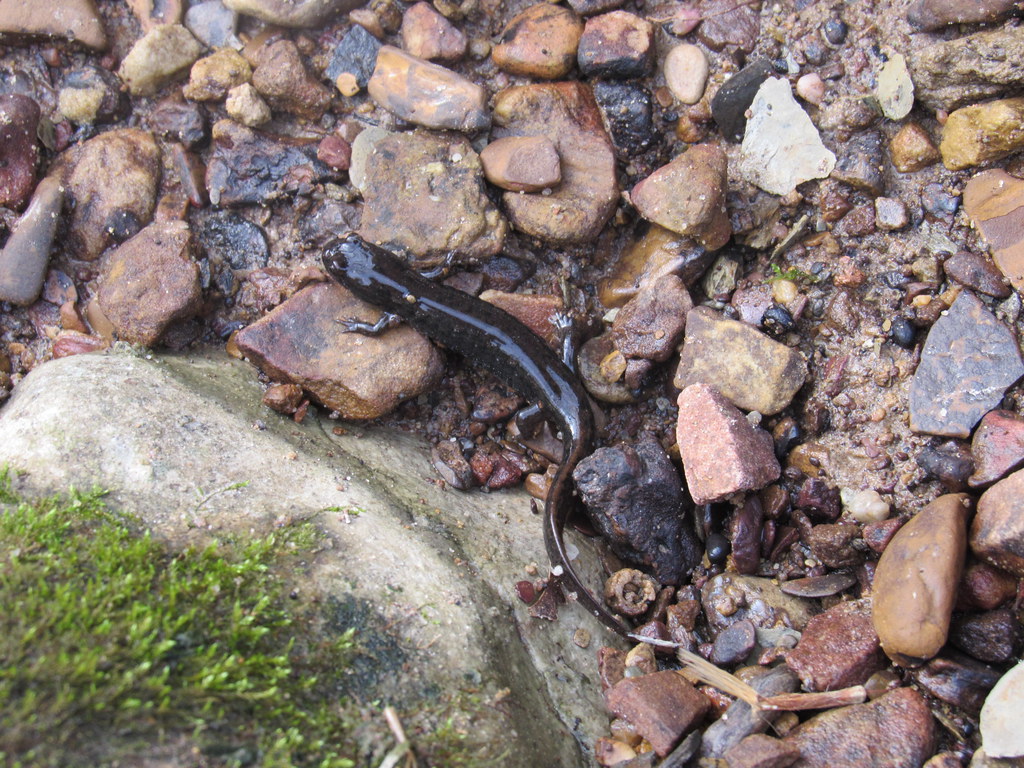 To switch up, here’s a couple individuals of the Northern Dusky Salamander (Desmognathus fuscus).  These salamanders originated in Tennessee, but they are used as fishing bait and as a result were transported to Illinois.  They have since taken over a couple hundred feet of a spring-fed stream and now live there in an isolated colony, the only Northern Dusky Salamander population in the state.  An older one below shows how good they are at hiding on the creekbed. 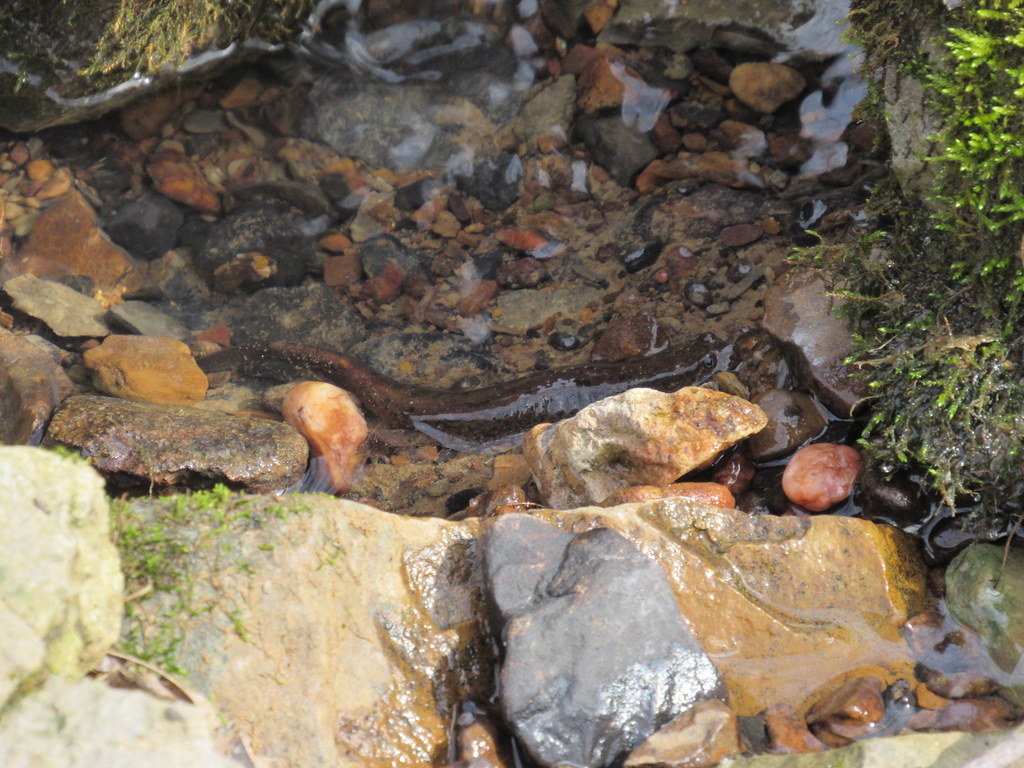 While looking for other salamanders in another spot, a friend accidentally flipped this Blackspotted Topminnow (Fundulus olivaceus) out from under a rock.  I grabbed it and after a quick photo released it straight back into the creek.  This is, so far, the most interesting fish I’ve seen this year, and a first state record on iNaturalist.  It’s nice to get that database in agreement with official data, and it’s nice to get a new fish species I’ve not encountered before. 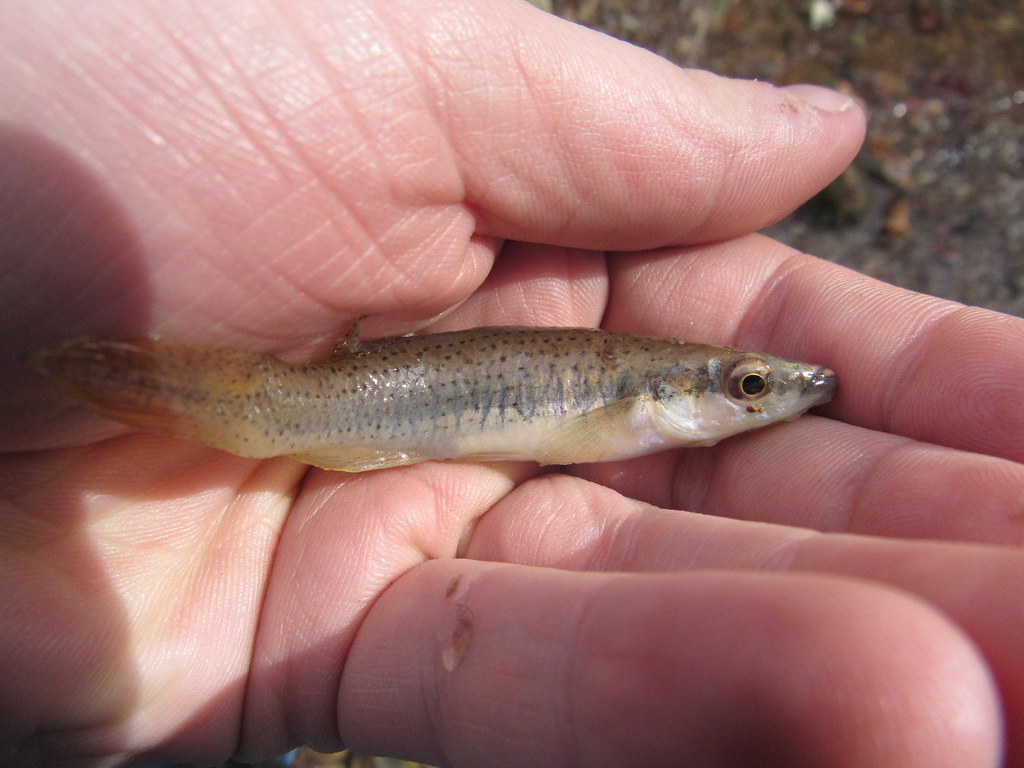 Is this shorter? Probably not. It’s recap of two months worth of observations, however.  Considering that I’ve left out much of what I’ve seen (which y’all can view on my iNaturalist page at this link here) I feel it’s a good length.  That being said, I will try to keep it shorter from now on. Until then, have a good week!