I’m having so much fun with the titles lately. 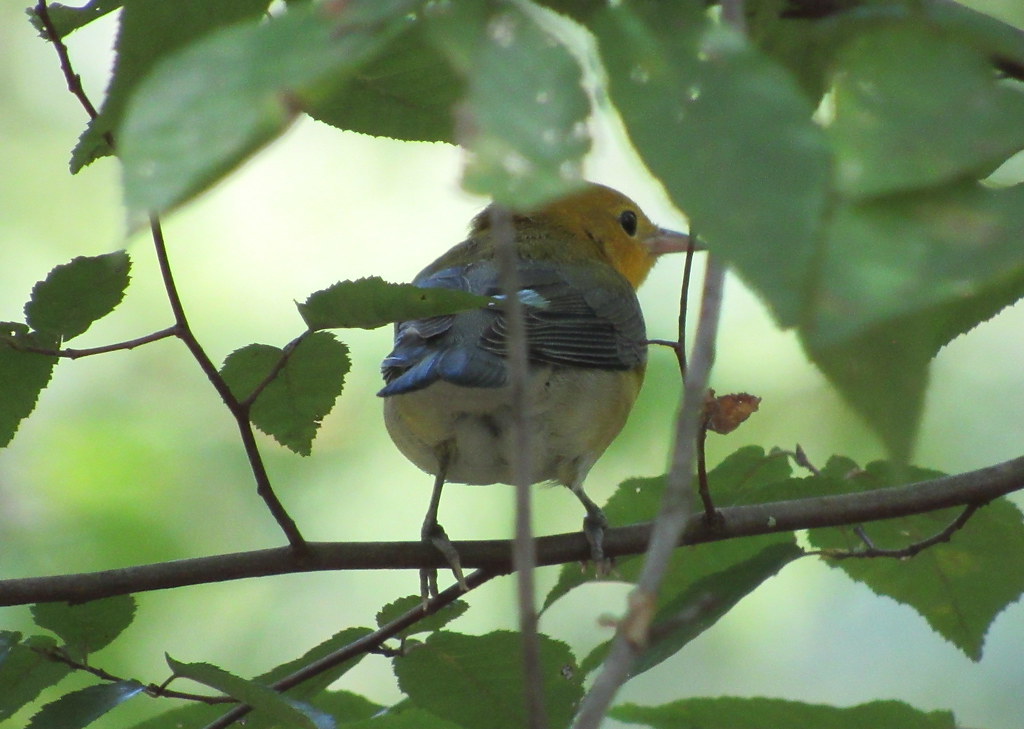 South of the Shawnee Hills in Illinois (yes, you CAN go that far south) lies an entirely new ecosystem, the Gulf Coastal Plain- several hundred miles from the Ocean.  However, thanks to the Mississippi River Valley, this ecosystem extends as far north as Southern Illinois. The Cache River Valley is the northern outpost of the Gulf Coastal Plain.  Here Southeastern species like the Prothonotary Warbler (Protonotaria citrea) live.  This bird is actually a bit late- it should have left for South America in August!  Next spring, it will be pure yellow, with dark wings. 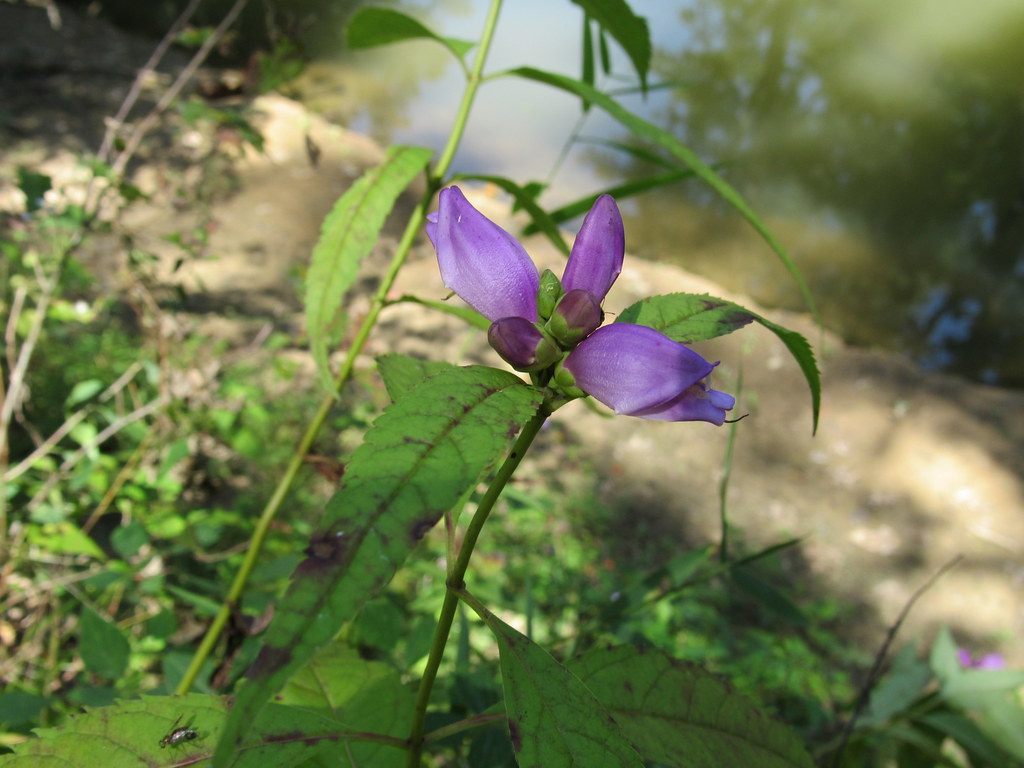 Pink Turtlehead (Chelone obliqua) is an uncommon wetland plant of the Wabash River Valley in Indiana and Illinois, the southern Blue Ridge Mountains in North Carolina, South Carolina, and Georgia.  In between, it’s very patchily distributed.  This is one of those plants where the range map fascinates me, with wide, seemingly-random gaps between populations. 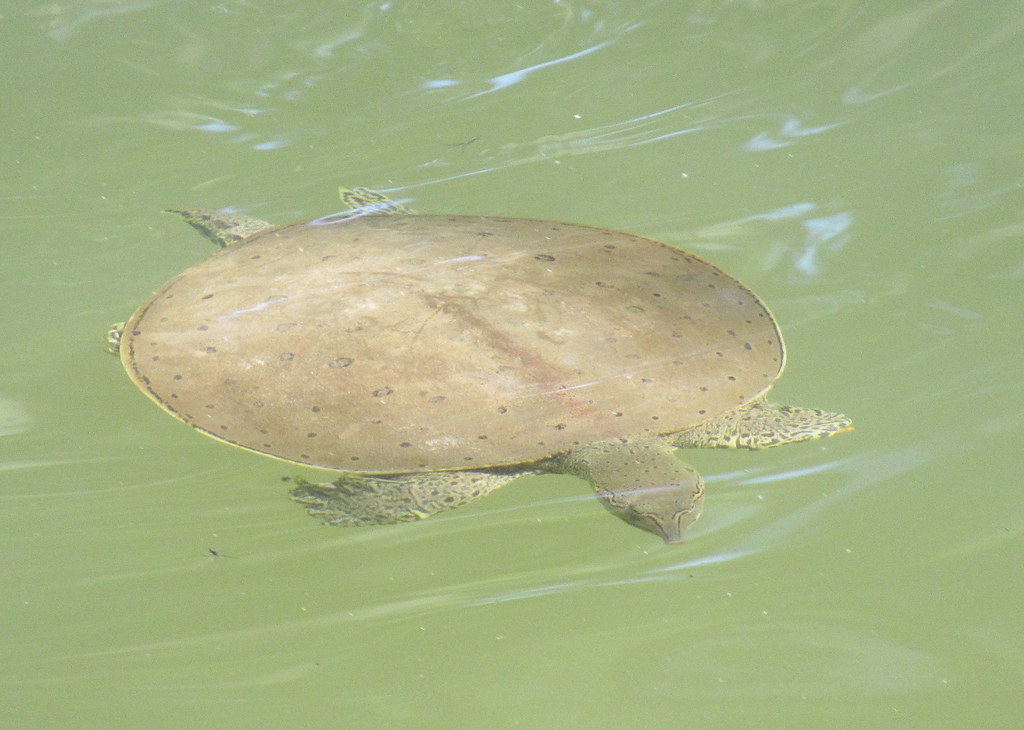 Spiny Softshell Turtles (Apalone spinifera) were fairly common, I saw about five or so.  They enjoyed basking in the nearby creek. 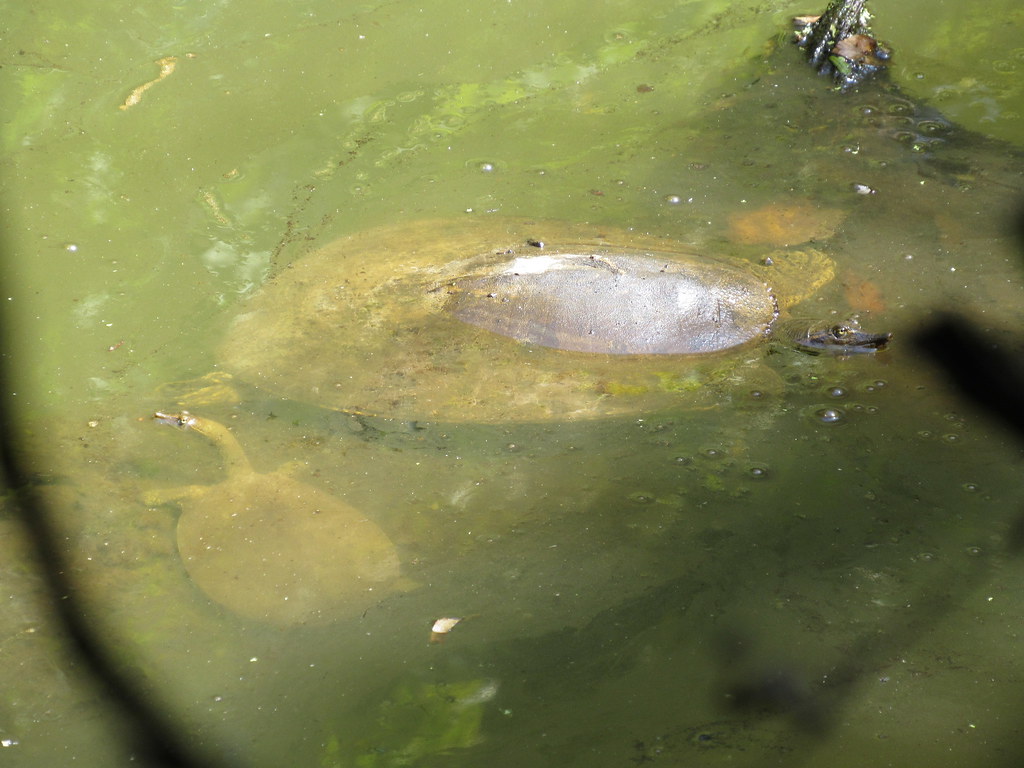 Spiny Softshell Turtles get their name from the spiny growths on their shells, above their necks.  You can see this on the big turtle above. 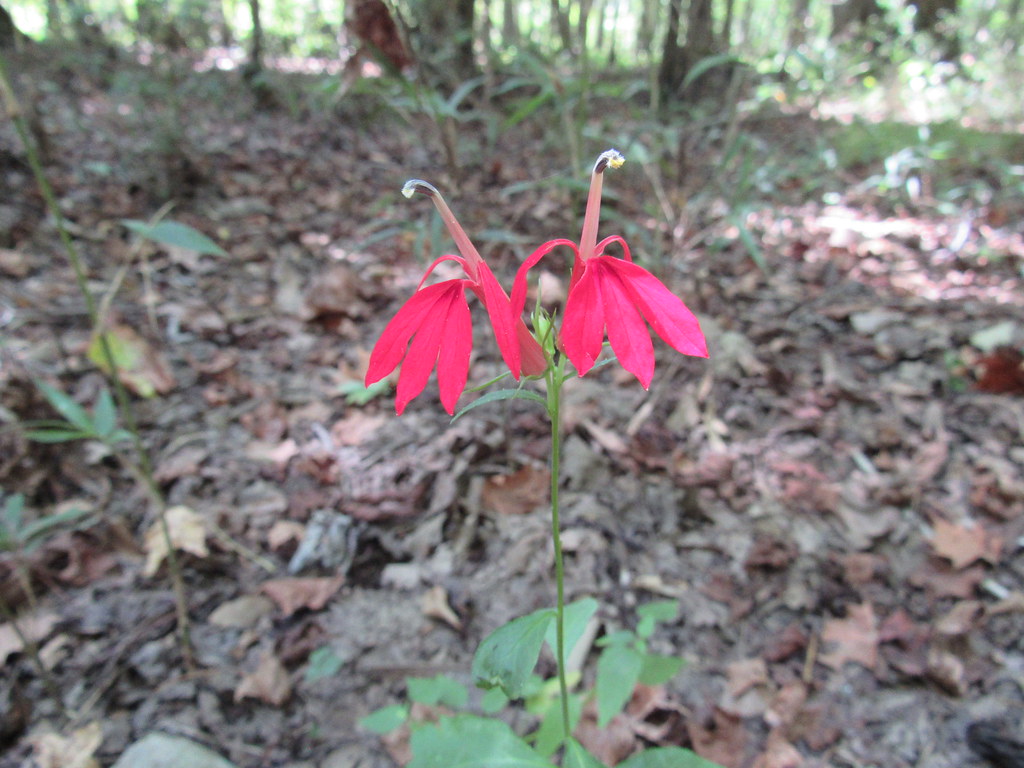 Cardinal Flower (Lobelia cardinalis) is fairly common in the swamp down here, though not forming pure stands of red flowers as it does in other parts of Illinois. 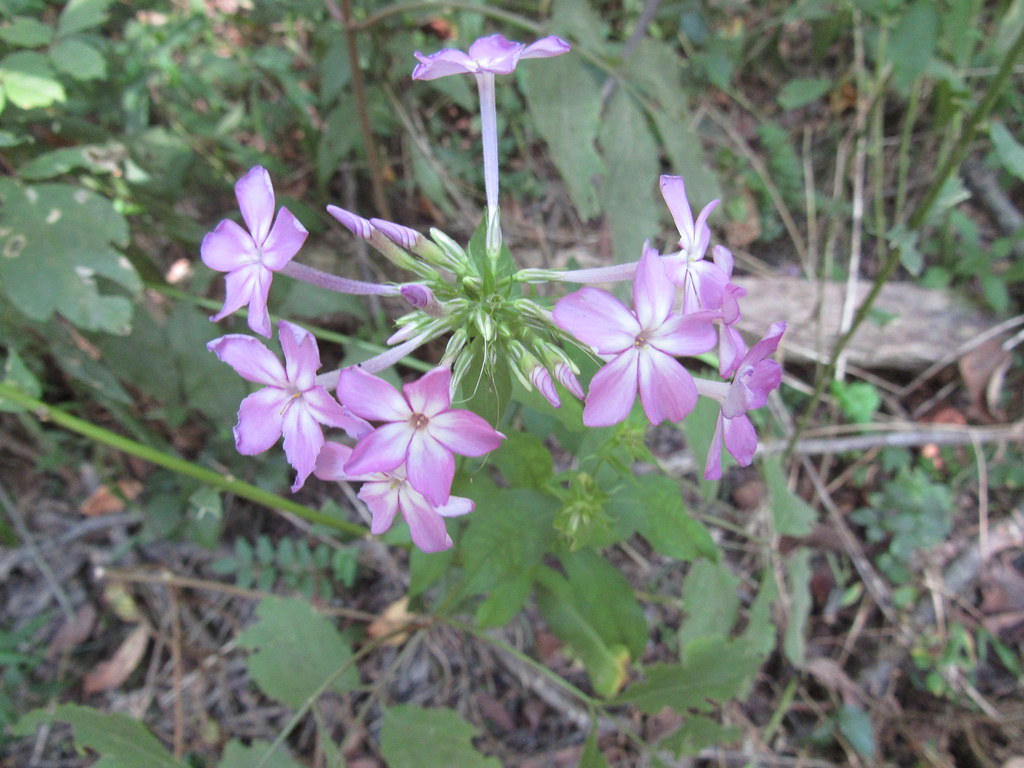 Wild Garden Phlox (Phlox paniculata) grew in a nearby parking lot, the last phlox of the year. 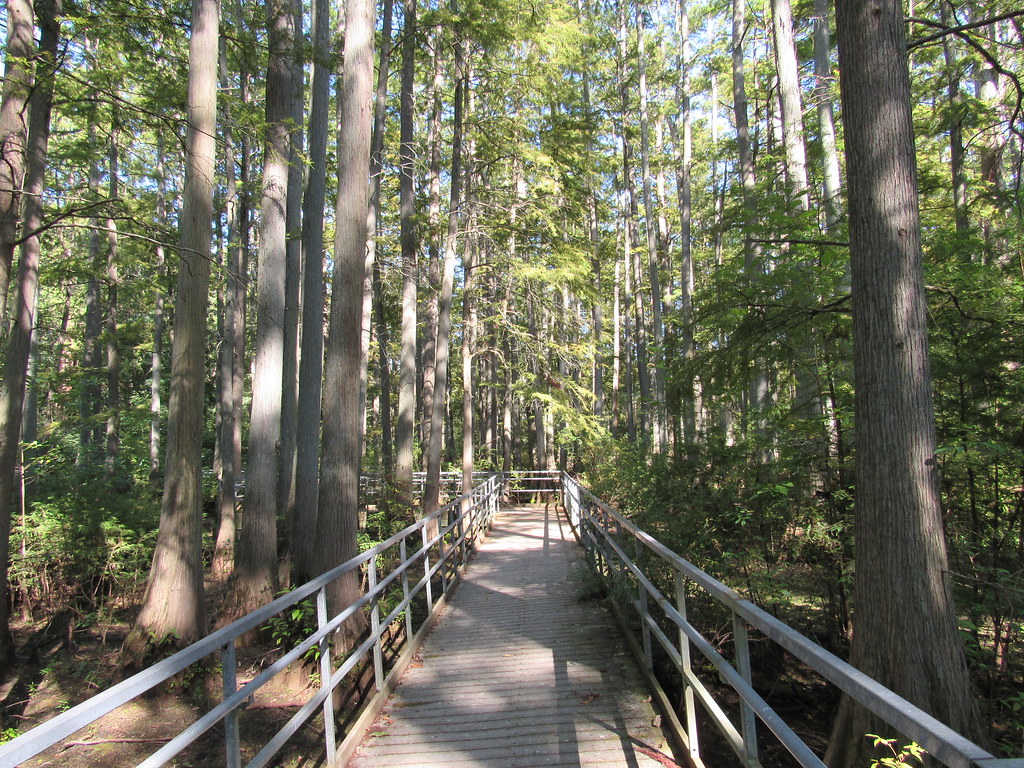 A  boardwalk ran through dried Heron Pond- the late summer has brought its usual drought, and the swamp was nothing but mud and tall trees. 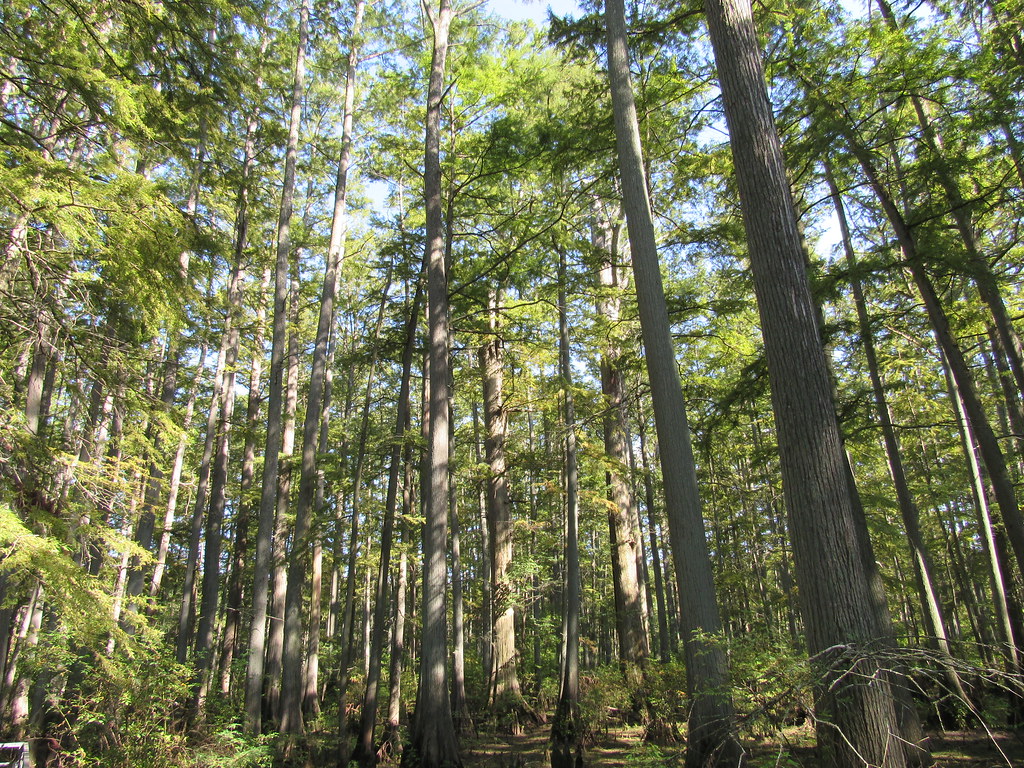 Baldcypress (Taxodium distichum) forests like this one are at the edge of their native range in southern Illinois.  While these aren’t the giant Baldcypress trees found in other parts of the Cache, I was impressed with this grove, the yellow-green needles like a forest of gold. 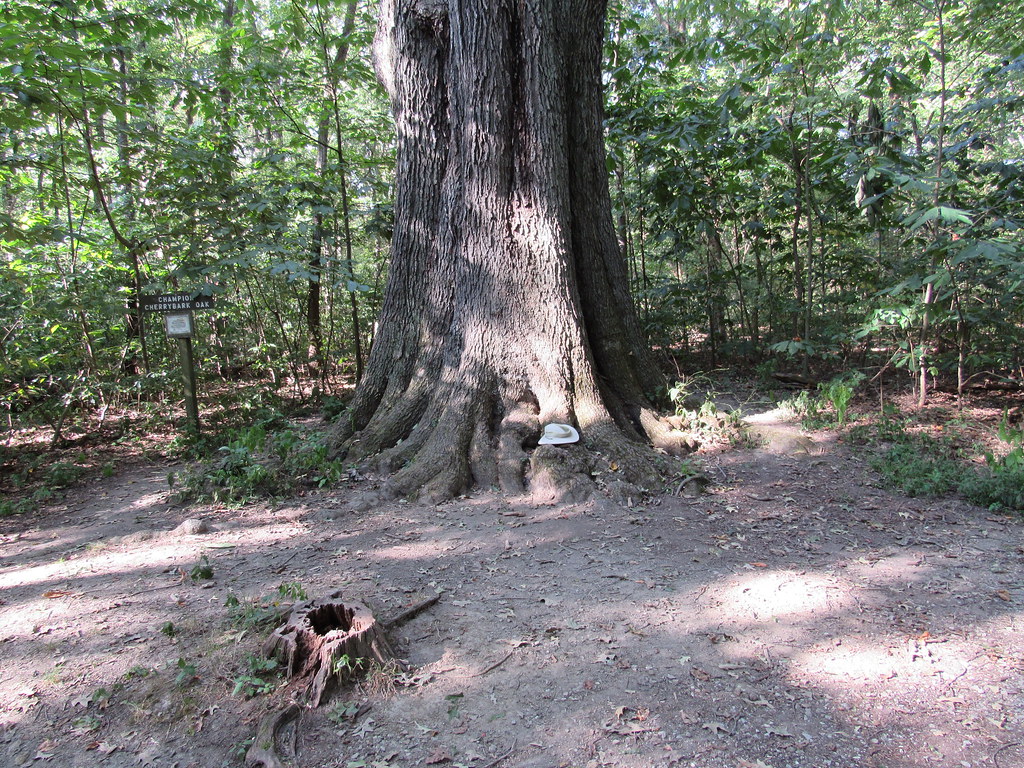 And here be giants.  This is the State Champion Cherrybark Oak (Quercus pagoda) tree- the biggest tree I’ve ever seen in Illinois!  Cherrybark Oaks, like Baldcypress, are Coastal Plain trees that swing north here in their distributions. 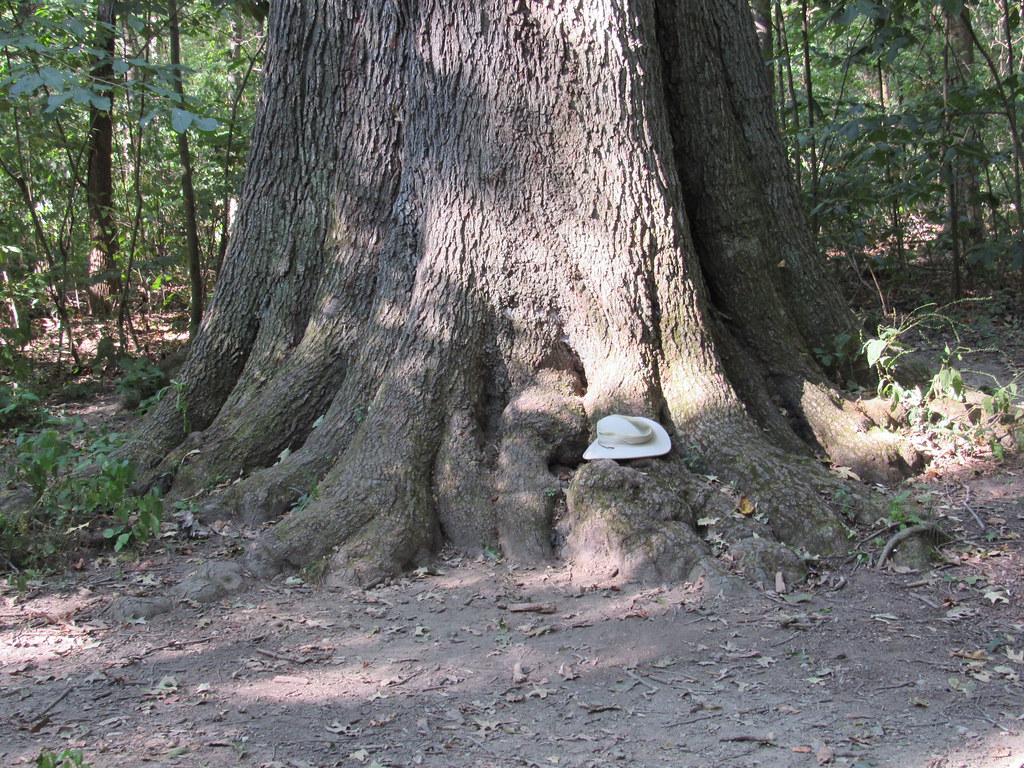 My hat is over a foot wide at the brim.  This is a massive tree. 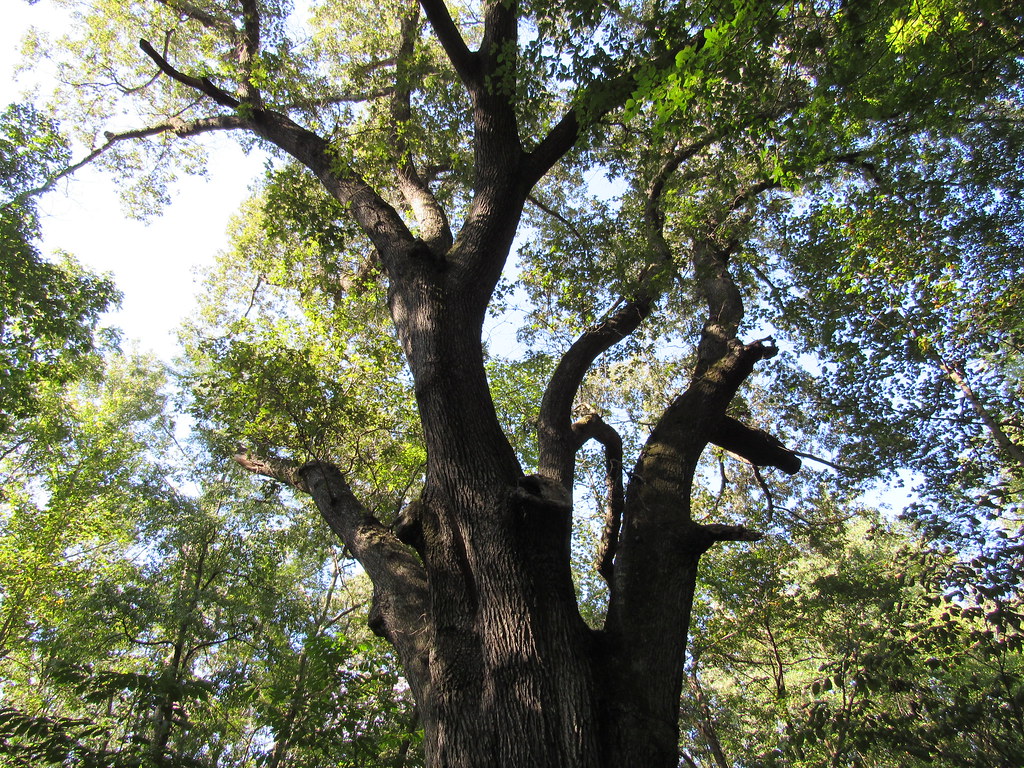 I then raced over to Cave Creek Glade, where IDNR had arranged a guided hike.  All four of us (one guide, three people) climbed up the steep glade (rocky, grassy slope surrounded by woodland). 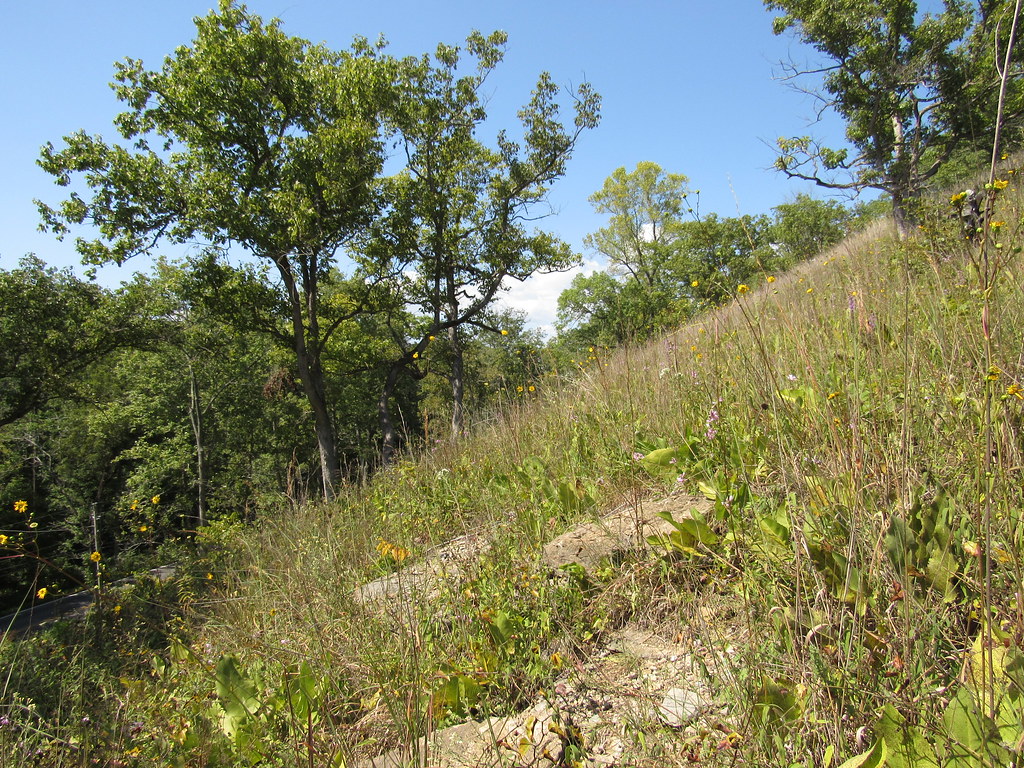 Cave Creek Glade Nature Preserve is one of the most well-preserved in Illinois. Regular fires and volunteer maintenance make for a plant community nearly-identical to that of Native American times.  I do find it funny how keeping an area “natural” involves so much work! 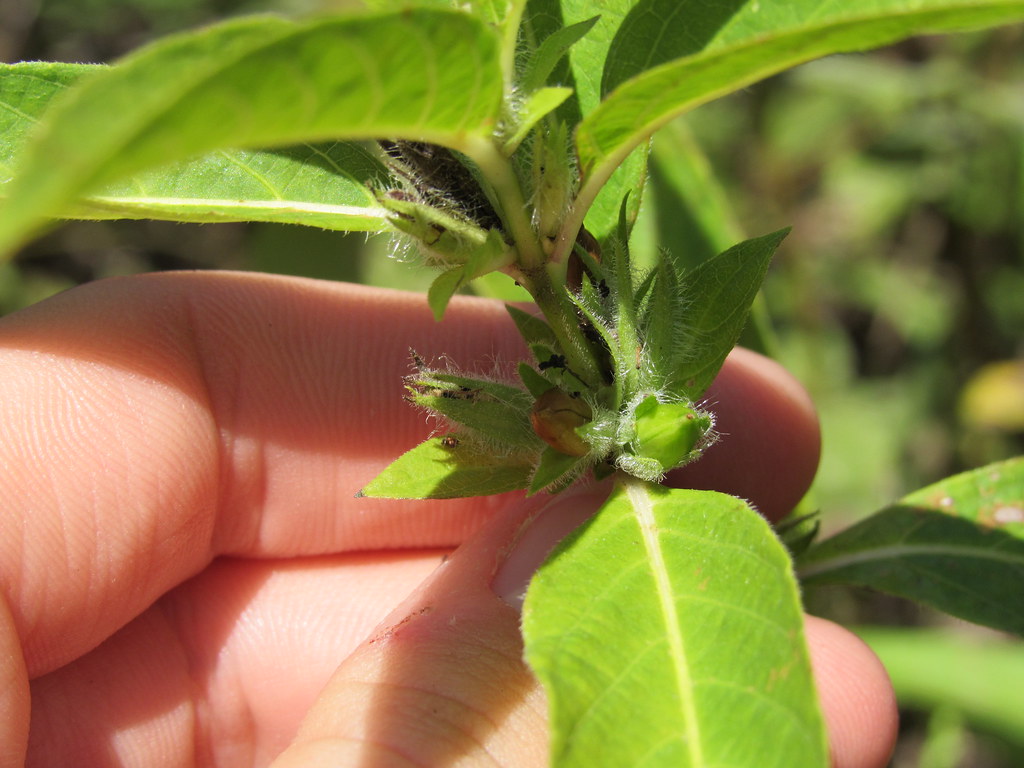 Yellow Horse-gentian (Triosteum angustifolium), with its axillary (between the leaves and main stem) flowers and seedpods, was a favorite of our guide’s for this unusual flower placement. 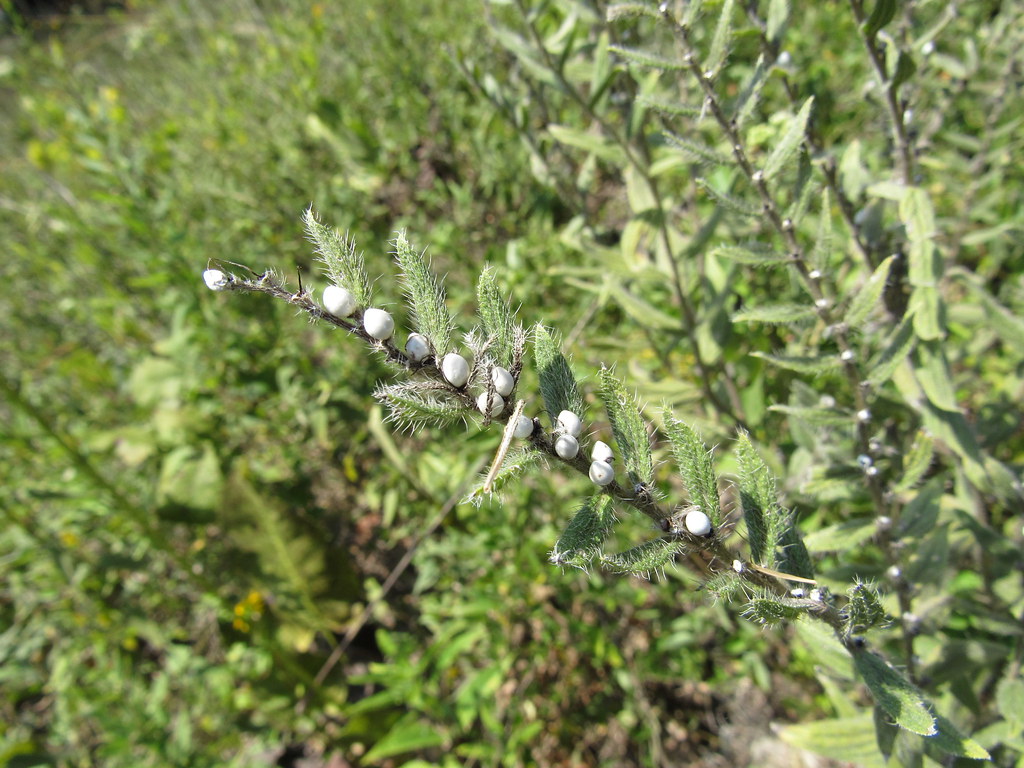 I think this is Eastern Marbleseed (Lithospermum parviflorum).  At any rate, it’s a Marbleseed.  The small, rock-hard white seeds provide the name for this plant. 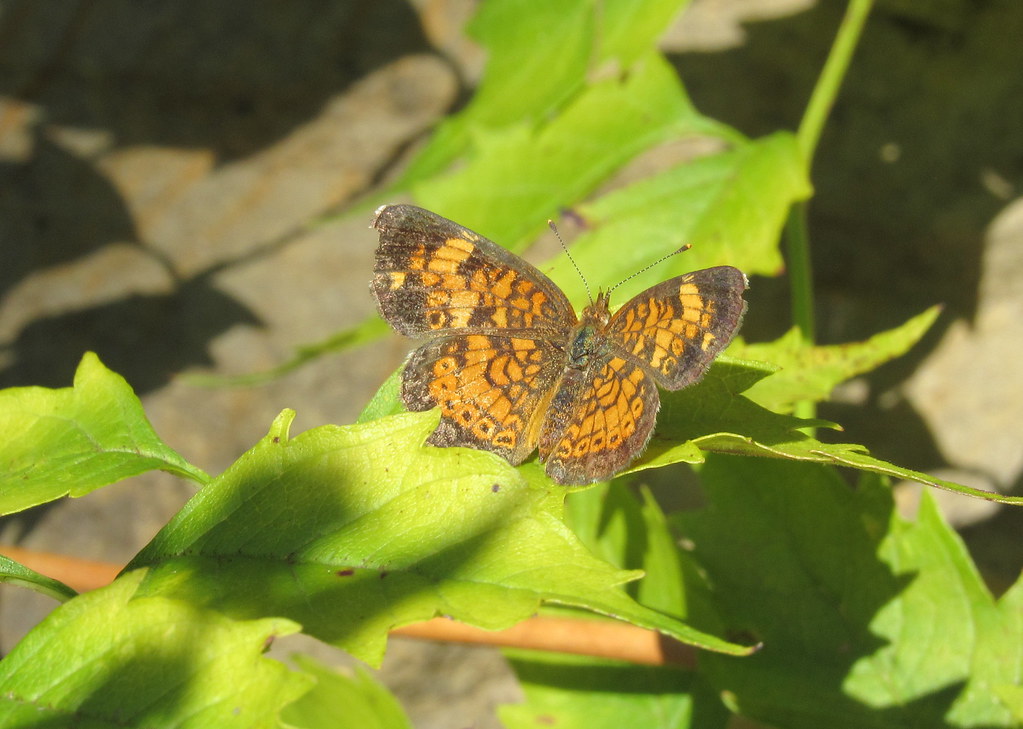 Pearl Crescent (Phyciodes tharos) butterflies live upon Asters.  They’re common favorites of mine, though I believe I saw more back home where Heath Asters are more common. 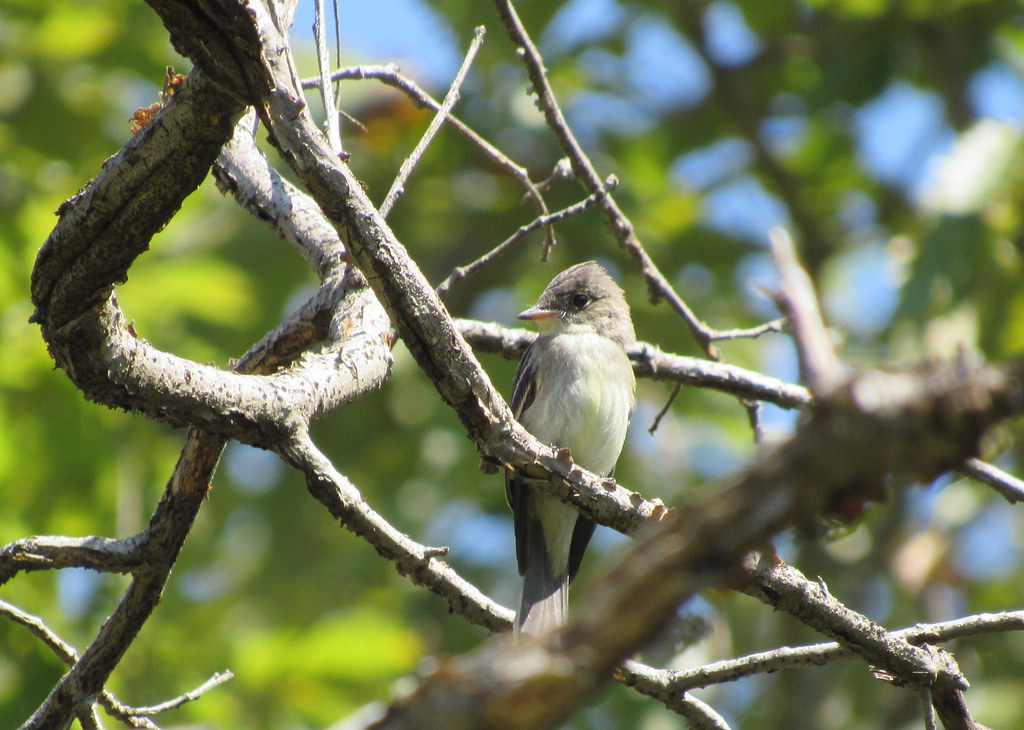 A Least Flycatcher (Empidonax minimus) sat in a tree. (If I’m obviously wrong, let me know, but the call sounded like it and it looked like one to the best of my limited ability to discern such things.  Empidonax flycatchers lead to ID anxiety for even the best birders.) 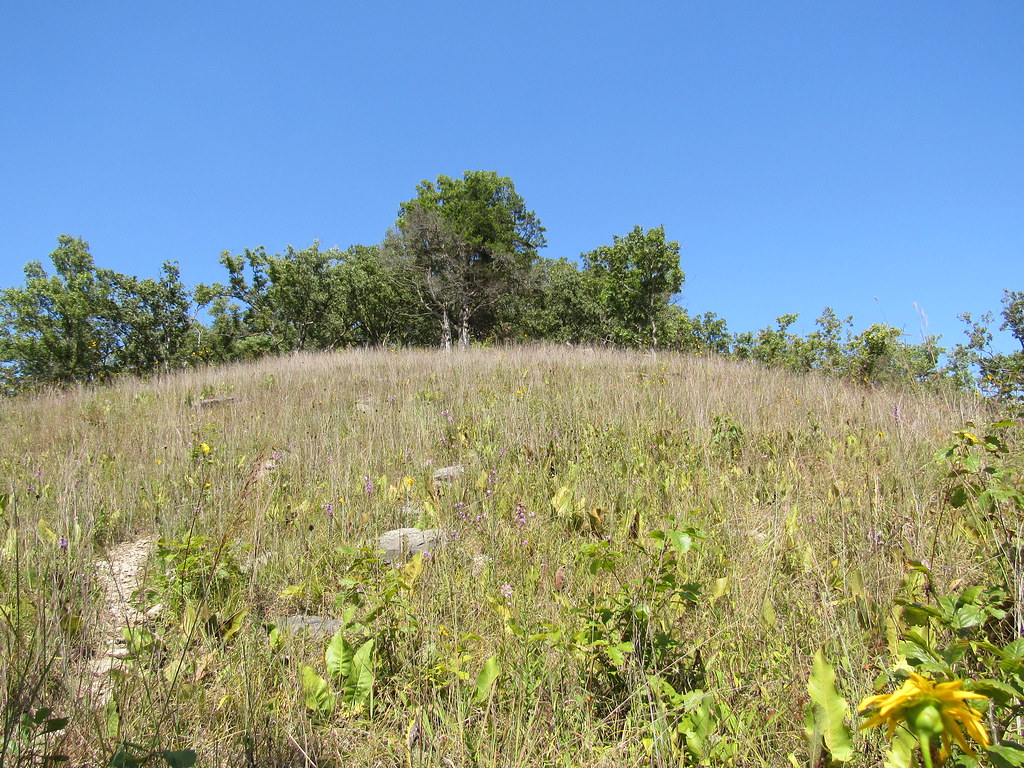 One of the most “natural” areas in Illinois, there’s virtually no non-native plants beyond a certain point on Cave Creek Glade.  This is one of the best-maintained natural areas in Illinois because of how uninvaded it is.  As Cave Creek Glade is a dry rocky hillside so hot that on an 80°F day,  no insects hid under its rocks, (I checked, hoping for the bizarre Vonones ornatus harvestmen), I suspect the conditions are too extreme for most  introduced, nonnative species. 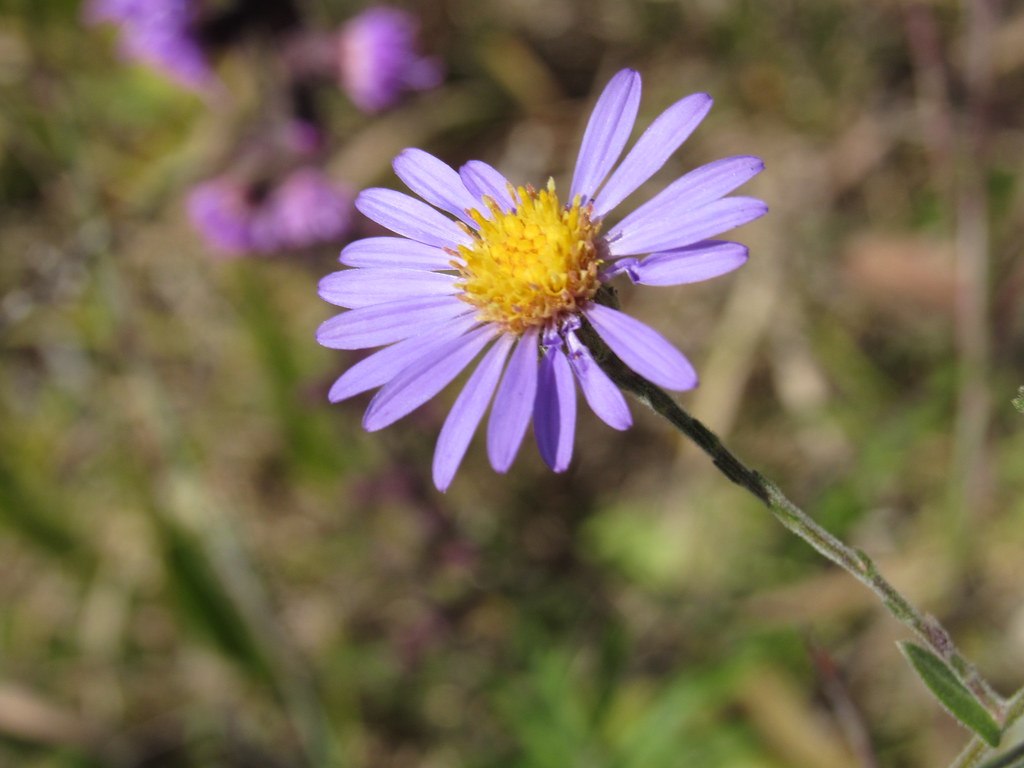 If I remember correctly, this is  Smooth Aster (Symphyotrichum laeve ). 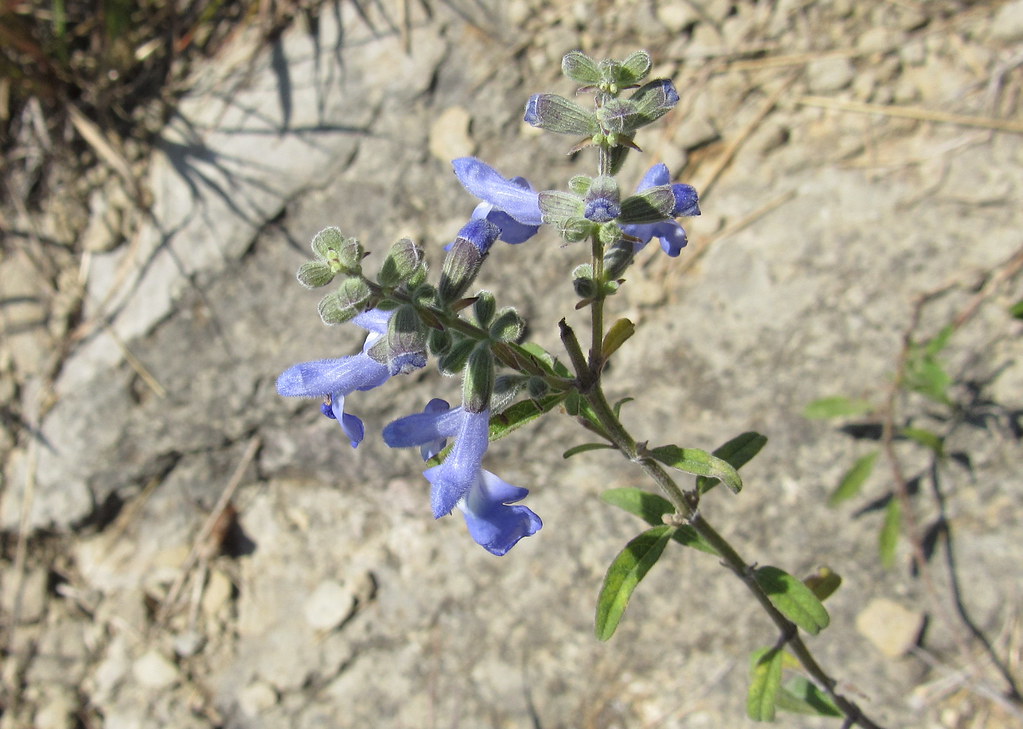 This Blue Sage (Salvia azurea) is a State-Threatened plant species restricted to far southern Illinois.  It grows more commonly in the southern Great Plains and the southeastern coastal plains.   This area’s Blue Sage are part of a disjunct population centered around far western Kentucky, and this is one of the few spots in Illinois where they are present. 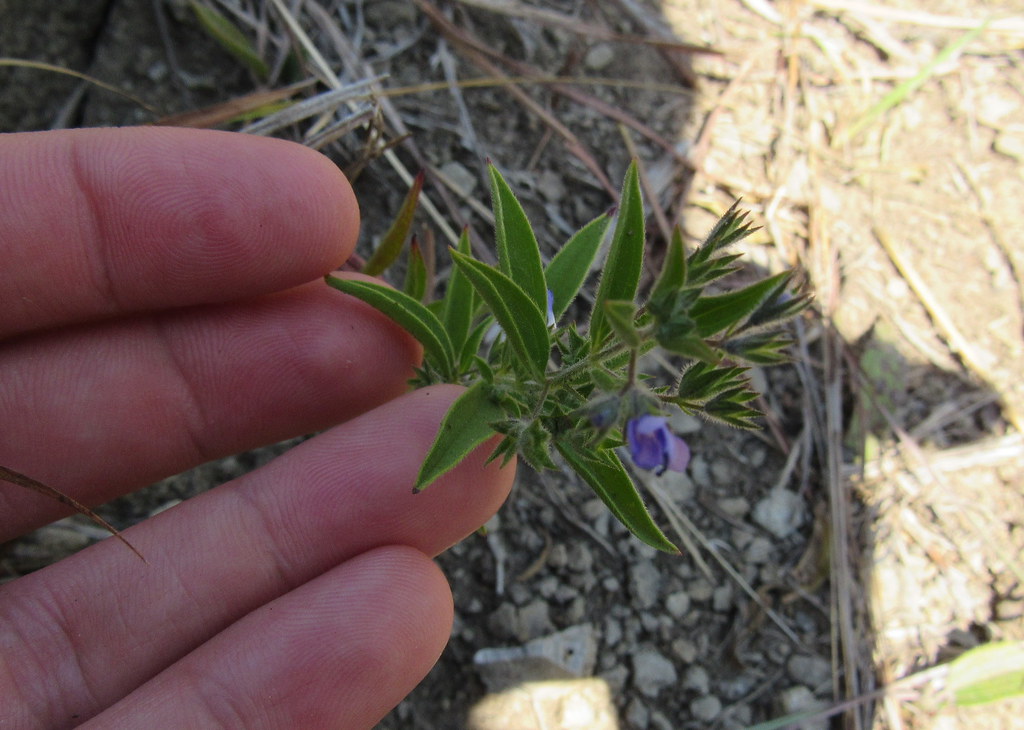 Another find was this odd small-flowered plant with blue flowers.  I believe it’s Fluxweed (Trichostema brachiatum), after some internet research. 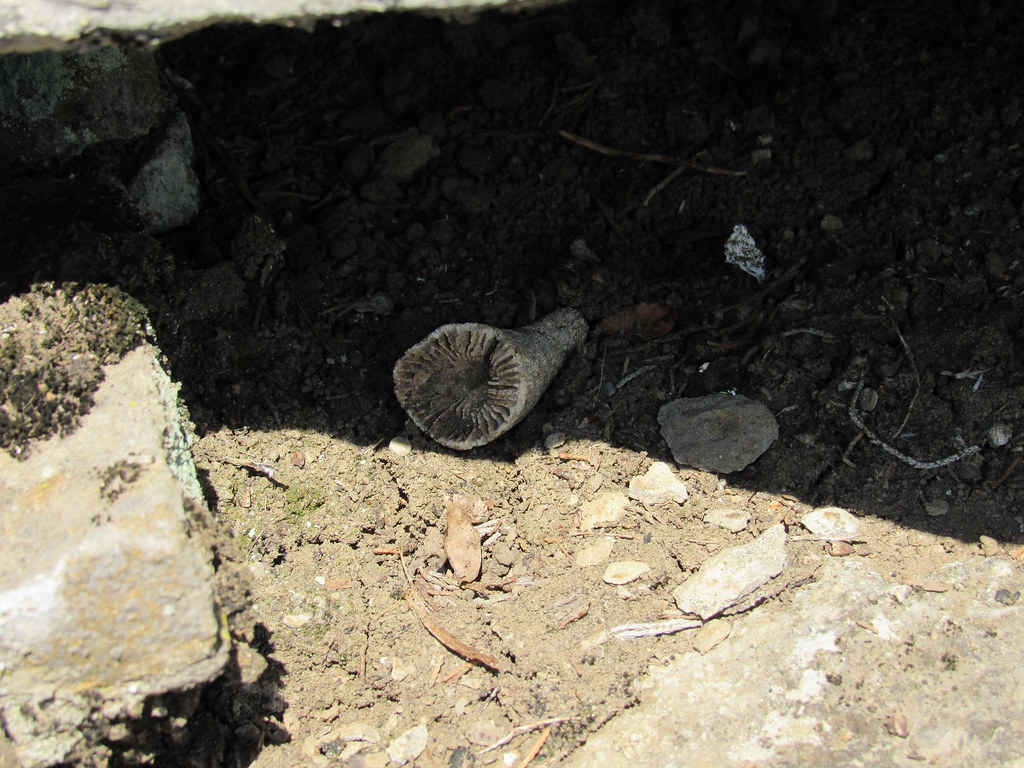 Crinoid  and brachiopod fossils could be found in some of the limestone rocks of which the glade was composed.  However, as this is an Illinois Nature Preserve, there is NO collecting of any fossils here. If you visit and you find fossils here, please leave them for other people to enjoy, or else you are actually breaking the law.  That being said, I’d never considered fossil-hunting in Southern Illinois as something I could potentially do in areas where this is permitted. 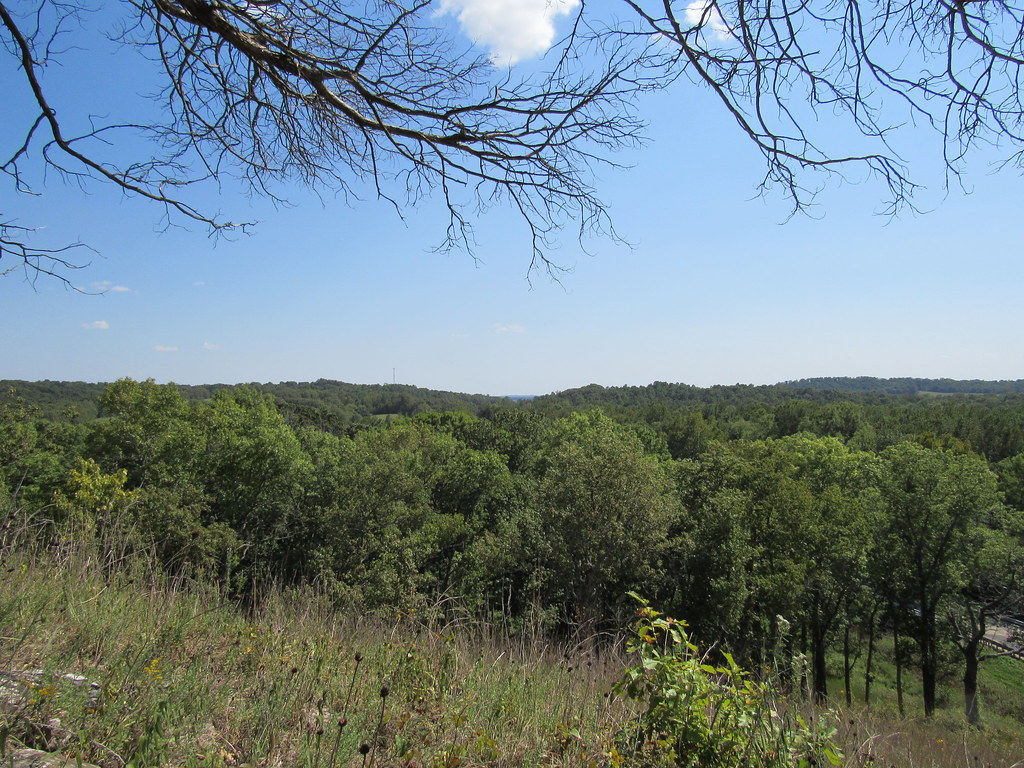 The views from Cave Creek Glade were something we could take home, in the form of pictures and memories.  In a month or less, this will be a spectacular place for fall colors. 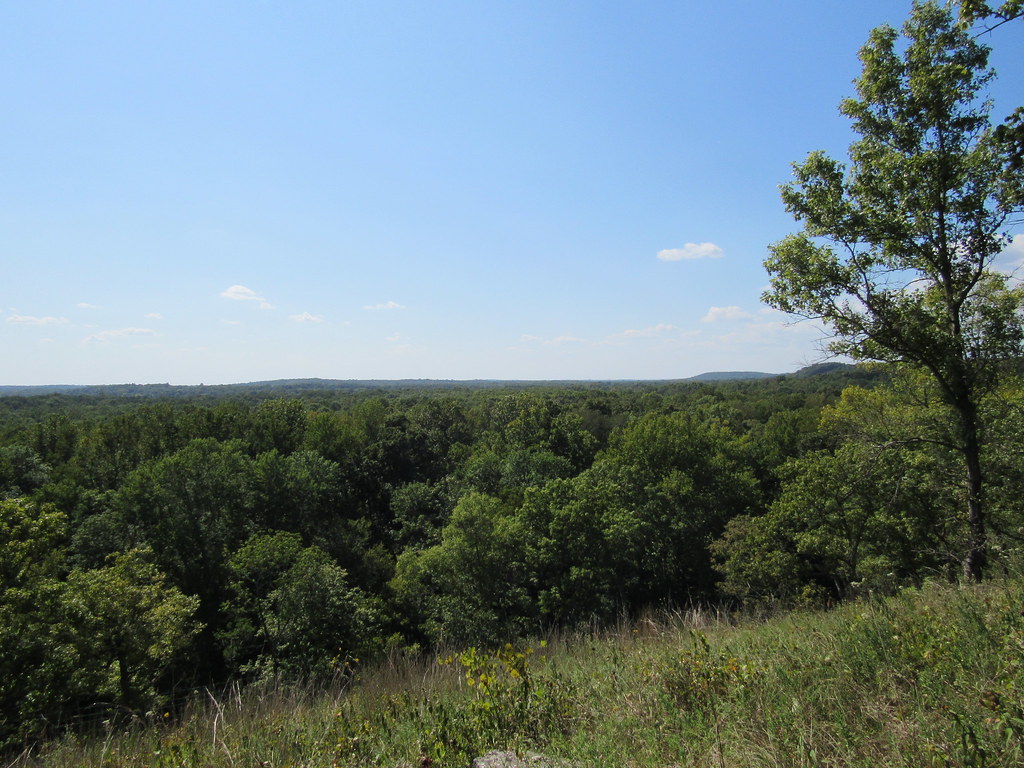 Meanwhile, in the vicinity of these areas, on a trail, I spotted this Cottonmouth crossing.  A family with their three kids and dog came along, as did one of the people from the Cave Creek Glade hike.  The Cottonmouth lazily got out of their way as they passed along the side of the trail behind it and well out of the strike range (half the snakes body length). Cottonmouths are not aggressive, but there’s no sense in getting too close to a venomous snake.  The snake departed into the woods, evidently disdaining the sudden amount of traffic on its quiet path. 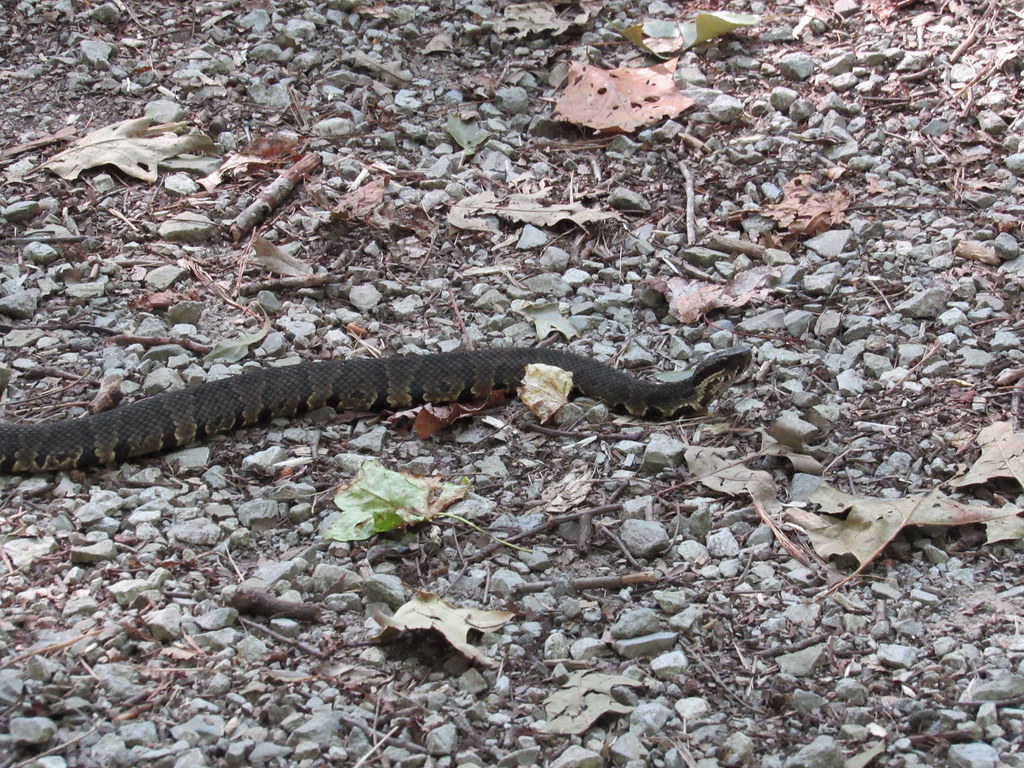 While I didn’t see much more of the Cache than this, I enjoyed what I got to see, and there will be many more visits in the future.  The largest and oldest tree in Illinois, a Baldcypress, grows in this area- and I plan to make a trip back to find it sometime soon! 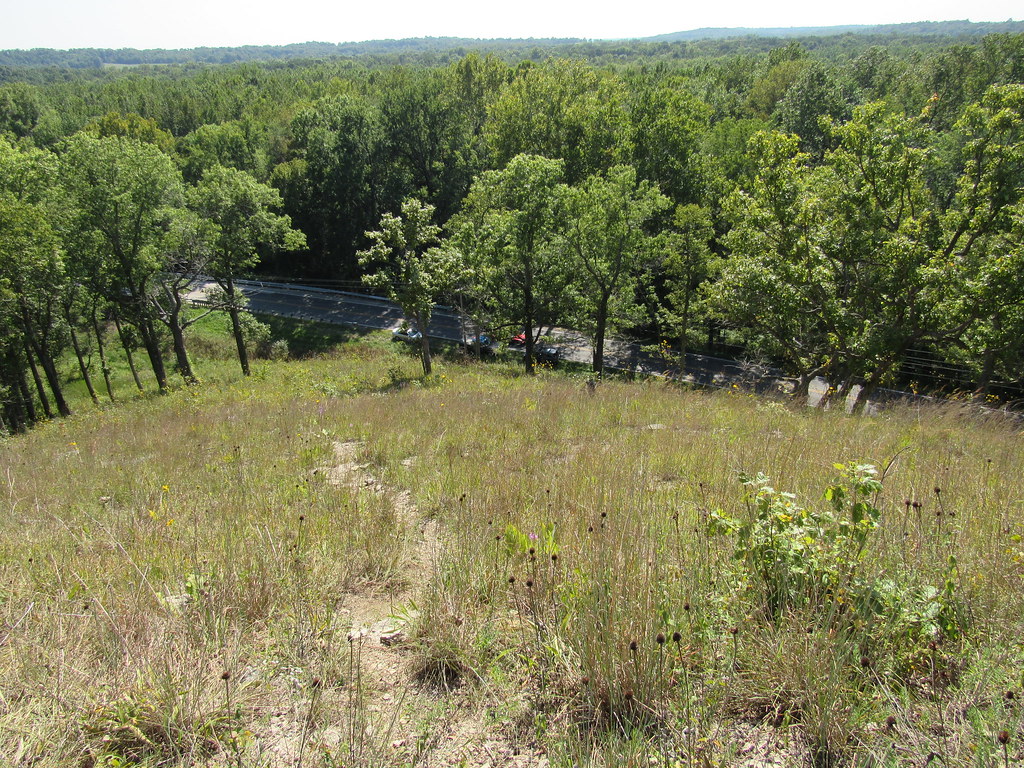