So, my snake luck has been rather- well, I’ve seen a lot of snakes lately.   Part of this has to do with Snake Road.  Part of it is just my extreme luck at this time of year.  First, it was  this, sticking up out of the grass along a road in the Shawnee National Forest as I drove by: 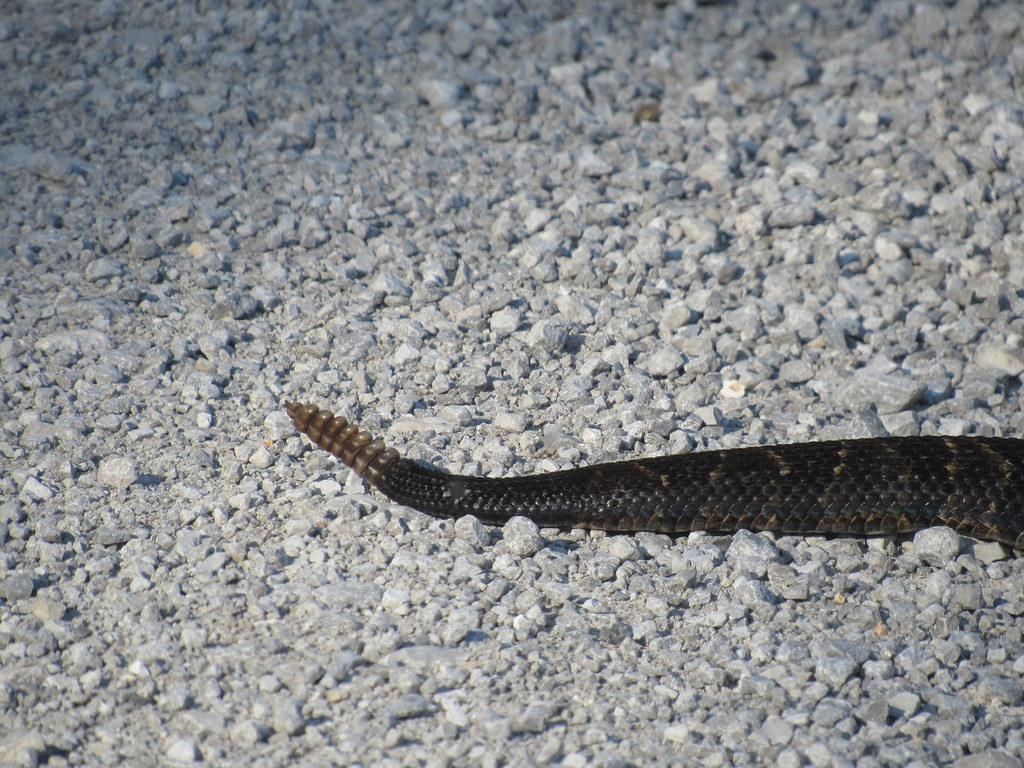 This morphed into a lifer, two-foot long Timber Rattlesnake (Crotalus horridus), a State-Threatened species and the third venomous snake species I’ve found this year- just sitting in the grass on the side of a random road.  I maintained a safe distance- this is the most venomous of Illinois’ snakes, albeit also the least likely to bite a human in Illinois. 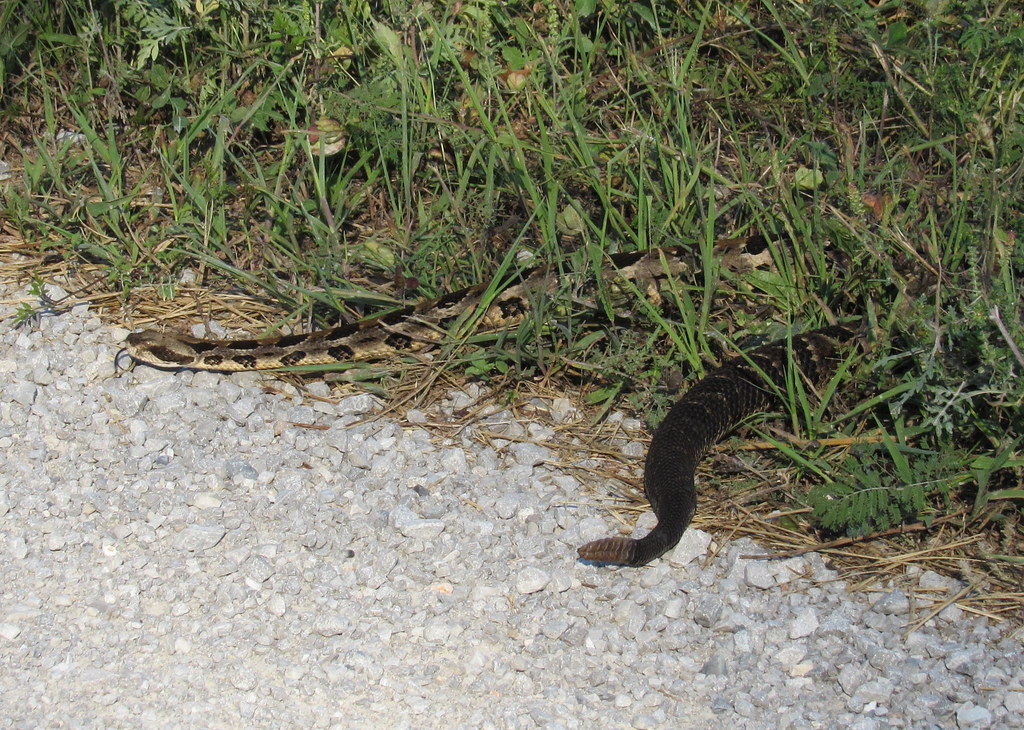 Timber Rattlesnakes can grow to about double this length or more.  Snakes never stop growing- they just usually die at about a certain length.  They do slow down once they reach maturity. 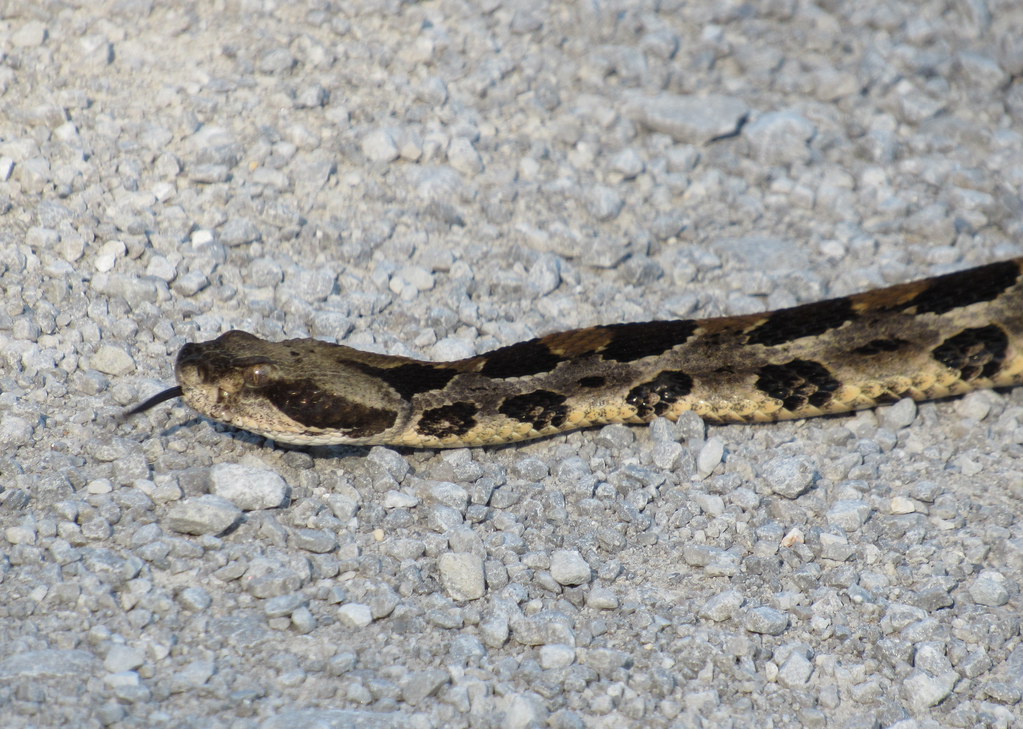 I took a video as the snake crossed back into the woods to get away from me.  The battery of my camera ran out as I took the video, but I still managed a decent clip: 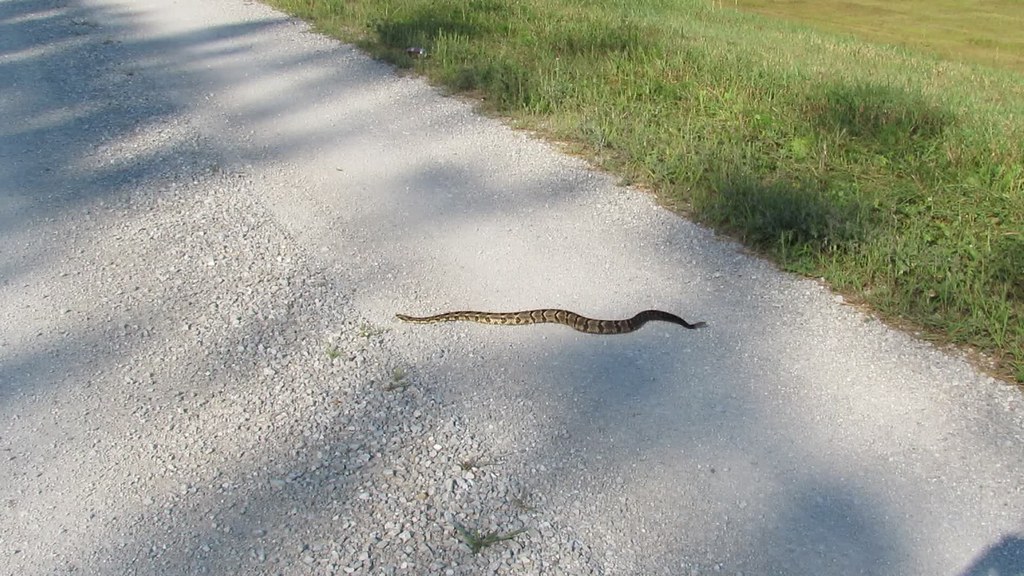 While off and about, I also discovered this skink, probably a Five-lined Skink (Plestiodon fasciatus), on a rock ledge.  I’m still not used to just finding lizards while hiking. 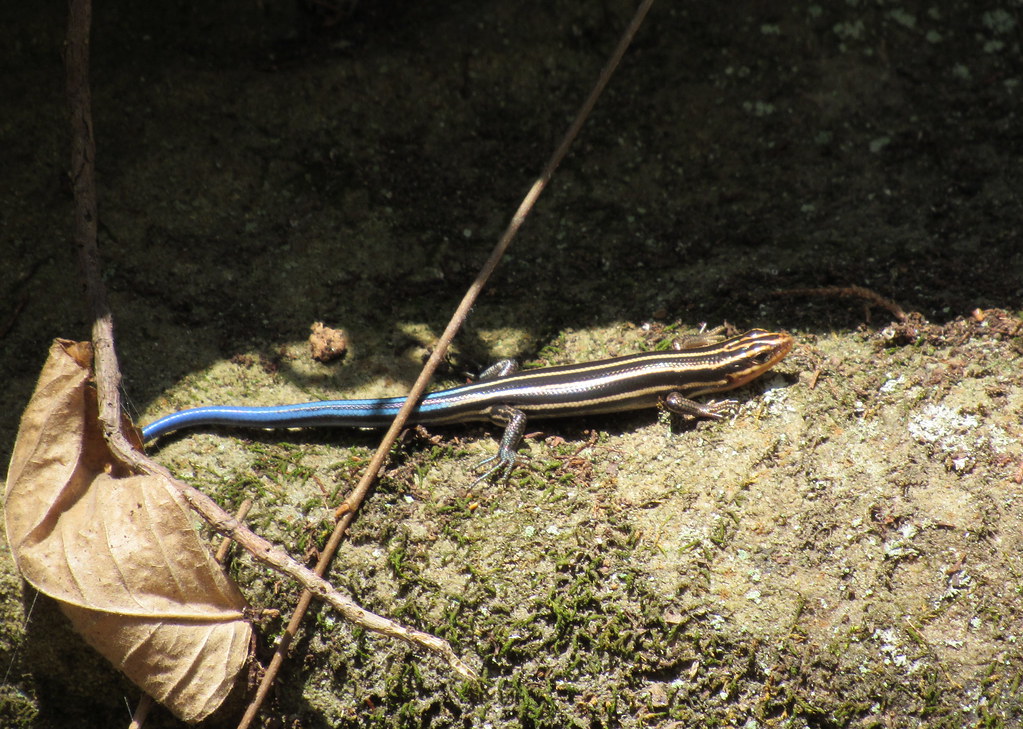 Not far from it,  someone I was hiking with found an Eastern Box Turtle (Terrapene carolina) in the undergrowth.  They are quite active this time of year, looking to build up food reserves before winter.  One sign of their existence is triangle gaps bitten off a mushroom, though a Box Turtle will eat a wide variety of food, including mushrooms, leaves, berries, insects, worms, and even carrion.  One Box Turtle even ate a live bird that was trapped in a banding net! 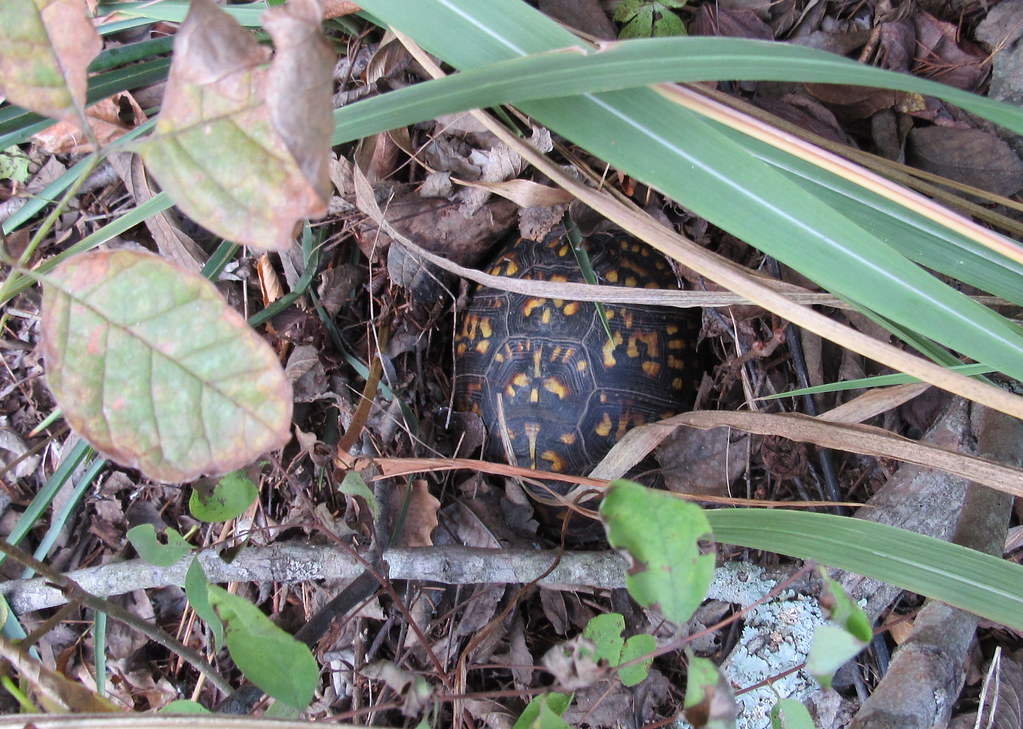 We took it out for a brief look before replacing it in the undergrowth where we found it: 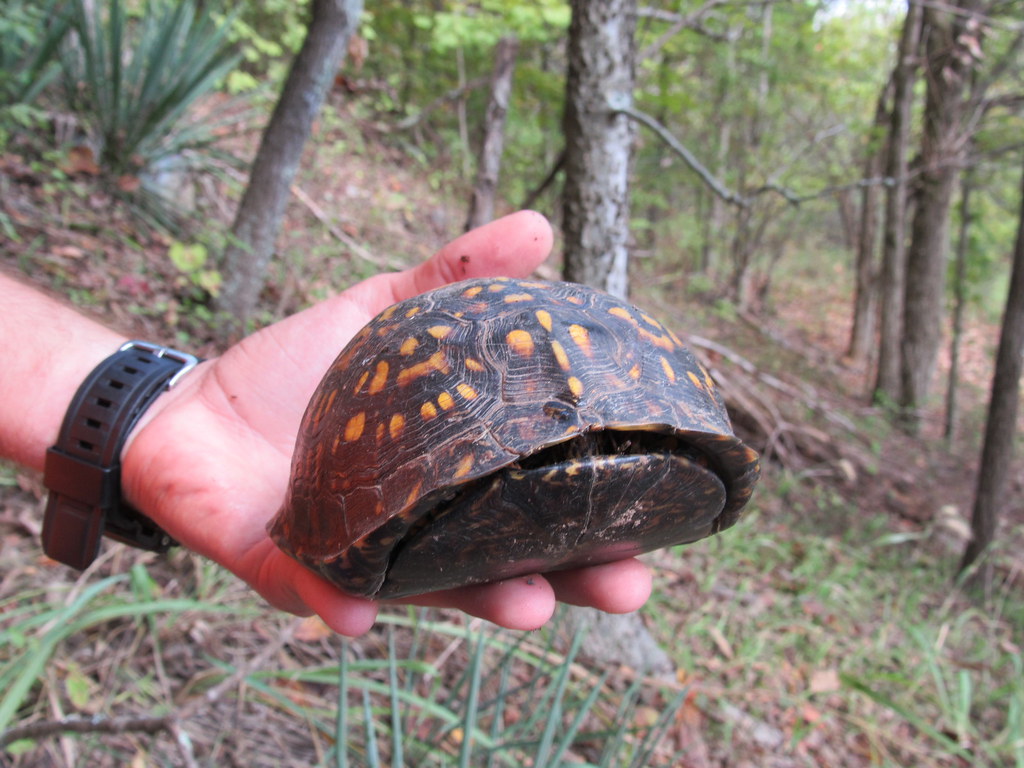 After this, I wandered over to Grand Tower Island for some birds: 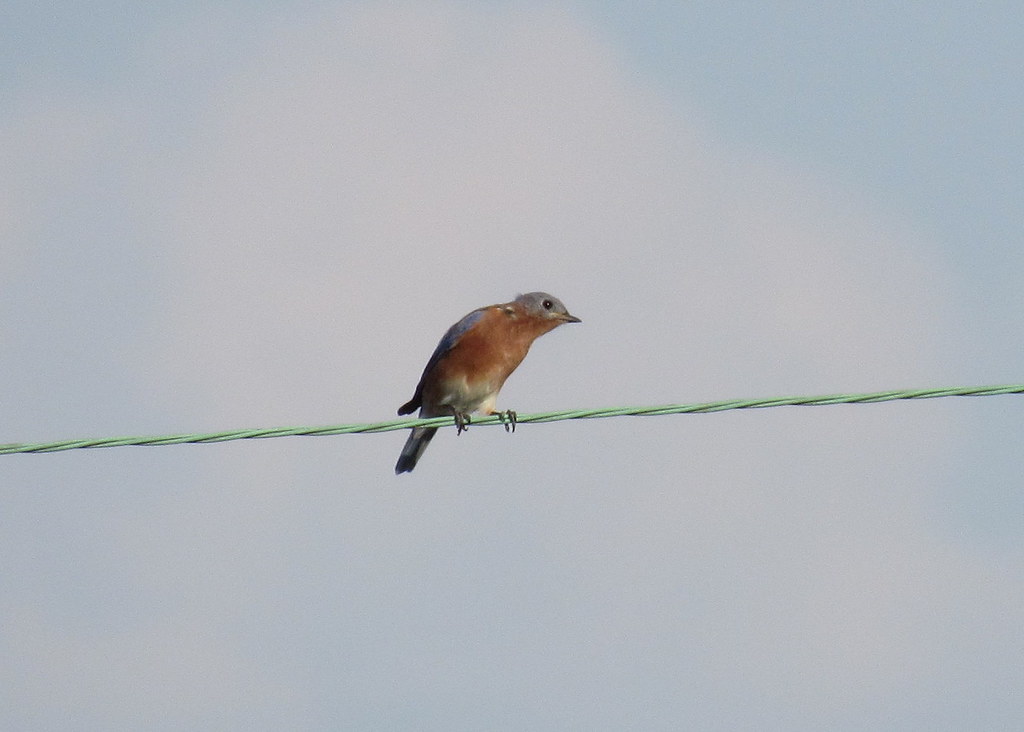 Eastern Bluebirds (Sialia sialis) have begun to appear widely. I suspect these are migrants. 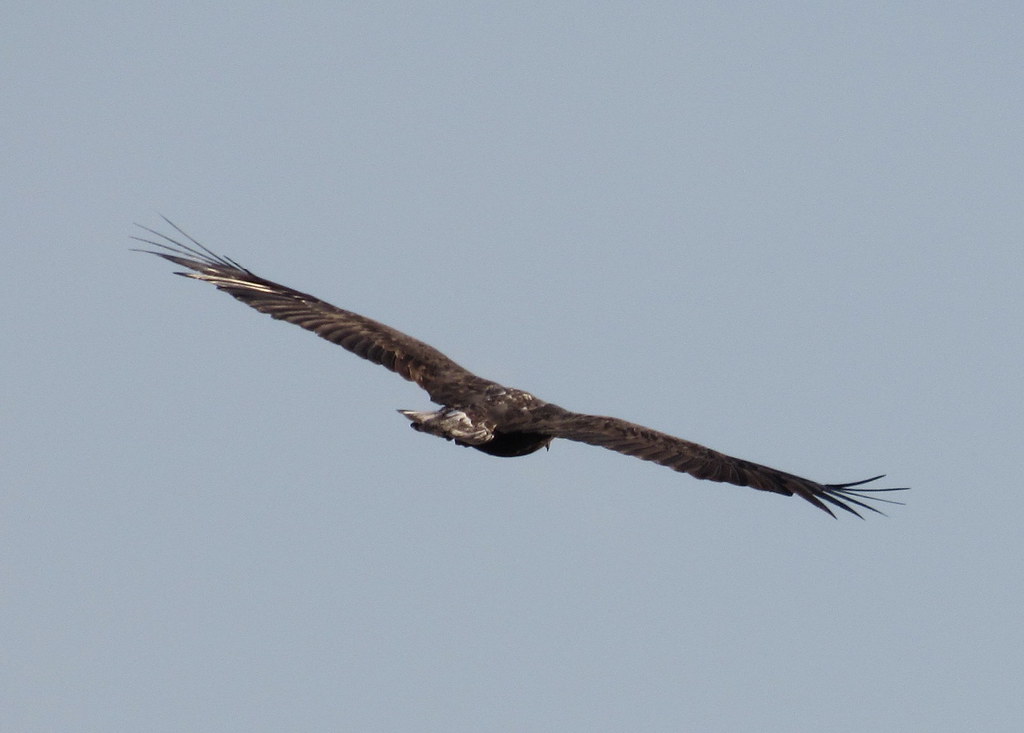 Immature Bald Eagles  (Haliaeetus leucocephalus) cruised overhead, though the mature bird seems to have left for other waters.  This individual is growing some white in the tail. 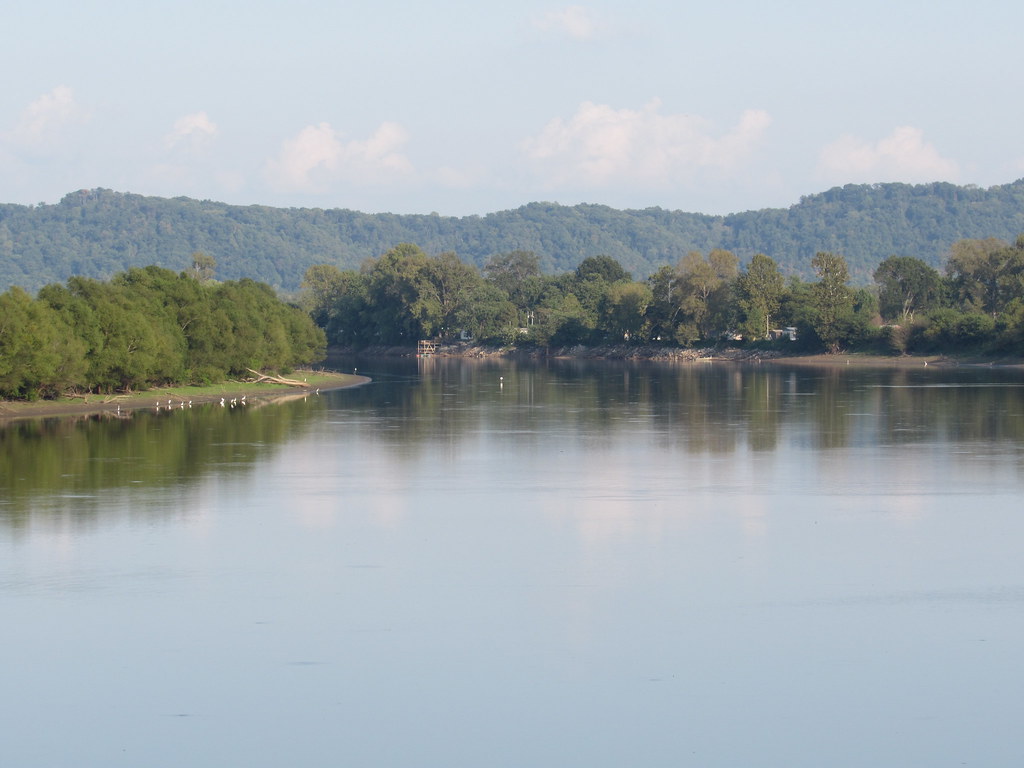 Hundreds of Great Egrets (Ardea alba) have congregated here of late.  While not a rare bird, seeing more than a hundred of such a large species is always an impressive sight! I suspect this is a staging sight (a spot where migrants gather to form into flocks), or perhaps just a stopover site for food and shelter as the egrets migrate southwards. 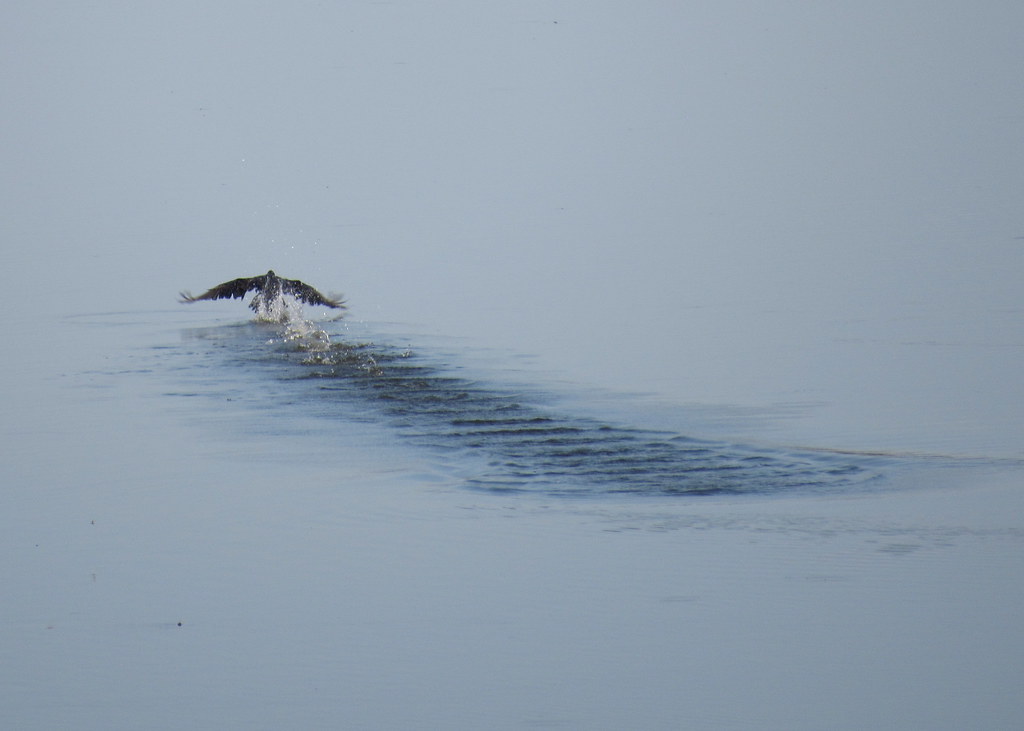 Double-crested Cormorants (Phalacrocorax auritus) have declined in number, however as the fish population has died off in the drying sloughs nearby..  This one decided to fly off. 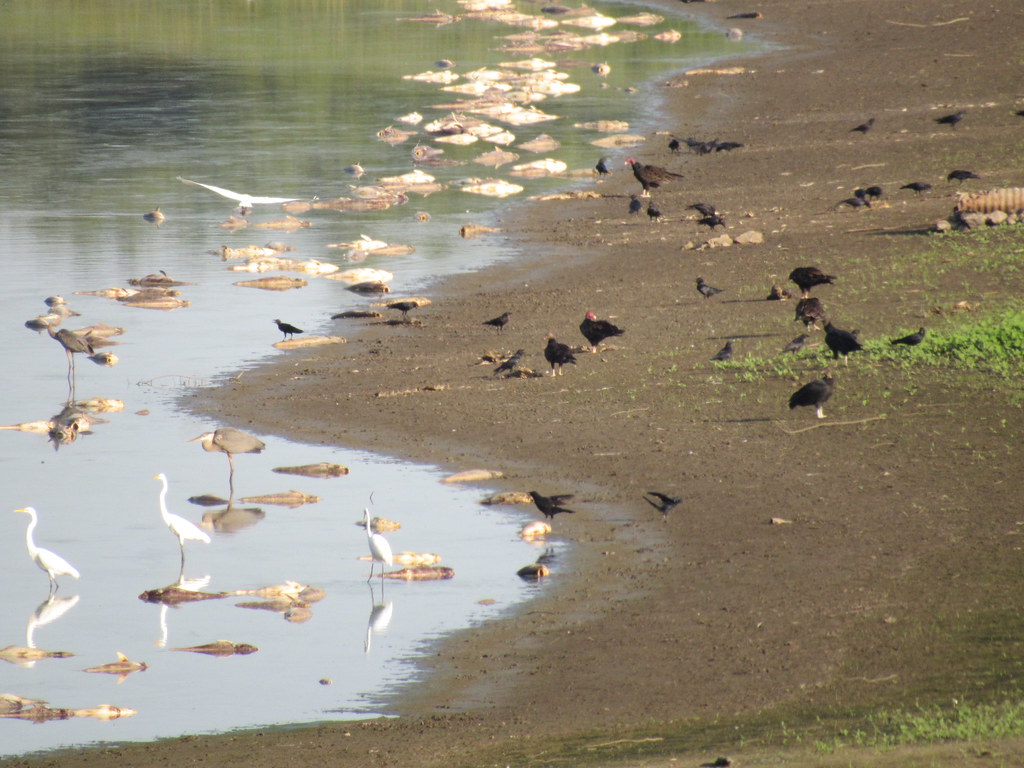 Several Turkey Vultures (Cathartes aura) and Black Vultures (Coragyps atratus), along with hundreds of Fish Crows (Corvus ossifragus), congregated to eat dead fish.   The sloughs here are filled with Asian carp (Hypophthalmichthys spp.) that died as the water quality and food supply dwindled out.  It reeks, and it also attracts plenty of wildlife… 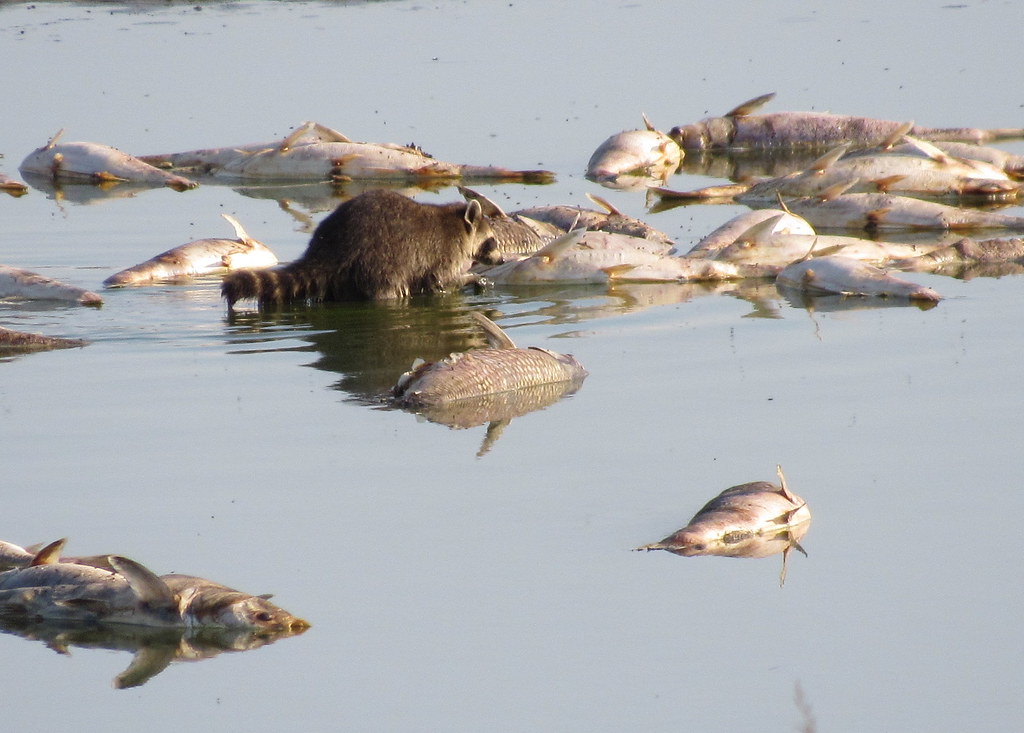 Raccoons (Procyon lotor)  seem to be considerably more abundant in these lowlands than I am used to.  Perhaps they’re just more diurnal in the absence of humans.  Either way, I saw this one well before sunset, having a nice meal of rotting fish.  I’ve named it Smeagol. 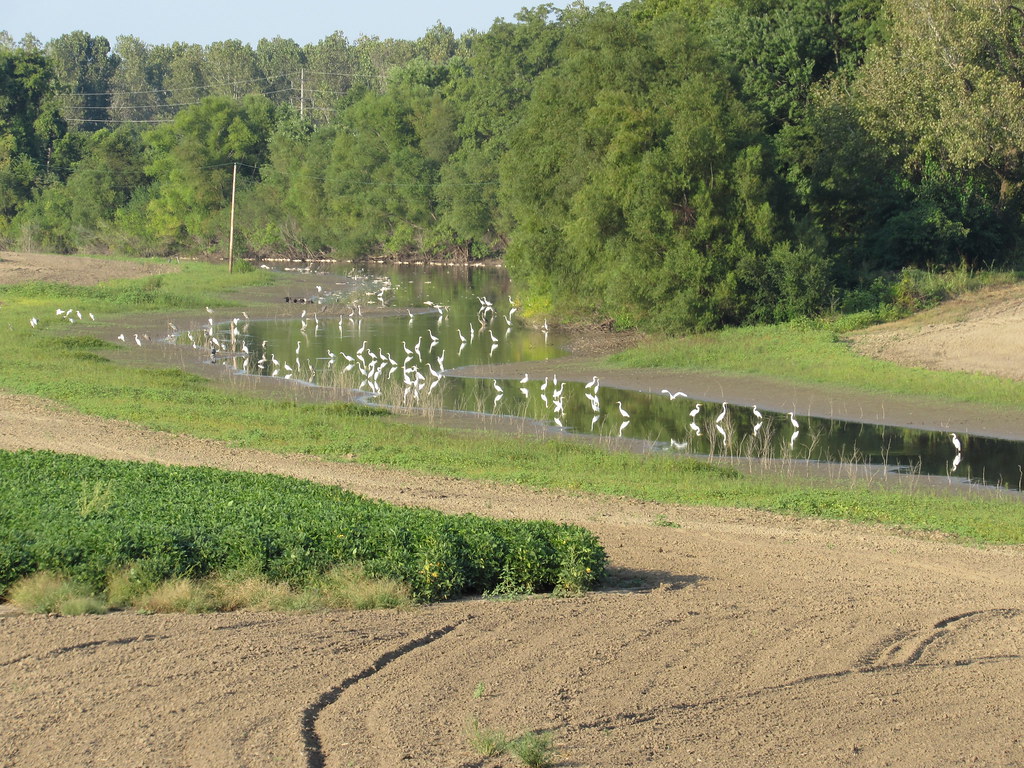 Did I mention there were hundreds of Great Egrets? 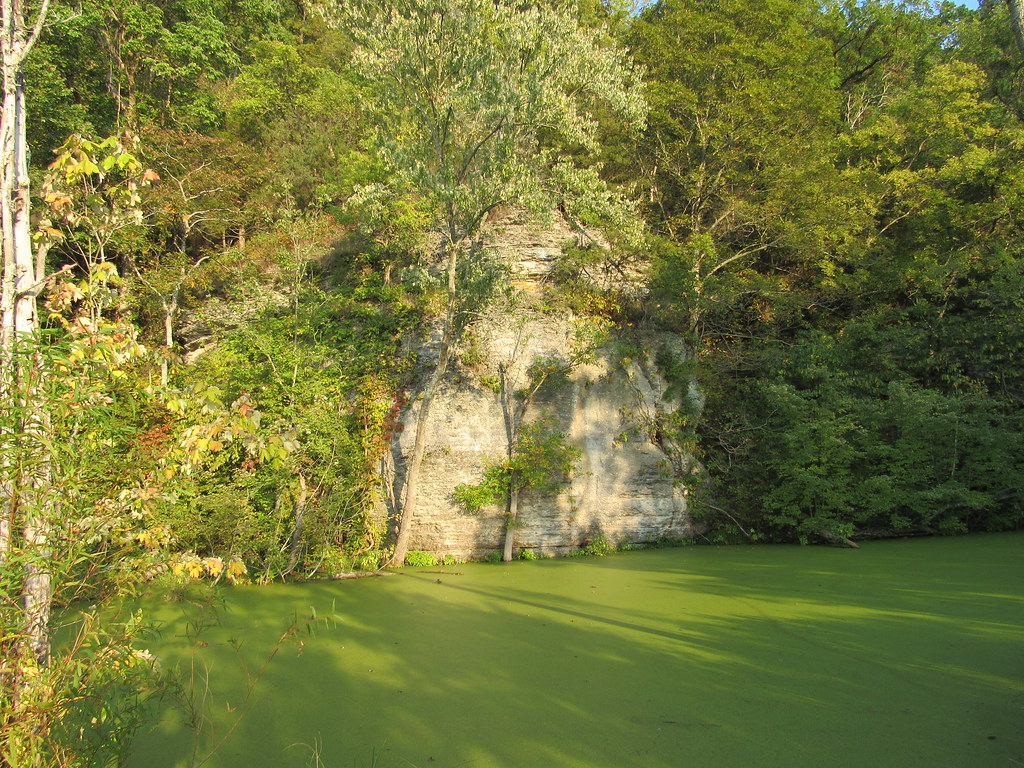 I then went over to Snake Road, a road closed twice a year for snake migration.  I’ve talked about it before, but to recap- snakes live in the swamp on one side of the road, and hibernate in the cliffs on the other side of the road.  They cross over the road in great numbers in spring and fall to get wherever it is they want to be for the next season.  Occasionally, there’s water on both sides of the road, as seen above, but for the most part, a strip of woodland accompanies the roadside. 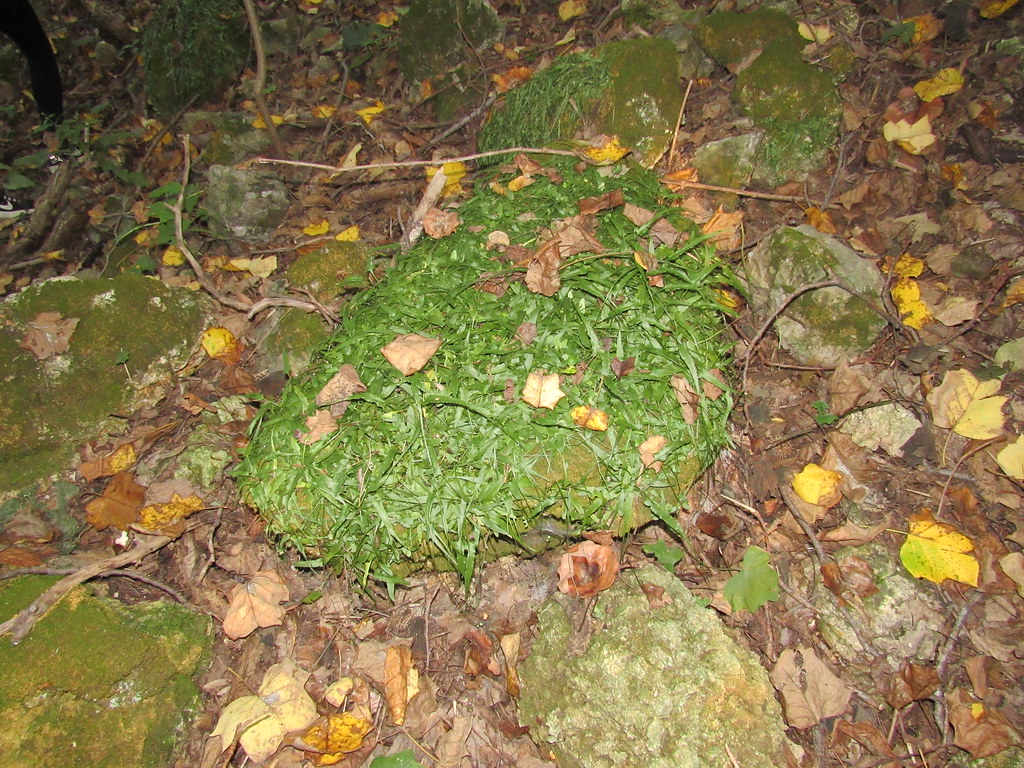 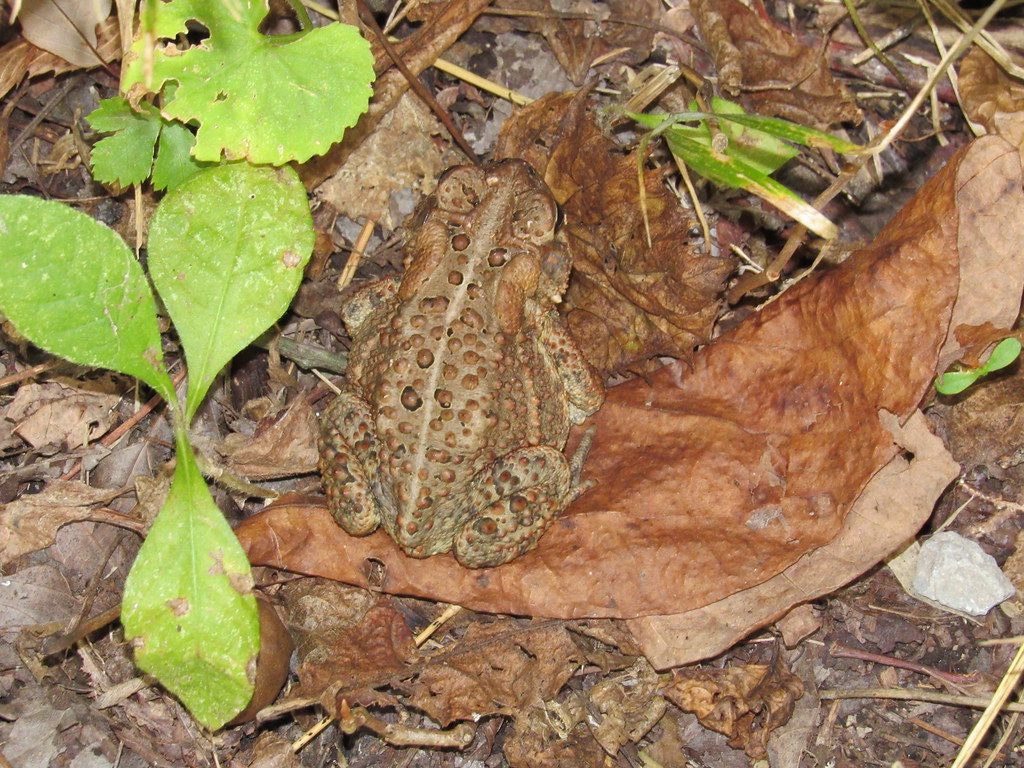 A large American Toad (Anaxyrus americanus) hopped along, oblivious to any potential dangers… 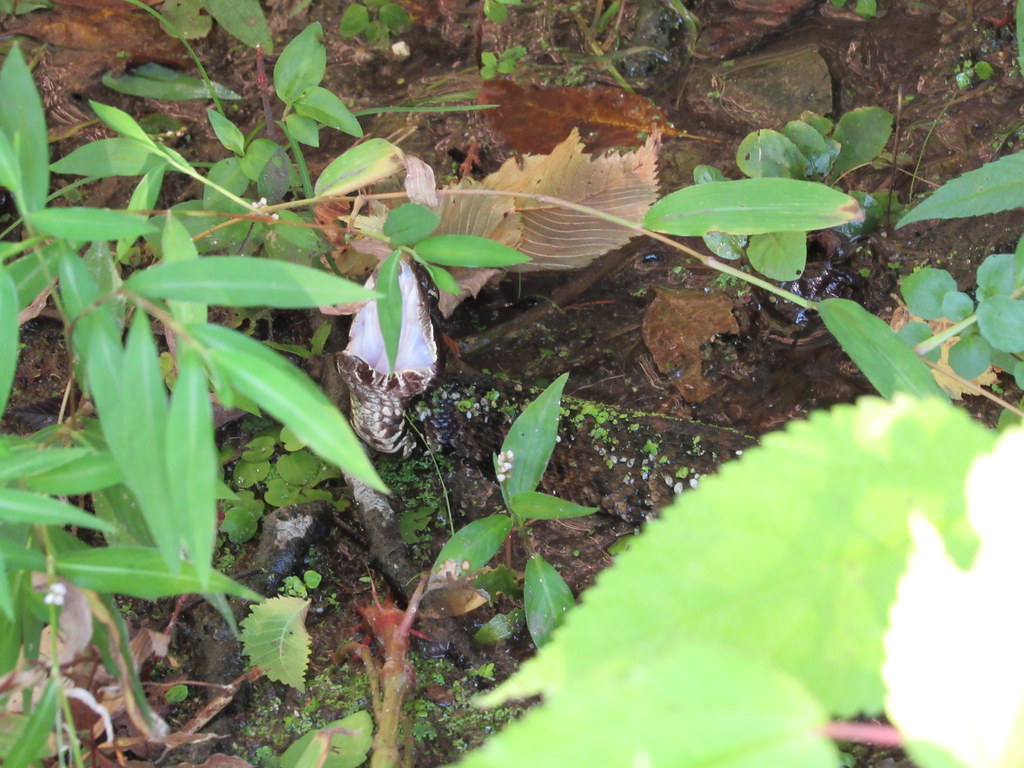 I was not.  Someone had messed with a couple of the Cottonmouths (Agkistrodon piscivorus) on Snake Road, and as a result they immediately went into defensive mode.  This involves a lot of gaping and tail-shaking, as if it wanted to be a rattlesnake.  Many of Illinois’ snakes shake their tails in defensive postures- I presume as a way of imitating rattlesnakes.  However, Cottonmouths are plenty dangerous enough on their own- they don’t need to pretend! 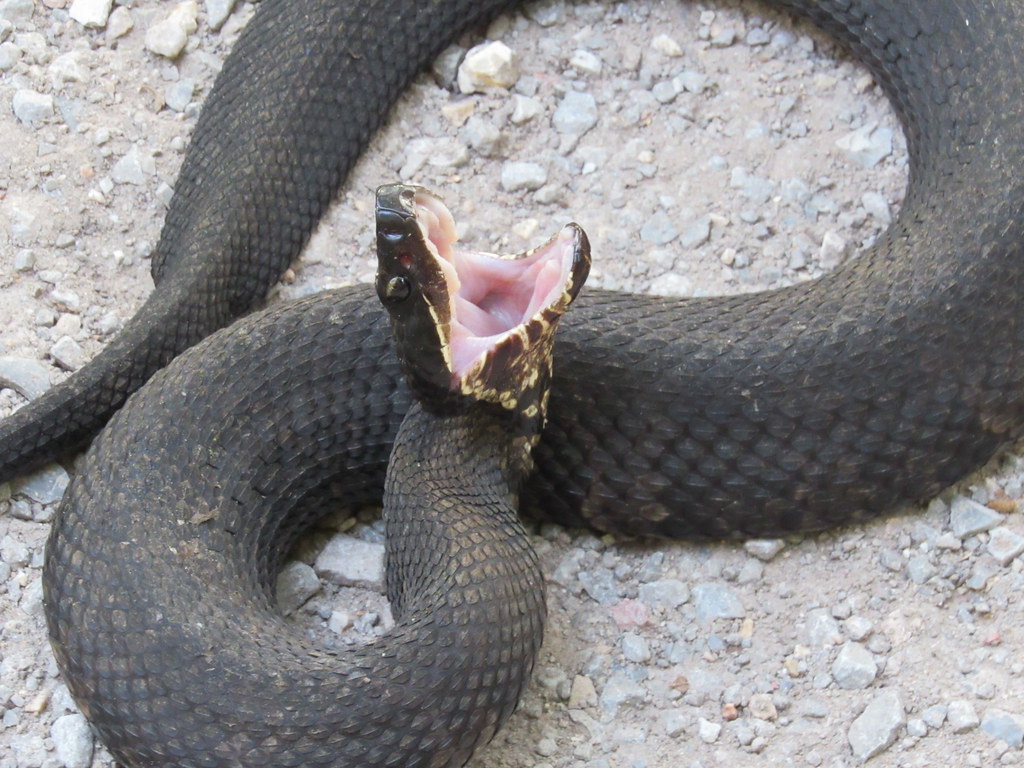 This open mouth, the whitish lining deriving the name “cottonmouth”, shows the fangs very well- which is the idea.  Cottonmouths have potent-enough venom to kill a human.  While that happens rarely, amputations and extremely costly medical bills are also known side effects.  Thankfully, almost all they do is bluff- you’d have to get within striking range (half the snakes’s body length, though I give it more) or handle one (illegal here, and it should be illegal everywhere).  Almost all bites are the result of someone trying to catch or kill the snake.   Cottonmouths are fascinating, but it’s a fascination that comes with serious respect and a little bit of personal space.

Notice how thick the body is.  One feature that distinguishes a Cottonmouth is its incredibly thick body.  The very angular head, usually held up at a steep angle, is another ID feature.  Cottonmouths are pit vipers, having sunken “pits” behind their nostrils, containing heat-sensing organs for detecting prey.  Rattlesnakes and Copperheads are also pit vipers. 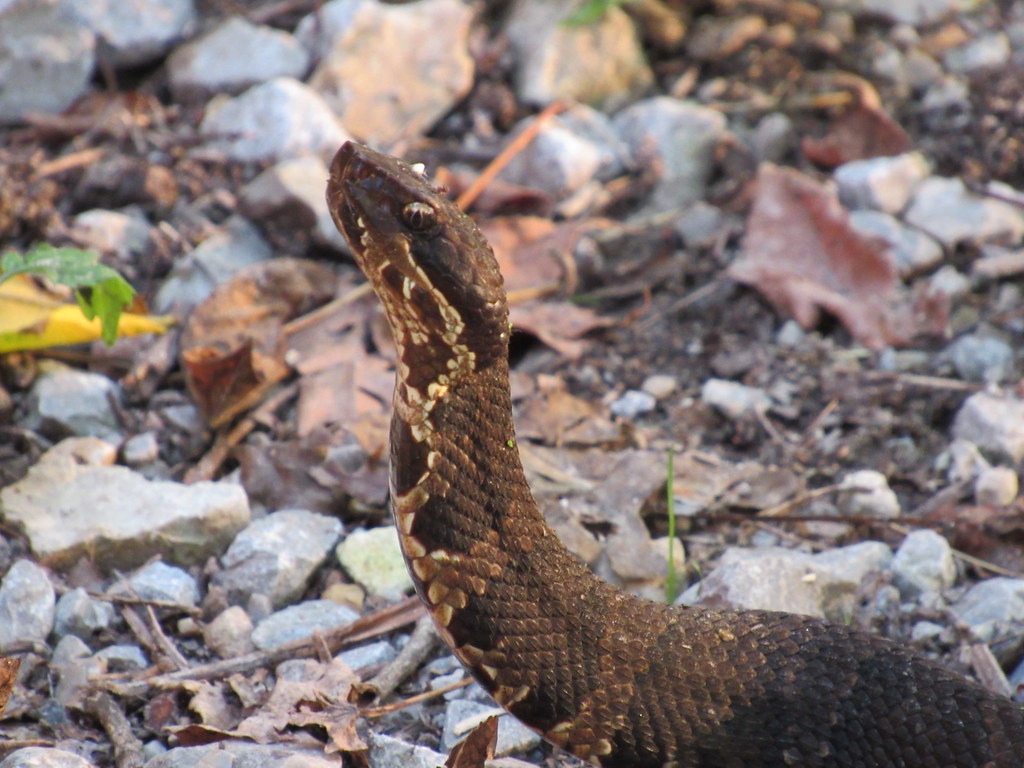 It is said that Cottonmouths chase and attack people.  If that were true, I would be dead.  In fact, they are the laziest snakes I’ve ever seen.  Since Cottonmouths know they have venom glands, they can take all the time they want in crossing a trail, confident in their power. 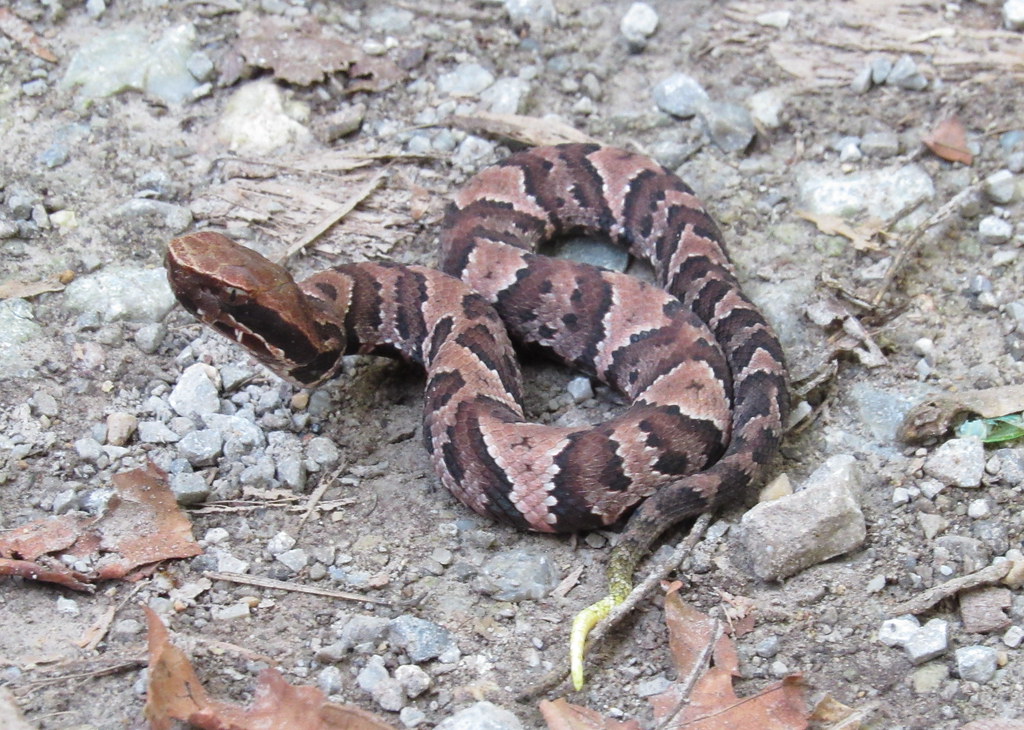 Because of their small, vulnerable size, baby Cottonmouths do not have this luxury and are therefore skittish, albeit with a tendency to only be seen once nearly underfoot. A Cottonmouth this size is referred to as a neonate, as it was just born this year. 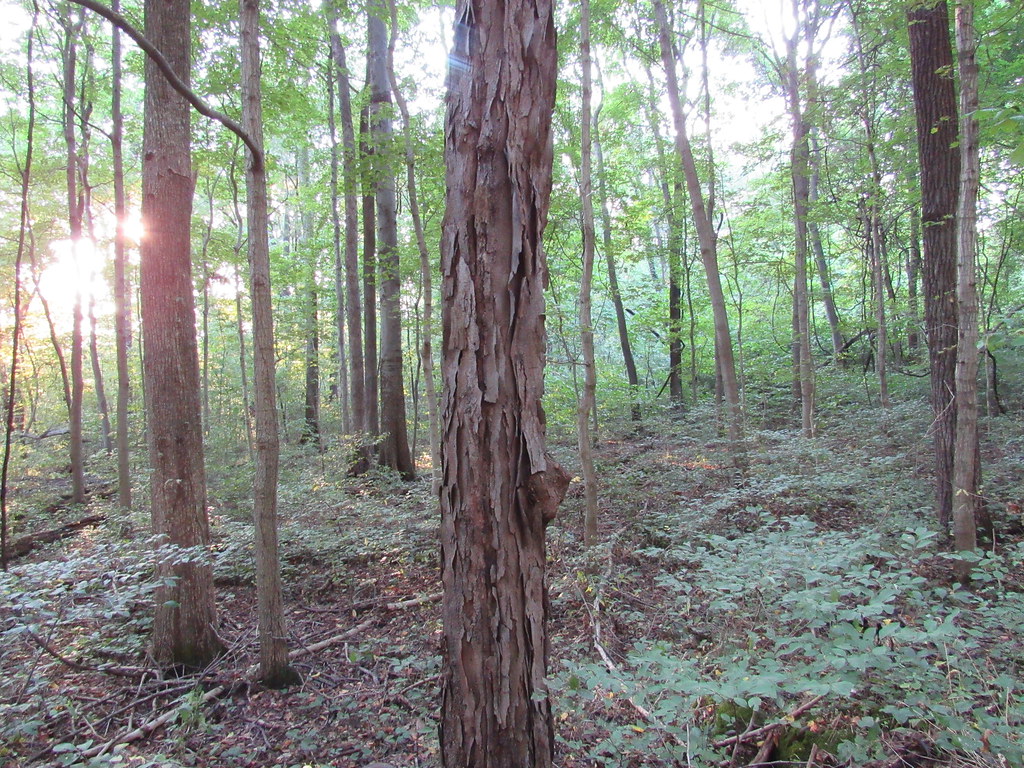 It was hot and humid, and it had rained overnight. I walked down the road, spotting a snake in the distance as it crossed the road. It was too thin for a Cottonmouth, and I had no idea what it was.  In point of fact, it was the last thing I ever thought I’d see… 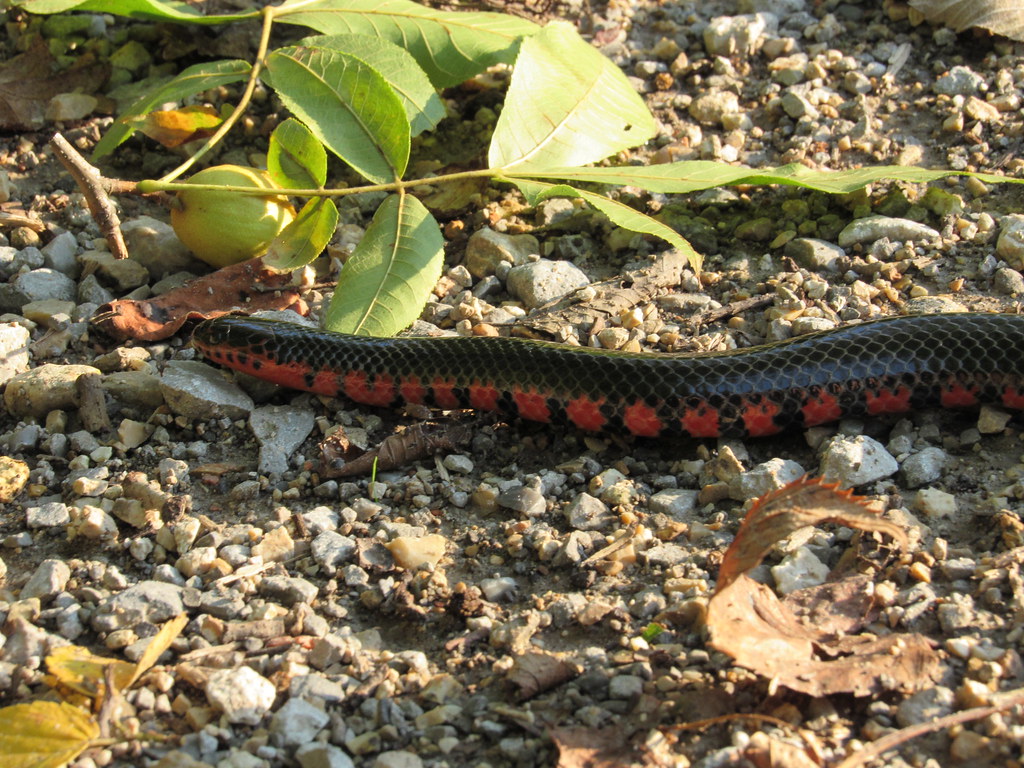 IT’S A MUD SNAKE!!!  The Mud Snake (Farancia abacura) is the “best” species to find at Snake Road, one that most people never see.  I know people who have looked for Mud Snakes here for 20+ years without success- and this is the fifth species I find here (after Copperhead,  Ring-necked Snake, Cottonmouth,and Plain-bellied Watersnake).  Mud Snakes spend the vast majority of their life underwater in a swamp, preying on aquatic salamanders.  To see one on land anywhere is great.  To see one on Snake Road itself is nearly a miracle. 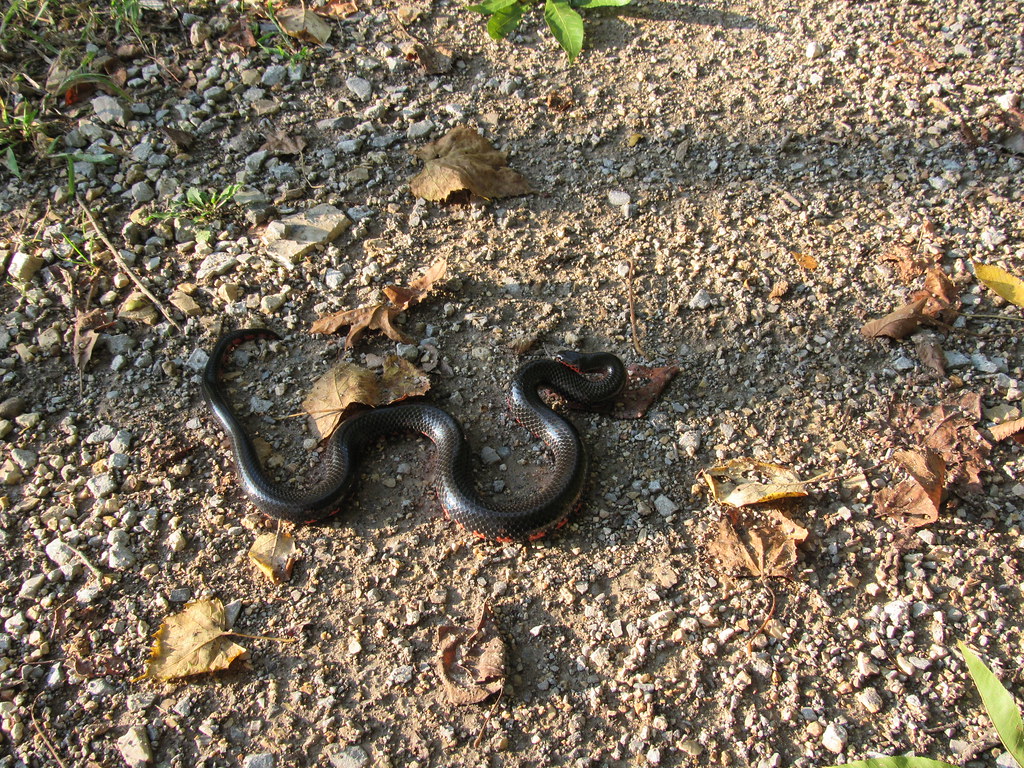 Despite what I’ve just said, Mud Snakes are not considered rare in population- they just live a life cycle that renders them almost completely hidden from humans.  They’re not small either- an old Mud Snake in the right habitat can be over four feet long.  This one was three feet or so in length.  I recorded a video almost as soon as I found the snake.  It’s mostly a reaction video, but enjoy: 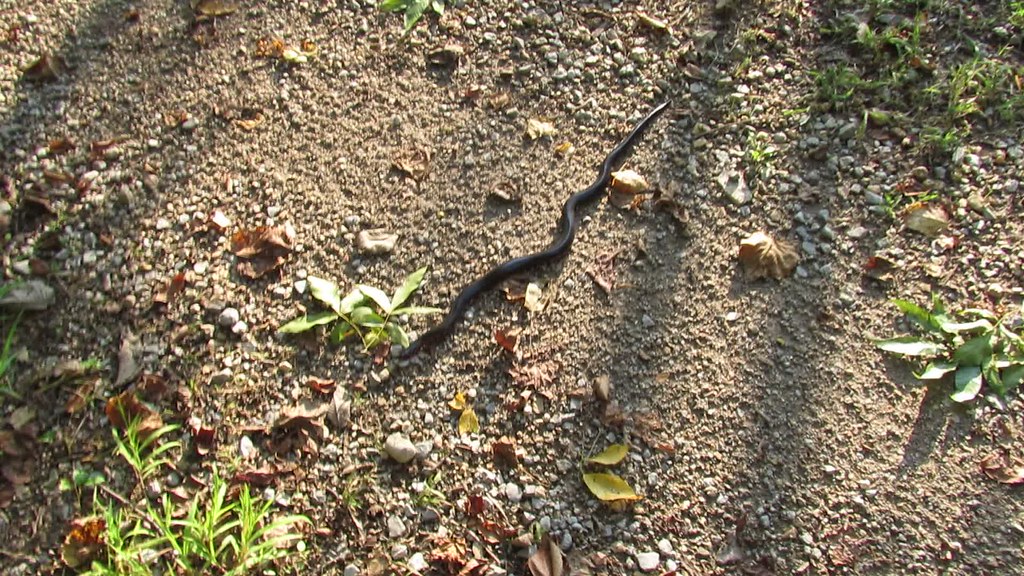 Right after this, the snake curled up, lashed out at me, and then it slithered away back into the swamp.  I then walked onwards, scaring up a Barred Owl along the way, though it vanished into the trees without a photo.  It was about ten or fifteen minutes later that I ran into someone herping. The man I met had been looking for Mud Snakes for ten years, and it was the only Illinois native snake species he had not seen in Illinois.  That man was very disappointed. 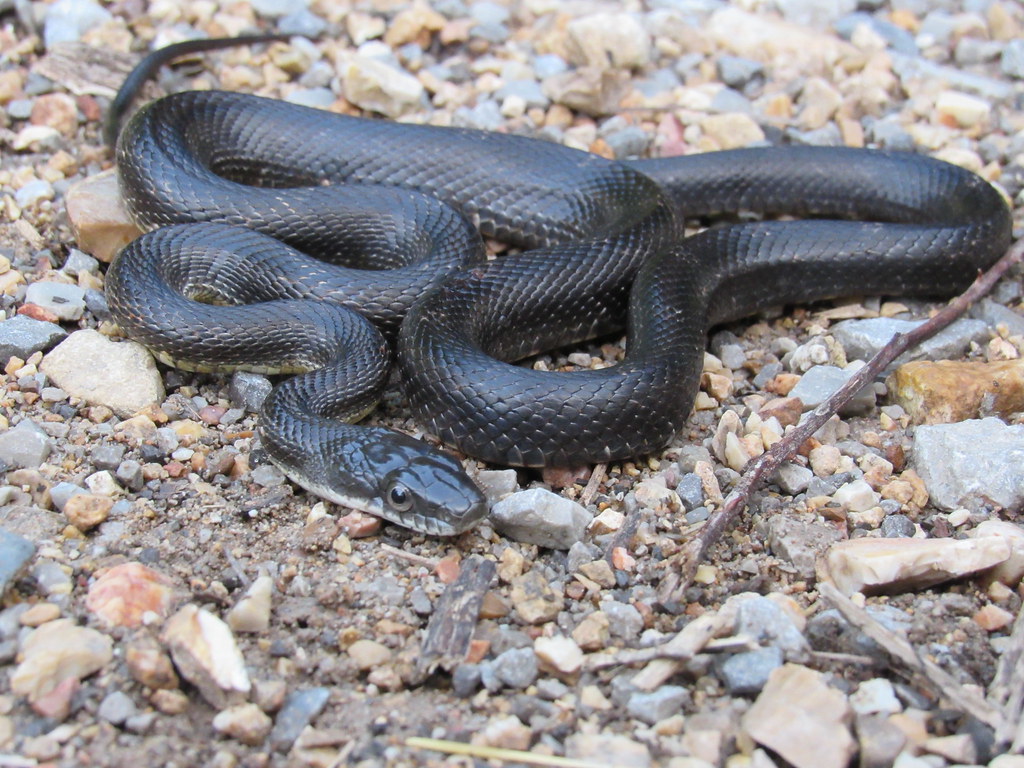 However, he did find me my first Snake Road Black/Grey Rat Snake, an animal for which there is essentially no  good scientific name.  (It’s changed five or six times since 2000, and I’m waiting it out to see what scientific name sticks.)  Because the scientific name changed, scientists insist that the common name must also change from Black Rat Snake to Grey Rat Snake- despite it being black (the lighting above makes it appear more grey, but it was black).  That is, unless it’s on the other side of the Mississippi River, where it is now a Western Rat Snake automatically.  Snakes can swim large bodies of water, including this species… more data is needed.

Whatever you call it, this is one of the more common snakes throughout the Shawnee National Forest.   A day later, while surveying plants for a botany lab, a member of our class came across this one, and after releasing it at the base of a tree we watched it climb, and I took a video.  Black Rat Snakes have impressive climbing skills, especially for animals with no limbs!

Video does have some language. 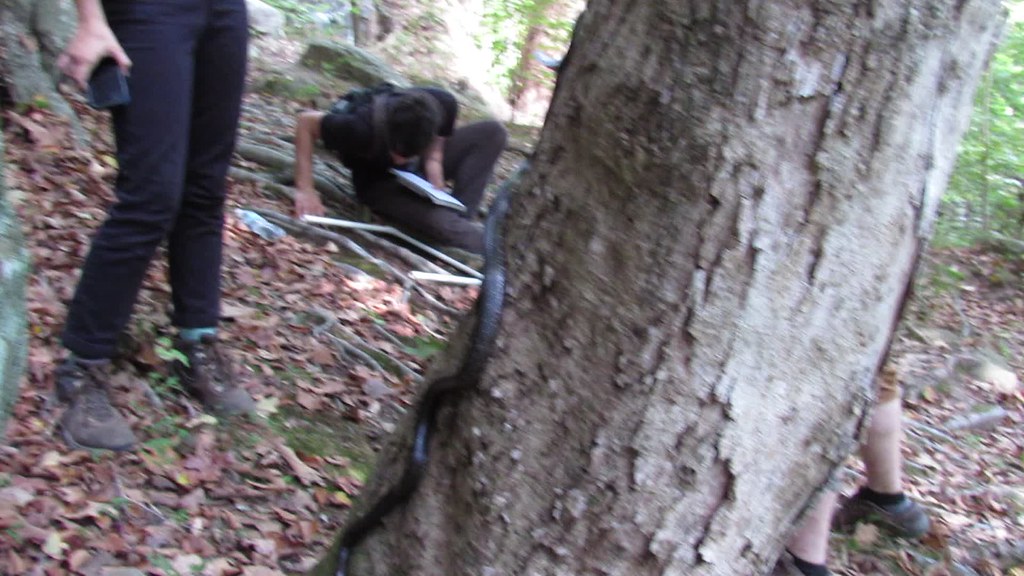 Now that I’ve demonstrated the climbing skills of the Black Rat Snake, I will mention that the Black Rat Snake photographed at Snake Road, in order to get away from the herper who found it, decided to climb up my legs.  In defense for its lack of wisdom, I was standing still and taking photos, at least until it tried to go up my shorts.  There are limits to what I’ll put up with from a wild animal, and the snake was set on the side of the road, where it vanished into the grass.

I ran into another guy, and we decided to check the cliffs.  We found no snakes, but a State-Threatened Bird-voiced Treefrog  (Hyla avivoca) was a lifer for me.  These are only found in a few swamps in Southern Illinois, the northern edge of their range, though they are much more common further south: 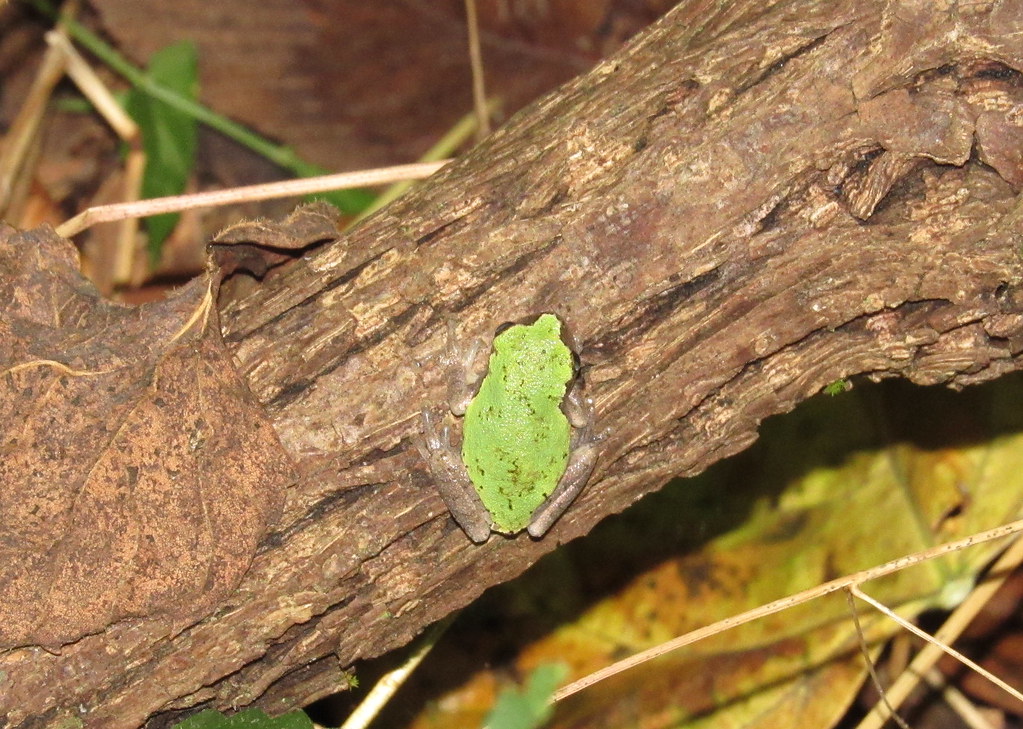 A spectacular sunset is  the perfect way to end a spectacular day.  However I settled for this moderately good one. Nothing was going to top that Mud Snake, anyway. 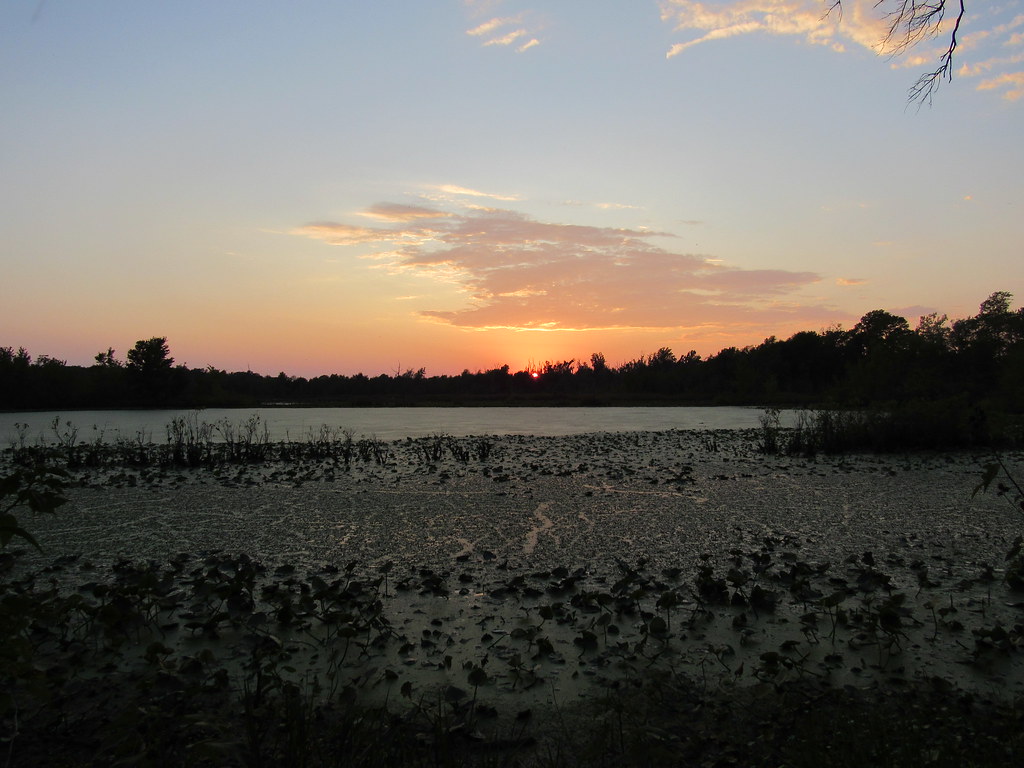